Structure Decks are built to give duelists the best chance at strategizing a winning play. They are the most inexpensive way of getting a deck together that’s strong and effective. The best way to work with Structure Decks is to buy three of the deck that you want; this will give you enough cards to build a well-balanced deck with the better cards from the pre-made Structure Decks.

For the duelist who wants to run a Blue-Eyes deck without the effort.

Like all Structure Decks, you can play the Blue-Eyes deck straight out of the box if you’re a beginner, but there are a few changes you might want to make after you’ve played with it a few times.

If you’re looking to make it difficult for your opponent by constantly banishing their monsters, this deck is for you.

The Rise of the True Dragons Structure Deck, as you may have guessed, comes with a lot of Dragon Monster cards. Perfect for collectors and anyone looking for a decent dragon-themed deck. This deck is well-balanced and strong even without any customizing that more experienced duelists might test out later on.

Most of the cards will help you with Summoning, banishing your opponent’s monsters, as well as cards that work well with other LIGHT attribute cards. It’s already a well-rounded deck by itself, and it’s pretty consistent for good draws.

A Structure Deck for Spellcaster fans who want a few powerhouses and a simple deck.

This deck is easy to master. The aim of this deck’s strategy is to gather up your Spell Counters and protect your own side of the field. You do this for the benefit of the card Magical Citadel of Endymion, which will allow you to destroy cards on your opponent’s field.

Magical Citadel of Endymion was reprinted for this particular Structure Deck, which makes it a good buy for any collectors out there. This is the only deck that the card was reprinted in. Alongside this card, Endymion, the Master Magician is this deck’s foil-wrapped card; making it a rare card to have in your collection. Note: Rare cards in decks come foil-wrapped. 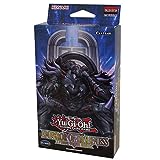 If you’re looking for a deck that’s all about Tribute Summoning, you’ve found it.

This Structure Deck plays like the older version of Yu-Gi-Oh! The Trading Card Game, back before fusions became more complex and the game started coming out with new cards several times a year. This deck uses Spell and Trap cards to support your Monster cards while you’re gearing up for a Tribute Summon or two.

This deck works great for competitive and fun matches, and it emphasizes not using the Extra Deck which you can put alongside your standard deck for XYZ, Synchro, and other Fusion Monster cards.

For a Structure Deck that needs minimal customization and is great to strategize with.

Based on Yu-Gi-Oh! GX’s own Zane Truesdale, the Cyber Dragon Revolution deck is ready to play straight away. However, if you’re up for making a few changes, then adding in another Cyber Nova Dragon, a Cyber End Dragon, and a Chimeratech Overdragon would make this deck pretty much unbeatable.

Strangely enough, this deck also comes with a singular XYZ Monster card, which means a duelist could even start learning a little about XYZ Summoning if they have time. This is a deck that is all about overpowering your enemy and making it extremely difficult for them to win.

A deck of powerful cards for the duelist looking for a start that will blow everything away.

The Realm of Light Structure Deck is one of the best pre-made decks around. If you want a deck that has solid, power-packed cards right from the get-go, then this is the right deck for you. Lightsworn decks are hard to come by, too, which makes this Structure Deck extremely sought after.

The deck also includes a copy of Lightsworn Sanctuary, which is one of the most crucial cards in any Lightsworn deck.

A deck for players that want to grow and adapt as a duelist.

Zombie World is good by itself, but it could benefit from a little help. If you’re a new duelist who is looking to invest in improving, then this Structure Deck will give you a decent start.

For a solid introduction to Synchro Monsters, this Structure Deck is perfect.

Synchron Extreme is a deck that was inspired by the protagonist of Yu-Gi-Oh! 5Ds. The deck will help any budding duelist learn the ropes of Synchro Summoning without confusing them. This deck also includes two Ultra Rare cards, among some other great and memorable cards from Yusei Fudo’s own deck.

If you’re a duelist looking to start powering up your deck with modern dueling, this is a good choice.

For the duelist who wants a deck of classic cards to introduce them to the game.

Last on our list; we have the Machine Reactor Structure Deck. There are some great cards in this pre-made deck; such as several Rare cards, and an Ancient Gear Token. This deck only came out in 2017, so it’s still relatively recent, but the cards are actually very similar to some you may have seen from Yu-Gi-Oh! GX.

The Machine Reactor deck is based on the Ancient Gear theme, but it’s been made a little bit more modern for newer duelists.

What is Structure Deck Yugioh?

A structure deck are pre-built decks that are centered around a theme or strategy. They are playable straight out of the box and suit more intermediate players who are familiar with the game.

Structure decks are good and compared to other card games they are very cheap.

How much is a Yugioh Structure Deck?

Strucutre decks cost more than starter decks and can cost anywhere between $10 - $30.