Factorio is a complex and multifaceted game that provides players with countless hours of gameplay even in its unmodded state.

However, the game’s been out a fair while now, and we’ve already got a fair number of Factorio veterans out there who are looking to add some extra layers to their factory-building experience.

And given the game’s active community, there’s plenty of modders out there only too happy to oblige.

Below, we’ve listed twelve of our favorite user-made Factorio mods.

With the AAI Signal Transmission mod, however, this becomes possible! With this mod, you can send transmission signals to different planets because the mod removes distance limitations.

All you need to do is unlock the signal transmission technology in-game and place your transmitter and receiver. Both must have access to power at all times to work.

Also, multiple transmitters can be placed on the same channel, and their signals will be added together. 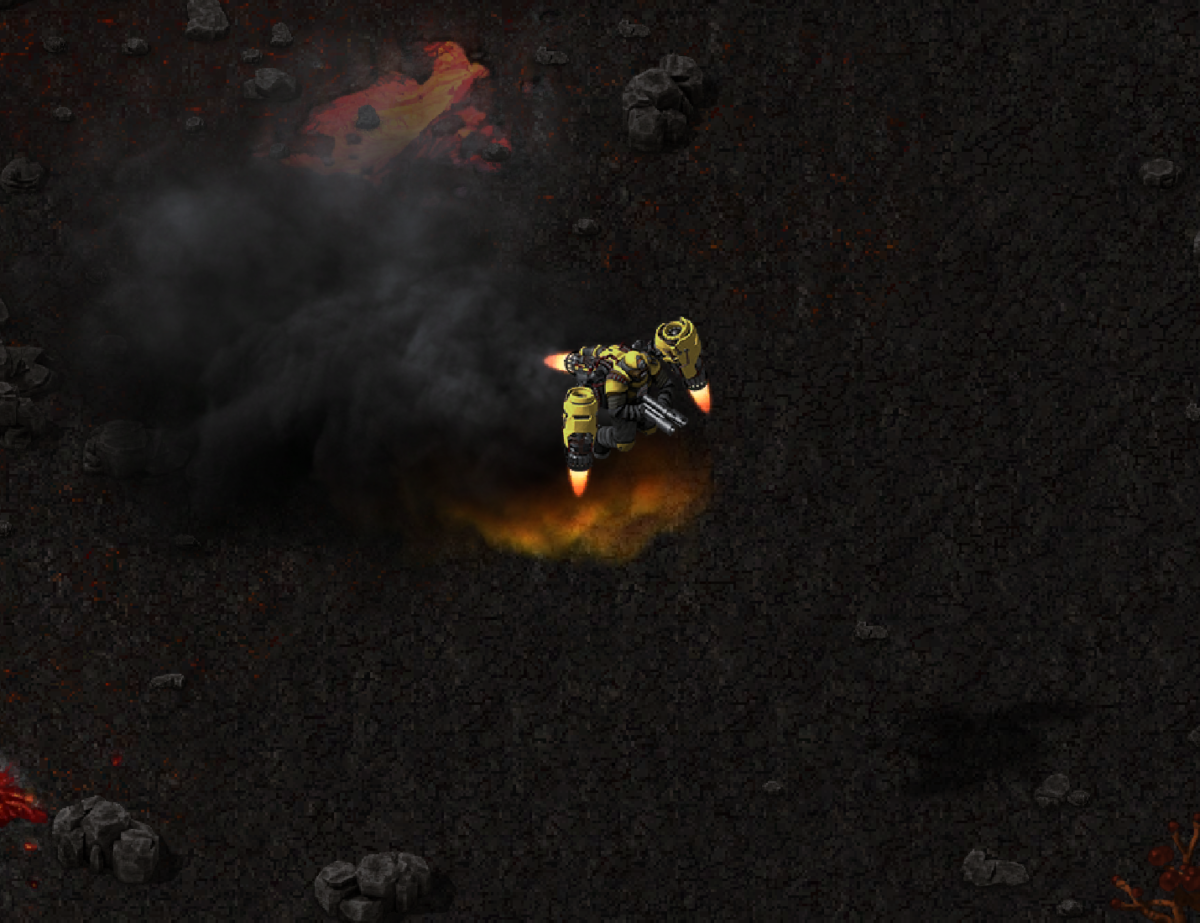 Fast travel is a common place feature in video games today because majority of players don’t want to spend hours of real-time walking in a game. The same reality is true in Factorio!

With the Jetpack mod, you will be able to build jetpack equipment and use the jetpack to travel at high speeds around the map. With a jetpack, you can also fly over buildings and water!

There are four tiers of jetpacks featured in this mod, each increasing with speed as you upgrade.

You can also stack jetpack equipment onto the same pieces of armor, also increasing your overall speed.

Nothing is more confusing than when you download a bunch of mods, only to not understand half of them. That’s where Informatron comes in!

Informatron is a mod that makes referencing other mod instructions much easier by compiling all the information into a reference log in the game itself.

With this mod, you will no longer need to minimize your game in order to read a mods instruction.

This is a small mod, but one that can at least decrease frustration when experimenting with other Factorio mods.

It’s a minor audio tweak that really helps enhance the game’s audiovisual immersion and further the feeling of being in the middle of your own self-made industrial complex. 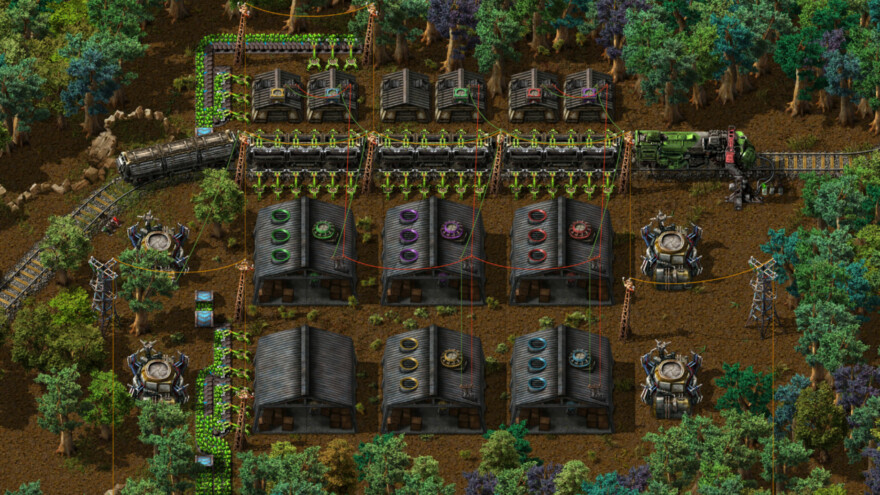 Once your factory really gets going, chances are you’ll build up a whole lot of extra items in the manufacturing process.

The Warehousing mod, well, lets you make warehouses – both 6×6 and 3×3 options are available.

It’s both a nifty bit of realism (most factories have at least one warehouse on hand, after all) and a very useful way to keep things from getting cluttered. 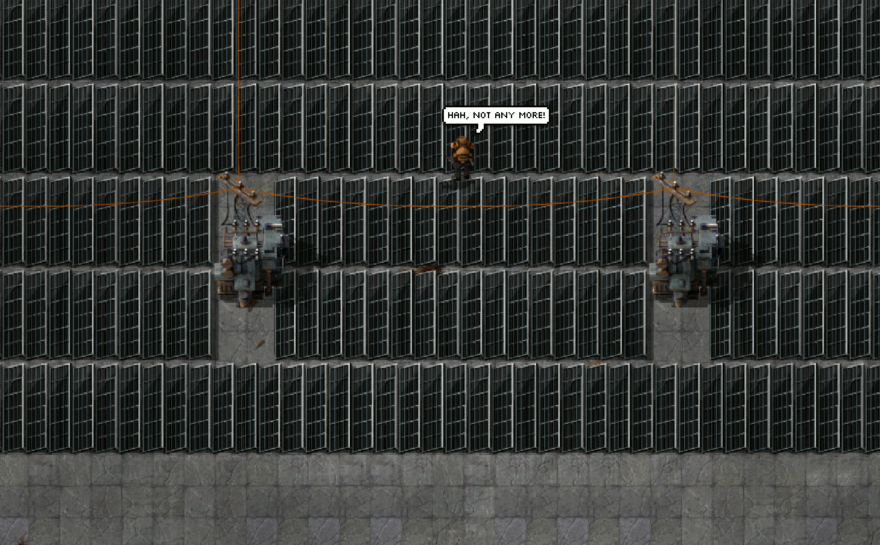 Once you’ve really got your factory underway, chances are the various structures are going to be very tightly packed together.

It’s necessary for efficiency, but it can lead to the rather convenient issue of having to inconveniently roundabout approaches whenever you want to navigate through your factory.

The Squeak Through mod allows you to squeeze your way through various tightly-packed structures that would generally be impassable, simply by reducing their collision boxes slightly.

It’s a simple tweak that can nonetheless save you a whole lot of time and inconvenience when making your way through your growing factory. 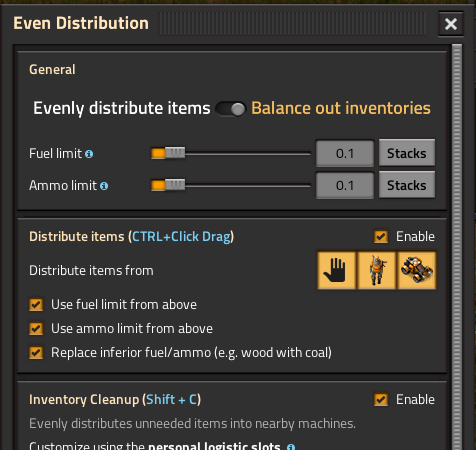 Even Distribution is another mod designed to make the factory management and maintenance process a tad more efficient.

With this mod, players can distribute resources across buildings far more easily.

One needs simply select an item, hold the CTRL-key, and drag it over multiple buildings. This will evenly distribute all (or, if you right-click, half) of the selected resources across all the selected buildings.

With it, you won’t have to painstakingly drag and drop the resources equally into each machine or container, and you won’t end up with a bunch of machines or containers with no resources.

Not only does it save you a bucket of time, but it also makes the whole experience of playing that much more fun. 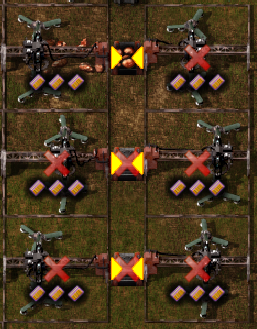 The Auto-Deconstruct mod is similar to the Bottleneck, in that it’s a minor tweak that can be tremendously helpful with making the incidental aspects of factory maintenance more efficient.

In this case, the mod marks out drills that have run out of resources to mine, and which can thus be deconstructed.

It can save the player a great deal of time that might otherwise be spent carefully checking each drill to see which ones are out of resources.

Those few moments can make a world of difference when it comes to running an efficient factory. 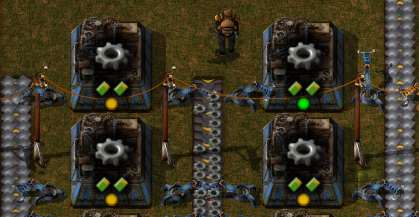 Once your factory gets big enough, it can get rather tough to track all the bits and pieces’ functionality.

Unfortunately, enough faulty apparatuses can grind production to a halt; and once that happens, having to hunt down the exact source of the problem can be a serious time-sink.

The simple Bottleneck mod adds a light to various apparatuses, such as assembling machines and mining drills.

The light indicates the functionality of all the apparatuses – green if it’s functioning properly, yellow if it’s halted by the output, and red if the input halts it.

If you’re okay with the extra assistance, it can really help identify hiccups in the production process.

Factorio is a thoroughly engaging game to those with a taste for construction and management, to be sure.

Once you’ve played through it enough times, however, certain aspects of the factory building and maintenance process can start to feel a little slow or tedious.

With the Speed Control mod, you can increase the game’s speed at will (and, when necessary, you can slow it too), all with simple hotkeys.

It’s handy as can be, and it helps keep the game fresh, even after multiple playthroughs, by letting you hasten through the slower portions.

As mentioned, gathering resources is a major part of Factorio. The Resource Spawner Overhaul mod polishes this particular part of the experience by revamping the way that the game, well, spawns resources.

With this mod, resources feel a lot less scattered and patchy. The mod ensures that each square in the map grid has resources in it, and makes the ore patches much larger and more regular, which is, of course, a nifty bit of extra realism.

This also means you’ll have to travel a fair bit father to gather your resources, which is actually quite handy.

One of the common complaints about the original game is that the player rarely needed to expand very far, meaning that trains weren’t as necessary as they should be.

Overall, this mod really makes the alien world of Factorio feel just that much more organic and real. 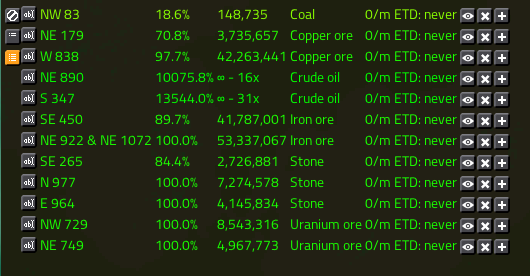 Chances are, before long, you’ll have a great number of mining sites operating in Factorio.

Between that and all the factory maintenance, keeping track of it all can get rather tricky. That’s where mods like the YARM Resource Monitor come in so handy.

This mod keeps track of all your mining sites, keeping track of where they are, their current status, and what’s being mined.

You can choose to keep all the sites onscreen at once, or just the ones that are about to expire. It’s way less time spent having to check up on each mine’s status individually, and thus more time to enhance productivity.

Alien Biomes isn’t one of Bob’s mods, but it follows much the same spirit: it takes what the game offers and adds more of it.

In this case, it’s more alien biomes. The mod adds some volcanic landscapes, some snowy landscapes, various shades of grass – basically, it makes the extra-terrestrial landscape you’re building your factory on feeling a bit more varied.

It doesn’t impact gameplay much, but no game isn’t improved with more varied backdrops.

The user Bobingabout has become a bit of an icon in the Factoriomodding community, creating a succession of modpacks that massively expand the game. They’re intended to be played together and feel more like DLC than simple mods.

They add new ores, new structures, new tools, and new weapons. Basically, once you feel you’ve grown properly familiar with what the vanilla game has to offer, it’s worth it to throw in some of Bob’s modpacks.

The game will, for the most part, remain the same game you’ve enjoyed so far; it’ll just have more stuff.

This is one of those mods for modders. If you play Factorio, chances are good you like building stuff.

And if that’s the case, well, then you’re probably at least somewhat intrigued by the concept of constructing your own mods to personally enhance your experience.

The Factorio Standard Library, in brief, is a collection of tools and utilities for modders, all designed to make the process of moddingFactorio a bit more accessible.

ROFL "best" is very relative. - AAI Signal Transmission: nice graphic but too big, there are better alternatives - Jetpack: usage too cumbersome - Informatron: you don't choose it, it's a dependency - Honk: unnecessary - Speed Control: there are better mods for speed control