Minecraft skins are the player’s own way of showing off their unique character design. As a player, it gives you a lot more room for imagination for what you want your character to look like in the Minecraft world.

There are plenty of skins on the web that are all based on either the creator’s mind or a popular character.

With so many new Minecraft players, having a skin that’s unique and true to you is one of the most important things.

In this article, we will be going through 18 of the most fun and trendy Minecraft skins. 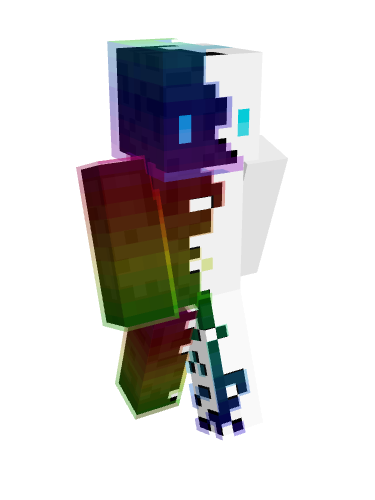 The next skin is the Duo Skin. It shows the character is split into two different parts, with a white and a colorful side.

Your character looks entirely different from either side – which makes this skin so interesting! It’s very popular, and a lot of players have been seen using it.

It is a pretty interesting concept. Makes you wonder if you could take two of your favorite skins and use them both in making a single skin following the same concept as the Duo Skin – interesting, right? 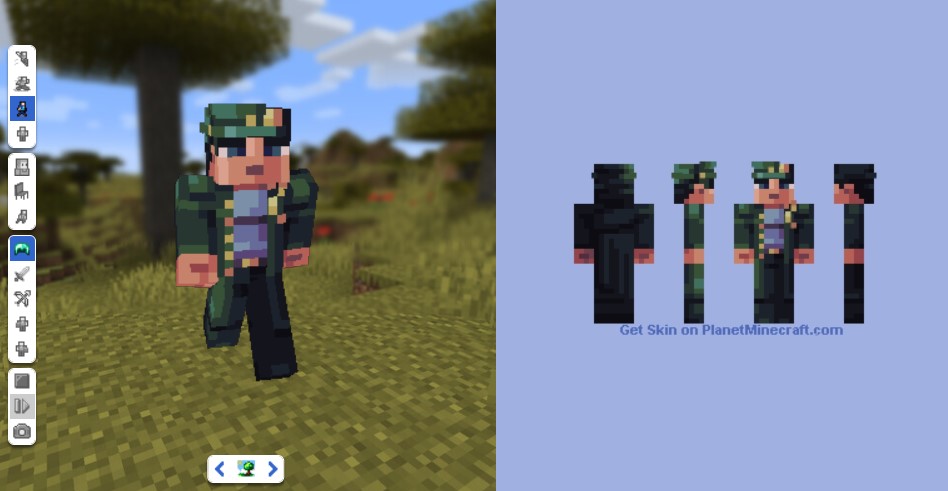 The JotaroKujoskin is based on the character JotaroKujo from Jojo’s Bizarre Adventures.

The skin is created by Auri and has over 4000 views and more than 300 downloads. It is an eye-catching skin that shows your character in green clothes and a green military cap.

There are other tiny details such as the golden bits that imitate the golden chain and button on Jotaro’s coat.

For a fan of Jojo’s Bizarre Adventures, catching on to these details wouldn’t be much of a challenge. 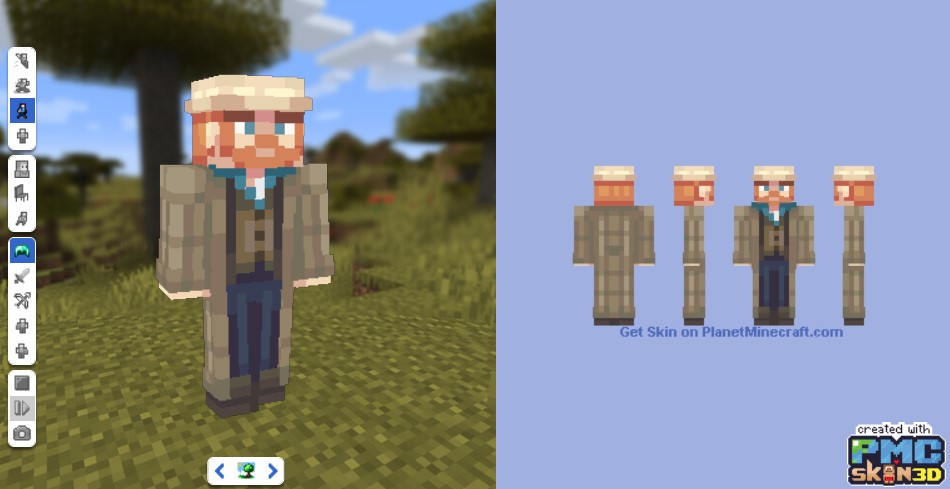 Any Dr. Who fans here? If so, this one is for you guys! The Van Gogh skin gives you a very cool Vincent Van Gogh look.

It has a design based on the depiction of Van Gogh, as portrayed in Dr. Who.

You get a very eye-catching, hat-wearing, nicely dressed imitation of Van Gogh as you go around creating your very own masterpieces in Minecraft. 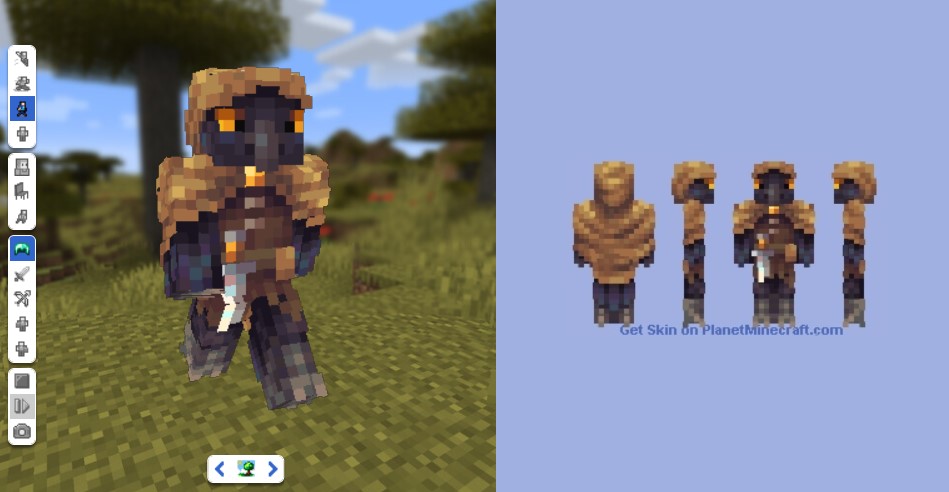 Inspired by the race of bird-like people in Dungeons and Dragons, the Kenku Rogue skin was made as a part of the medieval times Minecraft skin contest. It gives you a feathery texture and glowy golden eyes like a bird.

If you’re in an environment with a lot of trees or greens, you will blend just right in. With over 11,000 views and 900+ downloads, it’s easily one of the more popular skins. 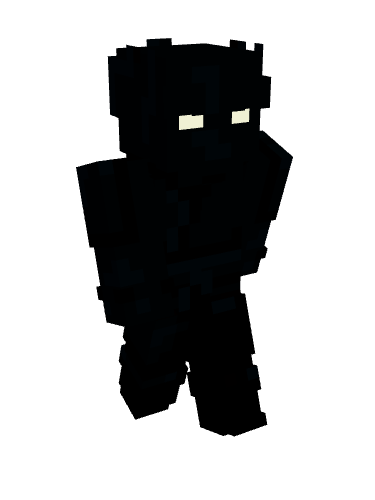 Are you looking for some stealth or possibly creepy vibes? This all-black skin is just as it sounds – all black.

It’s entirely dark from tip to toe except for the eyes, which are bright white. Even though the skin has just one color, different layers can be used to add more detail to this skin.

All in all, it’s a very cool looking skin, and to me, it sort of looks like Black Noir from The Boys. 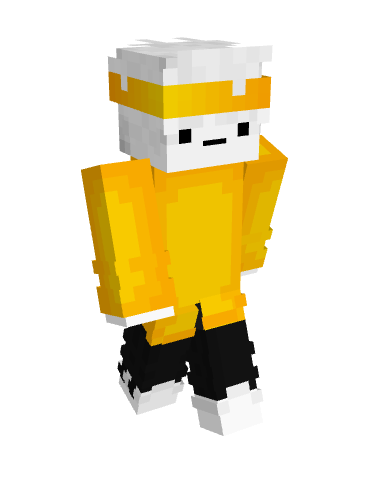 The Yellow and White skin sounds pretty simple, but it was trending on top for a whole week when it came out.

This simple yet fun and beautiful skin is a white-colored character wearing a long yellow shirt, black pants and oh, and a yellow headband.

This guy has a cool hairstyle too, and a poker face – so you can never tell what a person with this skin is up to. 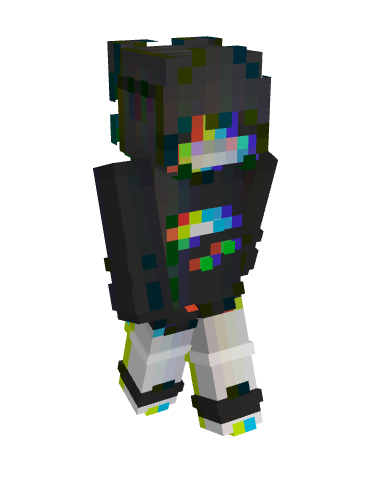 The VHS glitch girl is one of the most interesting skins. It looks like the character is in a VHS video with the 3D effect and everything.

She’s wearing a black top with white pants and black shoes, whereas her face and probably the shirt’s logo are glitching in a VHS fashion.

Since this skin concept is so creative, it makes it very popular, and hence, there are hundreds of people who use this skin. 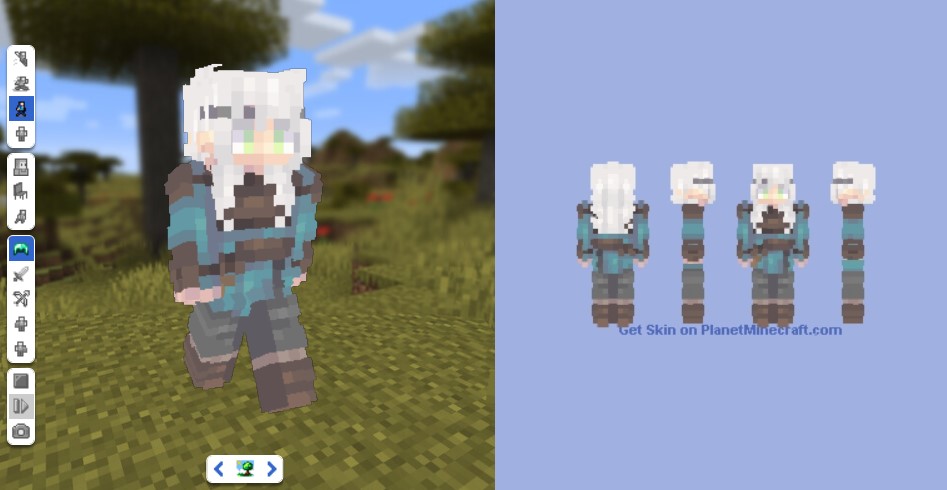 Into elves? This skin is designed after a silver-haired elf and is named Nora. Nora has a medieval adventurer outfit, green eyes, and hopefully, pointy ears under her silver hair.

Having skin like Nora surely puts you in the adventurous mood and makes you want to just set out and explore the unknown.

This skin was also designed during the Medieval Times Minecraft Skin Contest. Its adventurer/explorer vibe makes it a popular skin among players that like to go on an adventure. 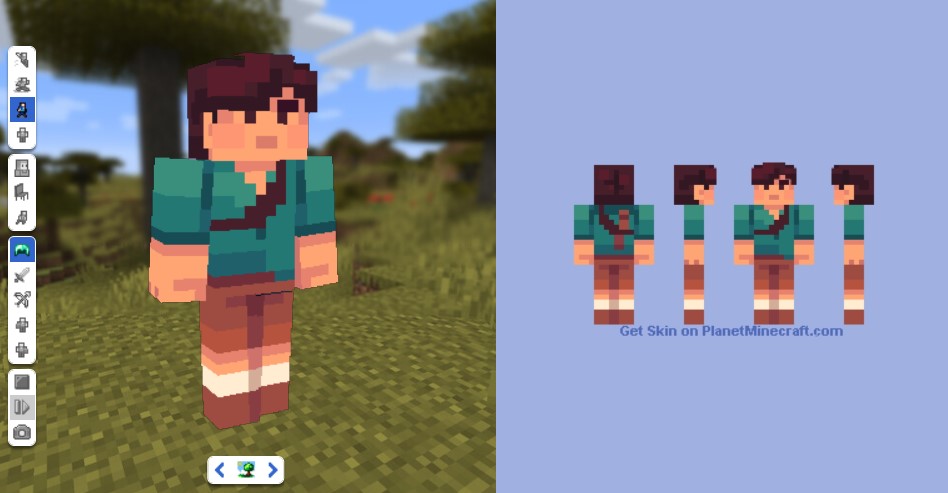 Created by Crescendo, this skin is their version of Steve for their skin pack ‘Allegro.’

Seeing different versions of Steve and Alex skins is always a delight as you get to see the vast imagination the creator has to simply use the same character for so many versatile designs.

This particular skin is very fun to have as it also has that explorer vibe. 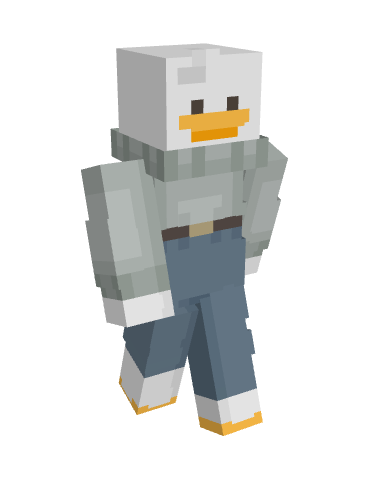 Going forward, we have the chicken skin – because, why not? And that’s not all. The chicken is in sweaters and jeans, apparently.

It’s pretty amazing, actually. It makes you think about how creative and versatile Minecraft players are.

I mean, where else would you expect to see a chicken wearing a turtleneck and high-waisted jeans? The guy could easily land a job as a model – or he could be your new skin.

To check out the skin, visit the link given in the skin title. 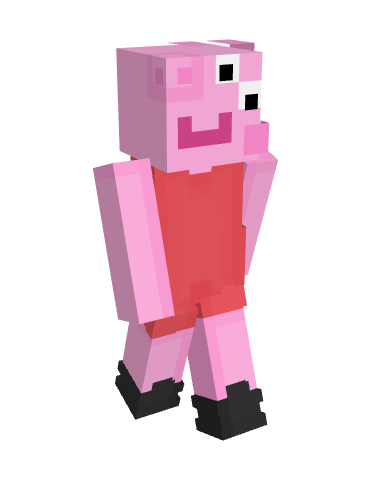 This one – well, I guess some of you might like it. I like it because of how different it is from many of the other skins. It is basically just a scuffed Peppa Pig.

It’s all pink, with an orangish outfit and, of course, comes with Peppa Pig’s face – with both eyes to one side.

Currently, there are more than 2500 people using this skin. 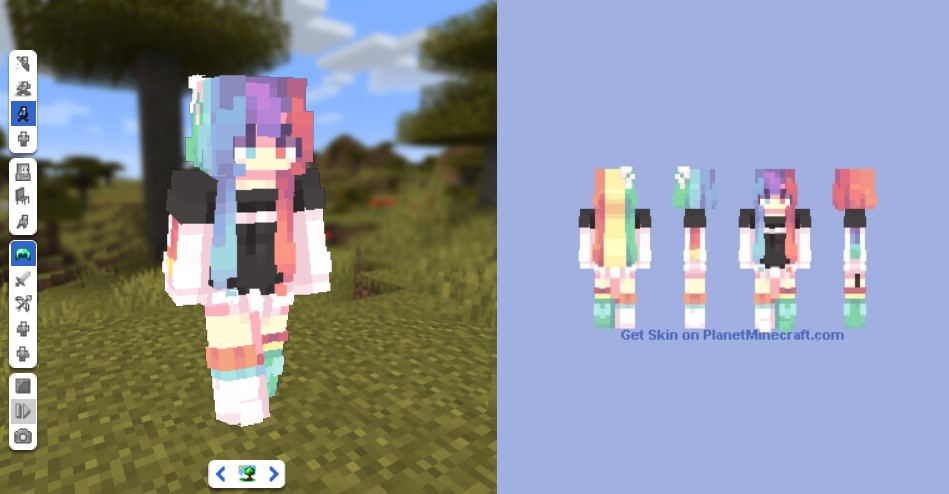 Sometimes you want to be all black or a chicken, but there are times when you just want rainbow hair. This skin gives you exactly that. It’s a cute girl with rainbow hair and is just as colorful as she can get.

Take this skin out in your world, and you will see things in a lot more optimistic and cheerful way.

I mean, I think that is how it’s supposed to be right. This is the creator’s first rainbow skin, and to be honest, they did a pretty awesome job at it. I wonder how their 10th or 20th rainbow skin is going to look like… 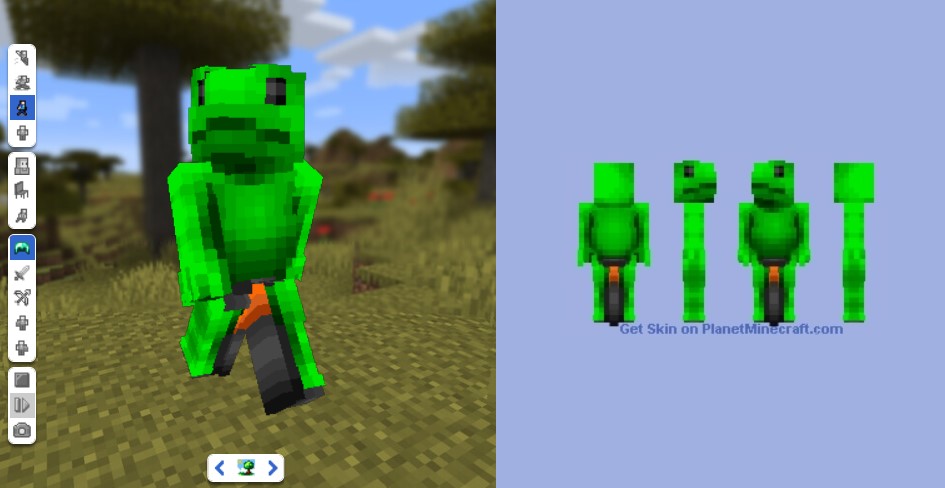 The next skin is the ‘here come datboi‘ skin. If you know, you know. Yeah, the name sounds funny – it looks even funnier. It’s a very cleverly designed frog on a unicycle.

This skin was created for the April Tools Meme Scheme contest and was one of the funniest and interesting skins featured there. If you want to meme around and be funny and have a good laugh, definitely try out this skin. 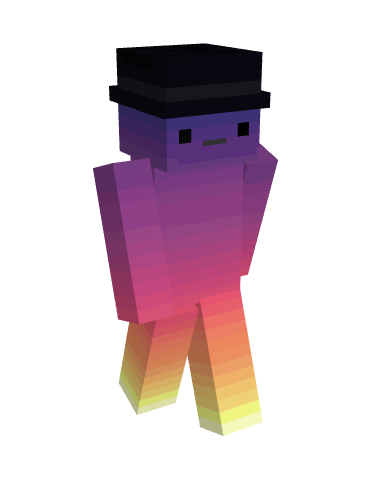 Next up is the Gradient skin. It’s a very simple yet eye-catching skin. It goes from purple at the top to yellow at the bottom. It kind of reminds me of the Instagram logo. But one thing is for sure, it is one of the most unique skins in this list.

Oh, and did I mention that it has a very sophisticated black hat? The gradient paired with the hat makes the skin your go-to if you want to look all classy and serious for your next big mob hunt or something along those lines. 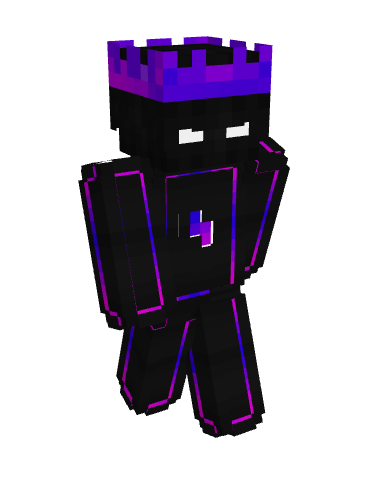 The Crown skin is a popular design that comes with a glorious crown and a black base. This skin comes in many different colors and styles, like a rainbow and others – but this style offers a purple gradient to detail the skin and for the crown.

So yeah, the crown – royal, purple – royal. And he even has mean-looking eyes so that no one can stare directly at his highness.

It’s one of those cool designs that come in the same category as the Gradient skin or the All Black skin. I, for one, am a huge fan of them. 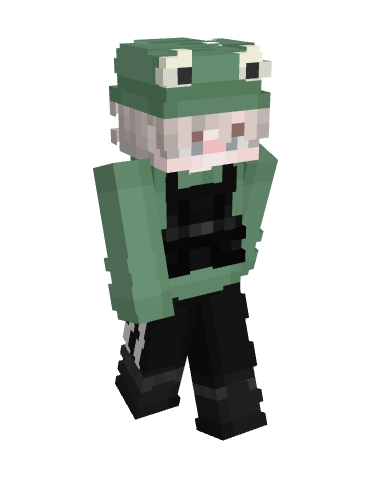 This Frog skin is pretty detailed with your character wearing a Kermit hat. It’s not as frog-like as the ‘datboi’ skin, but it is doing its best. Your character in this skin has a Kermit hat, a green outfit, a black vest on top, and black pants.

The skin even has good details on the facial features, including the eyes and even the hair. It shows a lot of creativity and is a very interesting piece of art.

This skin is surely worthy enough for you to take with you on your exploring, crafting, and fighting mobs. 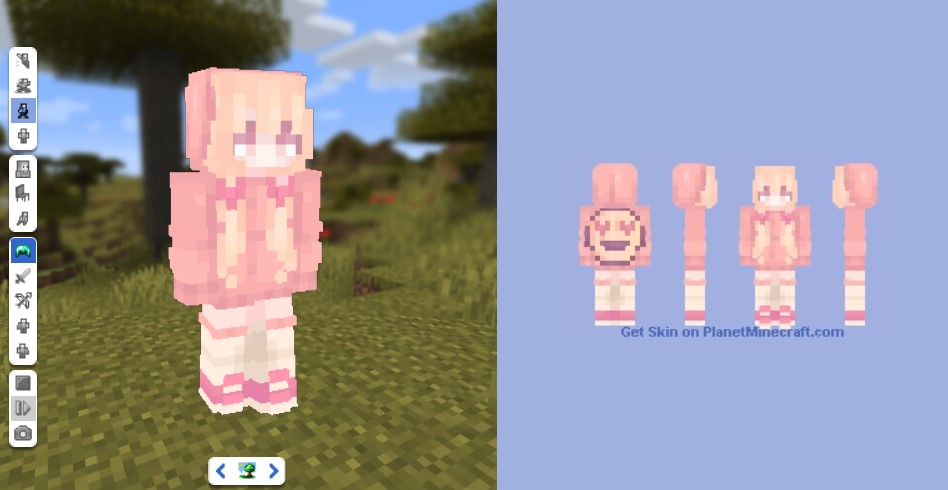 In the mood for something cute? Here’s a nice-looking Emoji skin that features a girl in a pink hoodie. Isn’t that cute?

Well, the creator probably thought, “not enough.” So, they went ahead and added a heart-eyed emoji on the back of the hoodie.

Now every time you come across something adorable and cute, you can express your emotions and just show it the cute heart-eye emoji by turning your back on it and walking away – or, however, you think seems right. 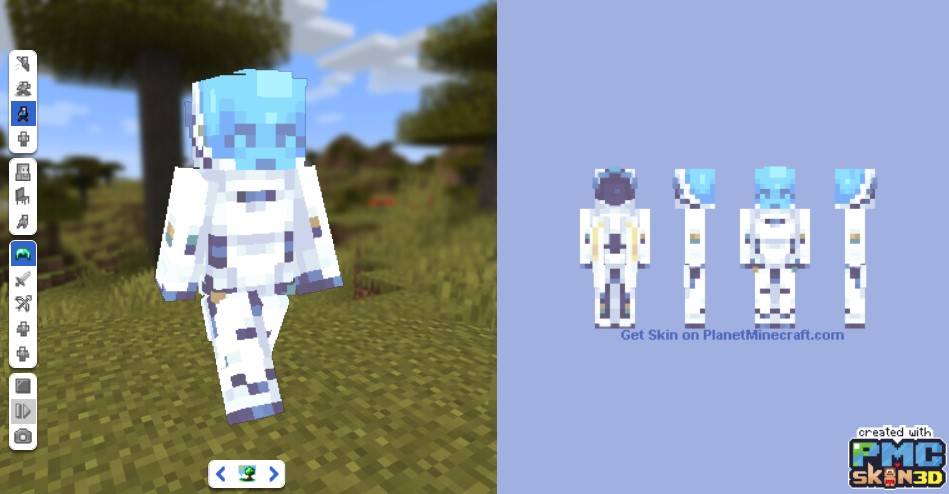 The Echo skin is based on the Overwatch character named Echo. The skin has a lot of detail, which easily tells you what character it is based on if you have seen it before.

The blue skin and hair, along with the white suit with detailing, show how much work went into creating this skin.

Since a new Overwatch character inspires it, there is a lot of chance that Overwatch fans that play Minecraft will be very eager to try this skin out.

You can choose between all of the above and get the skin that suits you the best, whether you are feeling like an adventurous elf or an All Black and all serious player.