We have compiled a list of the best hairline CC and mods available for The Sims 4 that will help to transform any hairstyle you want your Sims to pull off flawlessly! 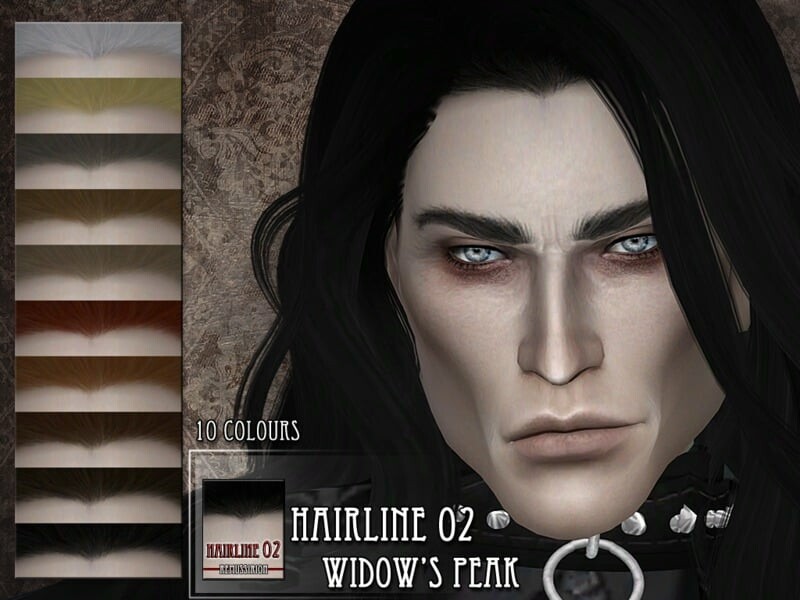 If you are a frequent player of vampire Sim characters, then a widow’s peak hairline is a must-have to achieve that traditional vampire look!

The Widow’s Peak Hairline 02 is the perfect example of what a subtle widow’s peak looks like. This hairline mod is usable by both male and female Sims and comes in 10 color swatches.

The colors for this hairline include black, brown, red, blonde, and grey.

Whether your Sims hair is up or down, this widows peak is a subtle way of adding just a twinge of uniqueness to their face. 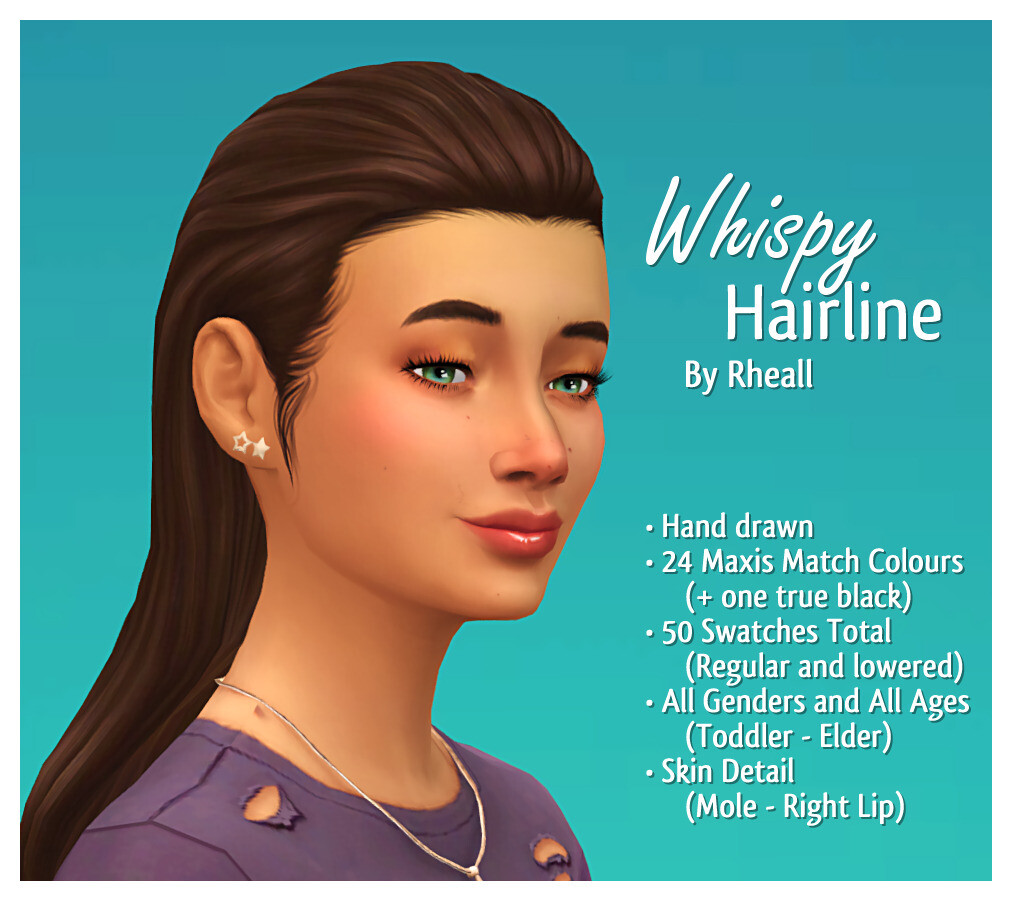 Most people have little hairs that add to the framing of their face. Most Sims also miss this small detail, so the Whispy Hairline is able to help correct that!

The Whispy Hairline mod is a hairline that is hand-drawn and adds important detailing to your Sims face along the hairline.

This hairline mod spreads out from the top of the forehead and down to the line in front of the ears.

This hairline is usable by Sims of all genders and comes 50 total color swatches, including 24 Maxis Match colors. 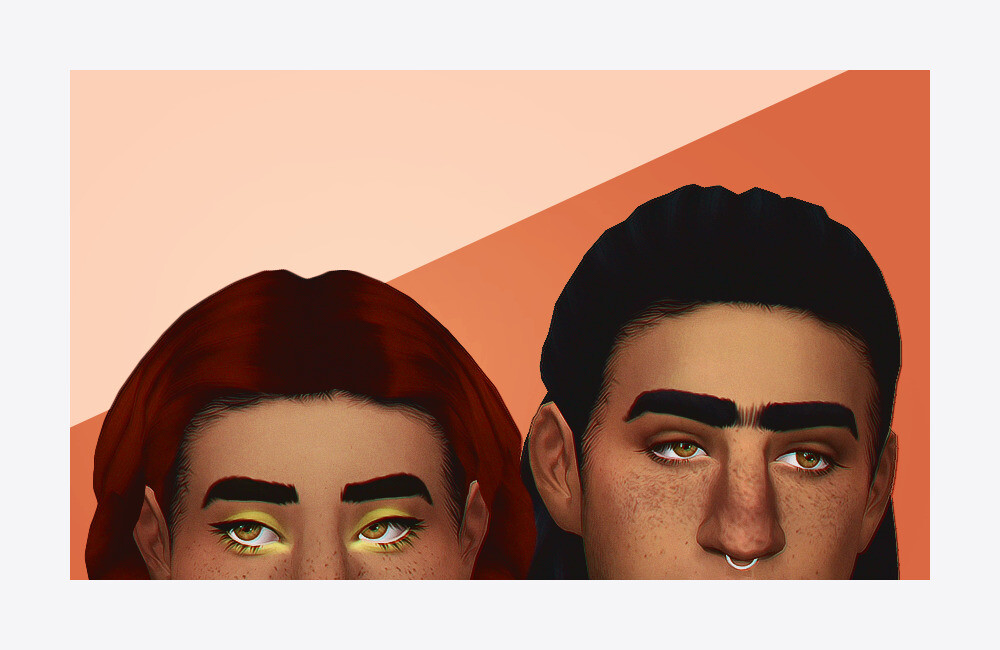 Not all hairlines are perfectly symmetrical or even. The Organic Hairline captures this perfectly, though, by providing your Sim with a hairline that is more realistic because its natural.

The Organic Hairline mod is subtle but adds definition and depth to the hair.

The hairs in this hairline mod are carefully drawn on to appear as if the hair has been pushed back or pushed to the side.

This hairline mod does come in the original Maxis Match colors but also in 11 other colors that include true black shades and different shades of brown and red. 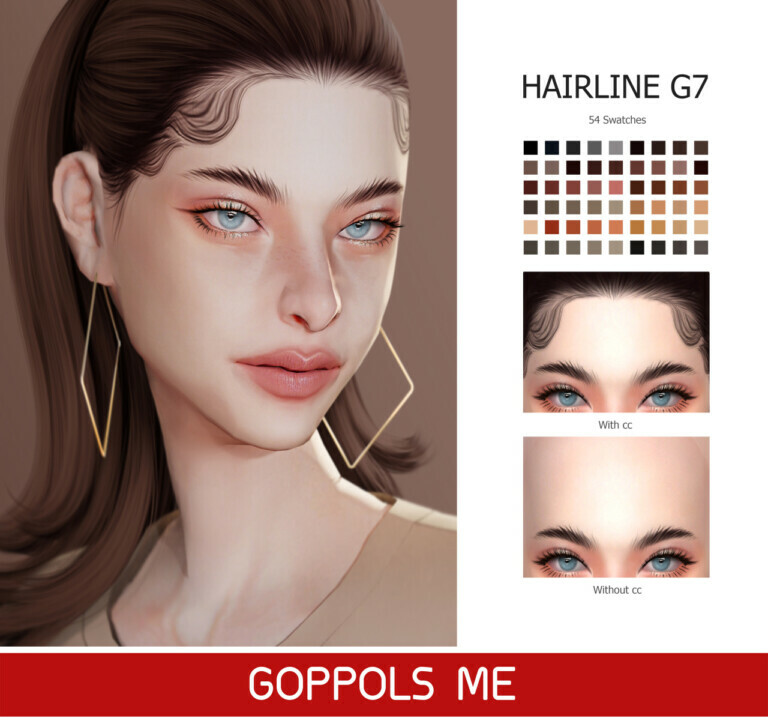 The hairline is commonly filled with tiny hairs that often fly away when styling hair. But when styled, these baby hairs can make for a very interesting and eye-catching hairline!

The GPME Gold Hairline G7 hairline mod offers delicate hair lining along the top of the forehead that cascades down into wavy baby hair formations.

This hairline mod is the perfect one to download for styling a classic y2k style Sim. The hair looks like they have been styled using hair gel in waves.

This mod also comes in 54 color swatches, including both light and dark natural hair shades. 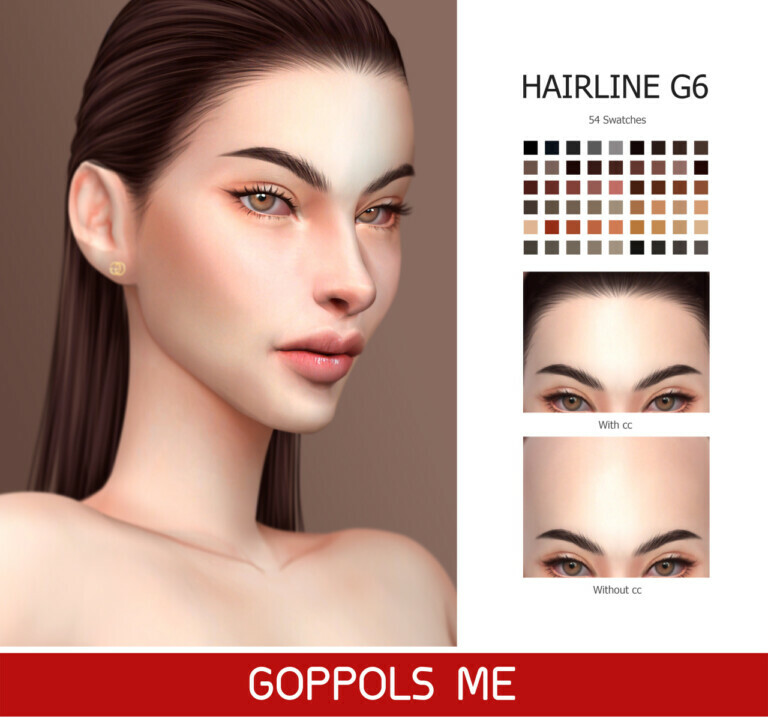 Creating the perfect updo requires time spent on fixing and adjusting the hairline, too. So, the GPME Gold Hairline G6 hairline mod makes this process simple.

This hairline mod creates a simple hairline that has been slicked back to transform any chic hairstyle into a more realistic one in The Sims 4.

Each strand of hair looks as if it were carefully pulled back and creates a more realistic sense of dimension in your Sims hair. 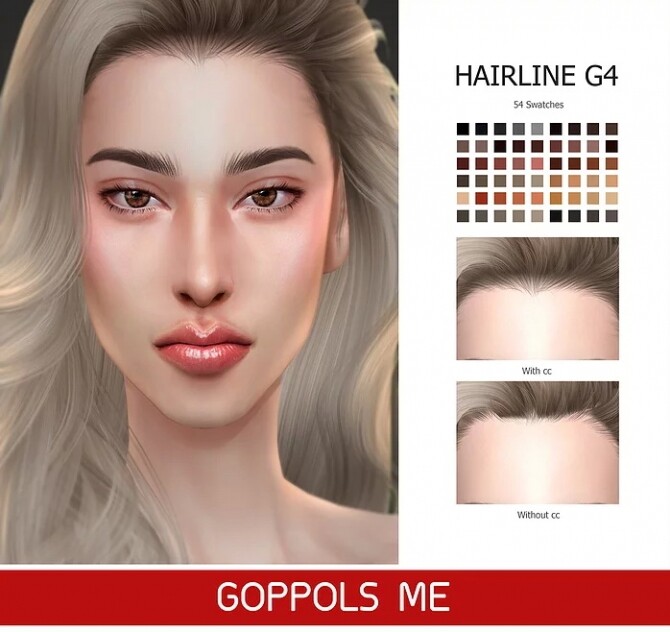 If you’re looking for a good combination between a widow’s peak hairline and an organic hairline, then the GPME Gold Hairline G4 mod is for you!

This hairline mod offers a subtle change to your Sims hairline, as it creates a small triangular peak in the center of the forehead.

This is a great hairline for styles that partially or fully expose the hairline.

Though small, this hairline makes a great difference in the appearance of your Sims hairstyle.

This hairline also comes in 54 color swatches, including shades of blonde, brown, black, red, and grey. 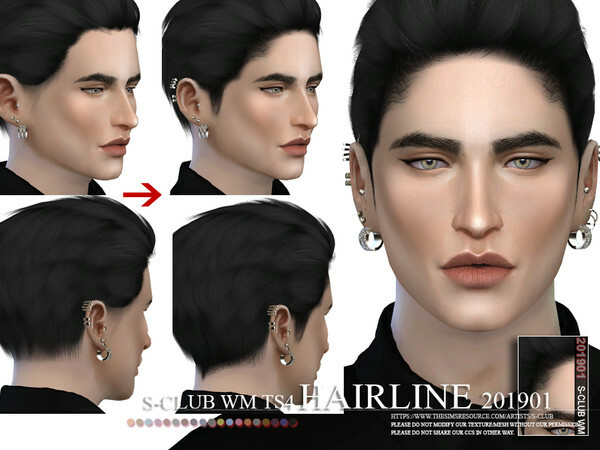 Don’t think we would leave specifically the men out of this! This hairline mod is the perfect choice for any short hairstyle that needs a bump in definition and shape.

The S-Club WM TS4 Hairline 201901 includes 19 colors, including both natural hair shades and a select number of colored hair shades.

This hairline mod doesn’t only fill in the empty parts of the hairline along the forehead, but it also fills in the spaces in front of the ears.

So, this hairline CC can also double as a type of sideburn CC. 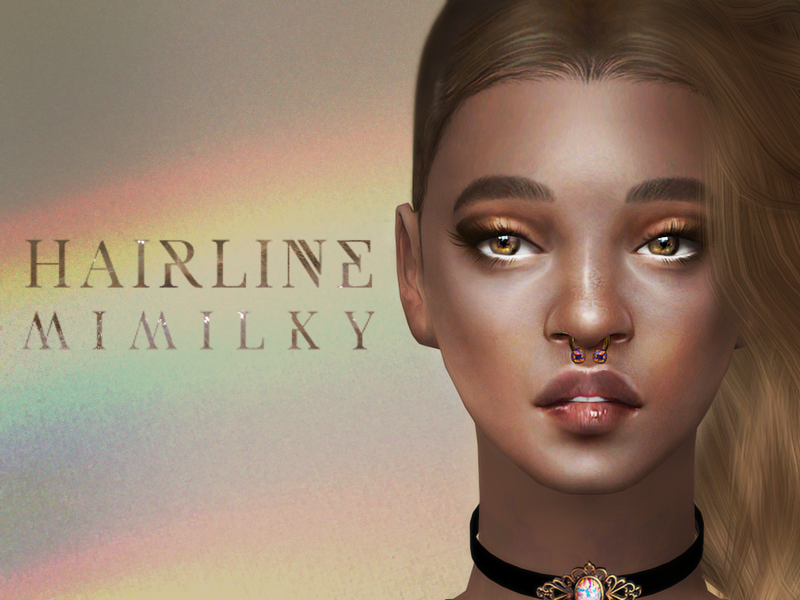 This is the perfect hairline for creating an even circle shape! The Mimilky Hairline is a simple hairline that offers a simple complimentary extension of almost any hairstyle you give your Sim.

The hairline starts centered and gently wavers out, parting down both sides.

This hairline also comes in 26 colors, including a rich brown and a deep, true black, as featured in the promo photos.

You can equip this hairline mod for Sims of all genders and from the ages of Teen and up. This is the perfect hairline if you have a Sim that almost exclusively wears their hair up. 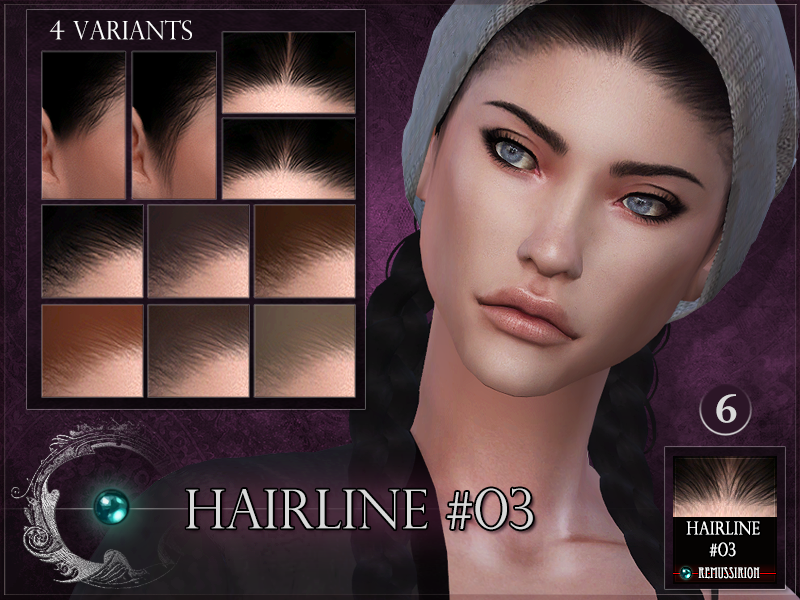 Another great option for those looking for a more realistic and natural hairline is the Hairline #03, created by RemusSirion.

The Hairline #03 CC includes four variations, including two center forehead headlines and two for the side of the head. Both offer very subtle differences.

You can choose to have the part exposed or not with this hairline CC set. The two side variations allow you to add more hair in front of the ear or leave it at a shorter length. 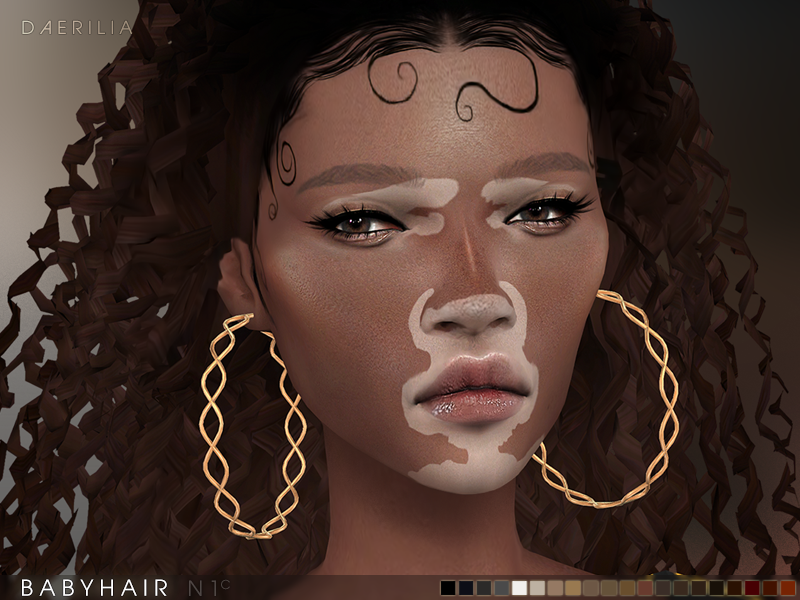 If you are looking for a hairline that includes actual styled baby hairs, look no further with the Babyhair N1c hairline CC!

This hairline mod gives your Sim the cutest stylized baby hairs on their forehead and temples.

Two long hairs have been styled in a spiral pattern across the forehead.

Two additional, shorter hairs have been styled the same way but placed on the sides of the head and face. All pieces in this set come in 20 colors and can be used by all Sims.

This CC is also part of a larger set that provides more options for various styles of baby hairs, including hairlines for babies!