No living room is complete with a TV set today! They’re great for easy entertainment and fast skill learning for Sims, but the base game offers very few TV options.

Custom content creators always see voids like this and are at the ready to provide. So, we’ve compiled a list of the best TV CC available!

Here, you’ll find TVs of all sizes and interesting designs, so there is bound to be one fit for every Sim home. 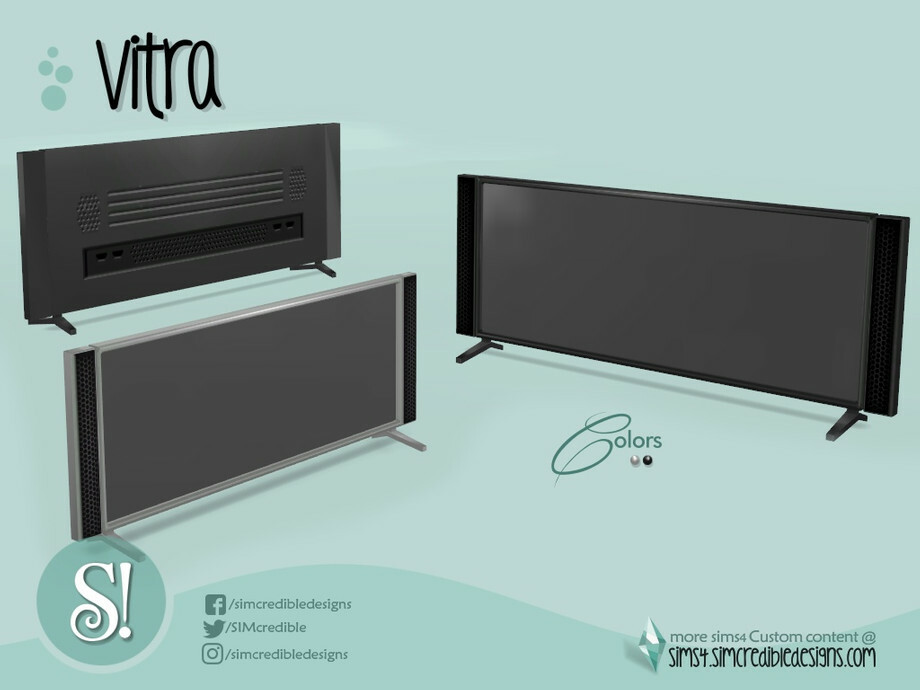 Most of the televisions in TS4 are square or smaller rectangular sizes. But what if you’re looking for a much wider TV?

Then, the Vitra TV is the perfect fit for you because it is far longer than most flat-screen TVs! The Vitra TV comes in black and white color options and is meant to sit on your Sims TV stand.

While this is a bit dated, since most flatscreens go on the wall, this is still a nice widescreen to have!

It’s based on a 16 by 9 ratio, which is perfect for the nights that your Sim wants to curl up on the couch for a movie night! 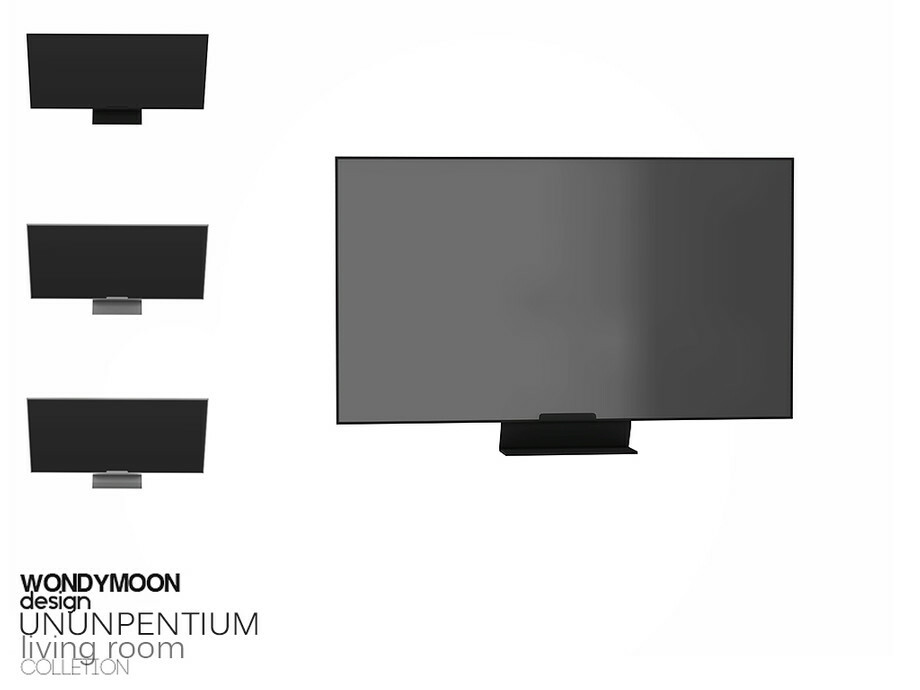 The Ununpentium TV is one CC TV that sits on a stand and features a seamless flat screen.

This custom TV is also a part of a larger set called the Ununpentium Living Room, which includes this chic and sleek TV set, but also includes shelving units, décor items, and more.

This is one of the best TV options on this list for players who want to make their Sims living rooms look as modern or futuristic as possible! 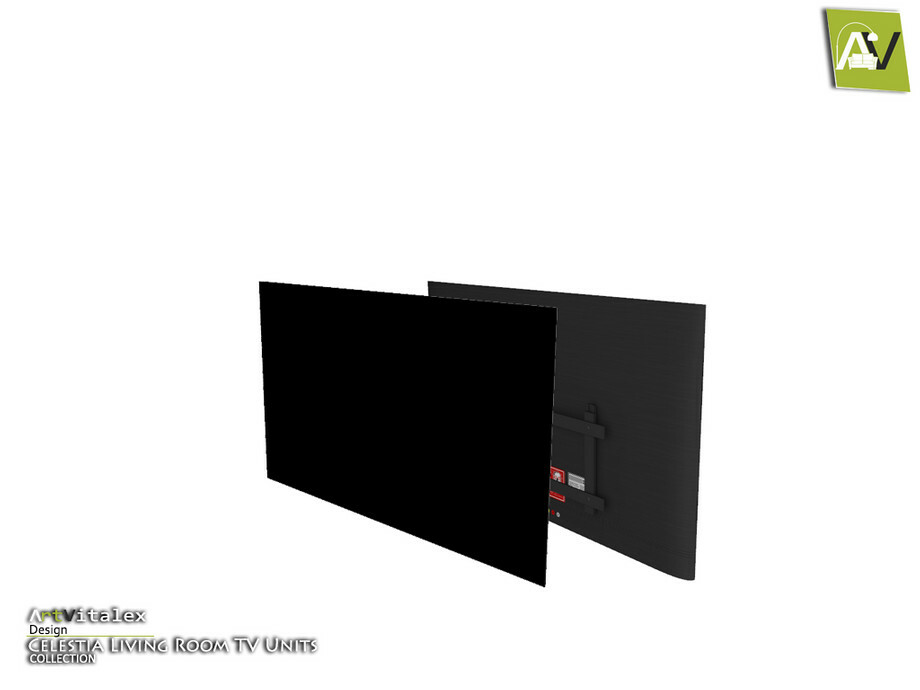 This is another CC TV that comes as a part of a complete living room set.

The Celestia TV is a part of the Celestia Living Room TV Sets, which includes the TV as well as the décor and shelving units that are meant to surround the TV.

The Celestia TV comes in three colors, black, grey, and white. Only the back of the TV changes color, however, so you won’t see the difference really while playing.

However, this TV is meant to be hung on the wall and is a decent size for almost any modern Sim home!

There also isn’t a large border surrounding the screen of the TV, which is perfect for seamless watching! 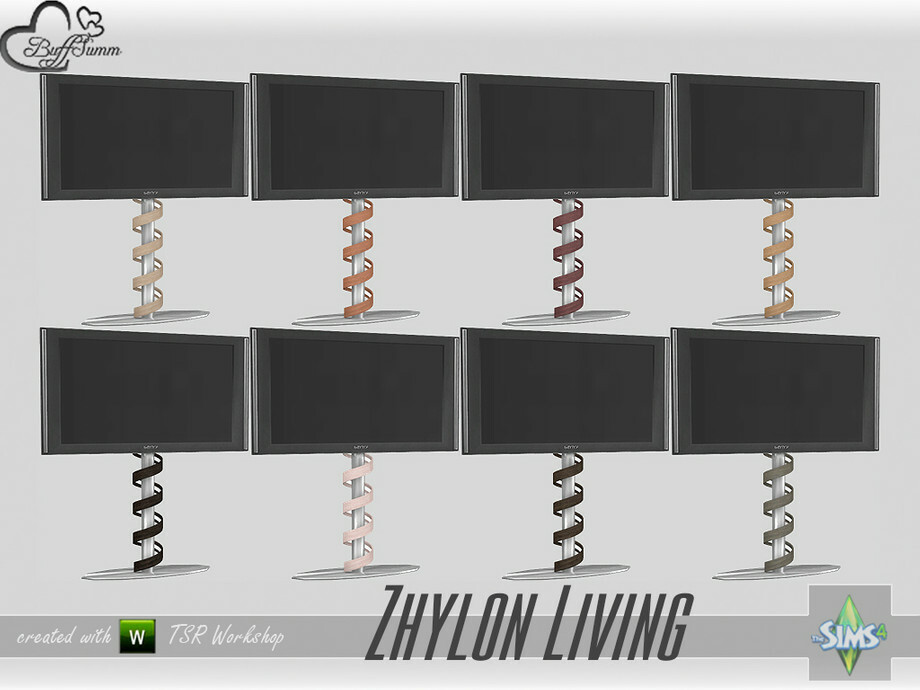 Not everyone wants a TV that needs to be attached to the wall or sits in a TV stand, so this standing CC TV is for you!

The Living Zhylon Standing TV stands on its own with a metal detail piece that spirals around the stand.

In the set, the TV also have matching speakers with the same spiral detailing around the stand posts, and the TV fits well among other eccentric décor and items. 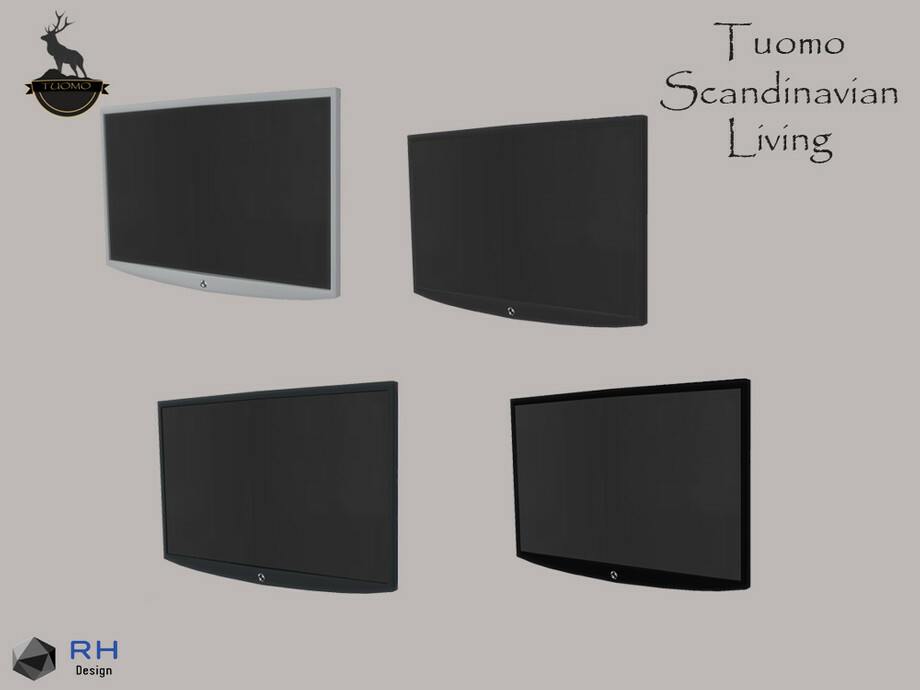 If you’re looking for a flat screen that doesn’t eat up all of the wall space around it, then the Tuomo NAX Flatscreen TV is a perfect option for you!

The Tuomo NAX Flatscreen TV is a part of the Tuomo Scandinavian Living CC set, and the set focuses on a simplistic modern appearance.

The TV has a slim frame surrounding the screen and is slightly curved at the bottom for an interesting design appeal. Because of its simple design, this TV fits in any living room! 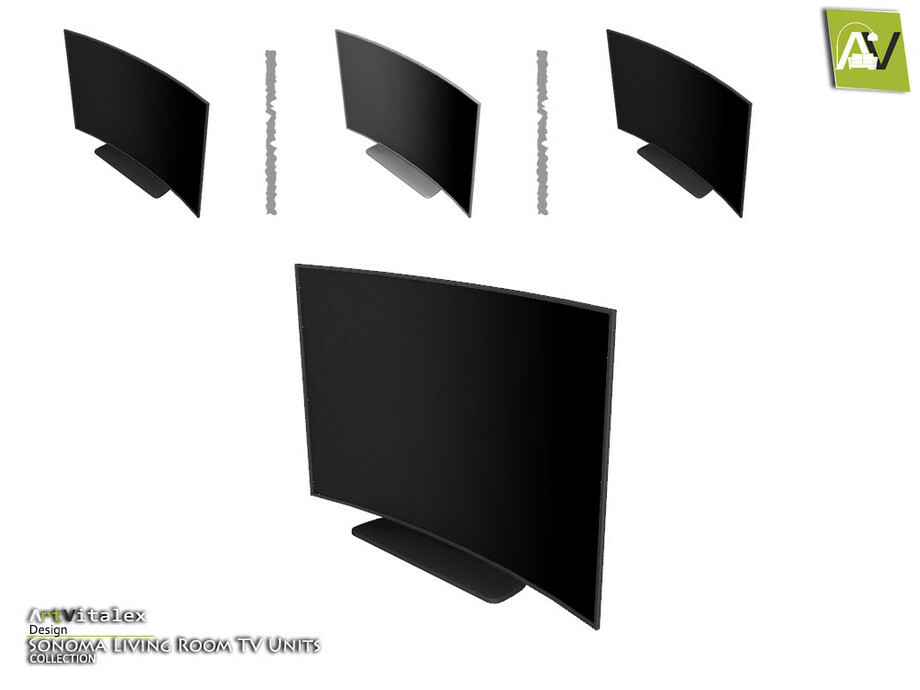 A standard straight television is great, and all, but the surrounding viewing pleasure of a curved screen enhances the overall experience!

The Sonoma TV is the perfect TV for any tech-savvy Sim. This TV comes in four colors, including black, dark grey, light grey, and silver.

The overall appearance of the TV is modern and would fit well in any living room that is just as sleek.

The Sonoma TV is also a part of a larger CC set called the Sonoma Living Room TV Units set, which contains a TV stand, shelving, bookshelves, and more to create a modern living room with wooden details. 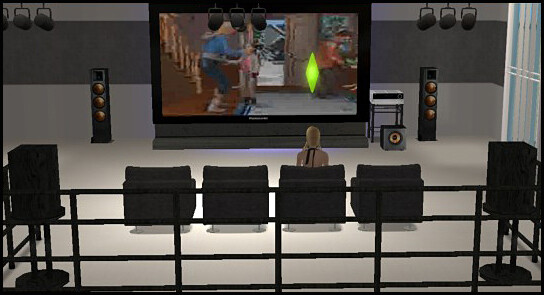 Need that one gigantic TV set to achieve your Sims dream of a true at-home theater? Look no further!

The Home Cinema Deluxe Edition offers a massive television screen that is closer in size to a movie theater screen than a TV!

This TV set also comes with speakers of varying sizes, including a tower speaker, a surround sound speaker on a post, and a small subwoofer speaker box.

The screen is double the height of a Sim, too, for maximum up close and personal viewing!

The TV by itself costs 20,000 Simoleons, while the speakers cost 400 Simoleons per unit. 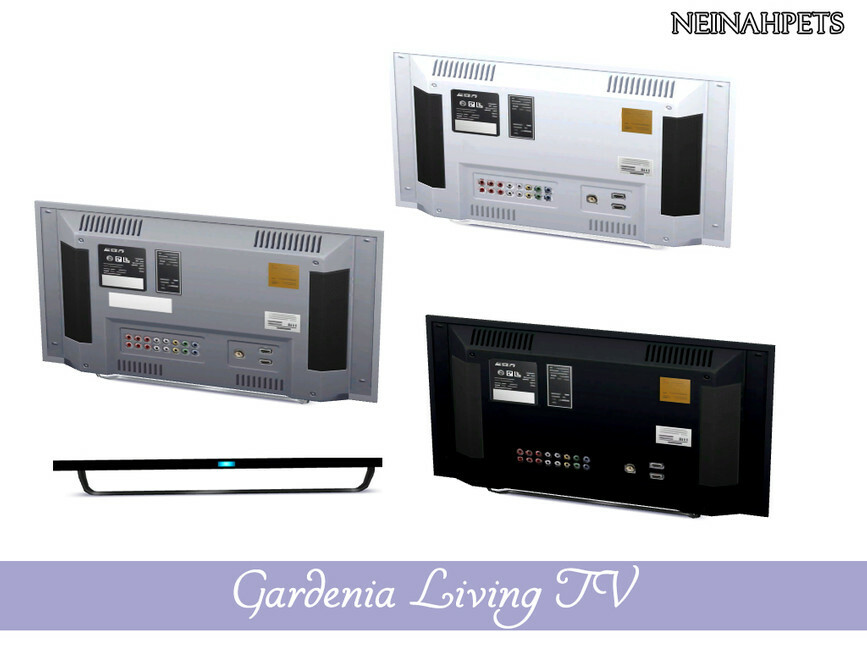 There are few CC TVs that truly capture the realistic image of a TV, but the Gardenia Living TV is one of them.

This TV has realistic imaging of the cable ports and information stickers on the back to mimic the look of a real-life TV.

The Gardenia Living TV comes in three colors, including black, silver, and white, and even has a bright teal light at the bottom to signal that the TV has power.

This TV is a part of the larger Gardenia Living Collection, which includes many floral-patterned items, but the TV is the perfect addition to make the room feel modern.

Another great TV with a curved screen, but with a wider ratio! The Soho TV is a simple flat screen with a short silver stand at the bottom.

The edge around the TV is also quite slim so as not to get in the way of your Sims view.

Your Sim can purchase this TV for only 3,400 Simoleons, too! This TV can also be downloaded with the rest of its set, the Soho Living Set.

The Soho Living Set comes with sleek furniture, pillows, tables, a rug, wall décor, and plants. The main color schemes of this set include rich purple or bright green with black accents. 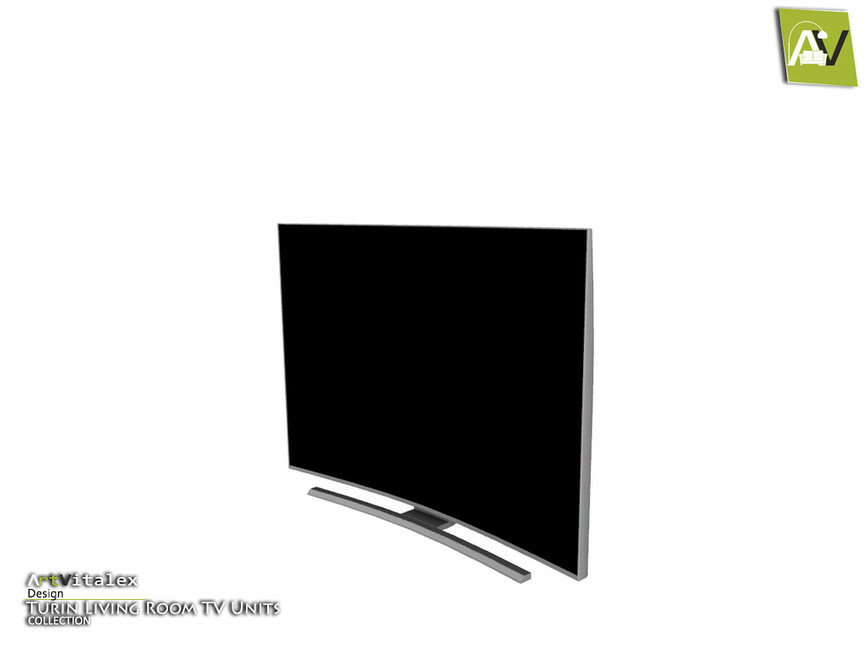 If you want a fair middle ground between a curved monitor and a straight one, then the Turin TV can offer that fine medium.

The Turin Television is another flat screen that is ever so slightly curved with a long but slim stand to support it. This TV comes in three colors, black, white, and dark grey.

The Turin Television also can be downloaded with the rest of its set, the Turin Living set!

The Turin Living set includes the TV, lighting, a wooden TV stand, wooden shelving, and other décor elements that you can choose from three colors as well.