Life is a beautiful and mysterious thing in The Sims 4, but sometimes it needs more spice and intrigue. So, that’s why we have the Supernatural to make things more interesting in your Sim’s neighborhood!

We’ve compiled a list of the best supernatural CC, including some incredible mods, to really make your Sim’s town truly supernatural.

Most forget that superheroes and super villains can also count as supernatural entities! Get to live your dreams of becoming a hero or villain with Sacrificial’s Armageddon Superhero Mod.

This mod will put a bit more plot and intrigue into your Sim’s world as it adds more animations and special effects, along with more gameplay!

As a villain, you can kill other Sims, explore the Dark Power skill, and cause mass destruction. AS a hero, you can put a stop to villains you create, embrace the Superhero skill, and become an icon to other Sims. Among the supernatural creature options to choose from and play as Ghosts aren’t on the top of the list in most cases. That is until you download the Better Ghosts! Mod!

The Better Ghosts! Mod makes ghosts more fun to play as. Since they don’t require physical needs to be met, instead, they have an energy bar. Different types of ghosts will have different decay rates for their energy bars.

Witch and Vampire ghosts have nighttime bonuses, where no energy will be spent to use their powers at night.

You can drain Sims for energy or return to their urn to sleep. You can also scare, haunt and possess other Sims! 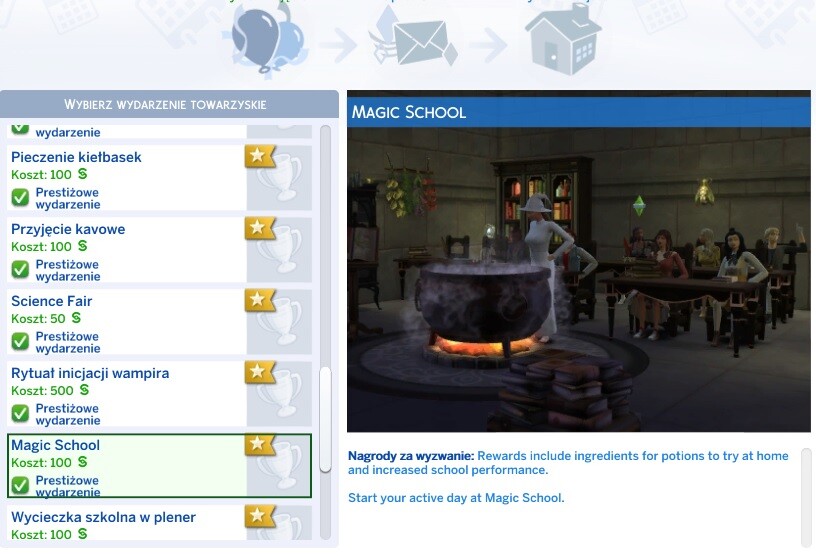 Sim children of witches and wizards should have the chance to learn magic in an established environment, like other students. So, CC creator iklavelle created the Magic School mod!

The Magic School mod is for Sims who are children and teens, where they can be enrolled to attend Bonehilda’s Magic School.

This school can be selected as a career, where kids will be sent to attend from 8 am to 1 pm, Monday through Friday.

You can also participate in the magical education if you have the “Kids can perform magic” mod, found here. Almost every magical fantasy TV show and book series has at least one character that uses magic for evil, so Sim players should be able to have that choice, too!

With the Black Magic Mod, your Sim has the ability to gain powers through selling another Sim’s soul. Afterward, they will have access to three new spells.

However, before you can do any of that, you need to buy and read the new book that appears when you download this mod.

After that, you can purchase a Weird Tome, which will unlock the new option to Offer Soul to the Old Gods. 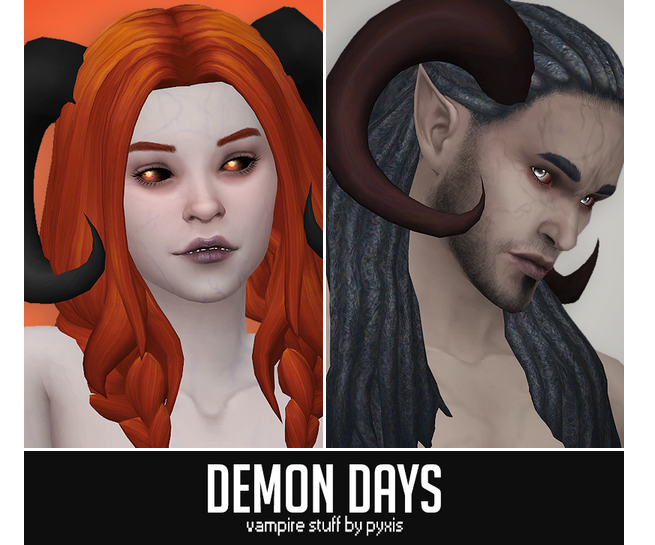 Vampires and demons don’t always have to look like a human Sim, and they traditionally didn’t!

So, the Demon Days Vampire Stuff CC set includes many bits and pieces that can be the cheery on top for a Sim’s appearance.

If you have vampire Sims in your game, then these items will appear in the vampire section. If not, then they will appear under tattoos and hats.

The horns frame the face as they are curled down and toward the face. The veins are also subtle but are a great up-close texture to have.

Lovers of traditional fantasy and magic systems will love the Magic Sigils set by Natalia-Auditore!

The Magic Sigils set includes one sigil that is actually a rug and comes in 12 colors and textures.

Each color features a different sigil pattern with varying symbols and shapes.

This CC item is a great addition to any supernatural household, but it especially completes a witch or wizard’s lair, where they would be summoning other creatures! 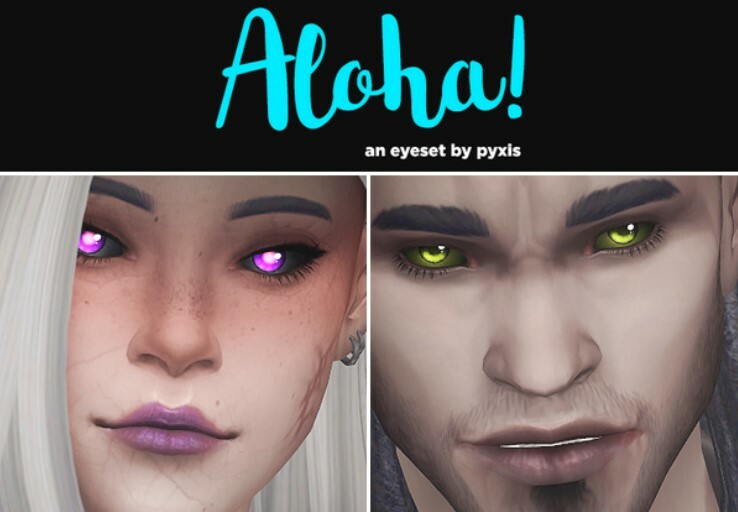 When we think of supernatural creatures, many of us think they will or should have extraordinary physical features. Like vampires having hypnotizing eyes!

With the Aloha! Eyeset, you can equip detailed eyes in fascinating colors to any Sim, supernatural or not. This eye CC set includes both a day and night time version of the eyes, which was designed for vampire Sims.

You can also create a heterochromia effect in your Sims’ eyes! There are also sclera effects that change the overlay and replaces it with a whiter version, or you can choose from two bloodshot versions. 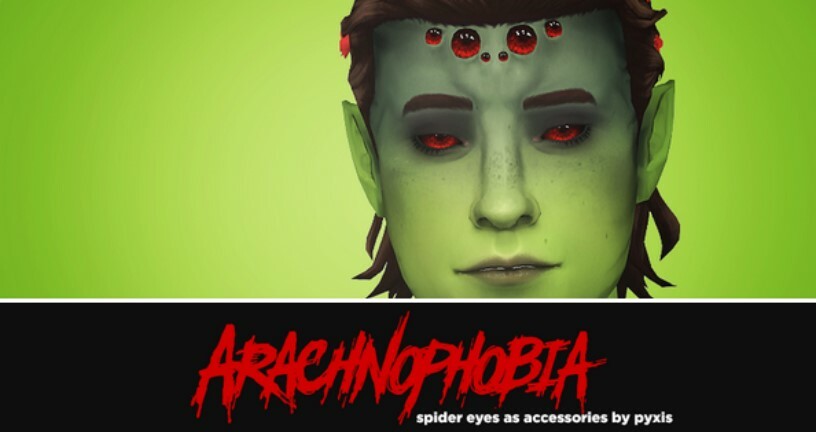 If you’re interested in looking a bit more terrifying or want your Sim to look like they have some spider genetics, then the Arachnophobia Accessory Spider Eyes set is a necessity.

With everything equipped, your Sim’s face will feature a bulky forehead with vein lines tracing the cheekbones and nose.

Their normal eyes will also be affected. This CC set works for Sims from teen to elder and for all genders as well.

The face details can be found in every tattoo category and in the face paint section.

Being a witch or vampire is cool and all, but there are so many more supernatural creatures in folklore and, supposedly, in the world.

The Arachne Set converts your Sim’s legs into a terrifyingly cool set of spider legs. The entire lower half of your Sim’s torso will transform into that of a gigantic spider.

The Arachne Set comes in 11 colors, including a deep black and purple combination featured in the promo photos.

You will also receive 13 poses, and the entire set is equipped for male and female Sims to use. 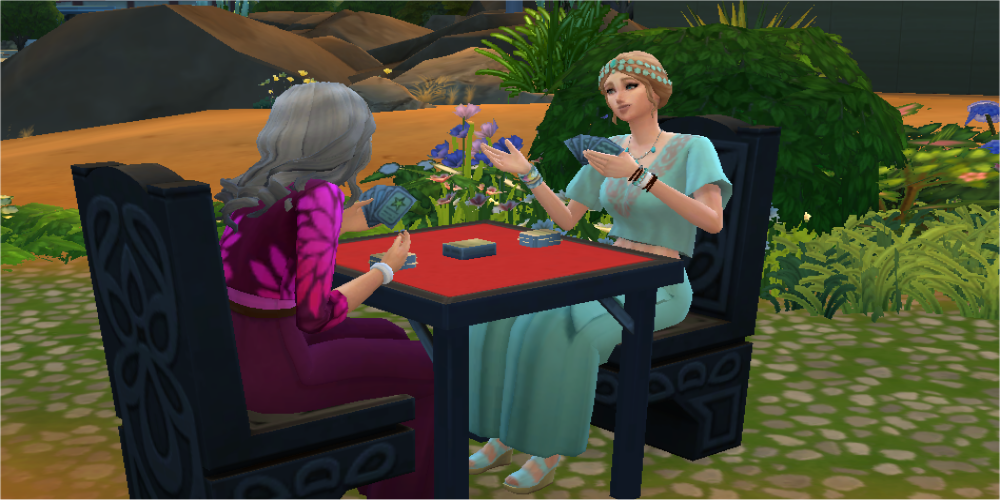 Even supernatural creatures and magical people need to make a living. You can do so by becoming a divination master with the Tarot Card Reader Career!

The Tarot Card Reader Career created by PurpleThistle is a one-track career with ten levels. It is also base game compatible, so you don’t need the Supernatural DLC pack to use this career.

The first level starts you at Major Arcana Training, working Monday through Friday and earning 23 Simoleons per hour. The ideal mood to be in when you go to work is Inspired, so be sure to keep your Sim creatively engaged!