Our flapping friends make great Pokémon companions and here are 20 of the very best Bird Pokémon ranked. Let us know which one is your favorite!

Spearow is one of the original bird Pokémon from Generation I.

In the anime, one of our first introductions to Spearow is when Ash and Pikachu get attacked by a flock of them after Ash tries to catch one without his partner’s help.

Life lesson: Don’t throw a rock at a bird.

Spearow is a dual-type Pokémon of Normal and Flying attributes. They evolve into Fearow at level 20 and are known as the “Tiny Bird” Pokémon.

You won’t find Spearow in any Generation VIII games, but they do exist in Pokémon Sun/Moon and Ultra Sun/Moon. 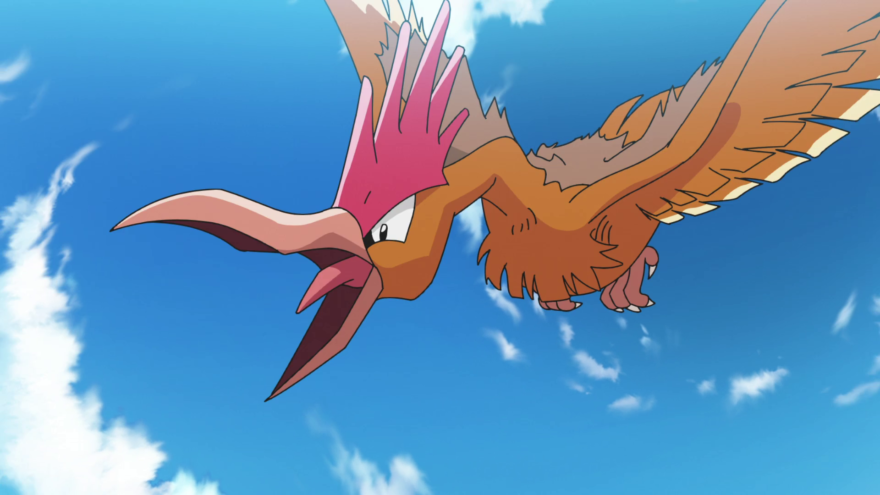 The much larger evolved form of Spearow, Fearow, is mostly brown in color and has a long beak. They’re an angry-looking Pokémon. Like Spearow, Fearow is not available in Generation VIII games.

After evolving at level 20 in later games, you’ll find that your Fearow can learn several more moves. These include Flying-type moves, as well as one each of Psychic, Dark, and Ground.

The last skill they’ll pick up is Drill Run, a Ground-type move at level 53. 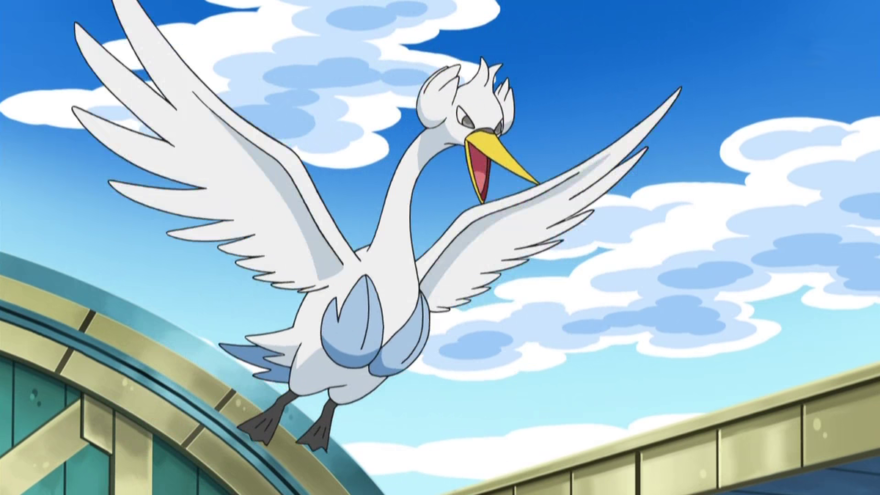 An extremely graceful design, obviously based off of a white swan. Swanna evolves from Ducklett at level 35 and is available in any Pokémon game from Generation V to Generation VII.

Swanna has white plumage, with a long beak, and a few white feature-like pieces on their head.

There are three more skills that Swanna can learn after evolving. The strongest of these is Brave Bird at level 47.

Brave Bird is a physical attack with 100% accuracy that allows Swanna to tuck in their wings and charge at their target. There is recoil damage, but sometimes it’s worth it. 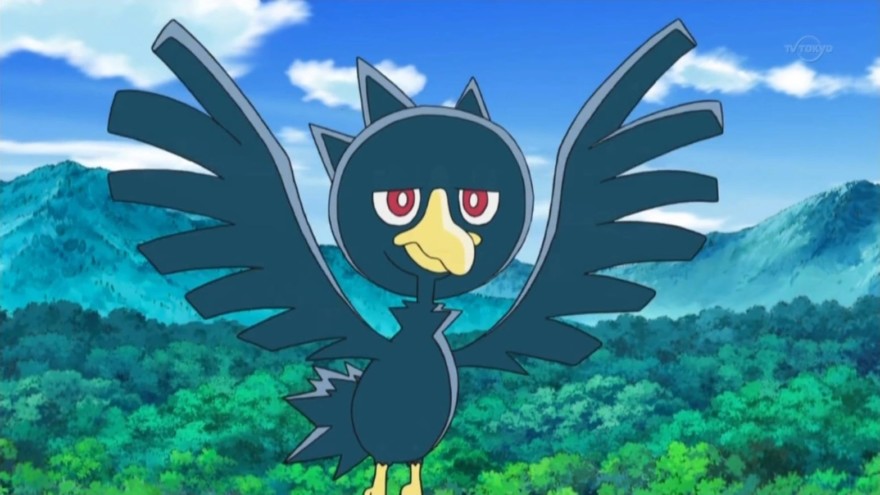 The kind of Pokémon you expect to see around All Hallows’ Eve or hanging around a farm at night.

Murkrow is a Dark/Flying Pokémon, with a tail like a witch’s broom, and a head design that makes them look like they’re wearing a hat. Red eyes complete their design, making for a great Dark-type bird Pokémon.

Murkrow can be evolved at any time when exposed to a Dusk Stone. It’s completely up to you to decide when to evolve your Pokémon.

The last move that Murkrow can learn by itself comes at level 65 – the Dark-type move Quash. 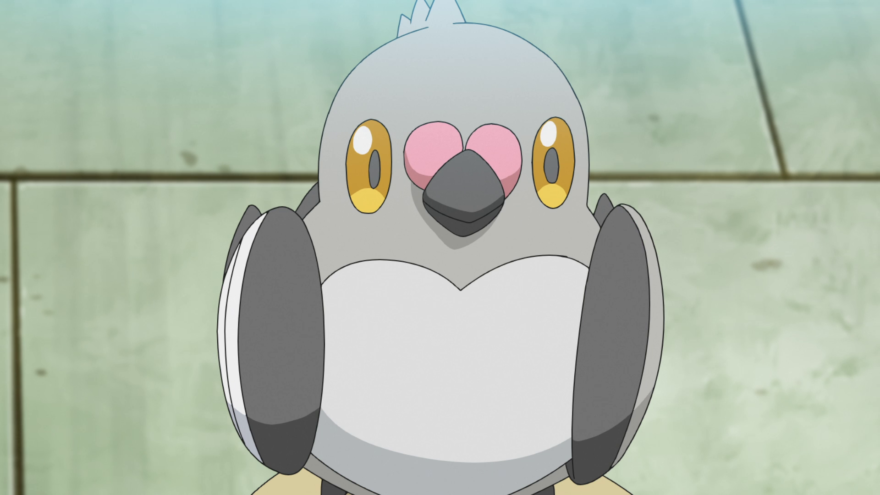 Is it a pigeon? Is it a dove? Technically, this Pokémon is both. Pidove is a black and gray Pokémon with yellow eyes. They evolve into Tranquill at level 21 and then evolve again at level 32.

They’re a Normal/Flying Pokémon from Generation V. Pidoves are not known for their intelligence.

Before evolving, there are several moves that your Pidove can naturally learn. These are mostly Normal-type moves, though they will learn several Flying-type moves later on in their learnset.

The last move they learn before their first evolution is the move Swagger (which, let’s face it, you’ll make them forget pretty quickly). 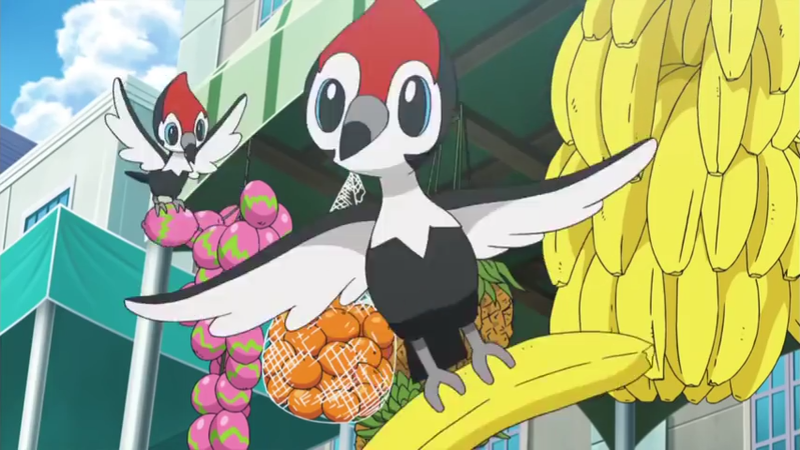 Pikipek has a similar appearance to a woodpecker. This Pokémon has strong neck muscles and is able to strike a target with its beak around 16 times per second.

This is not a skill that they bring into battle, but one they have been seen doing in the wild.

Pikipek is not available in Generation VIII games. However, their learnset for Generation VII is varied. This Pokémon first evolves at level 14, and then again at level 28.

Before evolving for the first time, your Pikipek will be able to learn the Fighting-type move Rock Smash, as well as the Normal-type move Supersonic. 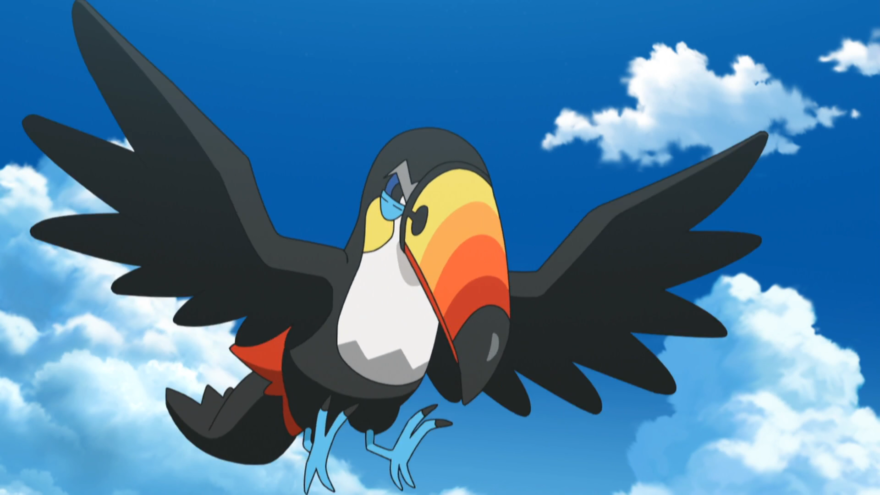 This Pokémon’s design is based on a Toucan and has an extremely similar design to the Bird. Toucannon has gases inside of their beak, which can catch fire and help them shoot seeds with enough force to break stone.

This Pokémon is only available in Generation VII. Upon evolving at level 28, your Toucannon will immediately want to learn Beak Blast. Beak Blast is a Flying-type move and is Toucannon’s most powerful move. 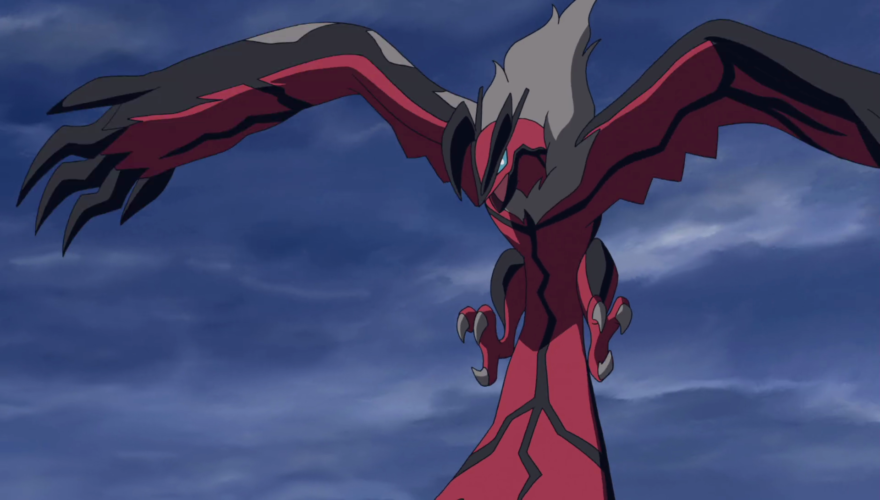 Yveltal is a Dark/Flying Pokémon that is not known to evolve in any way.

This large, winged Pokémon has huge talon-like claws and a long tail that looks like a third wing.

The two most powerful moves in Yveltal’s arsenal are Hyper Beam and Sky Attack. Both have a 90% accuracy rating and can be used five times.

Hyper Beam is a move than any Pokémon fan will be familiar with and is a strong competitor if you’re looking for a move to quickly take out your opponent. 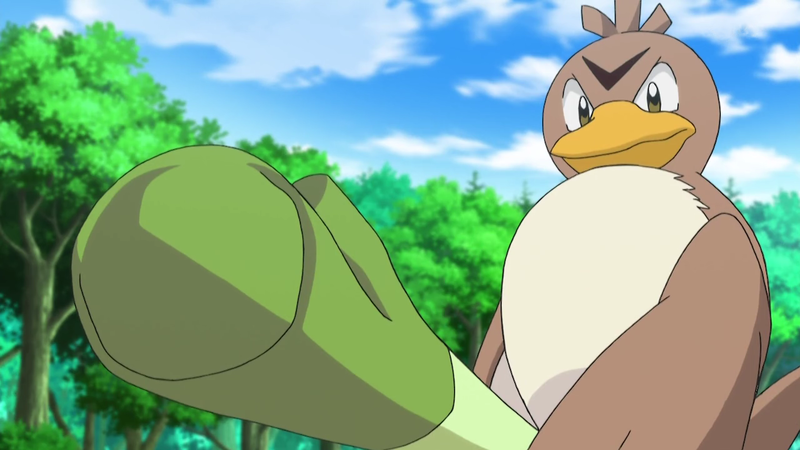 Farfetch’d was one of the many bird Pokémon that came from Generation I. They aren’t known to evolve, but they do have a secondary form.

Farfetch’d secondary form is purely a Fighting-type and appears in the Galarian region. This version of Farfetch’d evolves into Sirfetch’d during battle, provided that they land three critical hits on their opponent.

The last move a Farfetch’d can learn is Brave Bird at level 65.

GalarianFarfetch’d has a slightly different learnset, which includes several Fighting-type moves – such as Final Gambit, Brick Break, and Rock Smash. 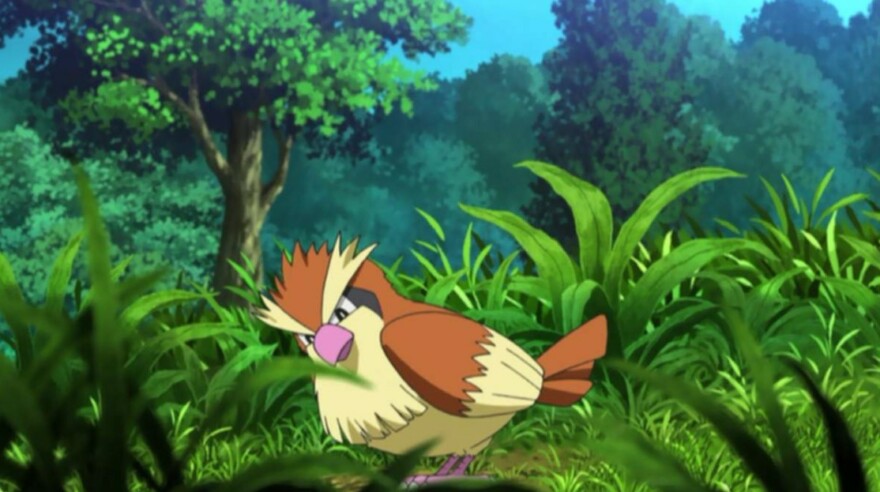 The “Tiny Bird” Pokémon, Pidgey is another of the original bird Pokémon from Generation I. This small Pokémon is brown and cream in color, with three tufts on the top of its head.

Pidgey is known for having an amazing sense of direction, and they are fairly commonPokémon to find in the wild.

Pidgey’s strongest move before evolution is Whirlwind, a status move that blows away your enemy and drags out a different Pokémon. 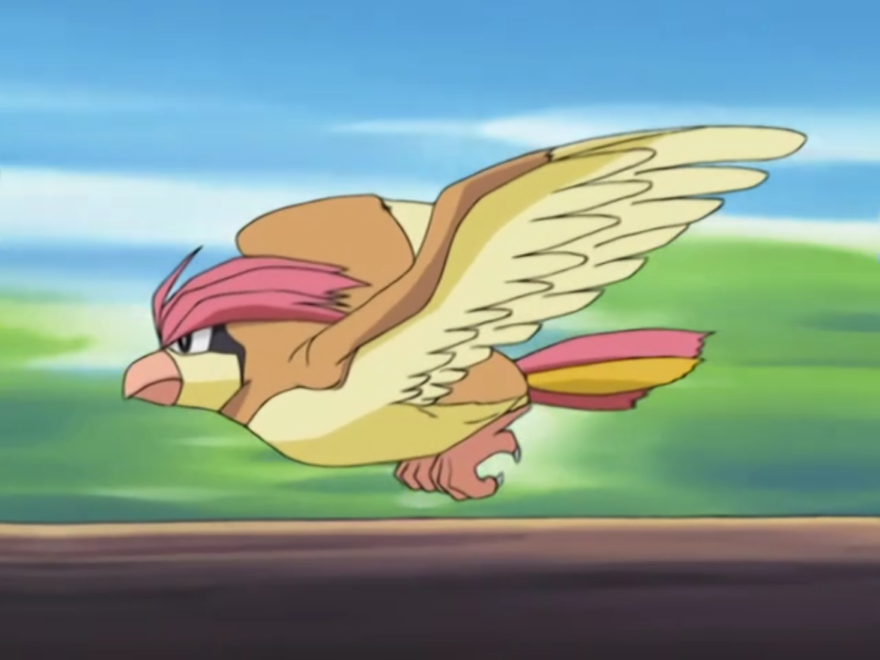 The first evolution of Pidgey, Pidgeotto will take to the stage once your Pidgey reaches level 18. Pidgeotto’s design seems to be a mixture of avian and raptor elements.

This Pokémon is able to carry its prey several miles and has outstanding vision. They prey on Exeggcute, Magikarp, and Caterpie.

Though Gust is one of this Pokémon’s signature moves in the series, Pidgeotto would have learned Gust as a Pidgey around level nine.

Upon evolving the first time, the next move that your Pidgeotto would learn is the Dragon-type move Twister. 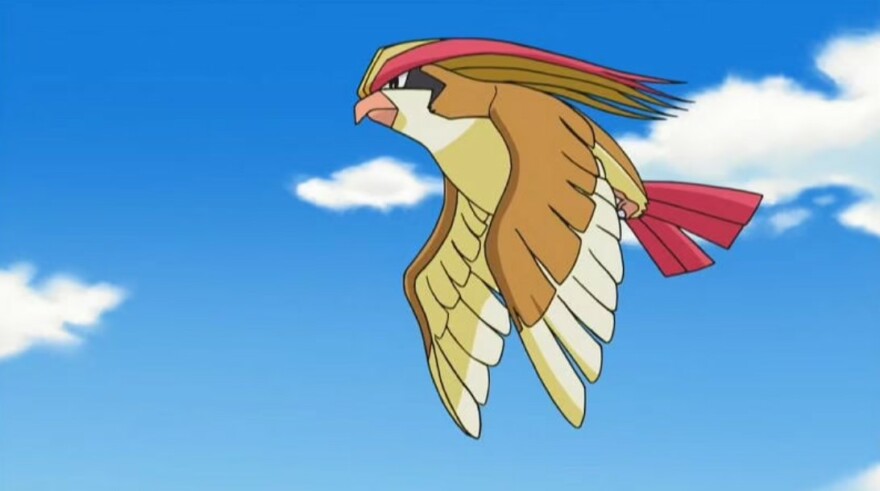 The final form in the evolutionary chain of Pidgey, Pidgeot is a large bird-like Pokémon that has a secondary form in more recent games.

If you give Pidgeot some Pidgeotite, they can transform into Mega Pidgeot for a time. Their stunning design in this second form includes blue wing tips and pink plumage.

The first new move your Pidgeot will learn is Wing Attack at level 38.

This Flying-type move is pretty powerful, and will likely be one of the four moves that you let your Pidgeot keep throughout their training.

After this, there are several status moves to learn – including Mirror Move. 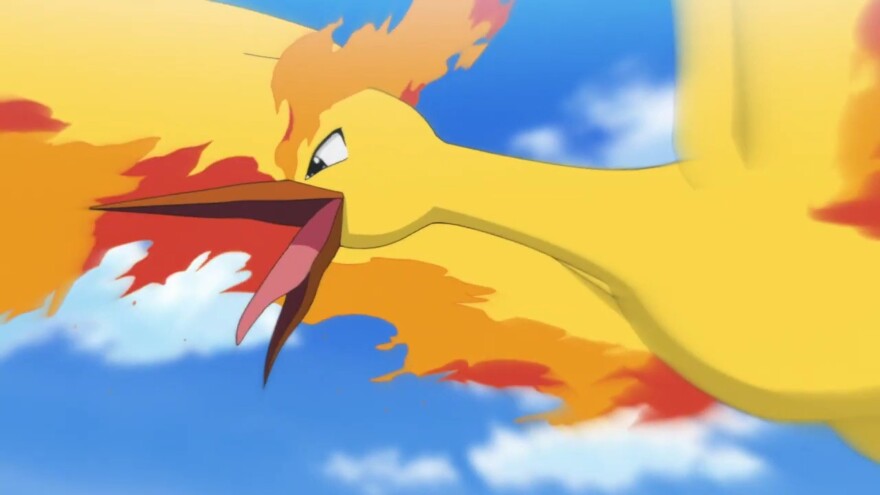 One of the three Legendary Pokémon from the First Generation, Moltres is a Fire/Flying bird from the Kanto region.

Until recently, Moltresdidn’t have any other forms, but with the introduction of Galar, our firebird has gained a second form to take.

This second form is the Galarian form; a regional form that Moltres can only have when you’re playing in Galar.

This version of Moltres is black and pink, rather than the traditional yellow and red/orange. Quite frankly, it’s a stunning change. 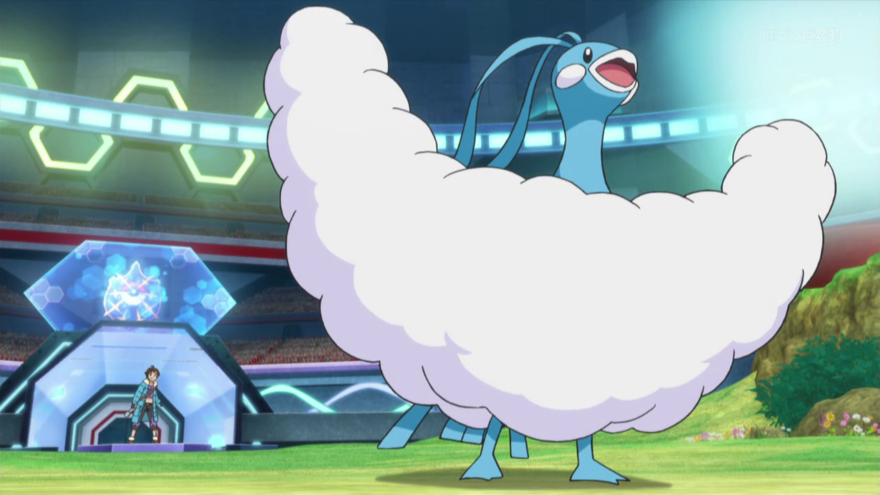 Altaria is so well-liked in the world of Pokémon because they basically look like little clouds. They’re a dual-type Pokémon, with both Flying and Dragon attributes.

The Mega Evolution version of Altaria is a gorgeous design that fluffs up this blue Bird even more when they’re given Altarianite.

Altaria evolves from Swablu at level 35 and comes from the Generation III Pokédex. Like many Flying-type bird Pokémon, Altaria also learns Sky Attack in its later levels.

Sky Attack is the strongest attack Altaria can learn, but there’s also Moonblast at level 52, which is a Fairy-type attack with the ability to lower your opponent’s Special Attack stat. 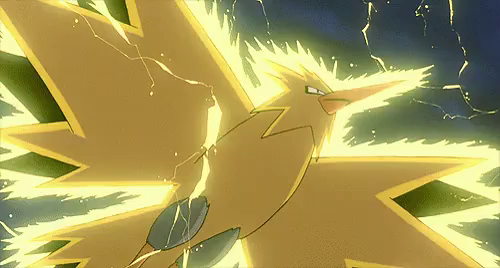 Our second of the three Legendary bird Pokémon from Generation I, Zapdos is an Electric/Flying Pokémon.

Unlike Moltres’ flowing fire design, Zapdos is full of spikey feathers and has an extra-long beak. Zapdos also has a Galarian form.

The Galarian form of Zapdos is orange and black. The usual two feet are transformed into largerfeet that have yellow claws. Both versions of Zapdos look unreasonably angry. They are the original angry Bird. 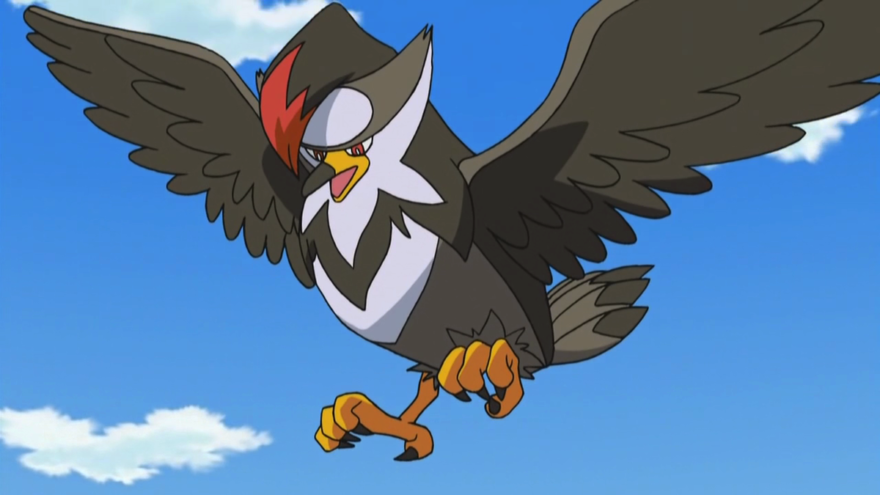 A Pokémon that looks like they belong in an anime gang, waiting to pounce on the protagonist or cause trouble.

Staraptor has a plume of feathers at the top of their head, which is black with red tips. They evolve from Staravia at level 34, who evolves from Starly at level 14.

As the final evolutionary form, Staraptordoesn’t have much left to learn from being leveled up by their trainer. In fact, there are just three move moves in their learnset.

These include Agility, Brave Bird, and Final Gambit. Final Gambit is a risky move, one that a trainer should only have their Staraptor complete if they’re certain they can take out their opponent with it. 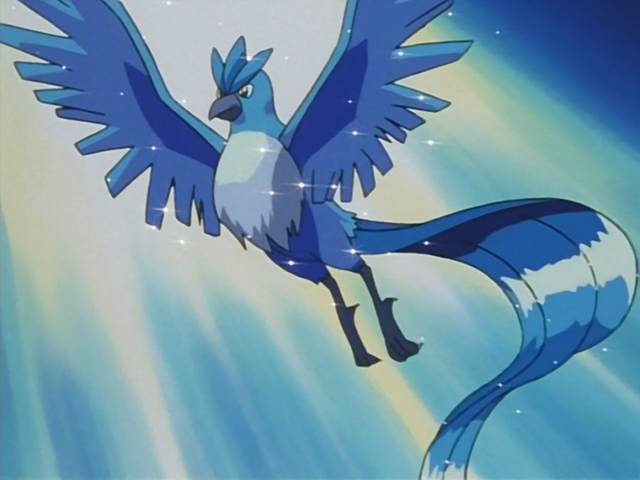 The third Legendary Bird Pokémon, Articuno is a Dual-type Pokémon of Ice and Flying attributes.

Of all the legendary birds of Kanto, Articuno is typically the fan-favorite. They’re the most bird-like of the trio and have an elegant design.

Like the others, Articuno also has a Galarian form. This form changes Articuno’s usual blue tone to purple, slightly elongates their wings and tail, and changes the shape of their head adornments.

All three Galarian forms are darker than their Kanto counterparts, that’s for sure. 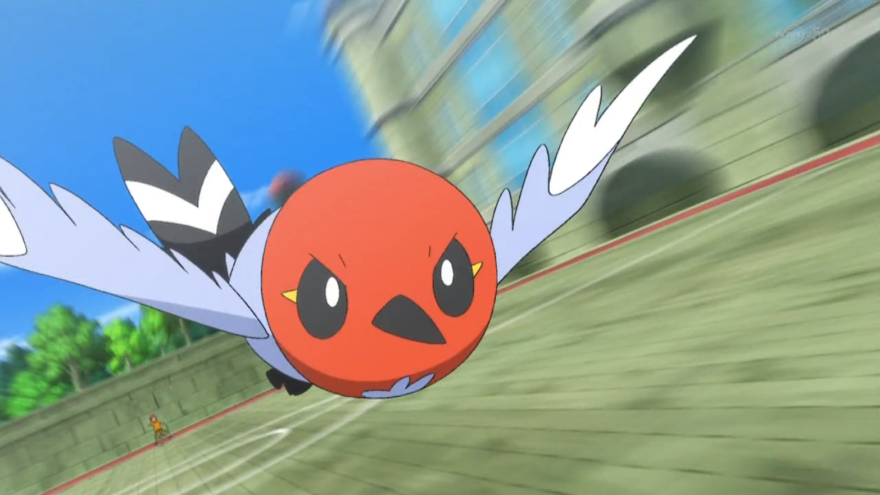 Another tiny bird Pokémon, we welcome Fletchling into the number three slot. Fletchling is based on a red-breasted robin and is mainly red and gray in color (with some black and white accents).

This little Bird may not look like much, but they’re the only Robin Pokémon around.

Fletchling evolves twice – once at level 17, and again at level 35. They may not have an extensive learnset, but there are plenty of strong moves available for your little robin to learn.

Before evolving, your Fletchling will learn Ember at level 10, which is pretty impressive for a tiny bird. 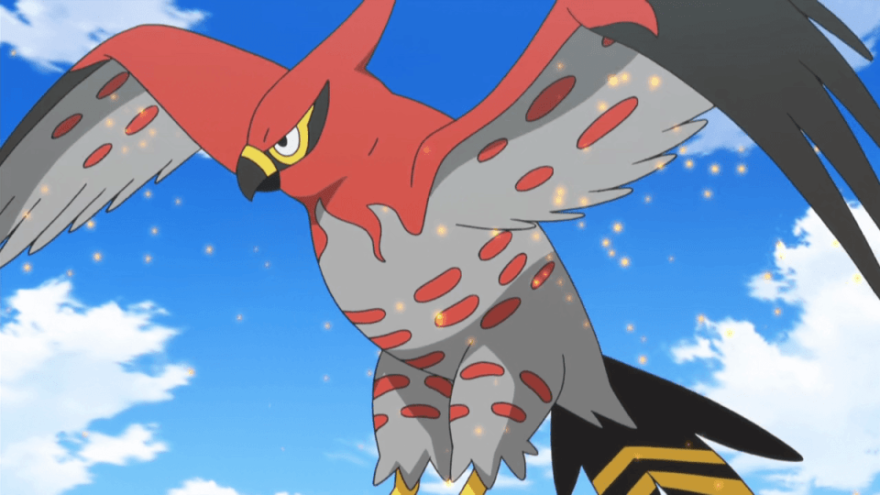 The final evolutionary form of Fletchling, Talonflame evolves from Fletchinder at level 35. Your Fletchling will have come a long way to get to this point.

Talonflame is known as the “Scorching” Pokémon and has a design similar to a hawk.

There are several Flying-type moves ready for your Talonflame to learn as they grow stronger, the most notable of which is Brave Bird at level 83.

Strangely enough, this Pokémon can also learn the Steel-type move Steel Wing, but that’s just another surprise to come from a Pokémon that started out so small. 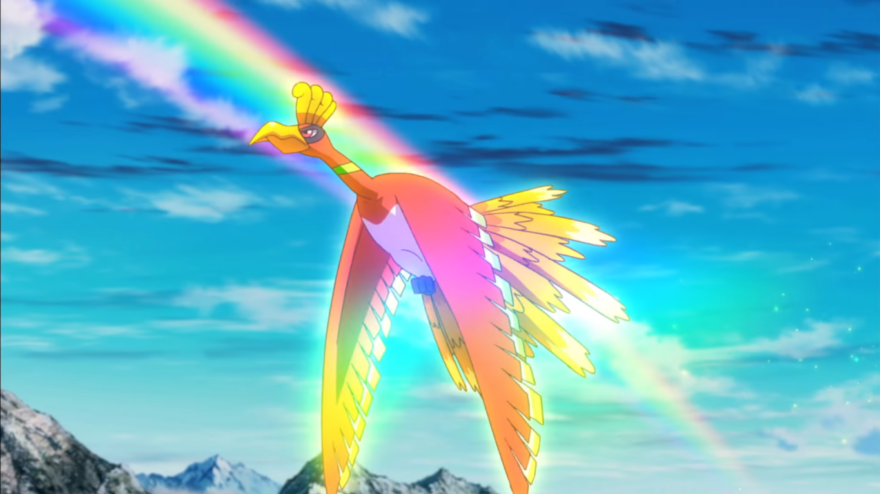 The final bird Pokémon on our list, Ho-Oh, comes in at number one. Ho-Oh has been around since the First Generation of Pokémon, though they did not appear in the Pokédex for the game at that time.

This was because Ho-Oh was considered to be a myth. In fact, when Ash saw Ho-Oh flying over a rainbow in the anime, Professor Oak told him that he couldn’t possibly have seen this particular Bird.

Ho-Oh is the trio master for Moltres, Zapdos, and Articuno, and appears in the anime, manga and movie adaptations several times.