These bear-type Pokémon make great companions and here are 15 of the very best of them Pokémon ranked. Which one is your favorite? 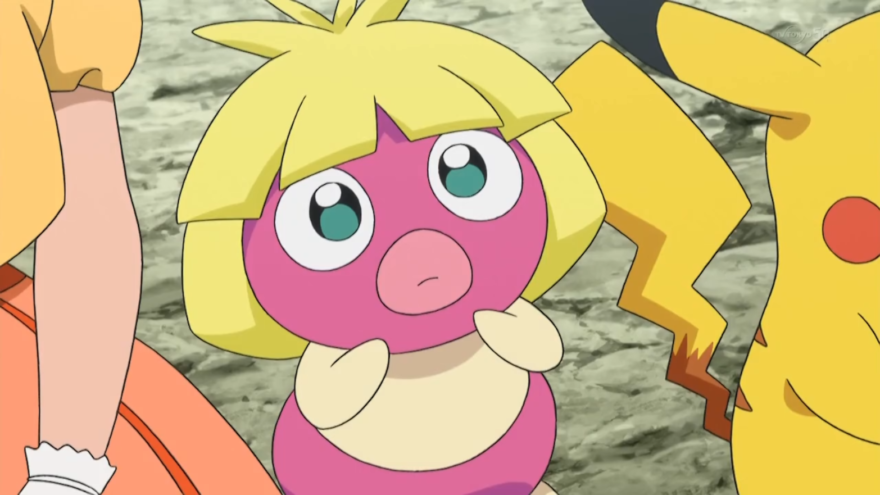 We’ve taken a few liberties with the first three Pokémon on this list because there aren’t quite 15 “bear” Pokémon to choose from.

But let us tell you why Smoochum appears on this list. Smoochum, the well-known kissing Pokémon may not look like a standard bear, but they do share a couple of characteristics.

Smoochum applies tree sap every day to keep their lips moist because they use their lips to help them examine objects.

Many bears will strip the bark from trees so that they can eat sapwood, and they also rub up against trees to use the sap as a kind of insect repellent.

Historically, there was once a species of bear that were mostly found in caves. Smoochum can be found in cities or caves, so there’s that, too. 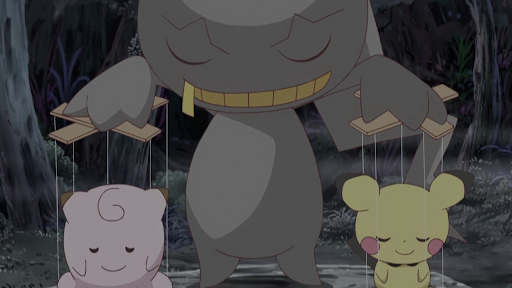 Banette is more of a scary, demented teddy bear Pokémon than anything else.

This Pokémon reminded us of the old Zippy plush from Rainbow – you know if Zippy was a dark Ghost-type. The idea of a doll-like Pokémon coming to life because they were thrown away is farfetched enough, so using Banette in this list isn’t that bad.

But anyway, Banette is a great Pokémon for your team if you’re looking for a strong Ghost-type with a grudge. 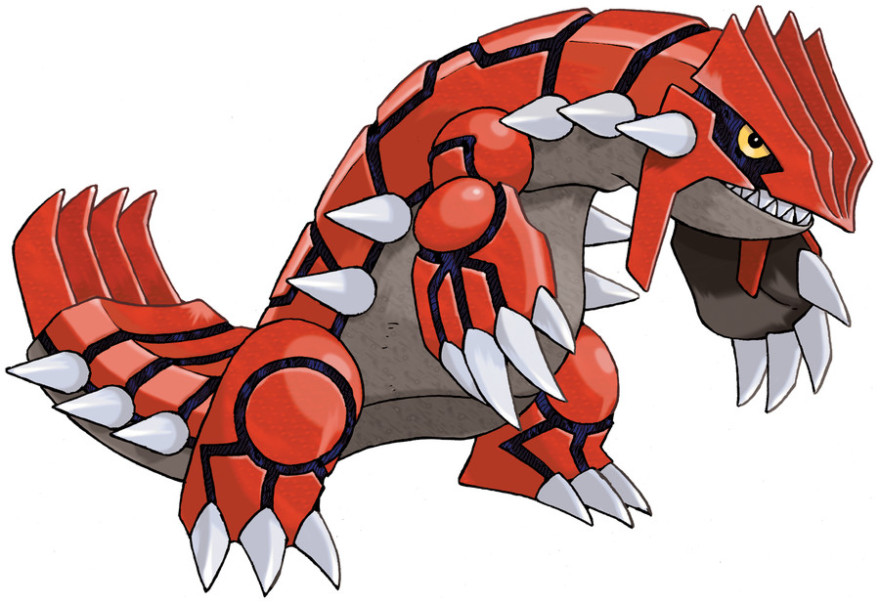 The last of our three kind-of-a-bear entries, here’s Groudon. Now, unlike Smoochum and Banette, Groudon certainly has the right kind of stature to be a bear.

Known as the “Continent Pokémon” in their Pokédex description, Groudon is one of the three Pokémon in the weather trio (alongside Kyogre and Rayquaza).

Team Magma try to capture and use Groudon to lowering the sea level and create more habitats for land-based Pokémon.

Though Groudon has bear attributes, such as their claws, their biology is supposed to represent a dinosaur, rather than any woodland animal that exists today. 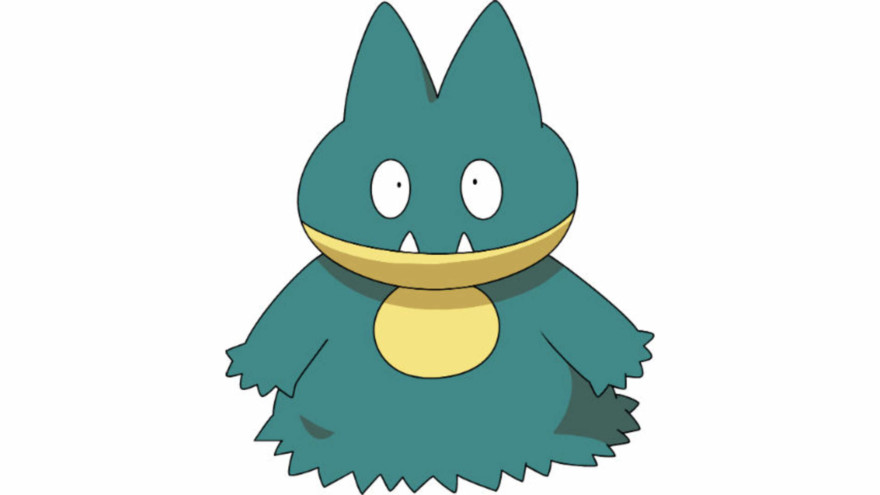 Before Generation IV was released, Snorlaxwasn’t known to evolve from any Pokémon. But this baby Pokémon definitely has a lot of the features of Snorlax, and both are easy to identify.

Munchlax is known as the “Big Eater” Pokémon and can evolve into Snorlax when they are leveled up with high enough friendship levels.

Because Munchlax’s evolution relies on friendship, it’s difficult to know what level your Munchlax will evolve into Snorlax. As such, be aware that the last move Munchlax can learn is Last Resort at level 52.

Most of Munchlax’s moves are Normal-type, with the appearance of one Psychic-type and two Dark-type moves during their learnset. 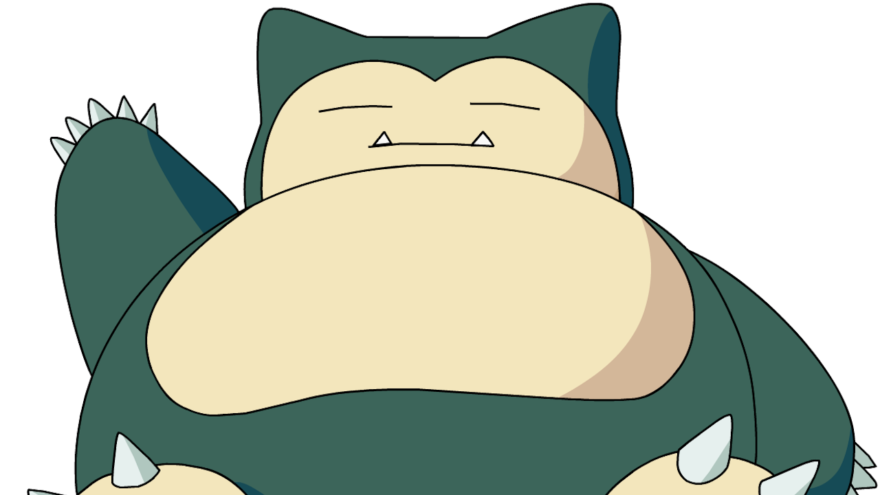 Unlike Munchlax, Snorlax has been around since Generation I, blocking your pathways and making you take the long way around to get to the next town.

This inconvenient but iconic event occurs in all Generation I and II games, including their remakes. It also appears in Pokémon X and Y.

Known as the “Sleeping Pokémon,” Snorlax can only be awakened by the sound of a Poké Flute. And for some reason, there’s only one knocking around, and you have to obtain it so that you can move Snorlax out of the way.

Snorlax’slearnset is hugely different to Munchlax’s – so, as we’ve mentioned, be careful about when you decide to let Munchlax evolve. 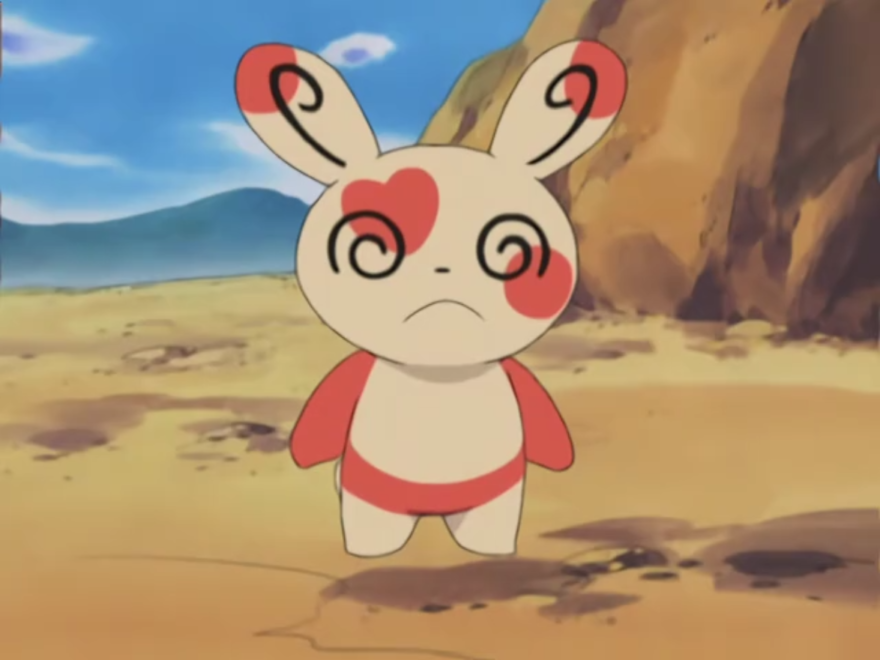 From Generation III, it’s everyone’s favorite dizzy bear. Spinda is not known to evolve and doesn’t have any alternative forms.

This Normal-type Pokémon is classed as a panda bear, though one of unique coloration. Spinda is based off of a red panda, and has some rabbit-like features, while the swirling patterns on their body lend themselves to the design of this Pokémon.

Spinda has two extremely powerful attacks. Both come in at 120 power and are physical attacks from the Normal-type set. Double-Edge, which Spinda learns at level 46, is the lesser of these two attacks because your Pokémon will receive recoil damage from using it.

The second move, Thrash, is learned at level 55 and continues for two to three turns per use. 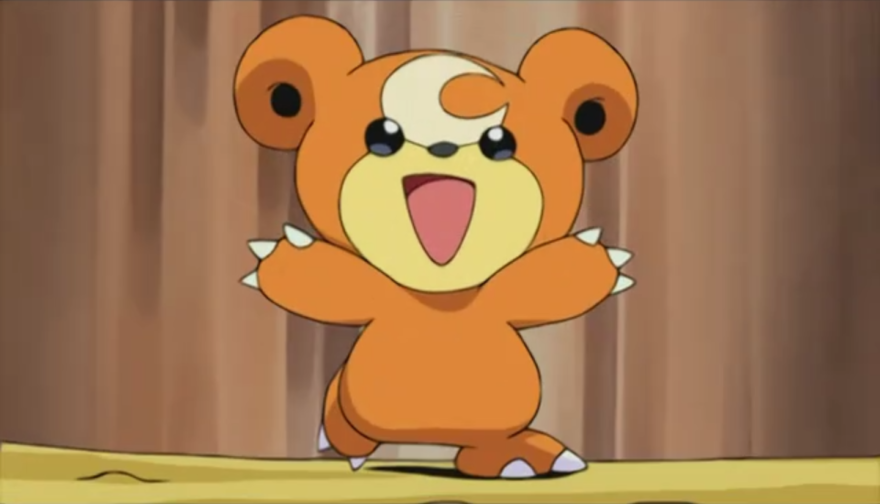 First appearing in Generation II, Teddiursa is the “Little Bear” Pokémon. This brown bear is very cute and is known for its shy disposition. With large, black eyes, a crescent moon adorning their head, and big, round ears, it’s obvious that Teddiursa was designed to be a cuddly bear Pokémon for Pokémon fans to love.

Teddiursa appears several times throughout the manga, anime, and movie adaptations of Pokémon.

A lesser-known appearance of this Pokémon comes in the form of Pokémon Channel – a game for the Nintendo GameCube. Teddiursa was one of the main companions of the Pichu Brothers on the anime channel. 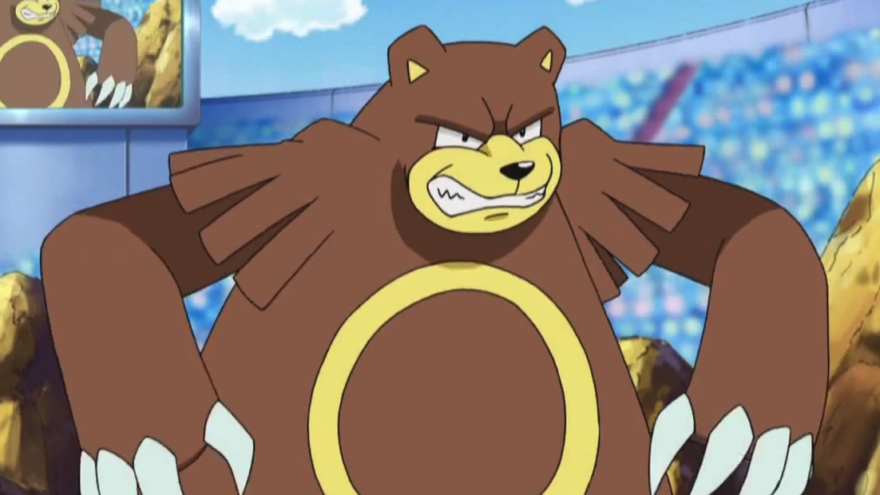 Ursaring is the most bear-like Pokémon on this list. You can get your own Ursaring by leveling up your Teddiursa to level 30. Ursaring is a tall Pokémon, with long claws, and a golden-yellow ring on its torso.

Once naturally evolved, Ursaring will only have five more moves to learn in their learnset. These are Scary Face, Rest, Snore, Thrash, and Hammer Arm.

The last move, Hammer Arm, comes about at level 67, and is one of only two Fighting-type moves that Ursaring can learn. 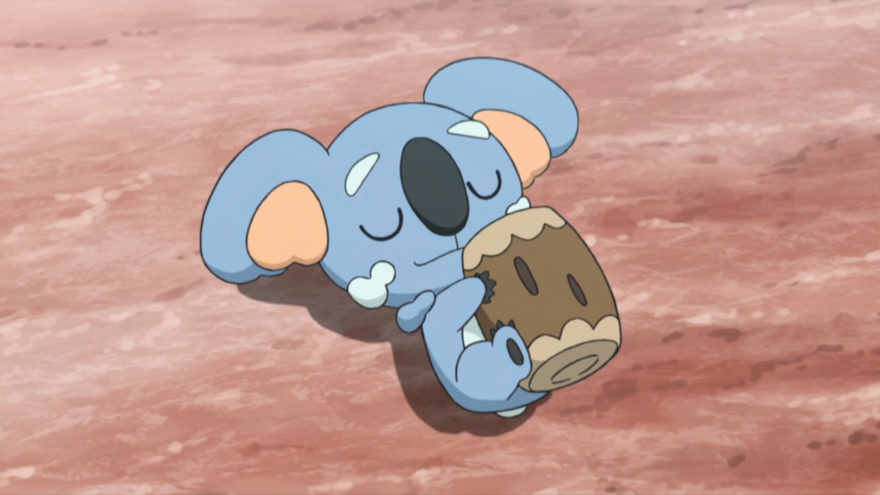 Komala, the koala bear Pokémon. This Normal-type Pokémon is known as the “Drowsing Pokémon” and appeared back in the more recent Generation VII. Komala is a gray Pokémon with large ears and white fur on its cheeks.

This Pokémon is typically seen holding a small log. Pokémon lore tells us that Komalas are given this log when they are born.

This Pokémon has a unique attribute where they stay asleep for their entire lives.

Your Komala will never wake up, yet they will be somewhat aware of their surroundings. They can eat, walk, and fight as every other Pokémon can, but they’ll never open their eyes. 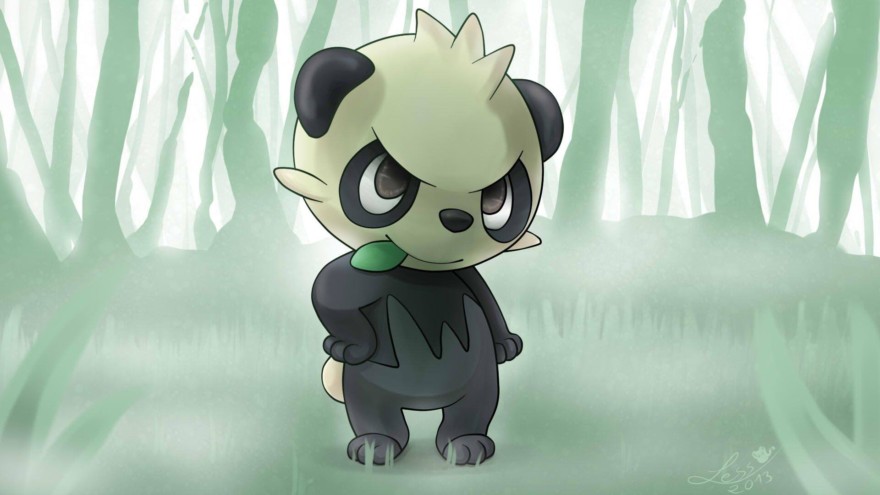 Anime fans who enjoy a slice of life and high school anime series will recognize the swagger that Pancham carries around.

From the leaf they hold in their mouth to the expression on their face, this panda bear Pokémon means business. As a Fighting-type Pokémon, Pancham is sure to get into a scrap or two.

Pancham evolves into Pangoro at level 32, but can only do so if you have a Dark-type Pokémon in your party at the time.

One of the strongest moves this panda will learn comes a few levels before they evolve. At level 28, Pancham will gain the ability Vital Throw.

This is a Fighting-type move that forces Pancham to be the last to attack so that they can get a good hit in. 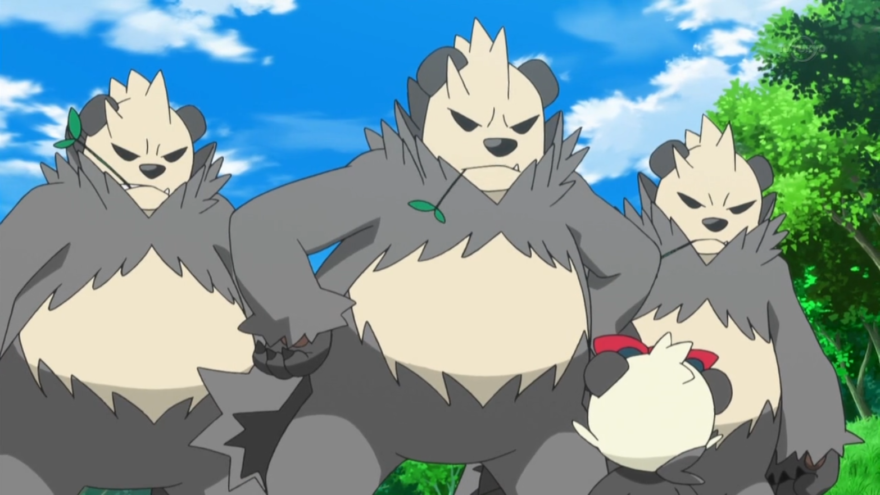 One of the top bear Pokémon available, Pangoro was released with the rest of the Generation VI Pokémon.

When Pancham evolves at level 32, they take their Fighting-type attributes and bounce those off of the Dark-type in your party to create the Fighting/Dark Pokémon that is Pangoro.

This was definitely an interesting way for Nintendo to introduce a type change in a Pokémon when they evolved.

Pangoro looks like a regular panda bear, albeit an angry one. They take the troublemaker expression of Pancham and turn it into something a bit more sinister. Pangoro stands on their back legs, fists raised, while their built-in cape trails out behind them. 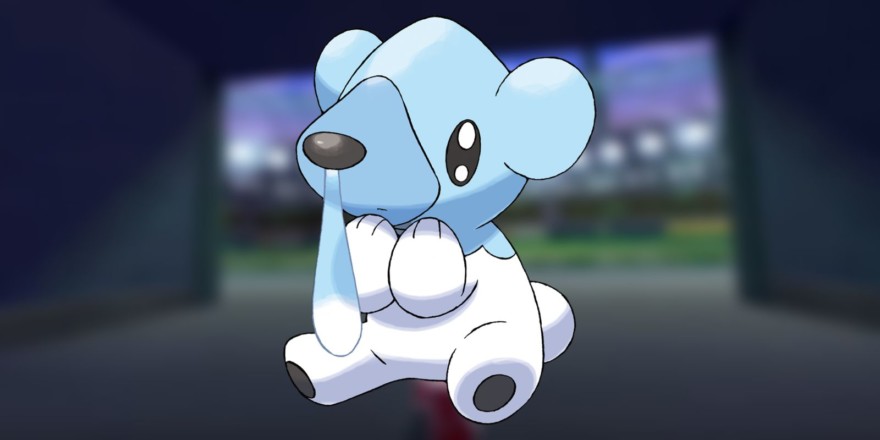 The first Ice-type bear Pokémon to be released into the Pokédex, Cubchoo is a shy polar bear Pokémon.

Cubchoo was introduced back in Generation V and evolves in Beartic at level 37. They’re a light blue and white Pokémon with dark eyes and a dark nose that drips blue mucus. 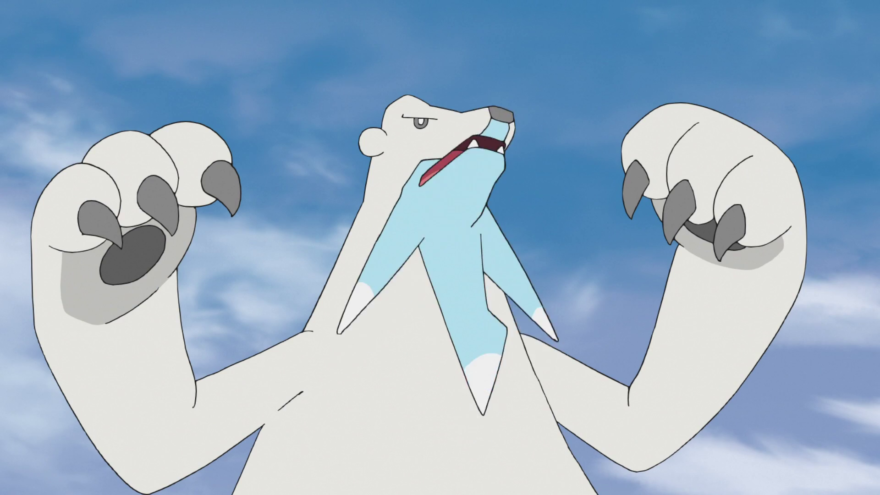 The evolved form of Cubchoo takes on an appearance that is part angry polar bear, part yeti.

They’re blue-white in color and have three spikes of ice hanging from their jaw in a makeshift beard.

After evolving, Beartic doesn’t have many moves left to learn. They’re a powerful Pokémon and are more bear-shaped than many of the other “bear” Pokémon we could find. Their strongest move is Superpower at level 51. 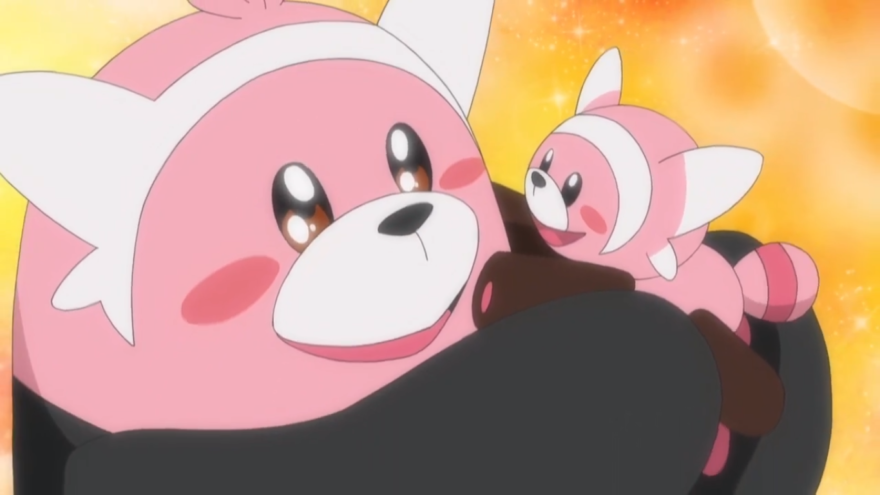 Not quite your standard bear, Stufful was created with a red panda bear in mind.

This Pokémon is a dual-type of Normal and Fighting attributes and is a fan favorite among bear-like Pokémon. Stufful evolves at level 27.

Though their learnset isn’t very varied, Stufful has several hard-hitting moves, even before evolving. One of the strongest is Take Down, which your Stufful will learn at level 24, with its power rating of 90. 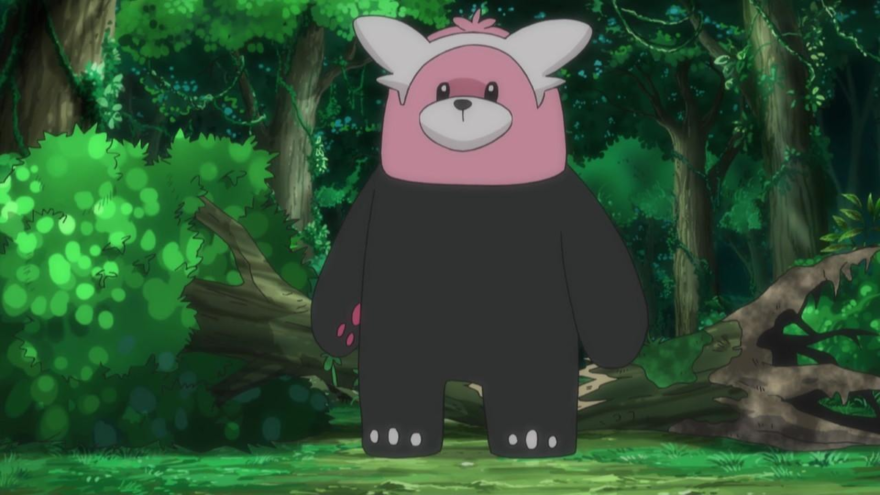 There isn’t too much difference in the design of Stufful and Bewear.

Stufful evolves into Bewear at level 27, and though their features don’t change much, they do get to stand up on their hind legs and become even cuter.

Bewear can learn two power moves in their later levels. These are Double-Edge and Superpower.

Both have a power rating of 120 and 100% accuracy. Although Superpower can only be used five times, while Double-Edge can be used 15 times.