Babies usually mean a lot of fun for those who surround them, and the Pokémon world is no exception to this. Some of the most interesting species introduced so far belong to this group, and, today, we’ll bring you a list with the 16 best such Pokémon. 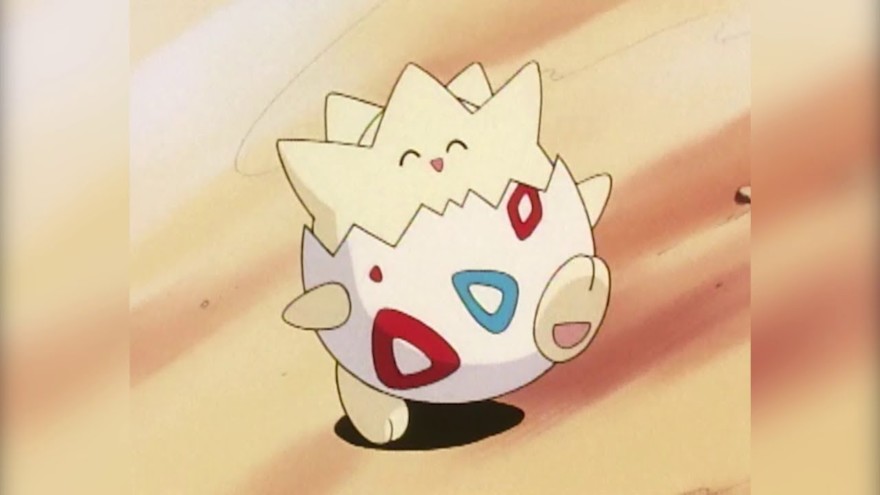 We’ll start today’s top with the original baby Pokémon. Togepi made its debut in the Kanto saga of the anime before the Gold & Silver games were released, making it one of the first two Pokémon and Ho-Oh to be revealed ahead of its generation. It’s also the only baby Pokémon to be revealed before its evolved form.

It had a major role in the original series as one of Misty’s Pokémon, but, despite showing some potential, it never participated in a battle and behaved like a real baby most of the time.

Riolu made its debut in Generation IV as the pre-evolution of Lucario, which had made its first appearance in the franchise’s eighth movie.

It would have a major role in two episodes of the anime that focused on the Pokémon Ranger. There, an especially trained Riolu was being pursued by Pokémon hunter, and Ash and his friends helped return it to its kingdom.

As a curious fact, it’s the only baby Pokémon with an evolution that’s capable of mega-evolving. 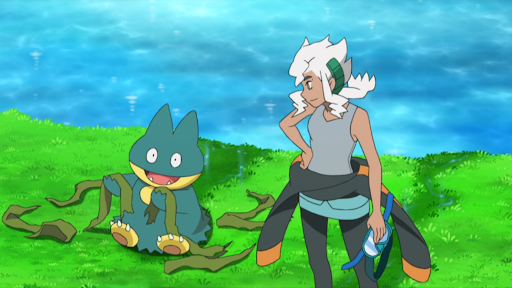 The Big Eater Pokémon belonged to Generation IV as well and was introduced as the previous form of Snorlax while also being the first species of its generation to be revealed.

With its final form, the Pokémon that eats the most, as was evidenced during the Hoenn seasons as May caught one, in part because it was the only Pokémon that liked her Pokéblocks.

Despite having one of the lowest speed stats, its versatility and high HP make it a valuable asset for any trainer. 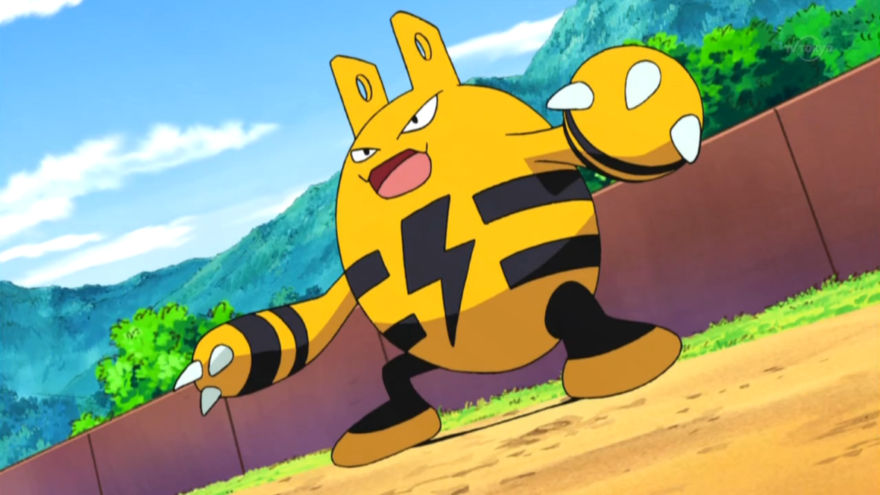 The Electric Pokémon makes its name justice by having two horns that resemble a power plug on its head along with a black lightning bolt mark on its chest.

Elekid made its debut in Generation II as Electabuzz’s previous form and received a second evolution in Generation IV in the form of Electivire, arguably one of the best Electric-type Pokémon.

In the anime, it had a major role as one of Paul’s Pokémon during the Sinnoh seasons, where it stood out by reflecting its trainer’s attitude. 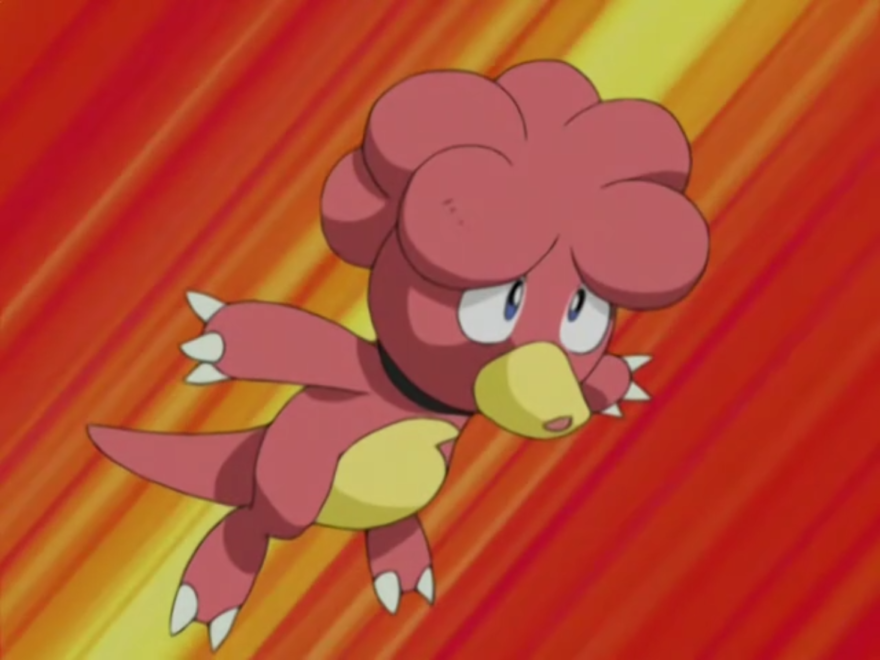 Magby and its evolutionary line is the equivalent to that of Elekid; just like it, Magby was introduced in Generation II as the baby form of Magmar and later received a new final form in Generation IV, Magmortar, one of the most powerful Fire-type Pokémon.

Its appearance resembles that of a booby with some salamander-like elements, and, as a curious fact, despite its potential in battle, its performance in the Pokeathlon is among the lowest of all Pokémon. 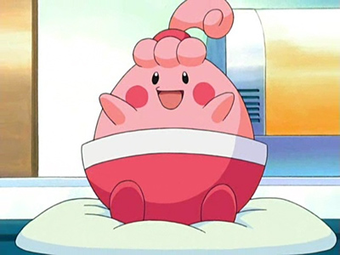 Happiny’s Attack and Defense are among the lowest of any Pokémon. However, it makes up for it as it reaches its final form, Blissey, which has the highest base HP among all species.

Despite its adorable appearance, it was shown in the anime that it had incredible strength, as Brook’s Happiny would always carry around heavy things without too much trouble.

Its evolutionary line is the only one that requires special conditions twice, as Happiny needs to carry an object to evolve, and then it needs a high friendship level to evolve again. 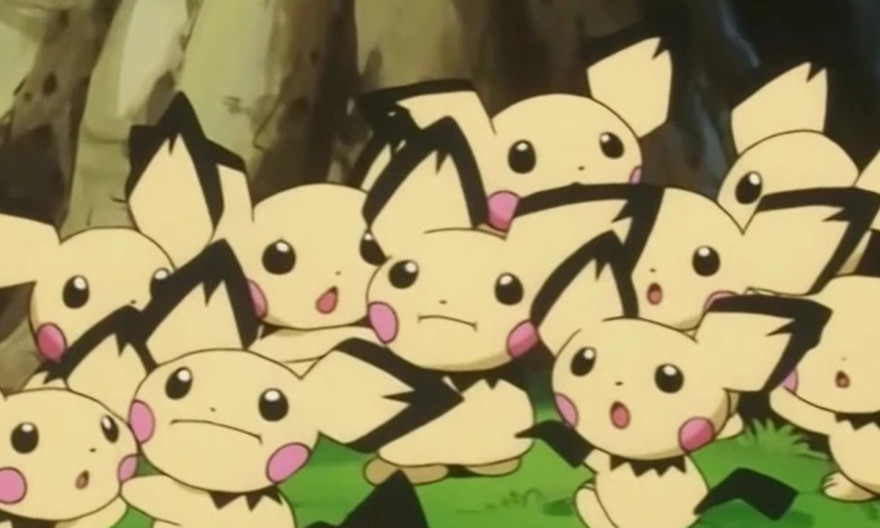 As the baby form of the franchise’s mascot, Pichu was guaranteed a spot in this list, but there’s so much more to it than just that.

Pichu has had various relevant roles in the anime and the games. The Pichu brothers, the spiky-eared Pichu, and a shiny Pichu have made various appearances in the series over the years, while the Ukulele Pichu is the player’s partner in Pokémon Ranger: Guardian Signs, and, most recently, it was revealed how Ash’s Pikachu evolved from a Pichu in the anime.

So, in short, this Pokémon has a lot to be talked about. 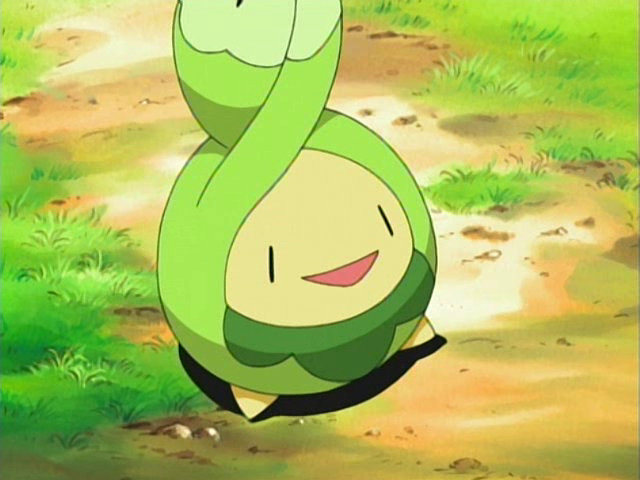 Budew made its debut in Generation IV and its final form, Roserade, to complete Roselia’s evolutionary line. Its appearance is based in a rosebud that blossoms as it continues to evolve.

It made various appearances during the Diamond & Pearl series as Nando’s main Pokémon and quickly evolved into a Roselia. 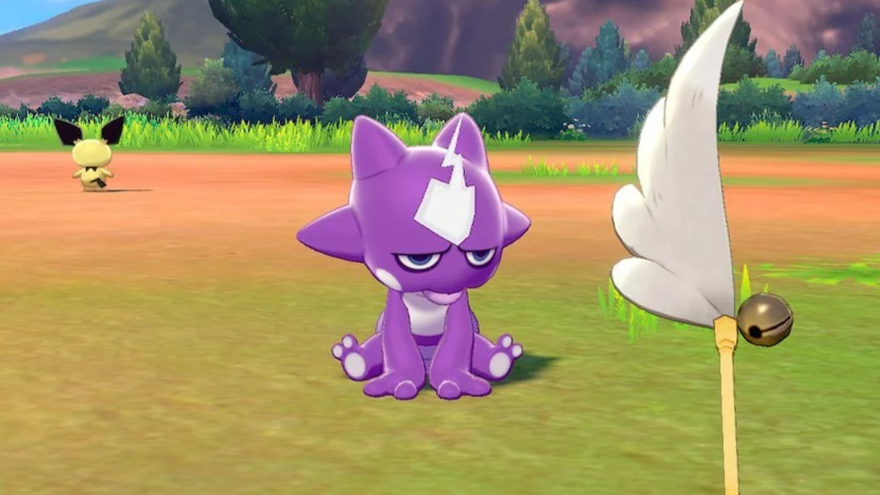 The most recent addition to the baby Pokémon category, Toxel was the first such Pokémon to be introduced since Generation IV and is probably the less cute one among the group.

Toxel is the third baby Pokémon to have made its debut and its evolution. It’s the only one that can evolve into two different non-regional forms of the same Pokémon.

Along with Toxtricity is the only Pokémon to have the Electric/Poison type-combination and, so far, is the only baby Pokémon that hasn’t made an appearance in the anime. 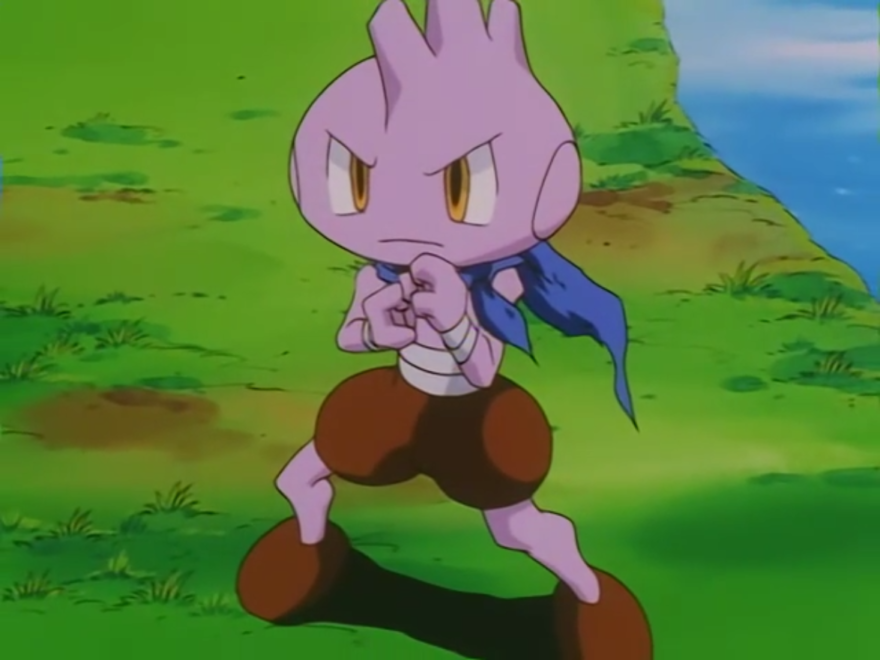 The Scuffle Pokémon made its debut in Generation II as the baby form of both Hitmonlee and Hitmonchan, while also being introduced alongside its third possible evolution, Hitmontop.

While all of its final forms are based on professional wrestlers, Tyrogue’s design resembles that of school wrestlers, which shows its lack of experience.

Tyrogue is the only baby Pokémon that can evolve into different species and is also the only Pokémon whose evolution depends on its stats. 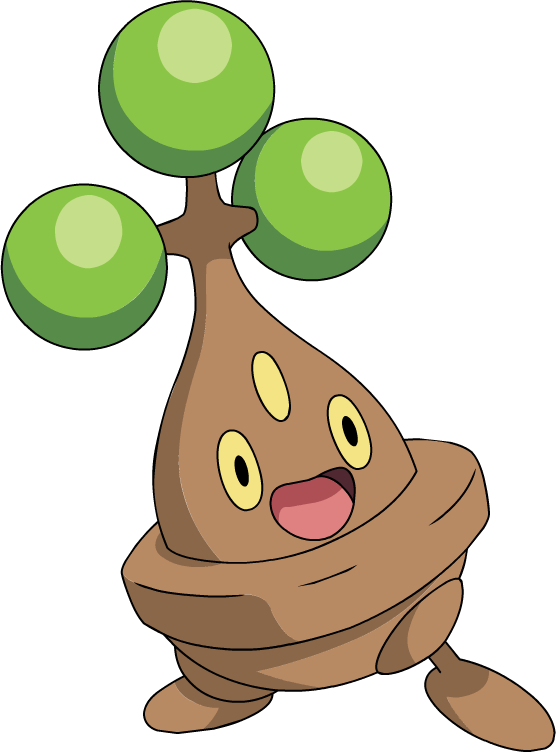 The Bonsai Pokémon is probably the one that most resembles a real baby when it comes to the way it behaves.

In the anime, Brook owned a Bonsly and had to feed him off a bottle until it was able to eat solid food. The young Bonsly also showed a childlike behavior at first, and it was prone to crying but was able to mature with time.

However, this habit is caused by a need instead of emotion. As moisture tends to accumulate in its body, Bonsly cries to release it through its tears and sweat, and this proves to be useful in battle as it makes its opponents let their guard down. 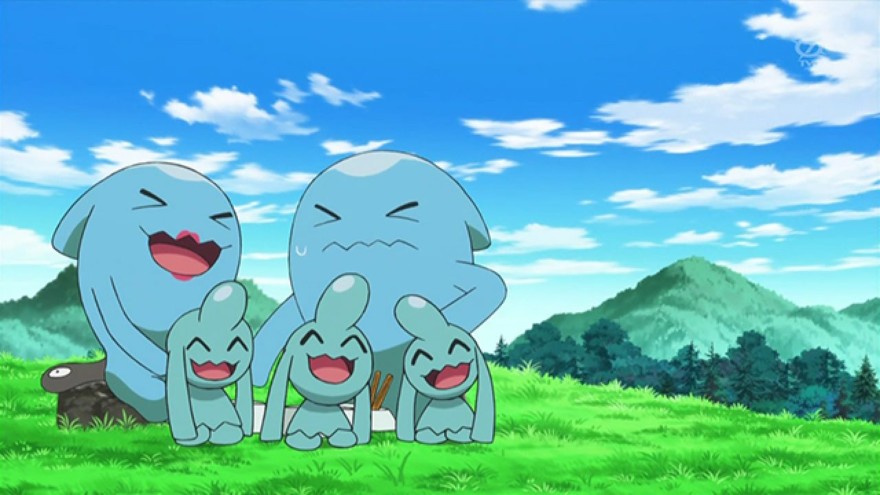 Wynaut is a Generation III Pokémon introduced as Wobbuffet’s previous form and had some amusing encounters with the Team Rocket’s iconic Wobbuffet during the original series.

It’s one of the few Generation III Pokémon to make its debut before the release of the Ruby and Sapphire series, as a wild Wynaut made recurrent appearances in the anime, where it followed Ash and his friends.

Much like its final form, its appearance seems to be based on a Japanese doll, and its name comes from the phrase “Why not?”.

Among baby Pokémon that evolve by leveling up, Wynaut is the one that requires less training, as it reaches its final form starting at level 15. 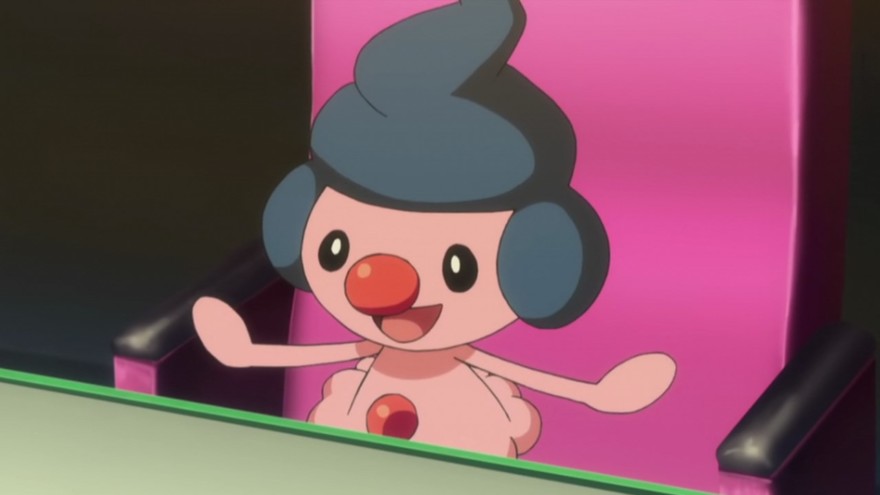 One of the most entertaining Pokémon in our list, Mime Jr., made its debut in Generation IV and, along with Bonsly, is the only baby Pokémon that needs to learn a specific move to evolve, which is Mimic.

It had a major role in the anime as one of James’ Pokémon, and it quickly developed an affection towards its trainer. With Team Rocket, it regularly imitated people and inserted itself at the end of their motto.

Among baby Pokémon, Mime Jr. is the only with a direct evolution that has a regional form, as Galarian Mr. Mime and its new evolution, Mr. Rime, were introduced in Generation VIII. 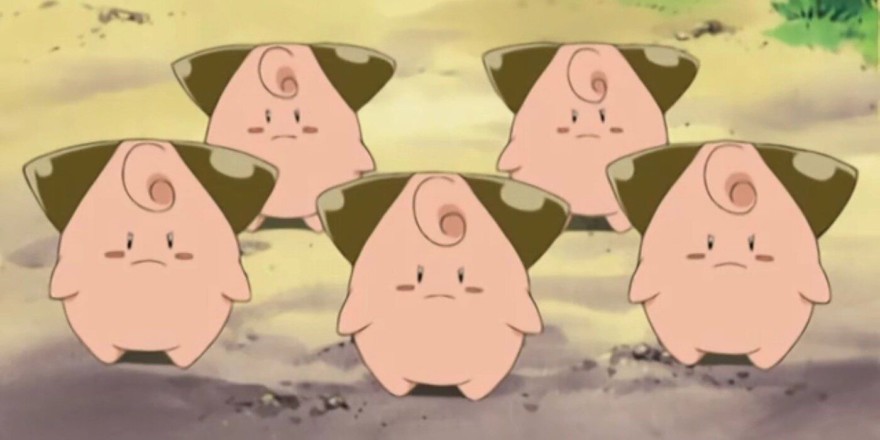 Cleffa was introduced in Generation II, and it became known in the anime that it was an extraterrestrial Pokémon as it was revealed that Cleffairys come from the moon and are capable of piloting alien spacecraft.

Because of this, the Star Pokémon is often found close to places where there have been meteor impacts.

In the anime, Lusamine has a Clefable that she has owned since it was a Cleffa, and the Pokémon also had a role in an episode related to spaceships. 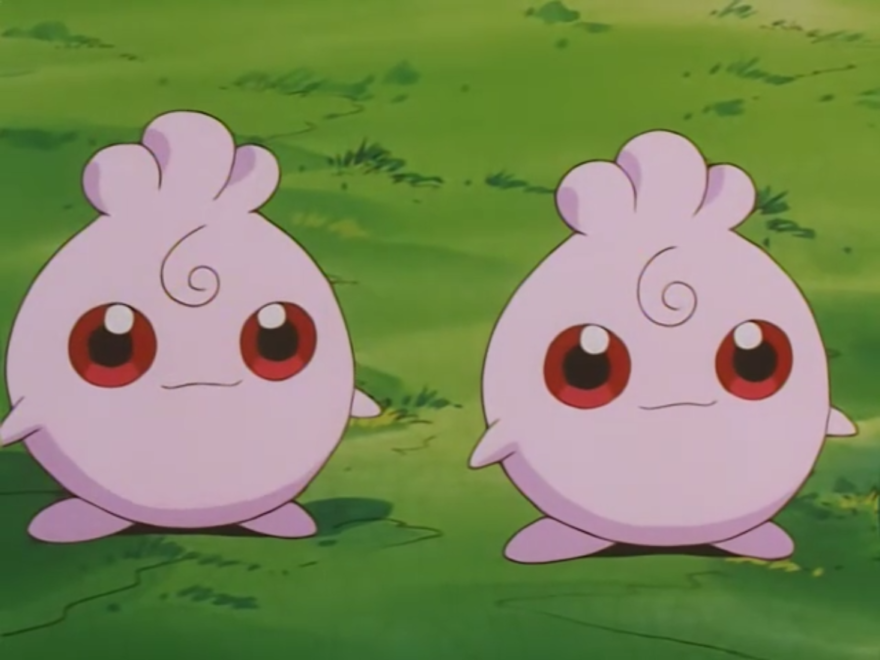 The Balloon Pokémon is very similar to Cleffa as they share the same type combination, the way they evolve into their second and third forms, and their base speed stat, but its origin is much simpler than that of Cleffa, as Igglybuff is simply based on a balloon, hence its category.

And, though it hasn’t had many important roles in the anime or the games, its evolved form, Jigglypuff, will be remembered by old-school fans as a wild Pokémon that regularly followed Ash and his friends in an attempt to perform its song without them fallings asleep, but it would fail most of the time and ended up scribbling on their faces. 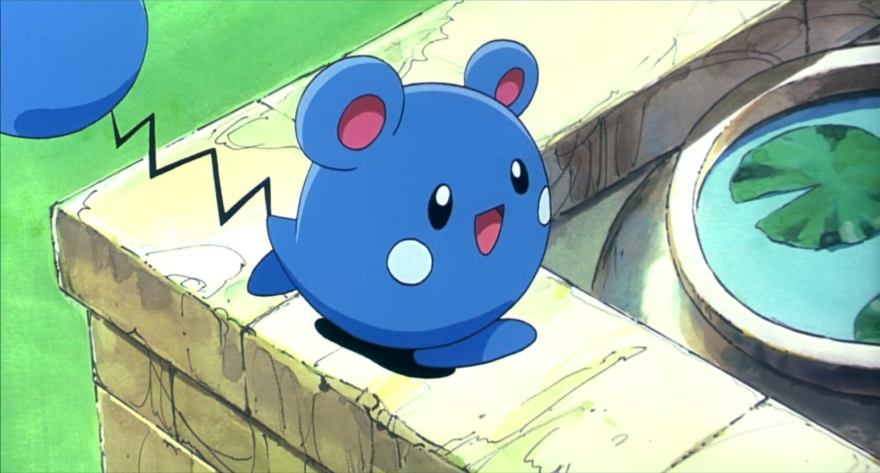 Azurill’s among the cutest Pokémon, regardless of the group its placed in. However, its base stats are among the lowest of all species, and that makes it finish at the bottom of our list.

Still, since its debut in Generation III, it has been one of the most recurring Pokémon in the games, along with its evolutionary family, and fans of the anime might remember the one that Misty received from Tracey.

Its category, Polka Dot Pokémon, is a reference to the way polka dots are called in Japan, which, when translated, literally means “water balls.”

By and large, the baby Pokémon has had a huge impact in the franchise and has been among the species that have made the most appearances in the series, usually as part of one of the main characters’ team.

And, while most of them are adorable, they also have great potential and can become powerful Pokémon when they reach their final forms and help any trainer to have an incredible team. So, if you have an open spot in your roster, we recommend you take a look at any of the Pokémon we presented here!

[…] Generation IV was released, Snorlaxwasn’t known to evolve from any Pokémon. But this baby Pokémon definitely has a lot of the features of Snorlax, and both are easy to identify. Munchlax is known […]