Most players generally agree that Borderlands 2 did what any video game sequel should do. It took what made the original game good and improved upon it, while also adding some things that the original was lacking (like an actual plot, for instance).

Nonetheless, every game has something that can be improved upon.

Given how long Borderlands 2 has been out, and how massive the Borderlands fanbase is, it’s unsurprising that there are now countless mods for players to choose from to iron out the game’s few flaws.

Below, we’ve listed ten of our favorites. 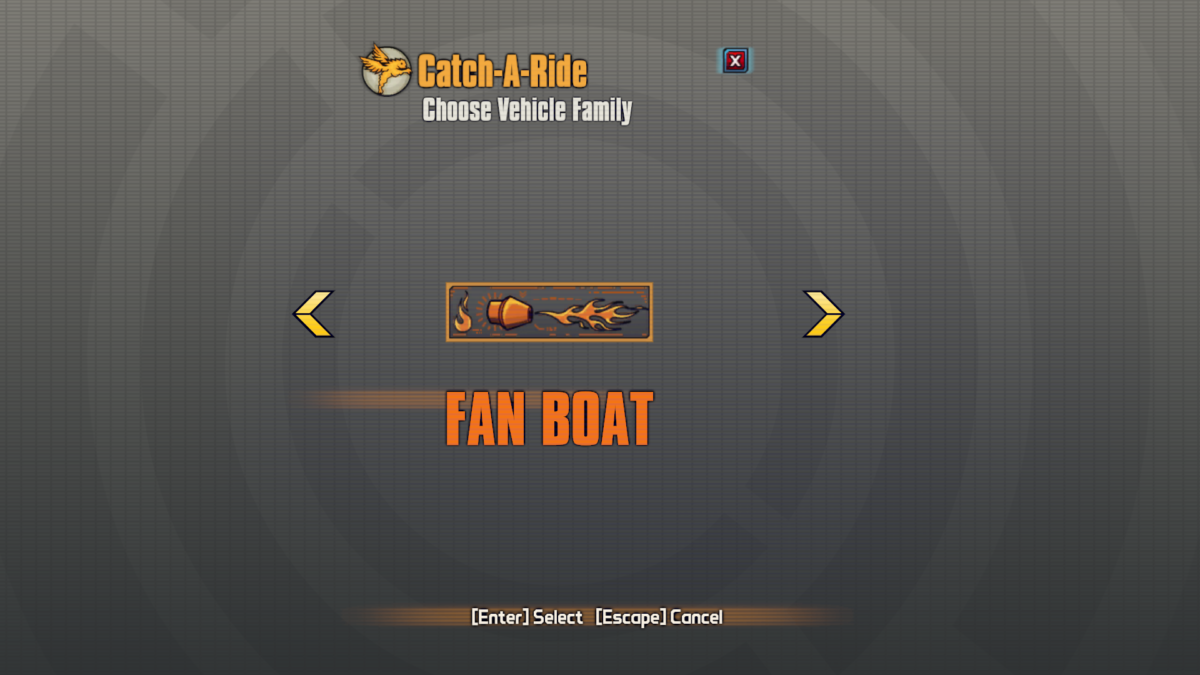 I’m sure all of us remember when we first played Borderlands and finally got access to our first vehicle. However, over time, waiting to gain access to all vehicles is annoying.

So, the More Vehicles mod offers players with the ability to choose from all the vehicle families in Borderlands 2.

With this mod, you will have access to the 11 different vehicles already in the game.

Also, the More Vehicles mod allows players to go where they normally couldn’t with vehicles.

So, the limitations of driving placed in the vanilla game will no longer exist with this mod! 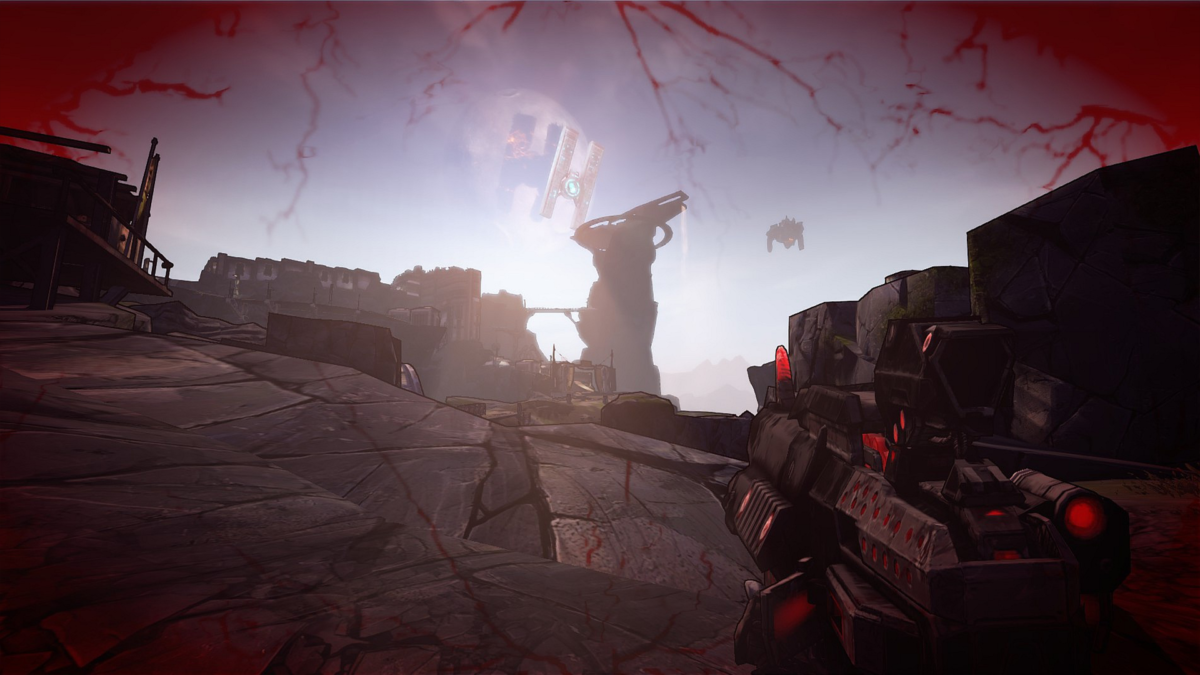 Made with PythonSDK, this mod is definitely one you will want to download if you want to reexperience Borderlands 2 in a whole new way!

The Borderlands 2 Exodus (SDK) mod includes over 130 new pieces of gear to use, brand new rarities, and a complete rebalance for all damage types. And the new gear pieces do not replace any gear already in the game!

There are also new mini-bosses and special effects to fight and learn about with this mod.

Now, Vault Hunters will excel more and be worse at certain things while having access to better shields and rebalanced weapons.

11. All Character Head and Skins 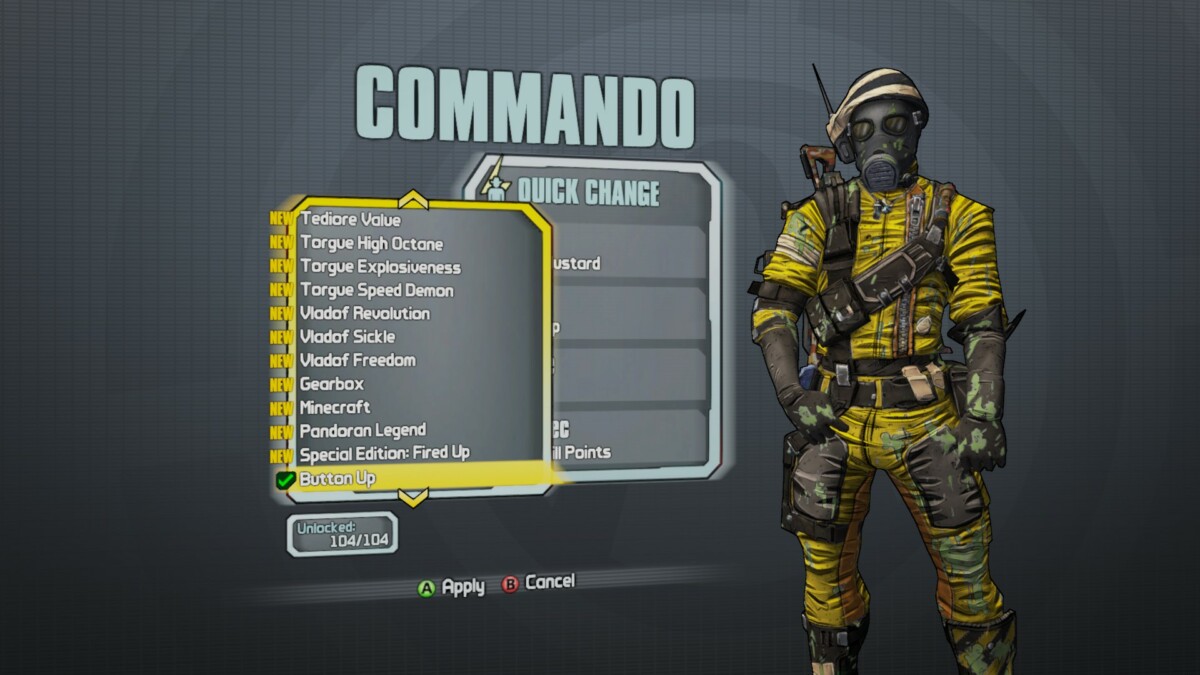 One of the first things you do when start-up Borderlands 2 is customize your character. However, the choices can be pretty limited because not everything is unlocked.

The All Character Head and Skinsmod fully unlock the 104 available in-game skins and accessories you can equip onto your character for all characters.

So with this mod, you’ll be able to start your Borderlands 2 play file from the start with the cool appearance you want, including the Gearbox skin, the Poker Night heads, and the Commander Lilith head and skins. 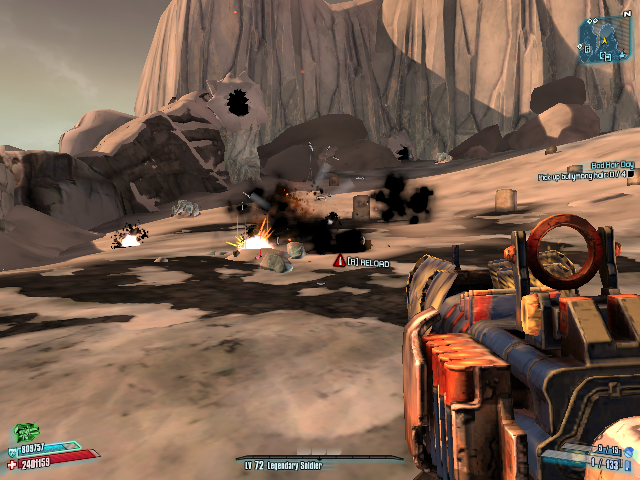 Now, sure, Borderlands 2 isn’t exactly a new game. However, there are still PCs out there that struggle to run it satisfactorily between the large maps and swarms of enemies that are often onscreen.

And that’s a serious shame, because no FPS fan, no matter their PC budget, should be denied the chance to try a game as iconic as Borderlands 2.

The Ultra-LowConfig mod simply tweaks the game’s graphics to make it run smoother. It’s ideal for budget gamers who want to have their go at playing this highly influential FPS game.

We’re putting this one near the bottom because it should really only be used by people who really need it.

In short, the Level 72 Character Game Saves Mod provides you access to fully leveled-up versions of all the game’s characters.

Ideally, this is something that you should play the game to access. It’s not much fun skipping to all the rewards without any of the challenges.

However, perhaps you’re busy – many of us are – and don’t have time to grind every single character to its completion.

In that case, a mod like this can be a handy way to experience the leveled-out versions of characters you find more challenging to grind with. 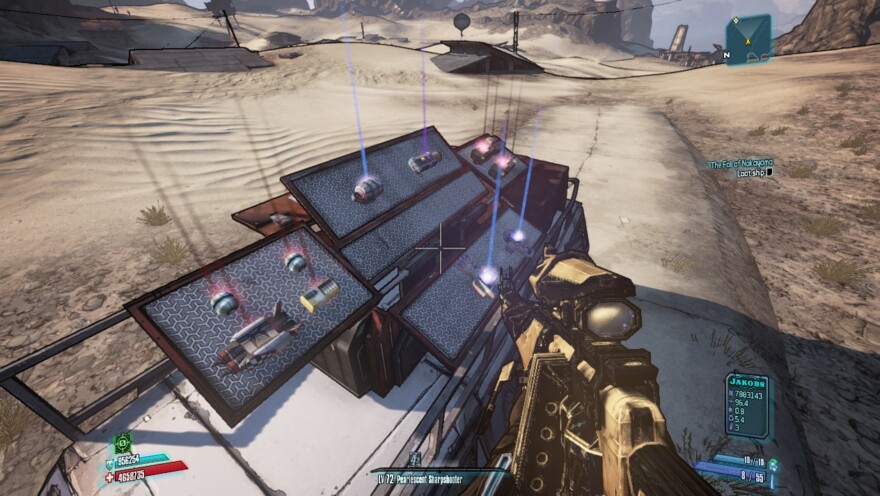 Borderlands 2 is a game that’s all about the looting. Half the thrill of gunning down every set of enemies is wondering what loot will fall out of their corpses; and half the fun of trekking across Pandora is finding new stashes to dig through.

Even when you find stuff you don’t need, there’s a certain thrill of discovery to the whole process.

But when it comes to loot-centric games, there’s one law that applies universally: more is more. The More Chests mod…uh, adds more chests to the game world. More chests mean more stuff to look for, and more to find. What more could a loot-hungry Vault Hunter need?

This one’s similar to the Difficulty Mod, but a bit more specific.

In short, as the name implies, it allows you to multiply enemies, as well as some bosses, by up to four each.

It’s ideal for when you want to up the game’s challenge, but don’t quite feel ready to play as if there are two or three other players with you at all times.

Sure, as mentioned, one of Borderlands 2’s improvements over the original game was that it actually had a substantial story. However, a game with as many potential playstyles and character builds as this one has a lot of replayability.

And, well, having to sit through the same cutscene over and over gets pretty tiresome once you’re familiar with it.

As the name implies, the No Intro mod automatically skips the three very lengthy intro videos that the game opens up with. It’s great for players who crave a repeat of that Borderlands 2 experience but have the whole opening memorised by now. 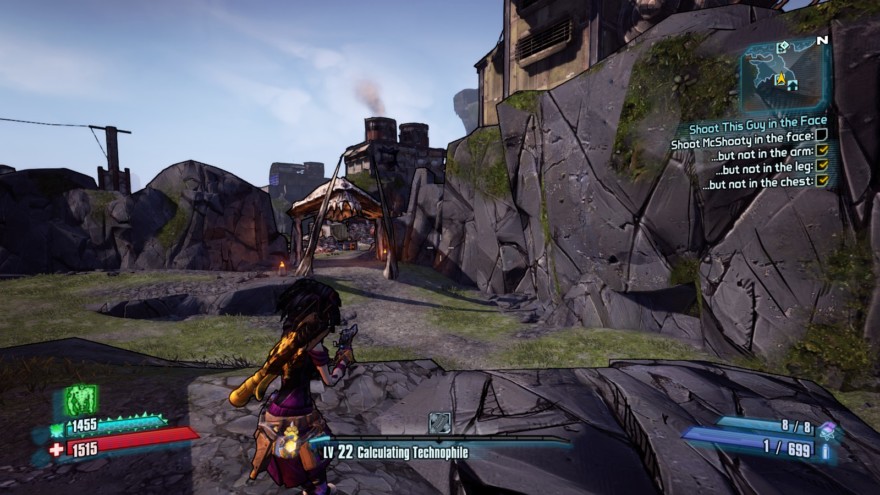 The Third Person mod, well, lets you play Borderlands 2 from a third-person perspective.

This may seem a bit blasphemous at first, considering Borderlands has always been solidly established as an FPS series. However, the new perspective it gives on the game can make it feel like a whole new experience.

The Borderlands series has always had strong RPG elements, after all, and given how many RPGs are played from a third-person perspective, it can start to feel quite natural before long.

The playable characters in Borderlands 2 have some really nifty designs and tons of customization options aside. It’s nice to actually be able to see them in the game world, rather than just on the main menu. 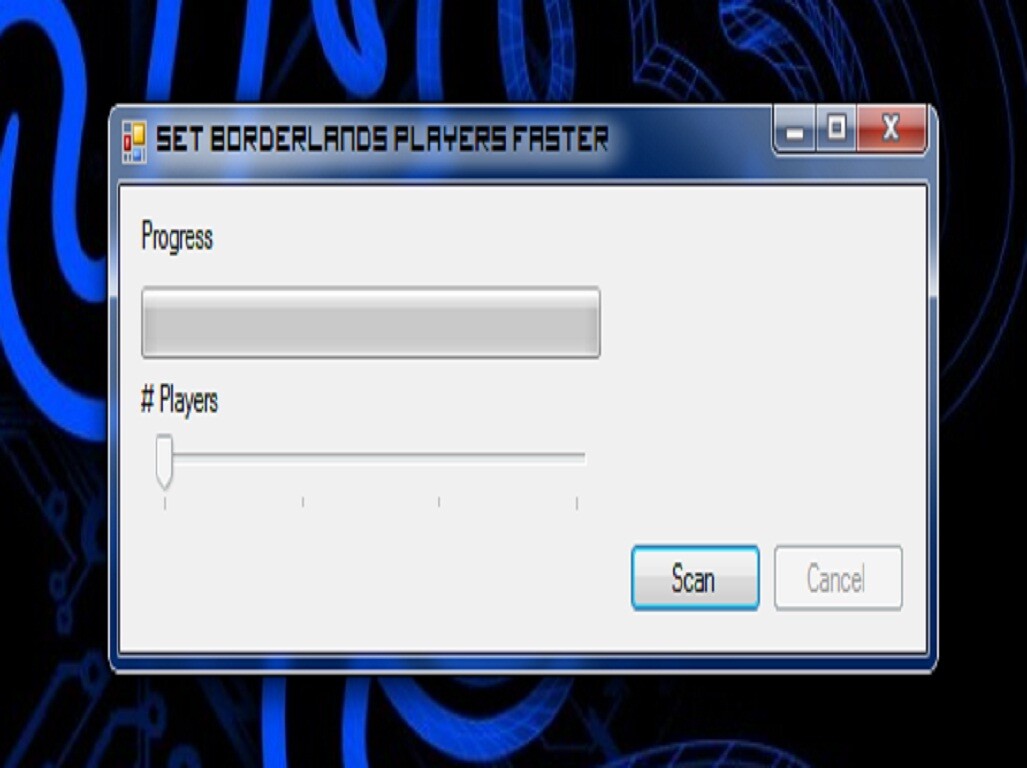 Borderlands 2 certainly isn’t what one would call an easy game. However, once you’ve played your way through it enough times and gotten used to its mechanics, the challenge can start to feel kind of tempered.

It’s for just such occasions that the Difficulty Mod was created. As every player knows, all the Borderlands games feature co-op modes. With this Mod, a single player can trick the game into thinking there are more players participating.

This, naturally, cranks up the game’s difficulty to accommodate these extra players. It’s an ideal way to give the game some fresh challenge for seasoned Borderlands players. 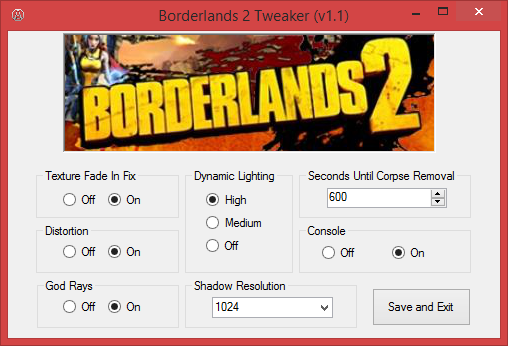 Any modern game will offer the players an options menu. However, these options menus – especially the older ones – can be somewhat limited and don’t always allow you full access to the smaller details of the game that can potentially be tweaked.

In short, the Borderlands 2 Tweaker mod allows you to easily access the game’s .ini files, letting you tweak a variety of details that aren’t easily accessible otherwise.

Among other things, you can alter the smoothness of in-game shadows, turn off “God Rays” emanating from the game’s skyline, and tweak how long it takes for corpses to disappear.

It’s ideal for when you’re running the game on a more low-end engine and are looking to get a less resource-hogging Borderlands 2 experience. 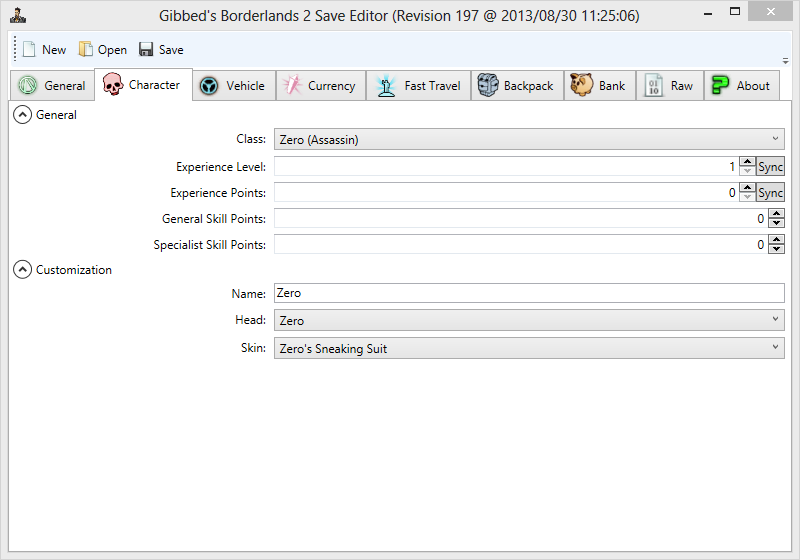 Save editors are another staple mod of triple-A games with big fanbases. Borderlands 2’s leading one is Gibbed’s BL2 Save Editor.

With this, you can tweak a variety of things in your Borderlands 2 save files. You can change textures, add or remove things from your inventory, give yourself more money – tons of things. It can be a real asset once you’ve played through the game enough times.

After all, sometimes, an experienced player can see where a particular playthrough is going and might want to change things around a bit. 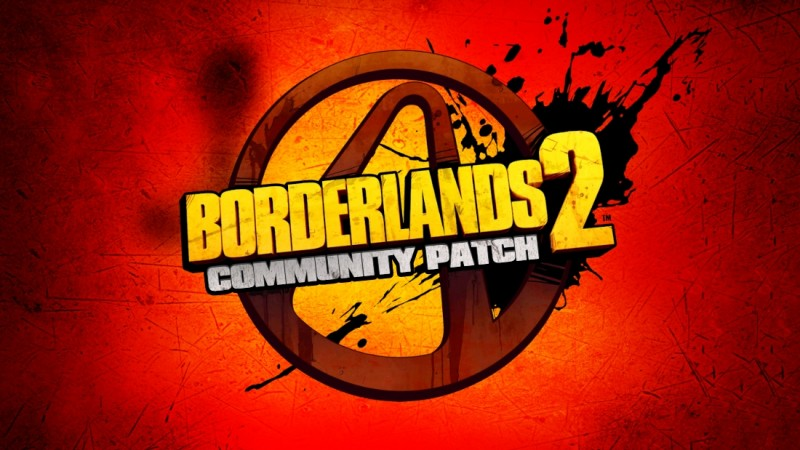 When they have a big enough fanbase and are around for long enough, most games have at least one major community-effort Mod. This is Borderlands 2’s.

Borderlands 2 isn’t what you’d call unpolished, but like any open-world game, there’s those bits and pieces that don’t work as well as they should. The Unofficial Community Patch fixes a great variety of known bugs and irons out several issues related to balance and gameplay.

It’s really the first Mod you ought to install, especially if you want to get peak Borderlands 2 experience from the beginning.