Released in 2020, Noita received a lot of positive criticisms and was nominated for best technology at the game developers choice award, most innovative gameplay at steam awards, and many more.

The game sees a witch with the ability to create spells fight mythical finnish monsters in a 2-D world.

The game is fun, entertaining, and blows terraria out of the park with its mechanics. Every pixel in the game is physically simulated, making it a stunning game to unravel as you play.

Here we will show you the top 15 best Noita mods to help you have a greater gaming experience than what the base game provides. 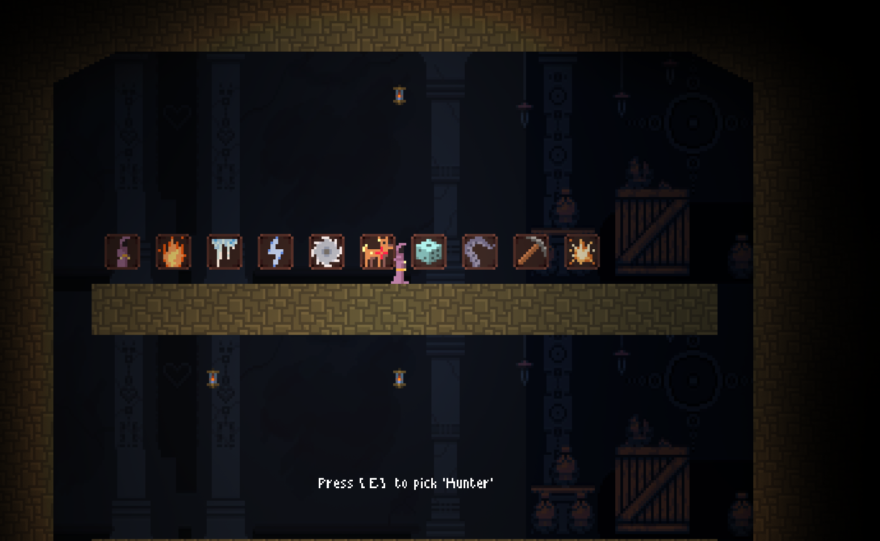 Enjoying different loadouts in games like entering the gungeon and having a similar experience in Noita? Well, look no further as selectable classes do just that.

It’s not that fun when you’re forced upon a class rather than having a choice to select which class you would like to commence your game with.

The mod allows players to choose their own class from options like pyromancer, tesla, hunter, and many more.

There are a total of 9 classes that will eliminate the randomness and the power of choice in your hands. 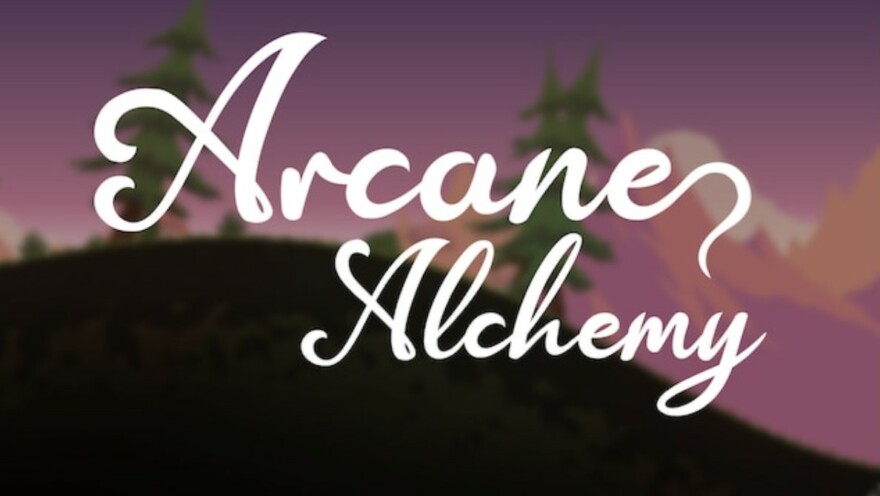 Let’s admit it; alchemy is one of the most important parts of the Noita experience, as we all love mixing some potions to create magic.

There is a potion by the name of “stop hitting yourself,” and you would’ve guessed what it does by its name, yes hit the host with extra limbs that grow upon splashing the potion. How cool does that sound?

Sometimes even the smallest of changes can make a big difference in the gaming experience. Quality of life does just that. Add music to boss fights, bring new mechanics, nerf enemies, and more using this mod.

The mod works on small individual changes, which eventually leads to a great gaming experience. It deals with gamers’ common issues in the game and improves areas where the game lacks.

The best change is closing off the exit to the holy mountain when you pass through so enemies can’t get to you. A much-needed change.

We agree that Noita is one of those games that you won’t get tired of looking at it. The game is absolutely a masterpiece with its graphics and visuals.

There is not much to improve when it comes to graphics. However, Noita RP mod can make things a bit…interesting.

Bring some magic visuals in the game by polishing particles. You can change the blasts from the wand to spectacular trails adding to the game’s overall fantasy. Bring some lights to the fights with Noita RP mod.

Step up your base game with Noita enhanced. Add more content to the game like lava transmutation, burning afterimage, perks for sale, and more.

You can find all the mods included in this bad boy, but some of the mods require activation separately.

You can now convert lava to alcohol using lava transmutation, which is new content, and purchase some perks from shops. It’s a great addition to the game. 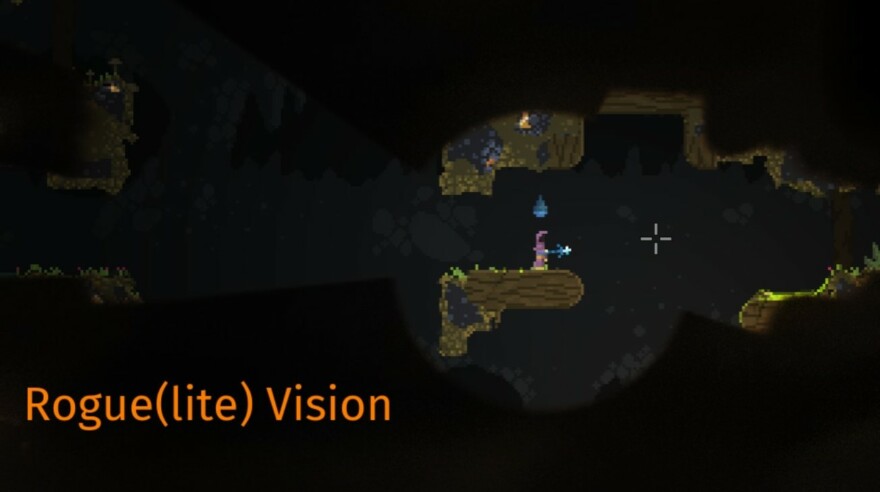 Remember how you could see part of the screen in a game or area that has been discovered by you instead of the entire map? Yes, playing such games can be challenging and if you feel like Noita does not up the ante, then get roguelike vision.

The remaining screen is covered in dark shadow, keeping gamers blind unless they make an effort to go to those areas.

Don’t you just hate it when your player is low on juice, aka dropping health vitals? Wouldn’t it be a lifesaver if enemies you spend time defeating drop health containers for you to restore some of your life? With health containers, you can do just that.

Get the mod and increase your chances of getting health containers upon defeating enemies, each health container pumping back some lost blood and boosting your hp by a bit. Even a bit of HP can go a long way. 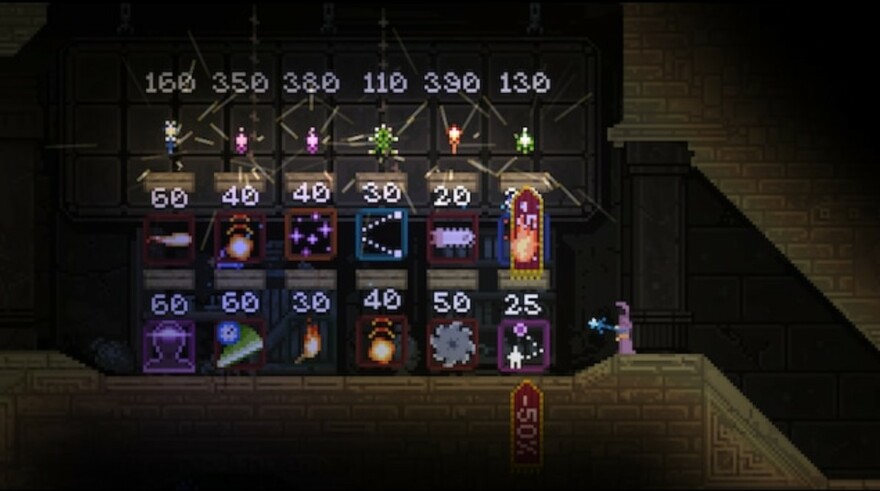 We don’t like limited options, and we hope you’re not a big fan of the options displayed in the in-game shop.

Hence, having more shops mod can bring a plethora of options (not really a plethora but more than what is being shown currently) you can choose from.

Now you can choose between 6 wands and 12 spells in the shops instead of the lower options currently available to gamers.

The wand will not only be upgraded but will also have greater stats than those replaced. You can even add tablets with wands for different combination results.

It’s fun finding out what combination results in what kind of output, somewhat like a Schrodinger’s theory. You never know until you see for yourself. 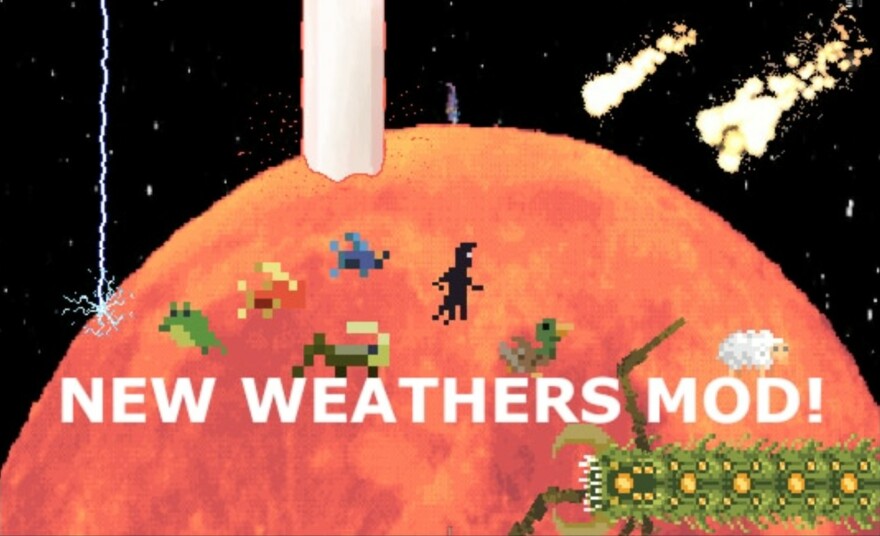 Shake things up a bit…literally. New weathers bring a bit of chaos to the calm offered by Noita. The mod literally enables a lot of natural disasters with some unknown phenomenons.

You can easily have earthquakes, sandstorms, drought, and more with worm rains, frog plagues, and even locust swarms. Up the game’s difficulty level with new weather and experience chaos like never before. 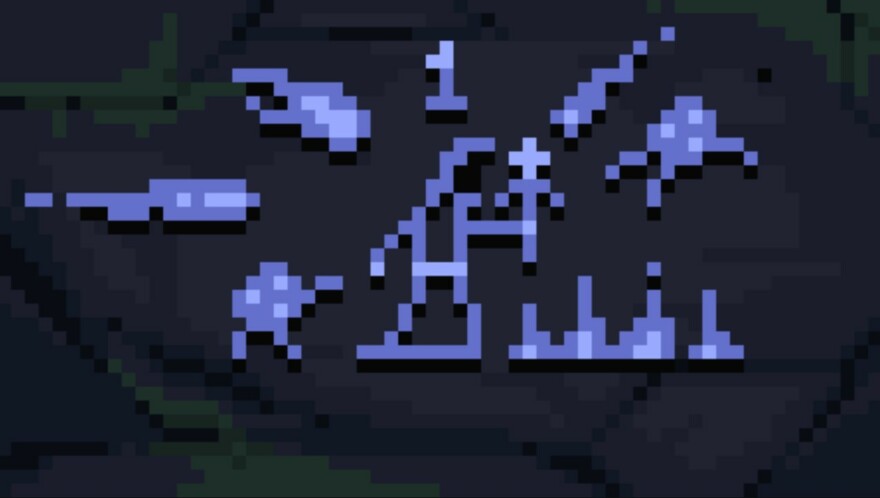 Like many challenging games, gamers complete the game and then take up certain challenges like a speed run, completing the game under a certain time limit to spice things up. No-hit mode is a great mod that takes challenges to a whole ‘notha level.

Your character will immediately die upon being hit once with the mod active. Your main focus should be on avoiding getting hit throughout the game. Good luck with that.

Spellbound is great for those looking to have some magic time. The mod adds new spells to the game and re-introduces old unused spells.

The mod also adds a modifier, these are modified versions of spells that make the game and combat a bit more interesting for example, crumbling shots will break the floor wherever your spell lands.

The mod currently has 39 modifiers, 16 projectiles, and 2 static projectiles. 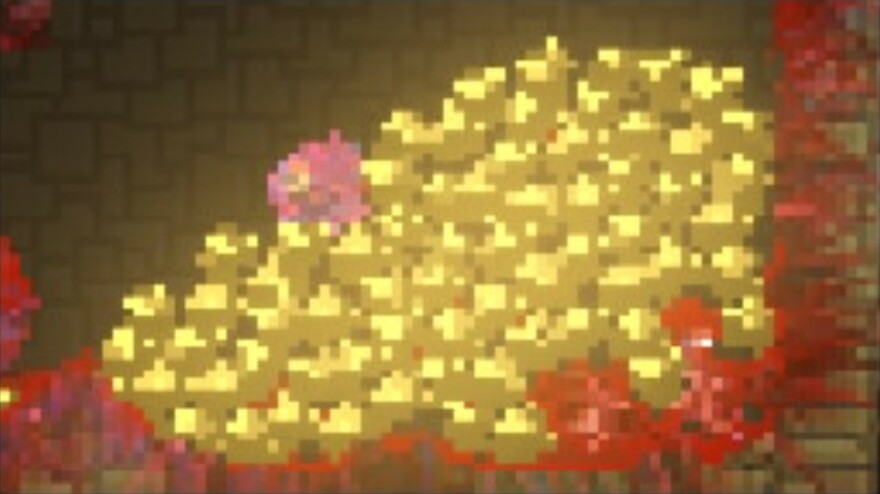 Oh, how we hate it when you kill an enemy to get gold, and the gold despawns before you’re never quick enough to collect it.

All that hard work can be saved with disabled gold. The mod ensures fairness and that you receive gold whenever you kill someone.

The gold dropped will never despawn until you’ve picked them up. So take your time in slaying monsters and return to the gold later as a reward for your hard work.

The Lukki mutation in the game can be a hassle for many as the flight feature can only work if you’re near walls. Unless you’re near a wall, you cannot fly, which makes the feature quite redundant.

Lukki-spiderwalk takes a different turn with lukki and eliminates the flight feature. With a lukki-spiderwalk mod, you can run along walls and ceiling with a quick movement. Be the spiderman you dreamed of being. 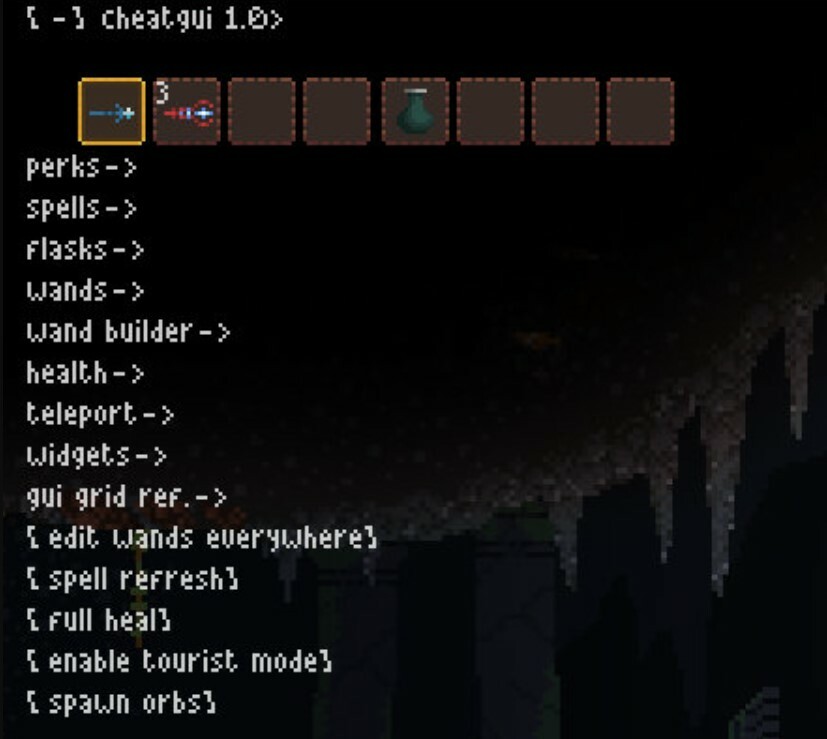 Sometimes playing the game fair can be stressful, and you just don’t get to focus on the enjoyable things, like destroying the floor beneath you or crushing your enemies in a painful way.

Get cheatGUI because a bit of cheating hurt nobody, except the enemies in the game.

CheatGUI gives you access to perks, wands, flasks, and more whenever you want. Simply teleport to a destination, spawn a powerful wand, overpower your enemies, and more with cheatGUI.