Card games and roguelike games are having a prolonged moment in gaming popularity right now; this trend is showing no signs of stopping.

Slay the Spire is a single-player deckbuilder that combines the best of each genre into a unique, stylized adventure where players must choose their cards wisely as they face a multitude of whimsical yet terrifying monsters.

Can you make your way through your adversaries and slay the titular spire? This is one of our favorite games of all time.

Top Mods for Slay the Spire

Please keep reading to find our picks for the 15 best Slay the Spire mods that we think level up the experience, mods that give you the most bang for your download. (Not buck. They’re free, after all.) 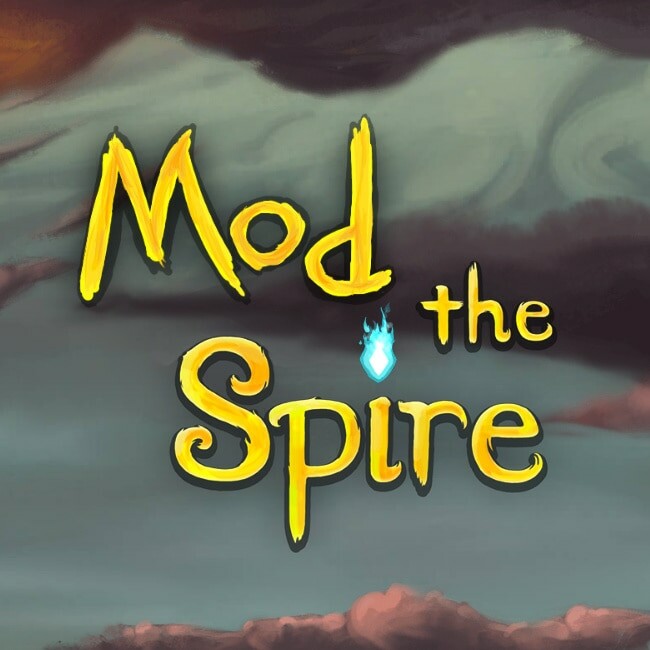 There’s no better place to start than the mod that lets players get started.

ModTheSpire is the mod loader for Slay the Spire. There is no other way to use mods in the game. It’s easy to install and use, thanks to Steam’s community features. This mod is 100% required to use fan-made content or changes to the game. 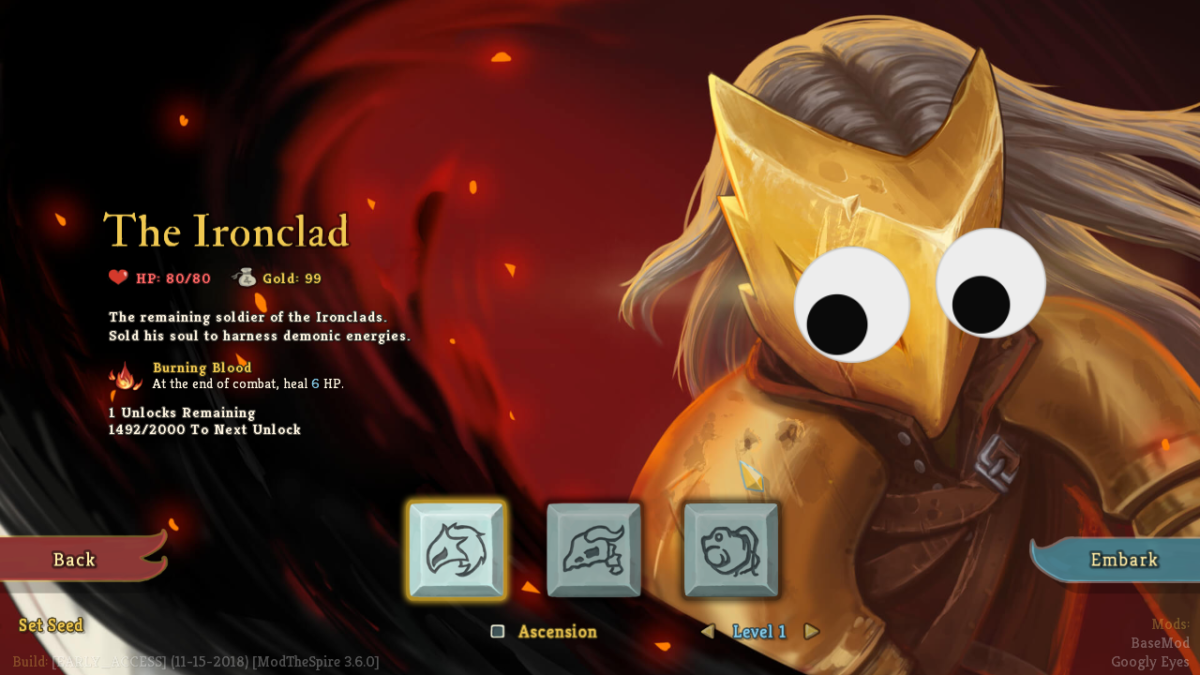 Slay The Spire is a pretty whimsical game. This mod may not greatly enhance your relics, give you powerful cards to add to your deck, or help you along a safe path, but it is silly!

Googly Eyes adds fun, cartoonish googly eyes inspired by the child’s craft material to the foes in Slay the Spire. For some enemy designs, they get less intimidating, but others get downright unsettling with big, silly googly eyes.

While climbing the spire, a little fun never hurt. Fair warning, there are rare occasions where this mod does not play nicely with other custom sprites, though nothing game-breaking. 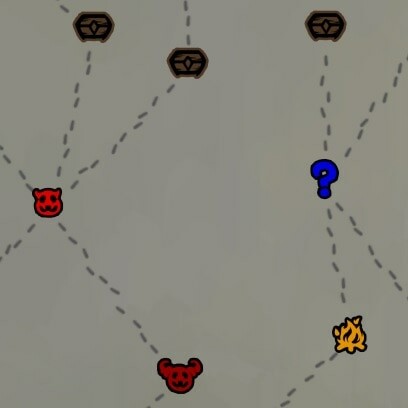 Colored Map adds colorful icons to the in-game map for Slay the Spire.

For us, the game’s map is difficult to read. All of the markings and icons are black. It looks good, but it could be easier to get the information we need. This mod lets players choose which color to assign to which icon.

Now, players only have to consider strategy, not careful map-reading, when assessing risky or safe paths through the game. 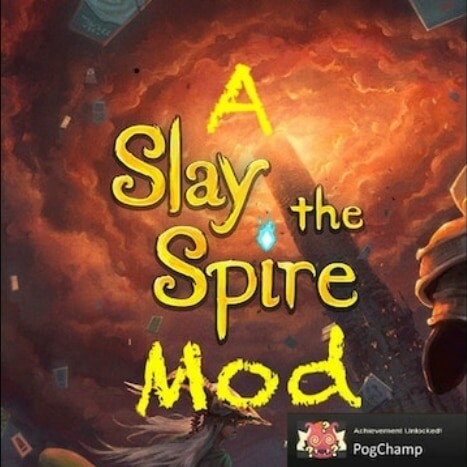 When using mods, most games turn off the ability to gain achievements.

Achievement Enabler lets players earn game achievements while playing Slay the Spire with mods. Since gaining achievements is inconsequential, this is not really cheating. For those of us who only use quality-of-life mods, it’s still nice to know what achievements we rightfully deserve.

For those that use power-enhancing mods, not so much. Who cares, though? 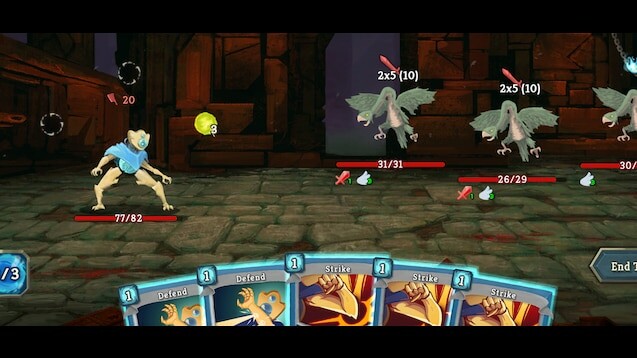 This mod is a pile of changes in one nice package. One click for all of the players’ QoL needs.

Some of the best improvements include intangible creatures appearing transparent, a hide button for the car selection screen, a philosopher’s stone indicator, and reordering the display of relics to better match their uses and dependencies.

There are too many changes to list, but none are unfair or give huge advantages. We consider this mod essential. It would be hard to play without Minty Spire at this point. 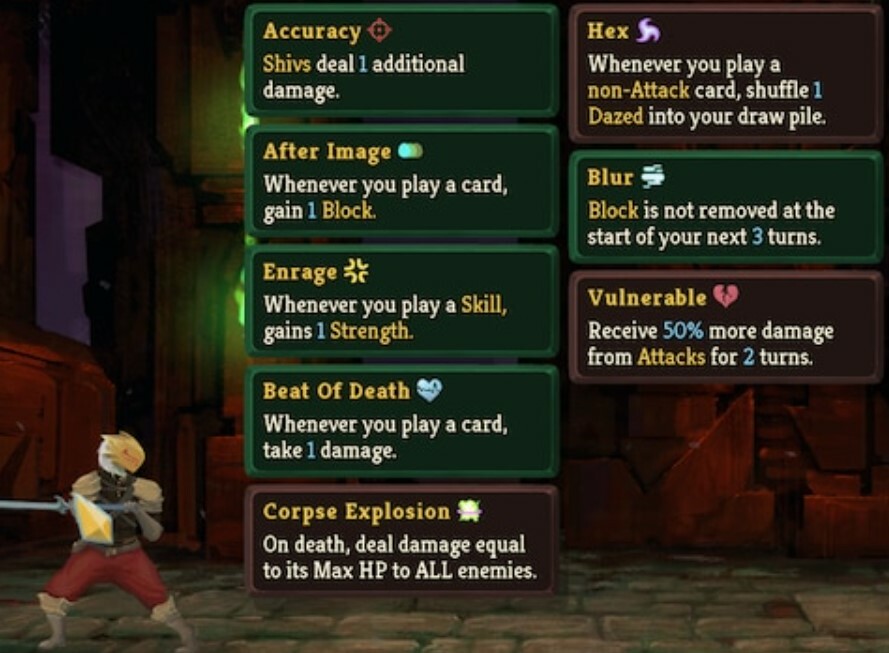 Why does this game hate easy-to-read visual cues?

Colored Powertips adds a colored border around the tips players see while hovering over the player or an enemy. Buffs get a new green outline; Debuffs receive an appropriate red frame. There are additional options and colors available in the mod’s configurations.

Like the color map icons, this mod doesn’t reveal anything unfair; it makes it easier to access information that is already on-screen. Accessibility and ease are always good things to add to a game. 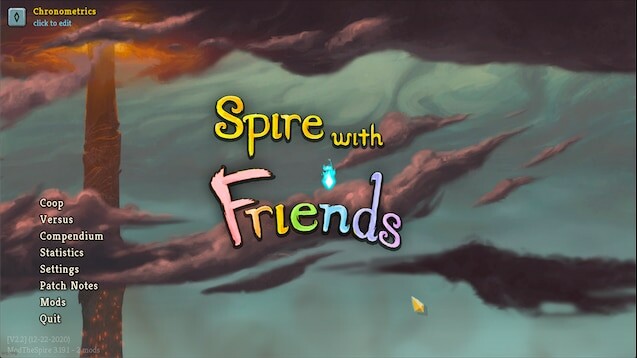 This mod includes a cooperative mode and a versus mode. Players can gather in groups of up to six. There’s a matchmaking and lobby system to make finding others and creating groups as easy as possible. Quality multiplayer roguelike experiences are rare, and turn-based team play is even rarer.

The speedrun versus mode supports up to 200 players, which is wild. Spire with Friends is a stellar mod that any player with even a single friend should find mandatory. 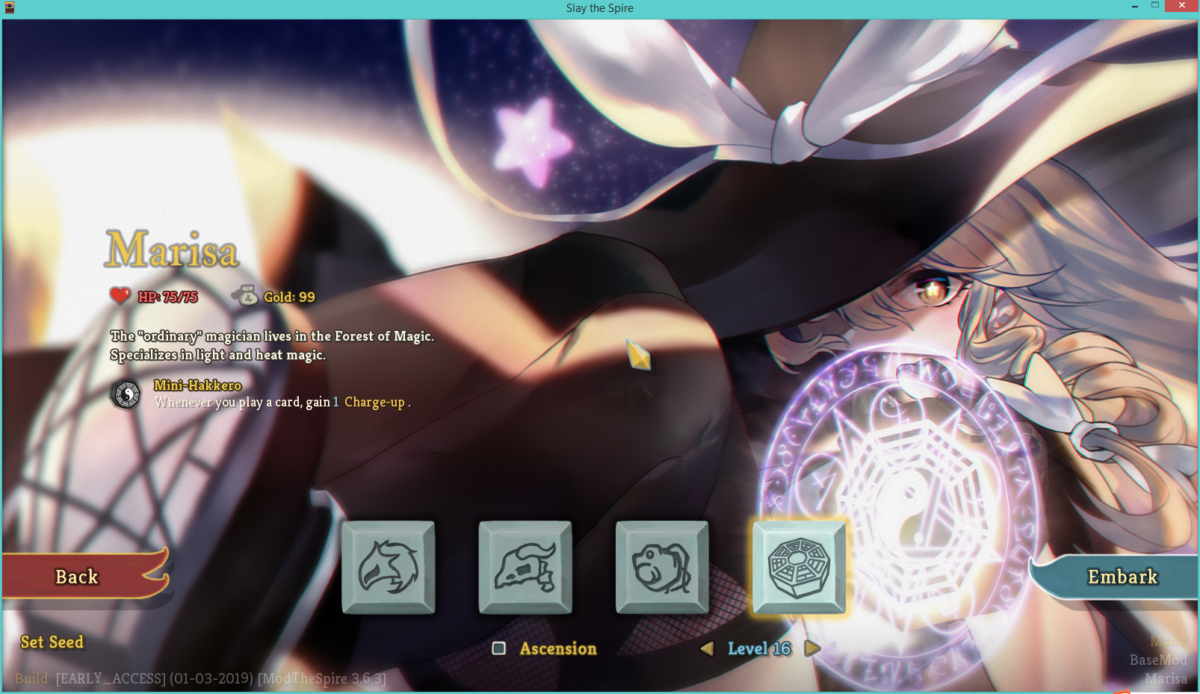 This mod adds Marisa Kirisame from Touhou as a player-made playable character to Slay the Spire.

One of the best ways to add more value to Slay the Spire is custom-made classes and playable characters. Marisa is for those Touhou fans out there. She boasts her own set of cards, 11 relics, and one potion.

Her sprite and art assets look natural; they look like they can with the game. We enjoyed playing as her, even if she’s a bit over the top; that’s Touhou! 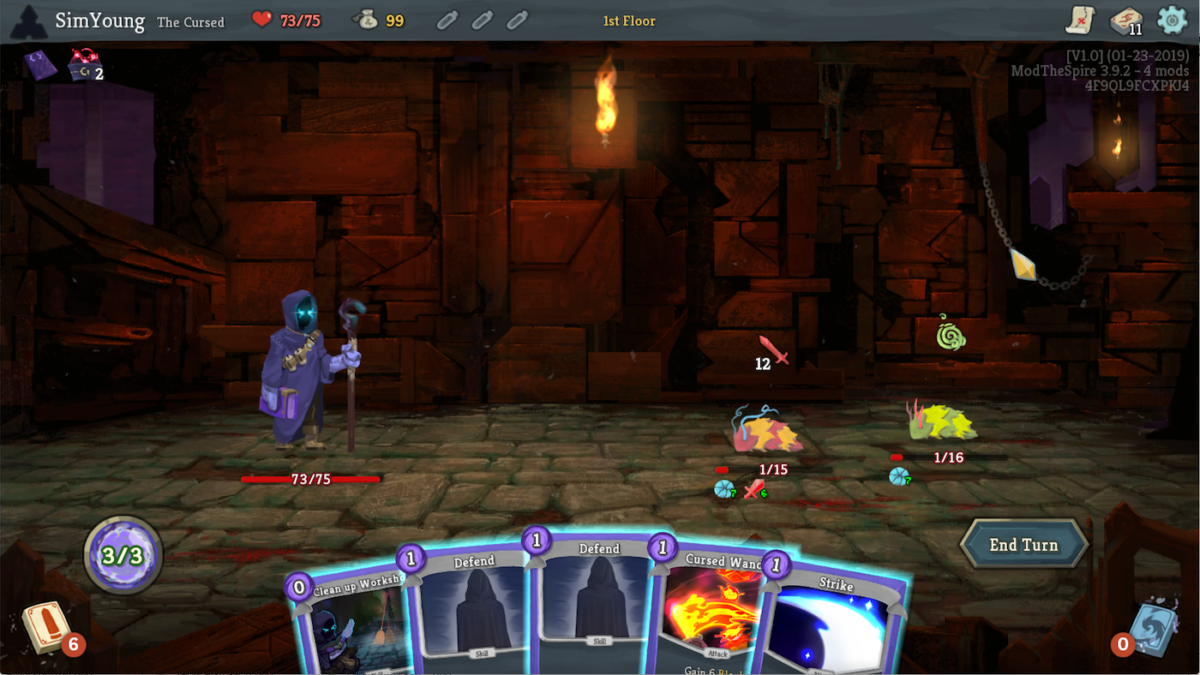 The Cursed is a custom new character for Slay the Spire that is themed around corruption and darkness.

Another well-crafted new playable character, The Cursed, brings new mechanics with them to the game. “Cursed” cards offer significant benefits with tricky downsides; ritual cards carry novel effects and more. Discover the other powers of The Cursed by downloading this mod.

We suggest this mod for players with a little bit of experience in Slay the Spire or other high-strategy card games.

There is success to be had with a cursed deck through its powerful, complex interactions, but it takes some forethought to select the right cards that work in your favor. 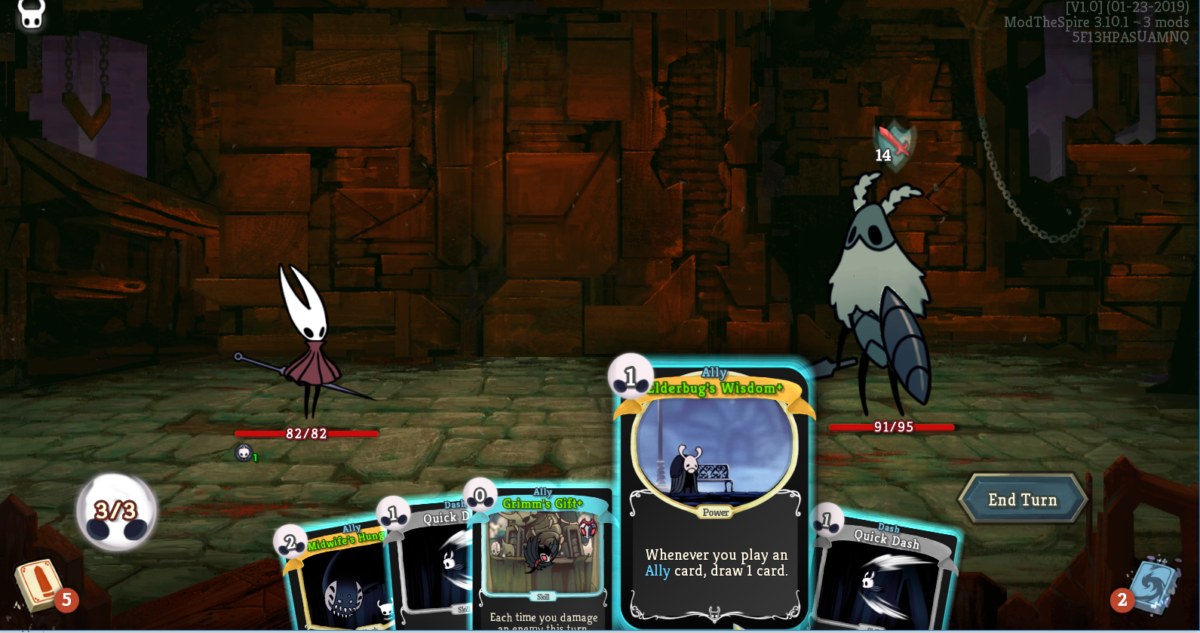 This mod adds a playable character, art, story, and sounds. Fight familiar foes as the familiar hero, the Hollow Knight themselves. The custom class fits in well among the base game’s classes. 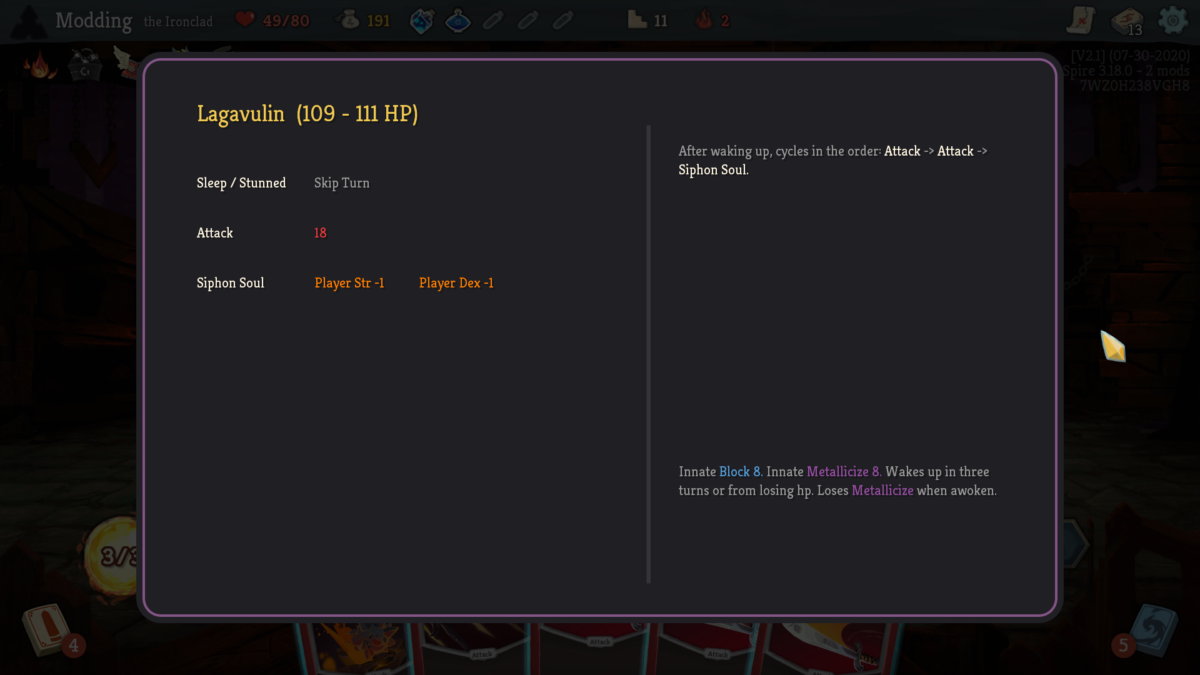 This mod flirts with the idea of an unfair advantage, but it makes the game a lot of fun; strategizing and skill are still 100% necessary even with this mod installed. As the creator notes, all the info can be found in-game or learned from your own experience.

If you’re a player that keeps notes on enemy behavior, this can save you some time. Well seasoned players will still dispatch foes faster without this mod than OK players will with it. 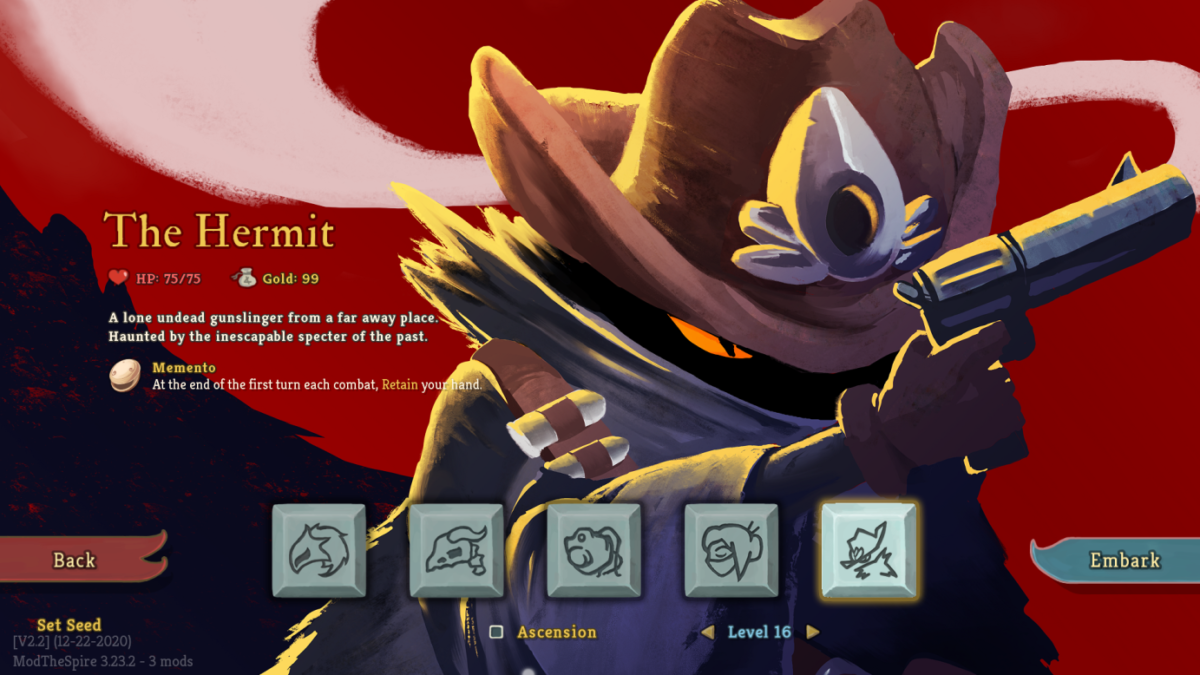 “A lone undead gunslinger from a faraway place.”

The Hermit is a stunning, well-made custom class for Slay the Spire. It is designed to feel like it was there all along. The Hermit fits in seamlessly with the base game.

We LOVE this class. It’s a must-have for anyone who enjoys Slay the Spire. It feels balanced, familiar, fun, and fresh all at once. 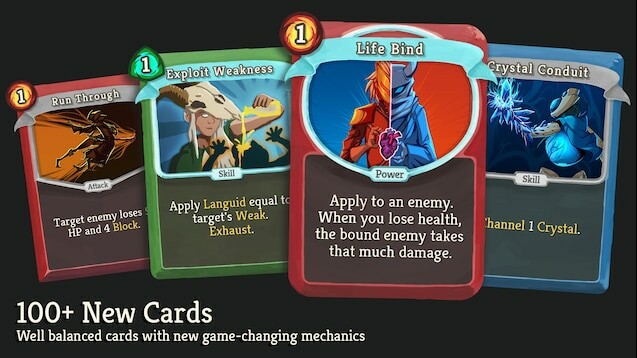 This mod adds even more replayability to the game, even though it already has loads.

Replay the Spire is an expansion for Slay the Spire that adds new content to the game. The collection contains over 60 new relics, 70+ new cards, new events, potions, rooms, bosses, elites, and run modifiers. It is a bona fide player-made expansion pack; we can’t believe it’s a simple, free download from the Steam Community! 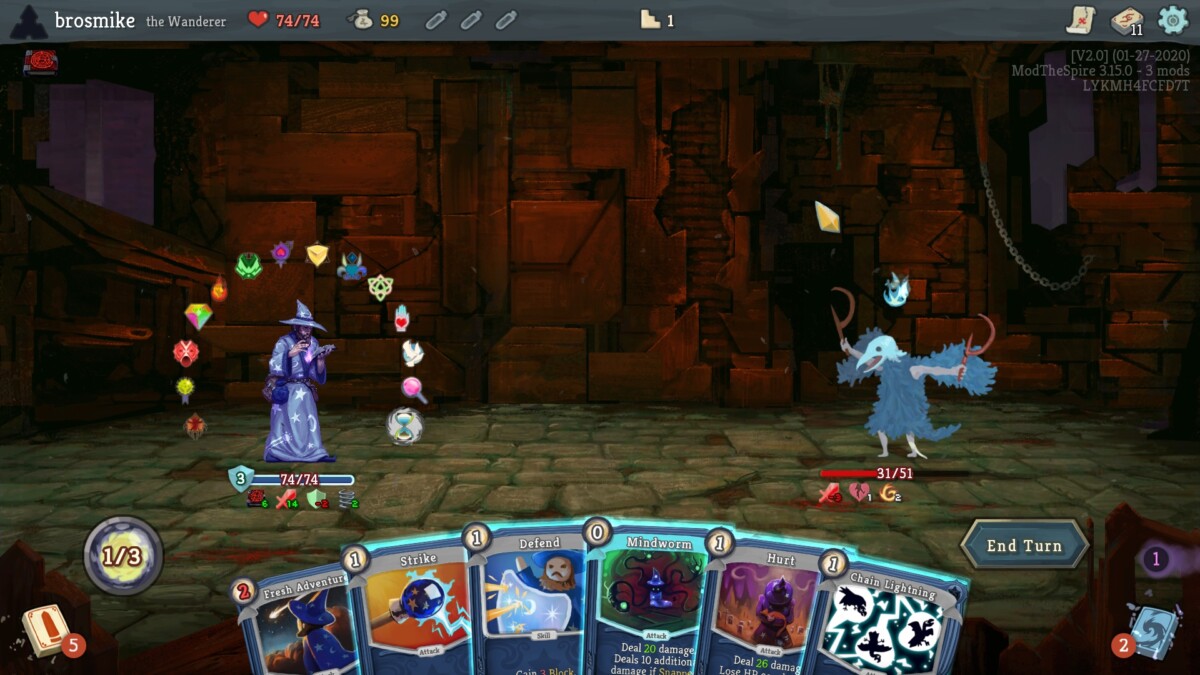 Jorb’s Wanderer Trilogy is a story and content expansion centered around The Wanderer in Slay the Spire.

Three new characters, a ton of fresh, custom lore, 70+ new cards, and NEW VOICEOVERS await players in this ambitious addition to the game. There are several new mechanics that offer fresh ways to strategize and fight.

These new mechanics work together with new cards and old ones to yield unique decks that can face different enemies in a novel manner. 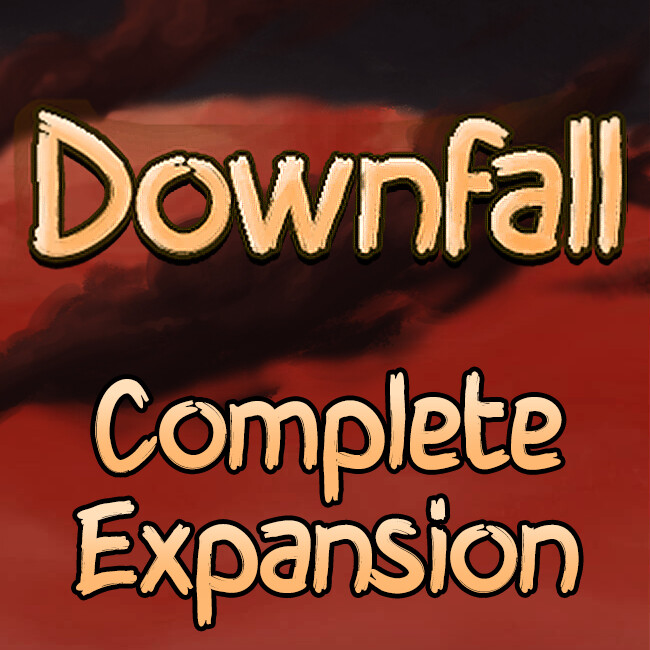 Topping the list, we have a massively popular expansion mod that could have been paid DLC.

Downfall is a full-featured expansion for Slay the Spire. While other mods offer bits of what Downfall does, none of them is the total package.

This expansion boasts a NEW CAMPAIGN, seven new playable characters, relics, cards, potions, and so much more. It is more like a brand-new game with the same engine as Slay the Spire. We cannot believe this was a labor of love from fans.

Our favorite new feature is the ability to take up the title of Villain and defend the spire, a total reversal of the game.