Like most open-world games made by indie studios, Starsector is a very easy game for its users to mod.

The vanilla game provides plenty to do, of course, like any multi-genre game with an open world should, but with the game’s bustling community, there’s also a ton of ways to add some extra flavor to the game.

Below, we’ve listed ten of our favorite user-created mods for Starsector. 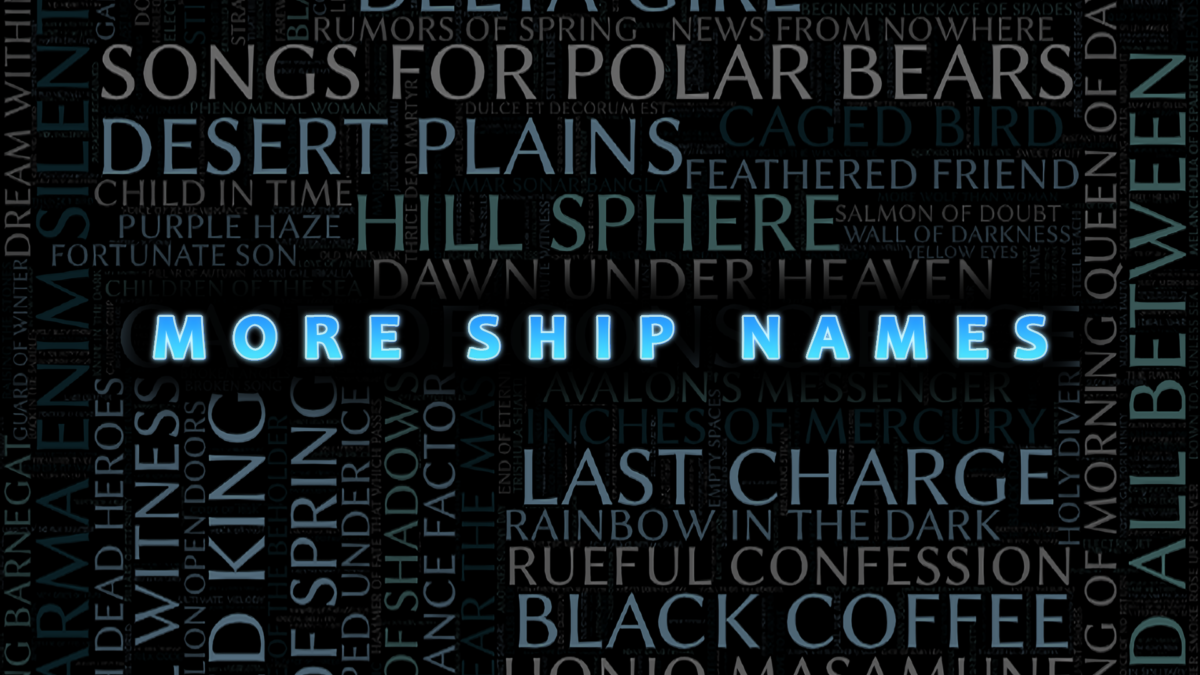 More Ship Names is a mod for the game Starsector that adds over 7,500 new ship names to the game.

These new ship names have been carefully selected to fit with the game’s themes and aesthetic and add a great deal of flavor and personality to the vessels in your fleet.

Whether you’re looking for a badass name for your warship or just want to give your freighter a more charming moniker, More Ship Names has you covered.

With so many new names to choose from, you’re sure to keep getting surprised for hours and hours.

So whether you’re a seasoned veteran of Starsector or are just getting started, be sure to check out More Ship Names. 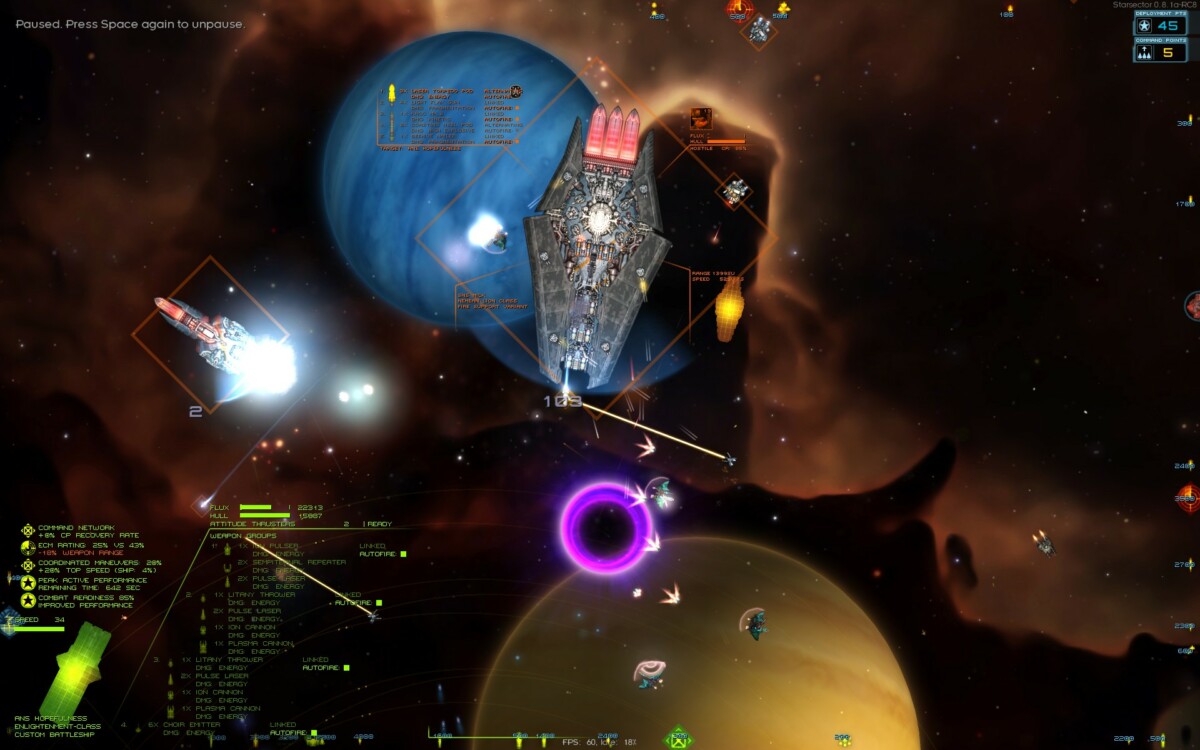 Scy Nation is a content mod for Starsector that introduces a new faction to the game: the Scyans.

The Scyans are survival-driven people who have been forced to compromise their principles in order to survive in the Sector. They are speedy fighters but fragile when caught, and they will stop at nothing to achieve their goals.

The Scyans offer a completely new experience for players who are looking for more challenges.

The Scyans are an extremely powerful faction in the right hands. 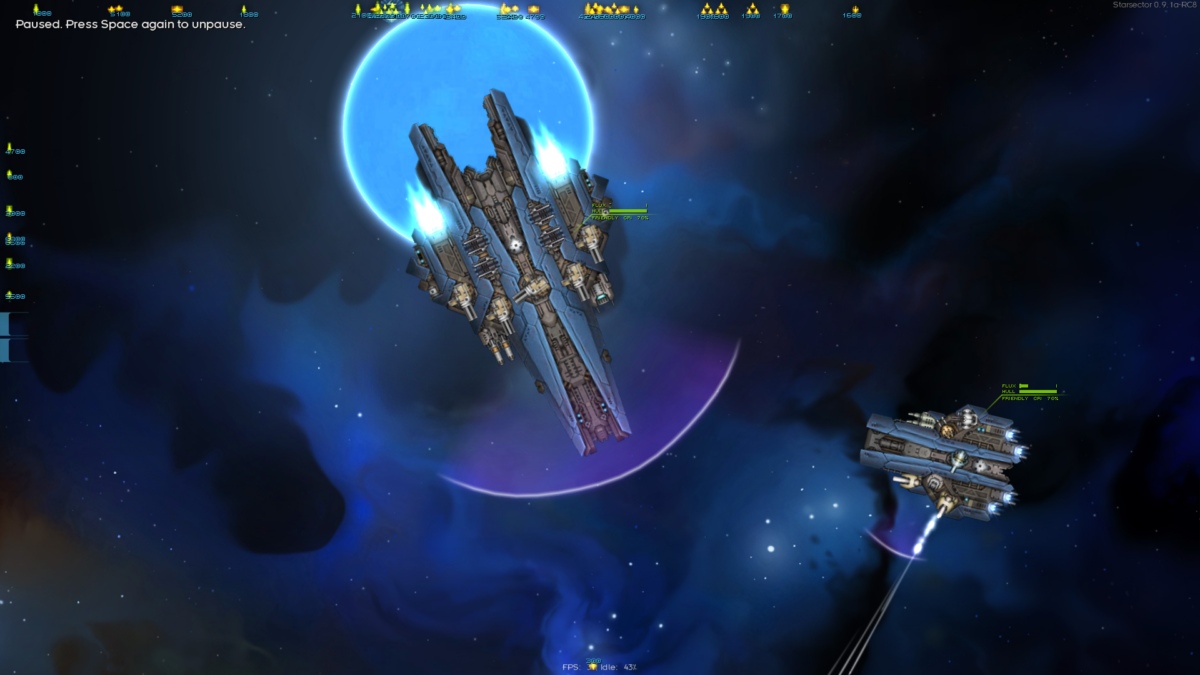 The Legacy of Arkgneisis mod for Starsector introduces the Anarakis Reparations Society, an informal collective of shifty mercs flying weak ships built to avoid fair fights and exploit unfair ones.

Privateers that operate outside the bounds of the law.

Their ships are often adorned with bright colors and eye-catching designs, which serve as a warning to their enemies that they are not to be trifled with.

This fascinating faction adds a great deal of depth to the game. Their ships are unique and fun to fly, and their backstory is intriguing.

If you’re looking for a new challenge in Starsector, we highly recommend giving this mod a try. 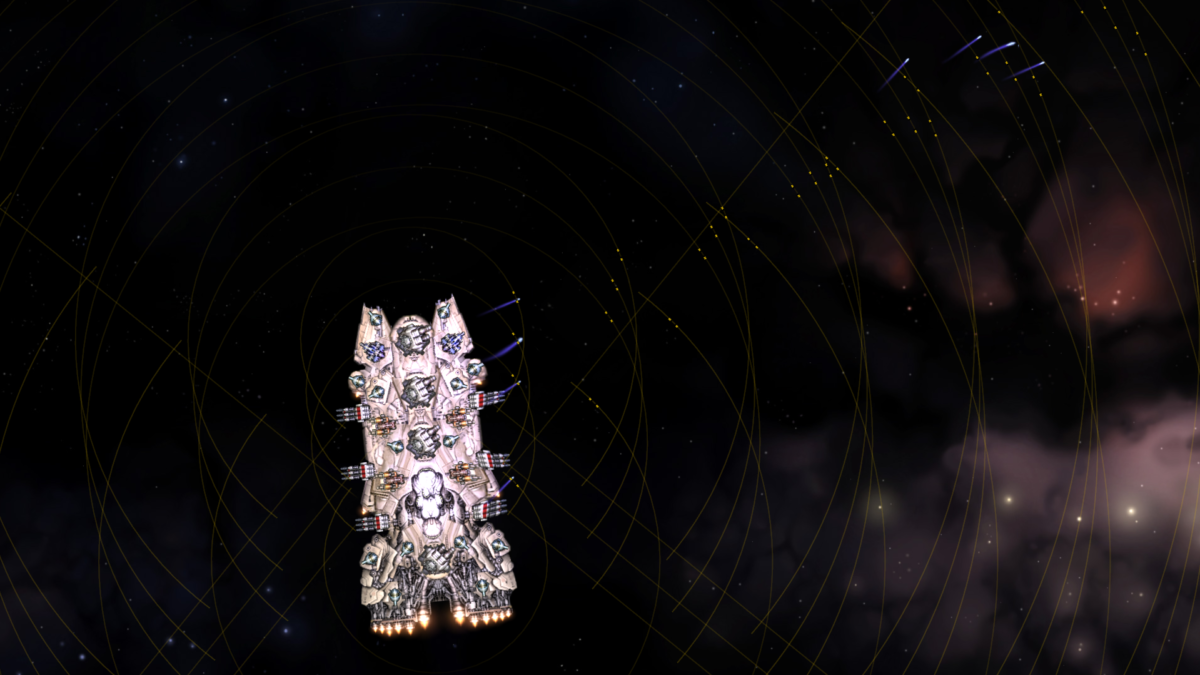 When a modder gets a spark of inspiration to improve their favorite game, nothing can stop them.

Missing Ships adds a bunch of new ships to Starsector.

The ships are spread out around the base game’s factions and are balanced to blend seamlessly on normal difficulty.

The new ships are a great addition to the game and add a lot of variety to the fleets.

The modder did a great job of balancing the new ships against vanilla ships and making them fit well into the game. 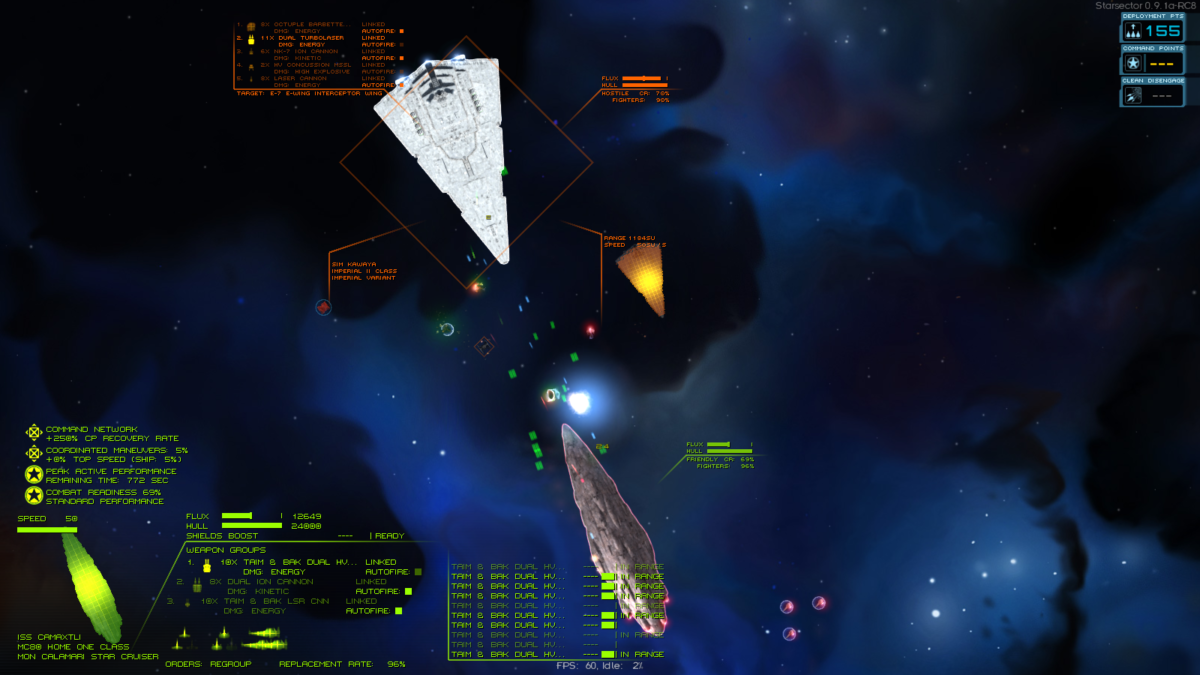 Star Wars 2020 is a mod for the game that introduces a variety of new factions into the game, including the Galactic Empire, New Republic, and more.

Each faction has its own ships, weapons, and other equipment to help you wage war across the galaxy.

The mod also includes new maps and scenarios to help keep the action fresh. Fans of Star Wars and strategy game fans will agree Star Wars 2020 is sure to offer something superb. 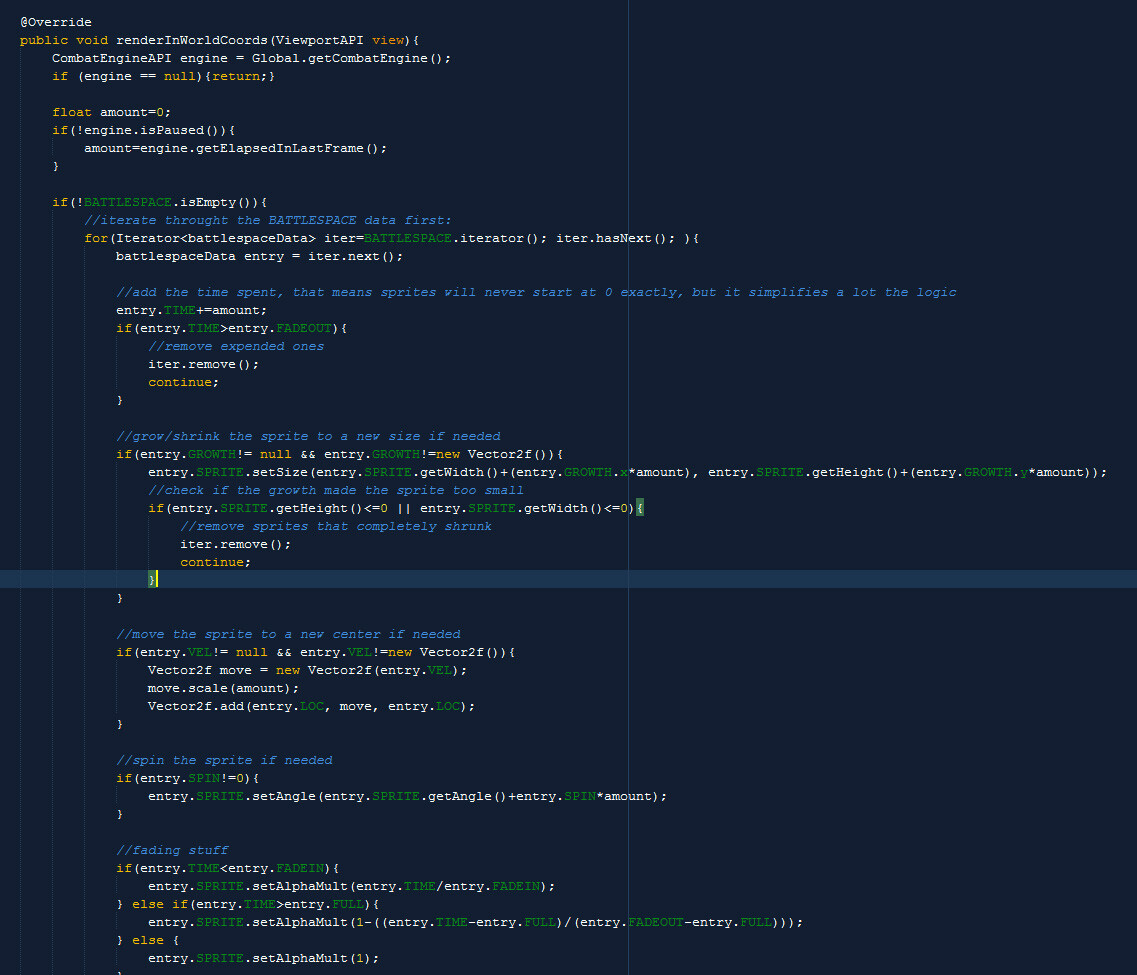 MagicLib is a mod that provides an open-source library that is full of plugins and scripts written by the Starsector community.

You can also enjoy a customizable missile AI script, a projectile script, and a vectoring script. This mod will also alter user interface elements throughout the game. 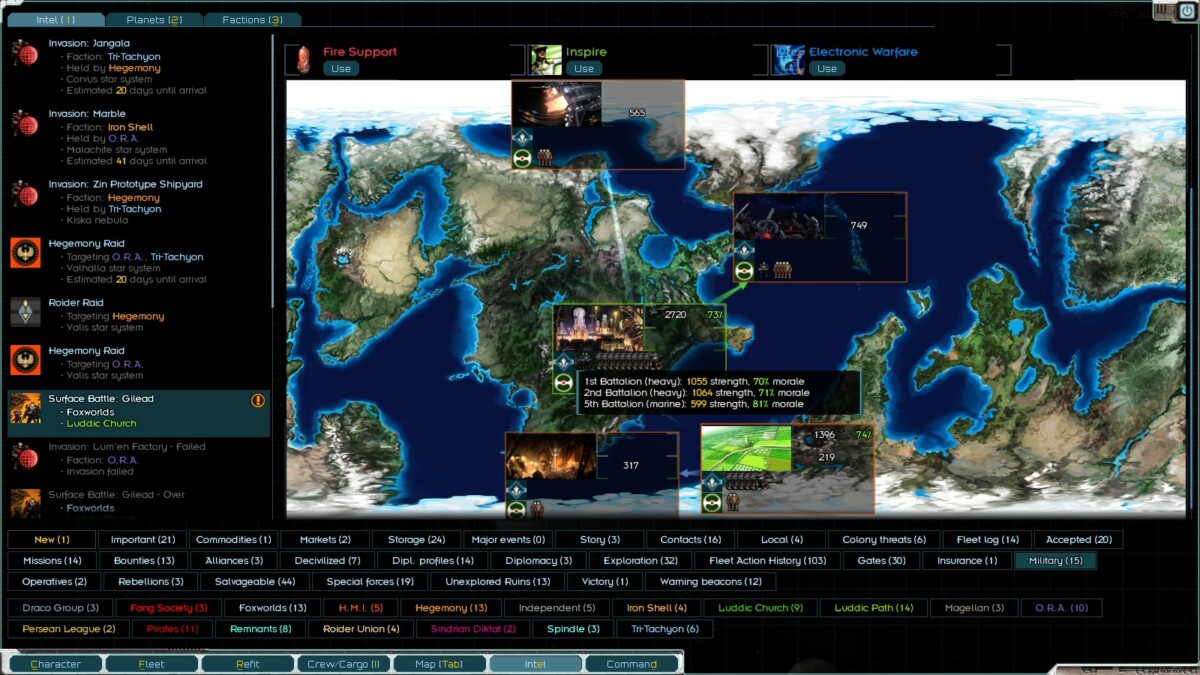 Ready for a complete overhaul in Starsector? The Nexerelin mod provides an extensive number of changes to gameplay, including faction diplomacy, warfare, and other enhancements.

With the Nexerelin mod, factions can wage war with each other, alliances can be formed, and there are more tasks to do and more events to see.

Mine planets, pay tributes, and witness remnant raids and fleet events, too! You can also start out in a randomly generated sector and with a nice range of factions and ships. 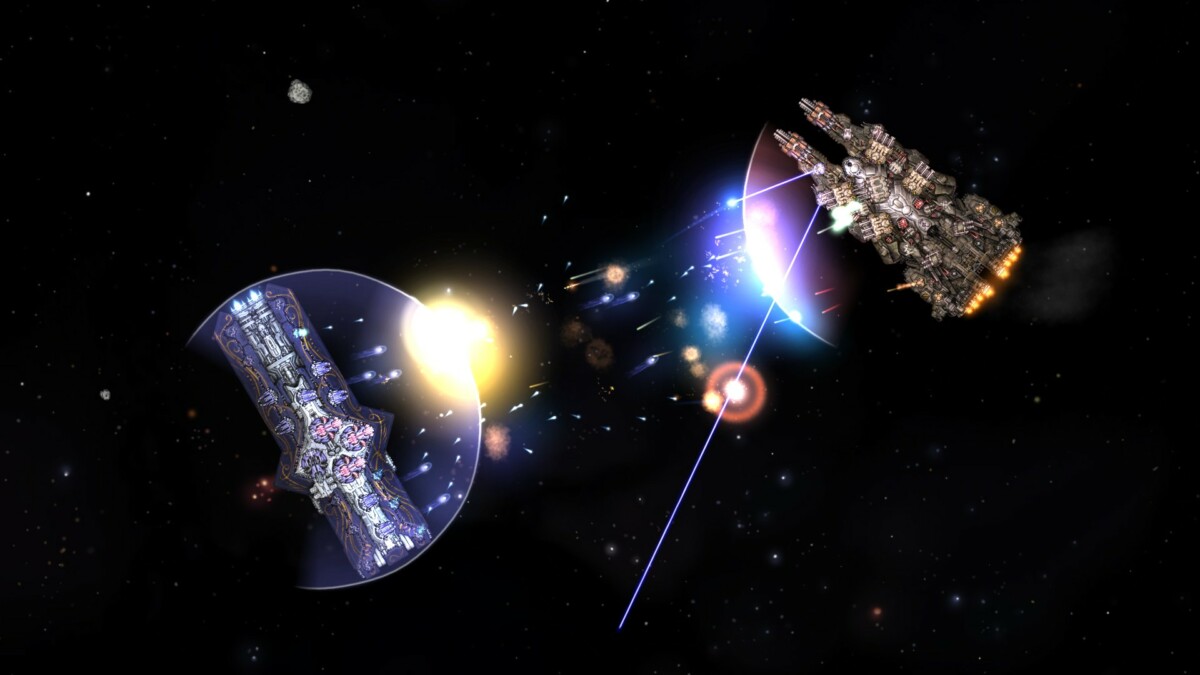 Looking for a new faction to add to your Starsector game file?

The Outer Rim Alliance is a high-tech faction that strictly uses broadside ships. If you enjoy using energy weapons, this is the faction for you.

The ships may be slow, but they are dependable and offer a strong industrial base.

These ships are also good for tank-heavy warfare, as they can easily take out enemies with their long-range artillery. 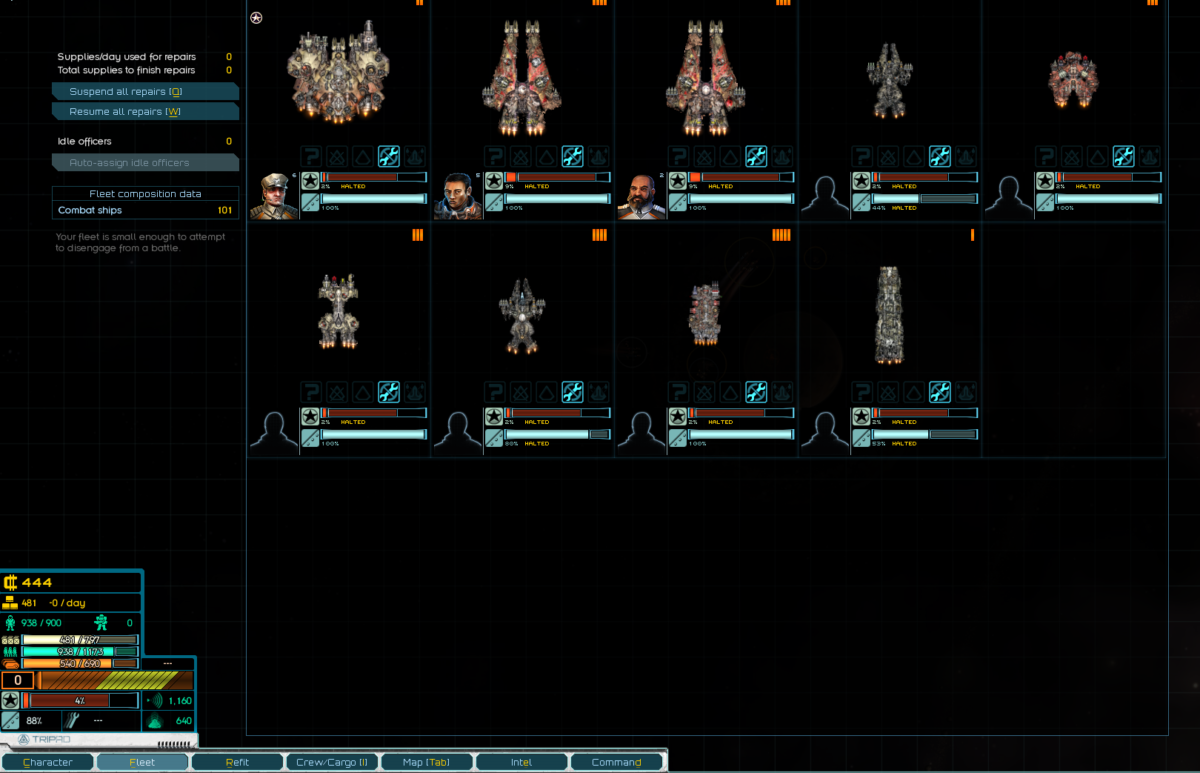 This is a straightforward mod to have in your game file. The No Maintenance Costs mod is as it says and simply deletes the cost of maintaining your gear in-game.

However, this does not apply to ship maintenance costs! This mod helps to cut down how much you need for maintenance overall, which can speed up the process of what can be fixed and when. 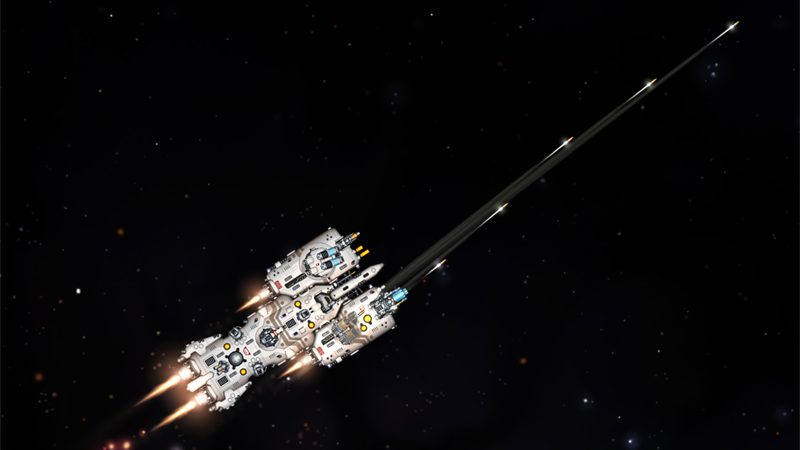 If the Nexerelin mod wasn’t enough, how about a mod that adds a wide array of weapons and ships to Starsector?

The Dassault Mikoyan Engineering mod adds over 40 ships and over 70 weapons to the game. The mod also adds in a midline faction that is high-tech and cruiser centric.

But that’s not all! This mod will add in quality and slightly comedic content to spice up the game a little, including funny ship names, space magic, and extensive campaign content. 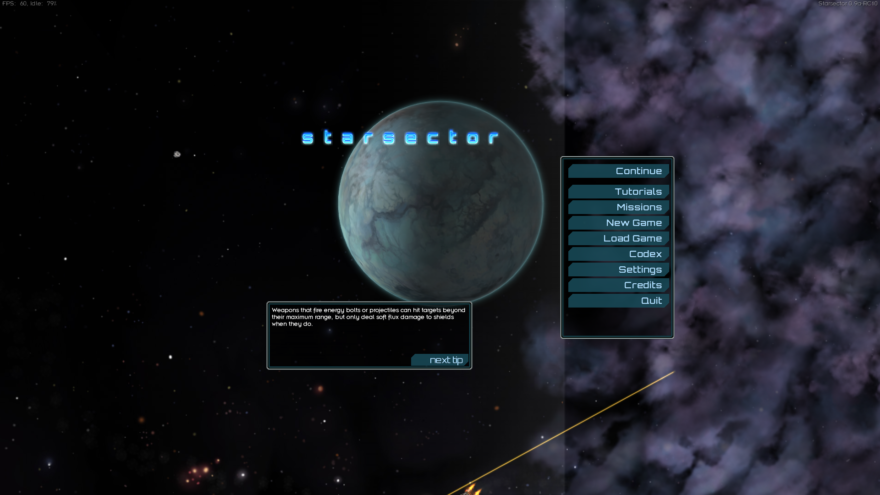 Any widely-modded game has at least one mod like LazyLib. It’s the foundation mod – the one that’s required for many other mods.

And if you have a mind for creating your own mods, this is generally agreed to be the easiest mod to do it through. You’ll want to install this one first before starting on anything else. 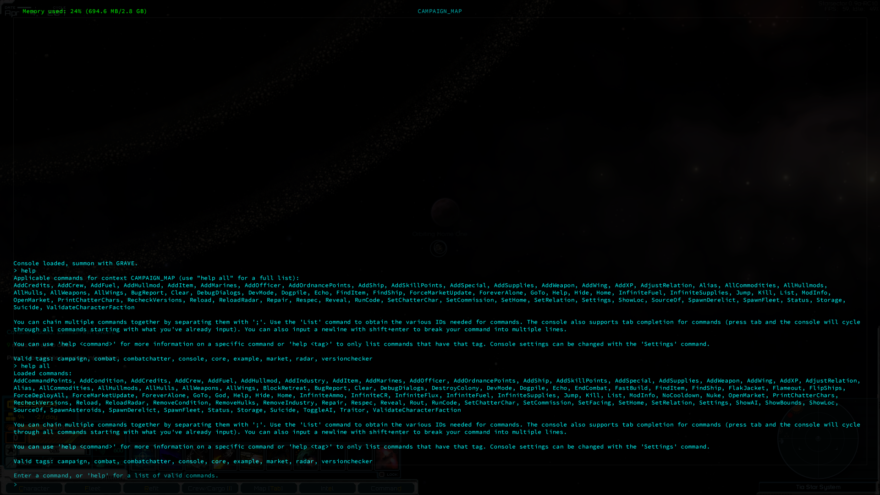 Another useful one for users who have a mind to make their own mods, the Console Command mod, obviously, adds a developer’s console to Starsector.

It can be brought up through a simple Ctrl+backspace command. Moreover, to help you get started on tweaking the game, the download also includes instructions for adding custom commands. 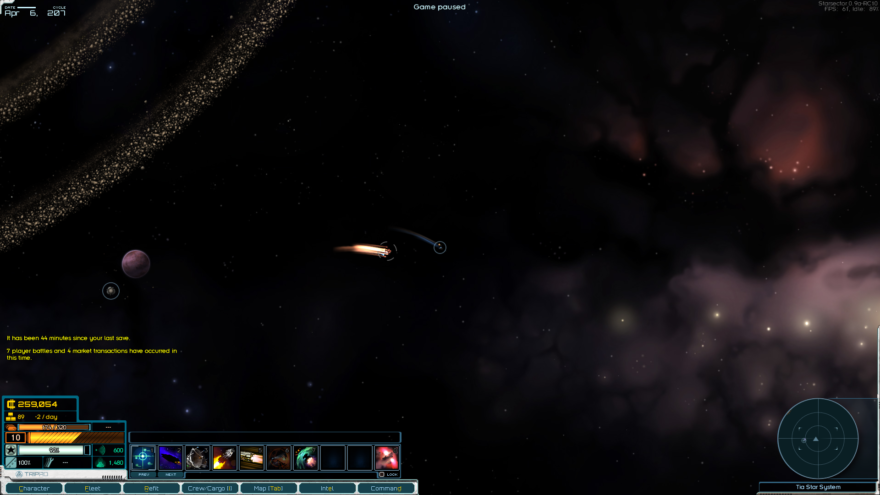 If anything about Starsector can be called controversial, it’s the fact that, as of yet, it doesn’t have an autosave feature.

It’s not something you might notice at first, but it can prove tremendously annoying if you realize, after a battle that hasn’t gone your way, that you haven’t saved in a while.

The Autosave mod, as the name implies, applies an autosave feature to the game.

However, if you’d prefer to keep doing the saving yourself, you can also choose to simply let to mod notify you when you haven’t saved in a while. 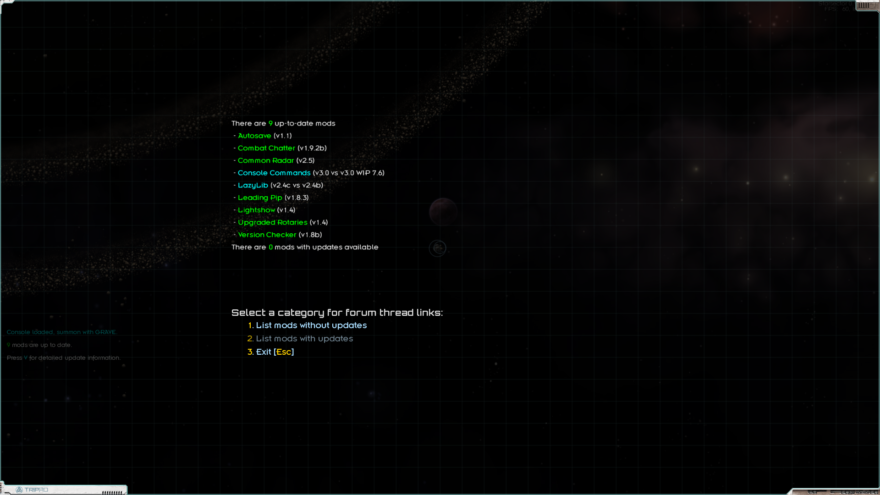 It’s increasingly common, nowadays, for games to be widely available while still in development. Such is the case with Starsector, which is still in the alpha stage.

What this means, of course, is that frequent updates are being released. On top of this, the mods themselves also receive frequent updates, often to adapt to the game’s ongoing evolution.

It can be a bit much to manage all these updates, especially given how the game isn’t yet available through Steam, or some other platform that auto-manages updates.

This is what makes the Version Checker mod so useful. In brief, it notifies you whenever your game, or any mods that you’re using, have updates available.

You simply need to press the V button on the campaign menu to bring up a list of currently available updates. 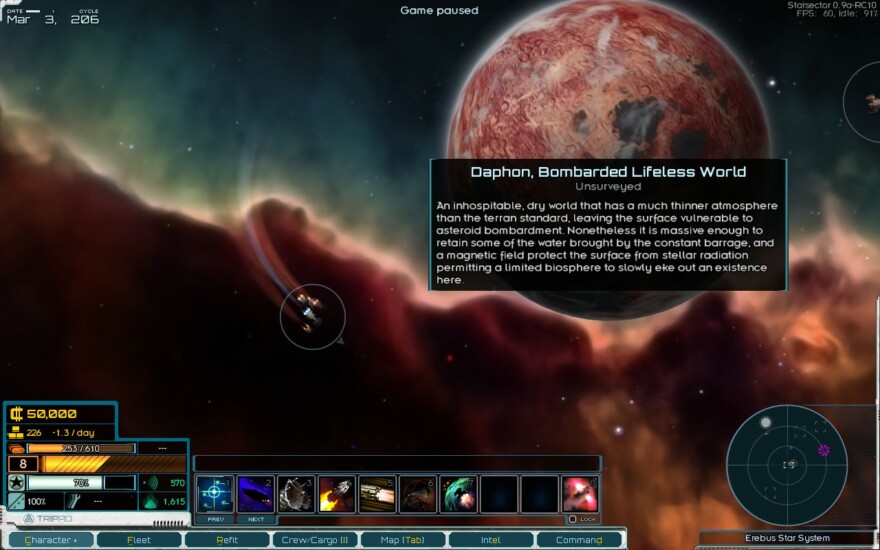 One of the main draws of procedurally generated games like Starsector is their immense replayability since no two maps are exactly the same.

However, once you’ve played a procedurally generated game enough times, it does start to feel a little familiar. After all, every map, though random in design, draws from the same resources.

That’s why mods like Unknown Skies are so useful. In brief, this mod adds 30 new planet types and a number of new backgrounds, all of which add some fresh variety to the maps.

It’s a great option for giving the game some extra replayability once you’ve played through the vanilla game enough times for it to start feeling familiar. 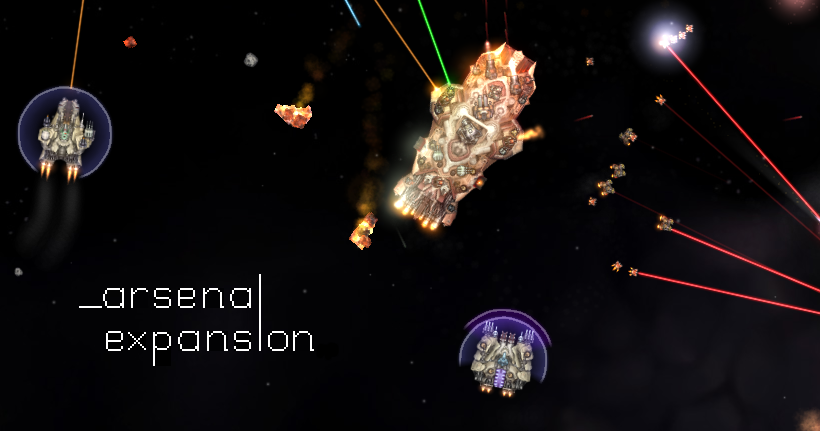 Being a space sim, the vanilla Starsector boasts plenty of ships and weaponry for players to choose from.

However, in a similar vein to Unknown Skies, the Arsenal Expansion mod is great for when the game’s (admittedly expansive) vanilla content has started to feel a bit too familiar.

In short, this mod introduces a variety of new ships and weapons designed to fit in with the aesthetics and themes of the vanilla game.

It’s a great bit of extra content to keep the game fresh while you wait for official additions to the game. 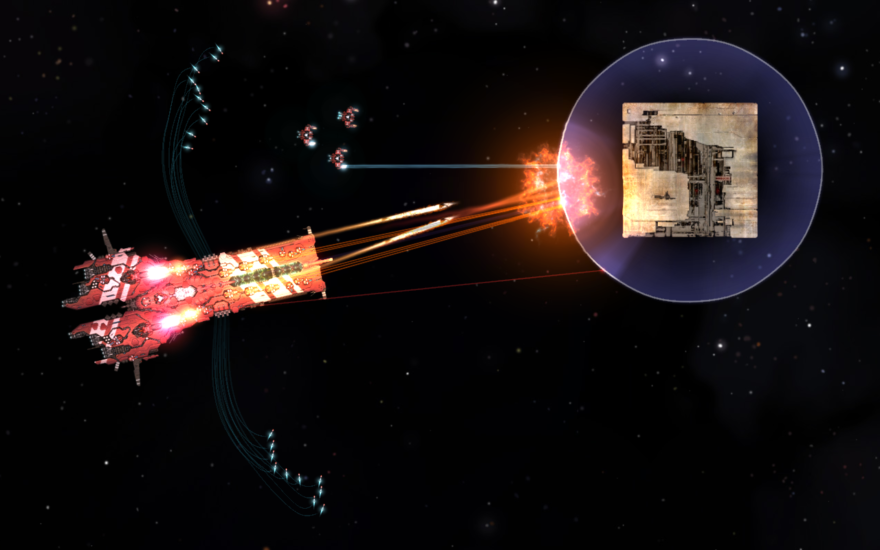 As you’re likely aware, there’s a ton of different factions to choose from in Starsector, each with its own backstory and features.

This new faction, as their name implies, is a ruthlessly greedy corporate body that uses mid-tech ships.

And let’s be honest, no game concerned with humanity’s politics in the spacefaring age is quite complete without at least one greedy corporation.

Combat Chatter is a mod that makes your ships put out relevant chatter during combat situations, relating to their current status and so forth.

This is a fairly common thing in RPGs and strategy games, but at the moment, it isn’t present in vanilla Starsector. Besides being strategically useful, it’s also great for increasing immersion. 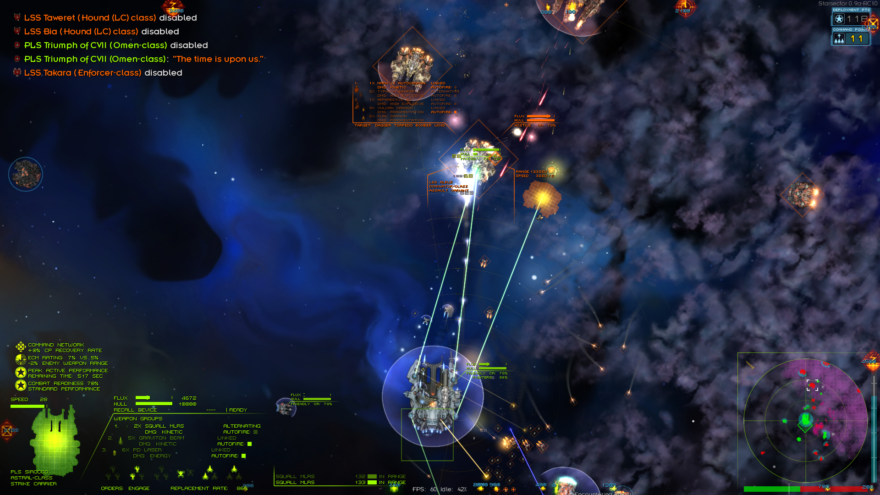 Combat in space is, to put it mildly, a complicated process. The Common Radar mod opts to make it a little bit simpler by adding radar to your combat interface.

It’s a relatively simple radar, performing basic functions like indicating the position of various objects such as ships, missiles, and asteroids.

It also pinpoints objectives and outlines the map border. It’s a very inconspicuous addition to a game, but it can make a major difference in an especially heated battle. 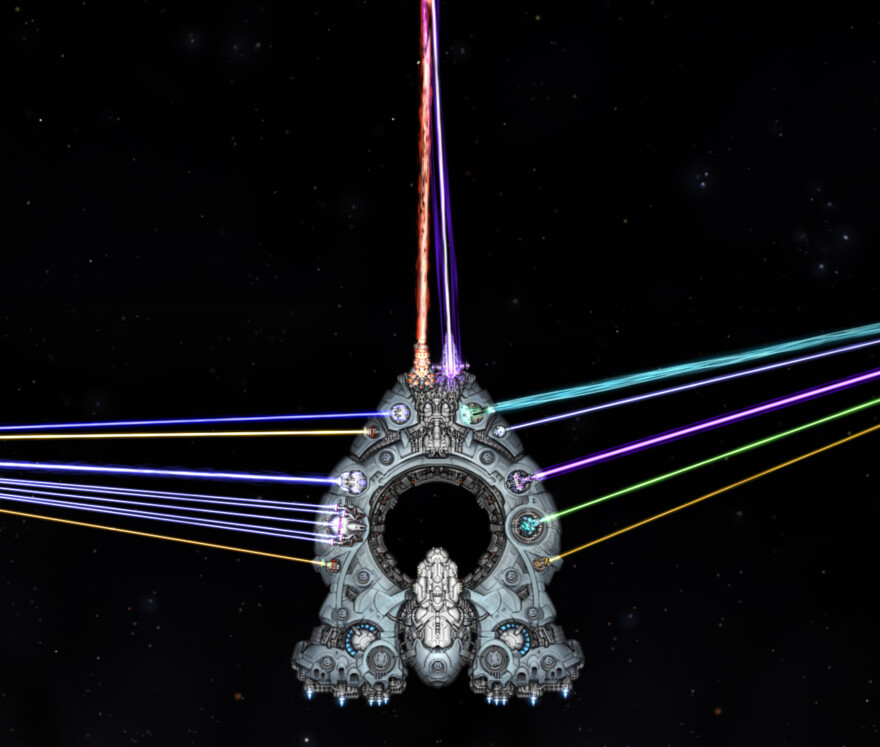 Weaponry is a major feature of Starsector, but while it’s all very diverse in function, it (at least in the game’s current state) all looks visually very similar.

The Lightshow mod fixes this by giving the weaponry beams different colors.

Besides giving each battle a bit more visual flair, this mod also has the advantage of being a good visual shorthand.

The color of each beam is used to indicate its particular damage type. It’s all very logical and easy to remember, too – high explosive beams are red, energy beams are blue, EMP beams are turquoise, and so forth.

It’s a simple change that can be very handy in an intense fight.