Cities: Skylines is one of the greatest city builder games to be released. Although the game lacks an exciting scenario or interesting events, it has some of the greatest mechanics, and large-scale extreme detailing makes the game fun to play.

Put your head to the test by designing an advanced all-purpose city or simply make money through an industrial revolution.

Whichever path you choose, you will be faced with citizen needs and city requirements, which can create a challenging element.

Here are a couple of mods that we think are the best Cities: Skylines mods to help you get through the tough times with a bit of fun. 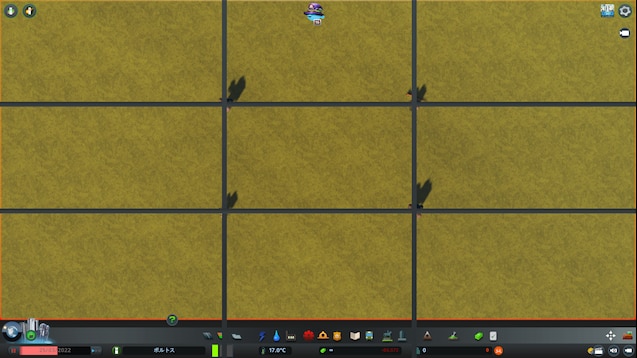 This mod is a newer one, having been released last year, and is great for those who love to take screenshots of their creations.

When taking great pictures, having a grid to follow the Rule of Thirds makes taking photos even easier, and that’s what this mod does.

This mod can be used in two-part and three-part compositions, and it currently follows a 16:9 aspect ratio. Be aware, though, that if you have a mod meant to hide UI, this mod will not work.

Also, the creator of Camera Grid makes a point to mention that this mod is still in alpha, so there might still be bugs, but overall, this mod makes it easier to take stunning photos of your latest city creations. 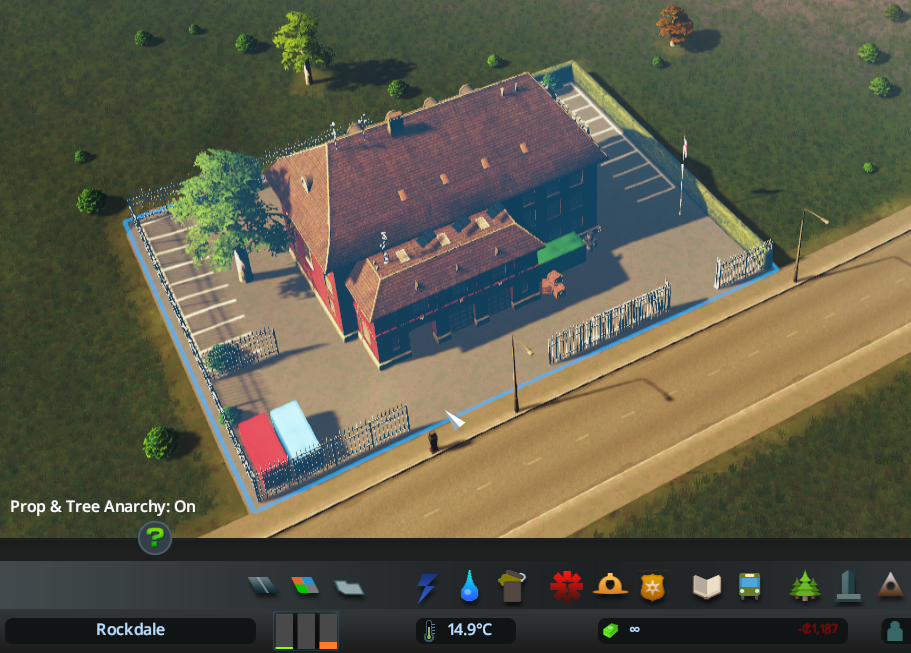 This mod is great for those who hate being limited and restricted as to what they can do with their props and trees in City Skylines.

Prop & Tree Anarchy allows players to place props and trees almost anywhere, including under bodies of water, on the roads, and within any building’s footprint.

It has also been a popular recommendation to have the Prop Snapping mod downloaded as well, but even by itself, the Prop & Tree Anarchy mod allows for more inventive creations. 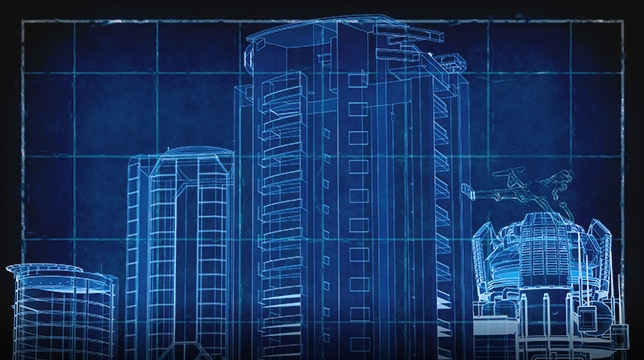 One factor about playing base City Skylines is that there are 25 purchasable areas, yet players can only buy nine of them during any game.

The All 25 Areas Purchasable mod allows you to purchase the remaining 17 areas once you have unlocked the last milestone.

Because this mod only works when you have unlocked the last milestone, it will not allow you to purchase all 25 areas at the beginning of the game.

This mod provides players with all the space they could want to make megacities or multiple neighborhoods and other creations. This simple mod works on all versions, including on Windows, Linux, and Mac.

The only way you could power one end of the city to the other was through power lines.

However, the mod ensures that roads become great electricity conductors with electric roads, allowing electricity to flow throughout the city without those ugly electric poles.

Replace electric poles with electric roads with this mod. Not only will your city look tidy but also you’ll have every nook and cranny powered without any troubles later on. It’s a pretty great quality of life mod. 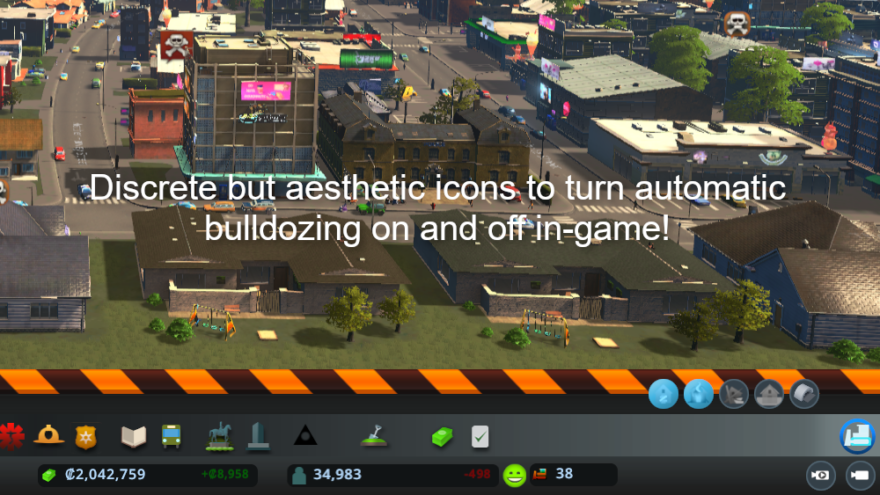 Oftentimes when an apartment, house, or commercial complex is abandoned, gamers are required to remove them using the bulldozer. However, if you’re on a large map finding abandoned buildings to bulldoze can take a lot of time and effort.

With bulldoze it you can easily have abandoned buildings removed automatically without the need to manually bulldoze them.

This is the best thing that has ever happened to us when we came across this mod, Arigato modding community, Arigato! 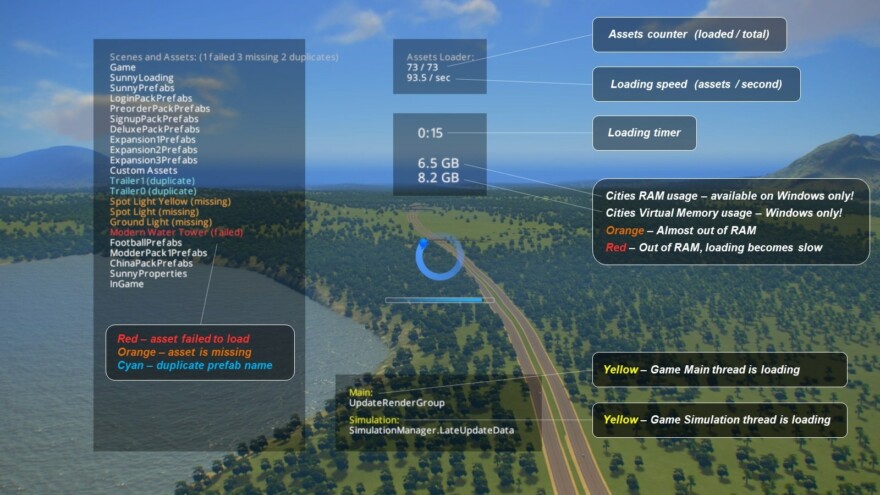 The game is known to have really slow loading times, and this gets even slower if you have a couple of mods active. Loading screen mod comes as a halo in times when you just can’t wait for the in-game assets to load.

The mod ensures faster loading times allowing users to simply get into the game without having to wait too long. It utilizes the system’s memory more efficiently. Why wait when you can spend more time gaming? 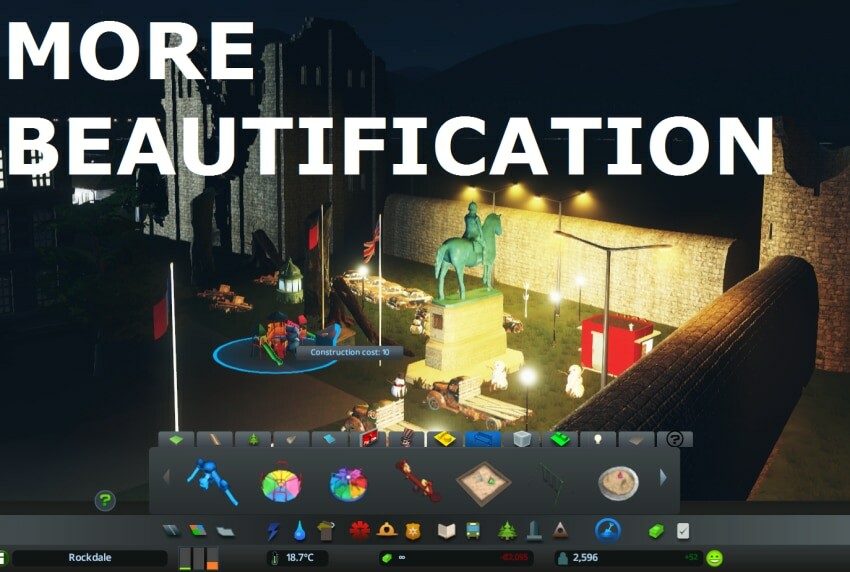 You’ve got the perfect city built, but it lacks a bit of aesthetic appeal. Worry not, more beautification allows gamers to add over 60,000 props in their city, making it stand out from those neighbors of yours.

Take the building game to a whole new level by improving the entire look of the city. You can add statues, banners, street lights, boards, neons, and more. Bring your city to life with more beautification. 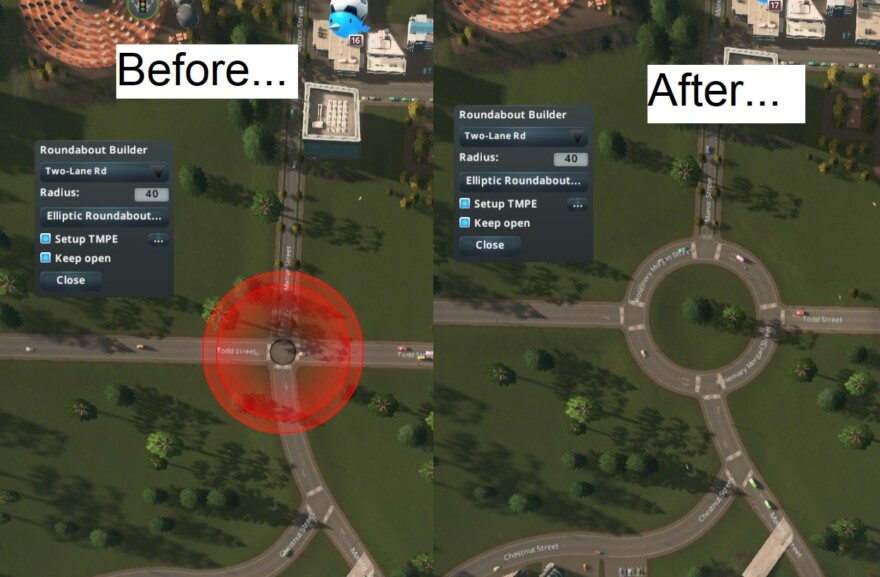 The biggest challenge faced by gamers in cities’ skylines is traffic management. It can get hectic and lead to chaos if you don’t have proper road networks. Roundabout builder easily builds roundabouts automatically on your already existing roads.

You don’t have to do any dirty work by deleting existing roads and building new ones. Too much clutter can have you in a panic mode, which is why roundabout builder mod is a great welcome to easy construction gameplay. 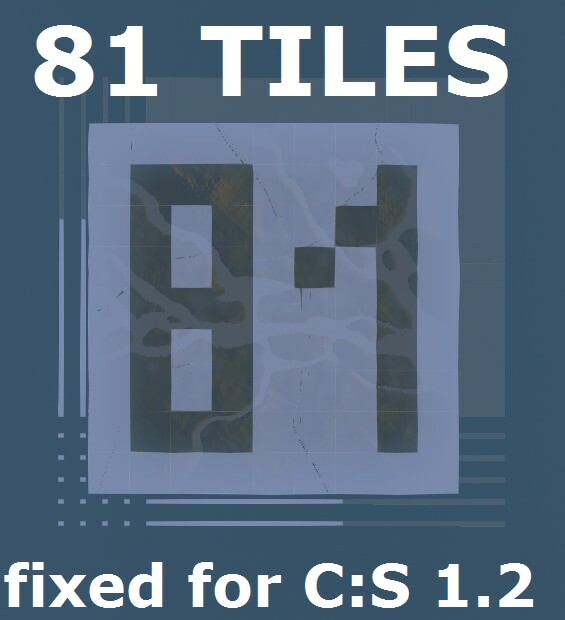 The base vanilla game only allows the construction of cities on 25 tiles, which can be a hurdle for those with a vast imagination and enough dedication to bringing that imagination to life.

81 tiles are for all those who have maxed out their landscape and are looking for more real estate to continue their building endeavors.

The mod increases the current 25 tiles landscape to 81 tiles, which are more than enough drawing board for any gamer builder to put their ideas in place. 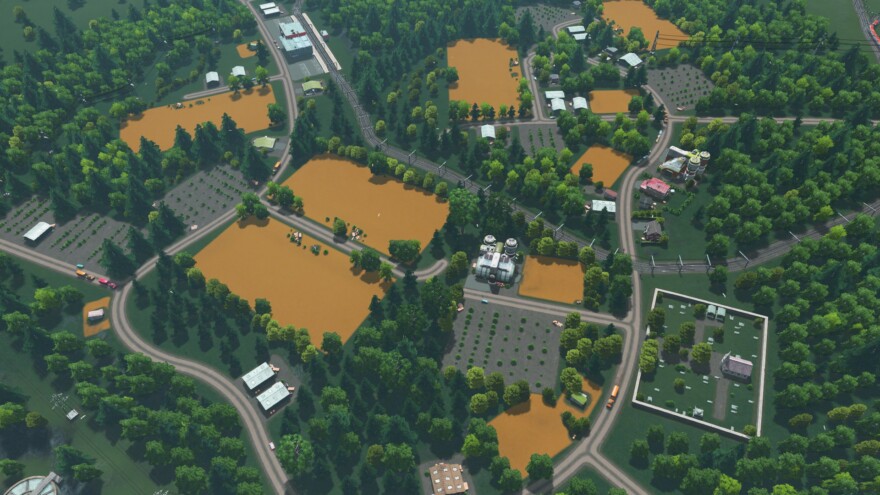 You may have traveled in the real world and seen how agricultural spaces provide a nice green aesthetic to the city, bringing the city and its people as one. You can have that in the game as well with agricultural field collection.

With up to 5 different fields to choose from, have your city turn into green eye candy with lush patches of agricultural land among industrial, commercial, and residential zones.

Bear in mind that these are just visual enhancements, and the agricultural lands do not generate any income or attract tourists.

Those that want to turn their city into Venice with canals and water flowing through the city know how difficult it is to build canals in the original game.

Canal blocks have modular pre-built canals that gamers can use to spread canal networks across their city much faster.

The best thing about having canals is that they increase residential properties’ value and even add a beauty element to the city. If you’ve never had canals before in your city, get this mod and make the construction process much easier. 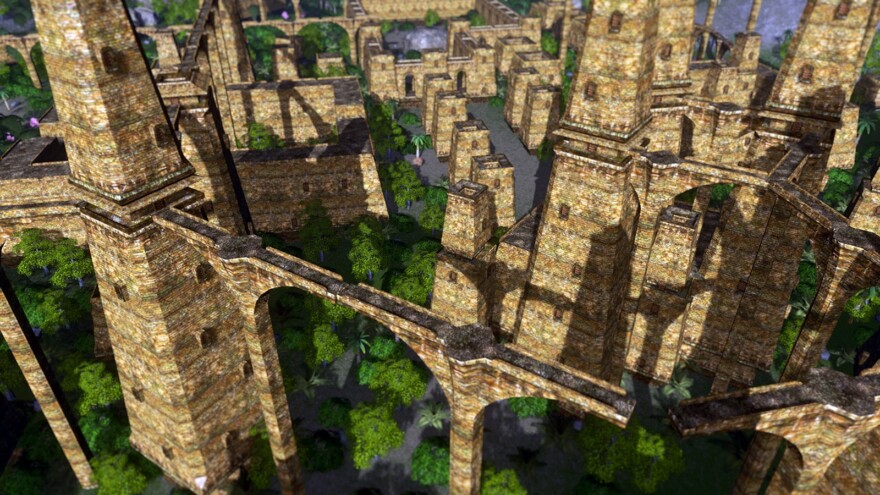 If you’re the kind of gamer that has put a serious number of hours into Cities: Skylines, then you must be getting tired of the same old buildings, roads, and other elements of the game.

Quad will have you experience cities’ skylines like never before as the mod converts buildings, roads, and other elements into something from the dystopian era.

Gone with the old, in with the new. Feel a huge difference as you see the city develop into something modern while your citizens rave about living in the future. 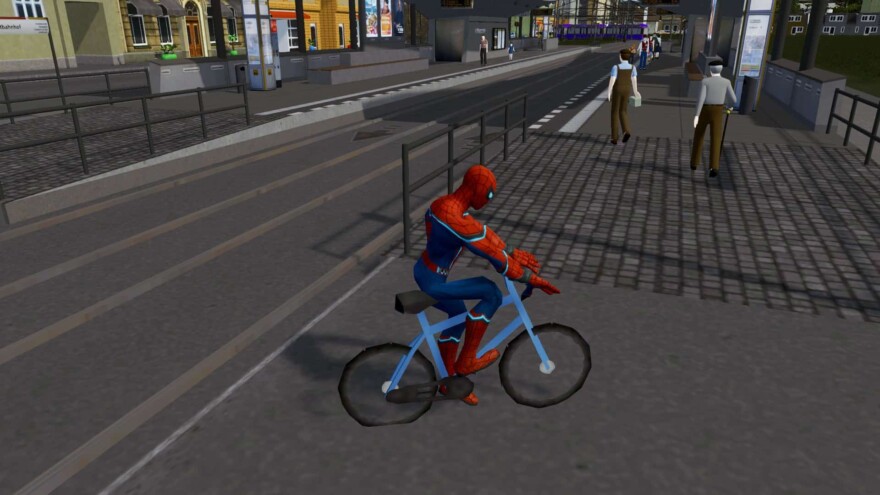 What? Yes, you heard us right. Now you can have your very own friendly, amazing spider man slinging…er, cycling around the city, keeping the neighborhoods safe and secure.

Everybody loves having spider man around, so why not have one roam around your city with the amazing spider man.

To be honest, Spiderman doesn’t do anything except cycle across the city just like an ordinary citizen, but hey, it’s good knowing that he’s around. So why not have Spiderman roam around your city if you can? 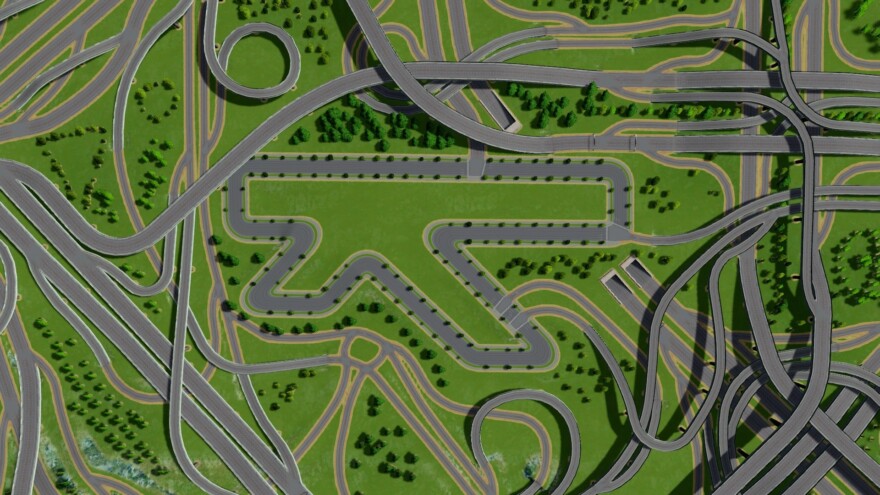 This is a perfect mod for those looking to replicate their city’s infrastructure in their game map.

Timboh’s marvelous interchange emporium is a great way to save time on constructing interchanges and simply pick one from the options available.

A great way to have a neat and clean city without the hassle of making one. 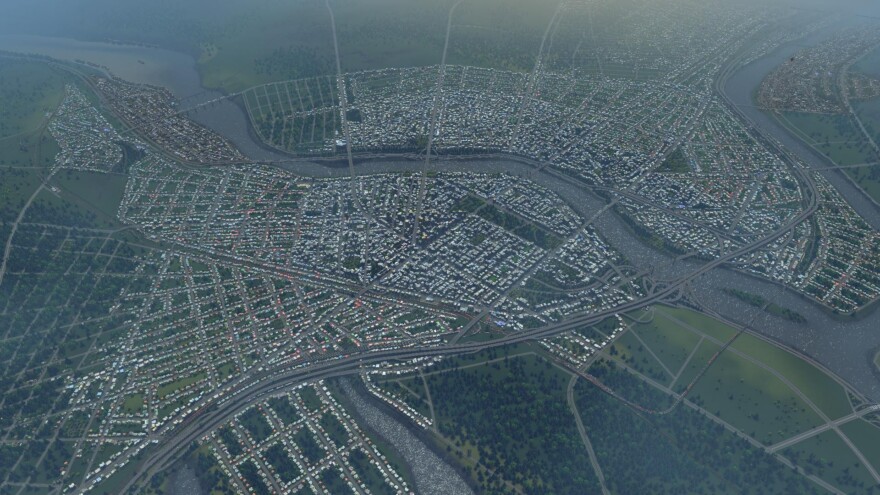 Have the creativity to create something grand? Got a bit of spare time on your hand to dedicate towards your scheme? Have a go at replicating real-world cities from Los Angeles to New York, Italy, Poland, and more with real-world cities map mod.

Take your time as you create the perfect city based on real-life cities. The mod provides you with the perfect landscape to bring your dreams to reality. 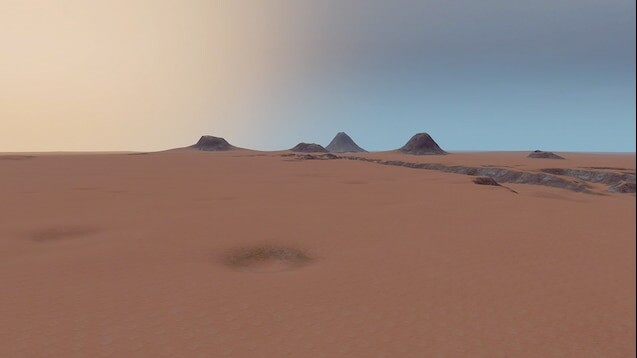 Tired of constructing cities on Earth? Why not take your chance with Mars? Mission to mars provides a landscape similar to what you might find on mars allowing gamers to create their cities in harsh terrain environments.

If you always wanted to find out how skyscrapers, industries, and commercial units would look like on Mars, then get this mod.

It’ll give you a different visual aesthetic keeping things interesting while the building mechanics remain the same. Bring your expertise to Mars. 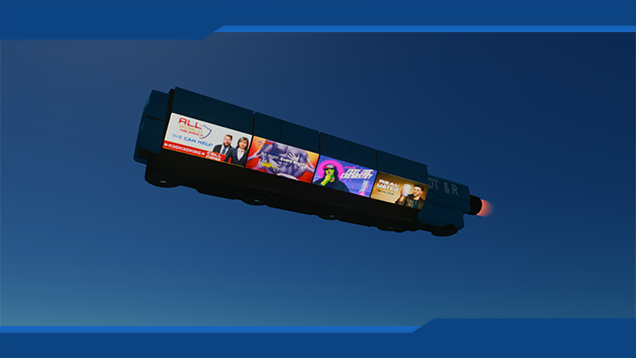 We’ve already mentioned a mod earlier related to the dystopian future and think this would go perfect with it or even on its own. Ad ship cyberpunk 2077 introduces an airship that flies across your city and looks grand.

Have your citizens in awe as the cyberpunk airship makes the way in the skies to display big corporate brands. This is purely an aesthetic as the ship does not add or generate any income.

Airports are considered to be the lifeline of a city as tourists and citizens travel within the city and outside, generating revenue and traffic. S

ince airports are that important, it is only befitting to have an entire mod with a collection of props and items that will help enhance the airport operations and add an aesthetic appeal to your international airport.

The FBS airport project has everything from better planes to shuttle trains, no seagulls, airport roads, and more, all available in this generous mod pack.