This medieval tactical grand strategy game is one of the most approachable to newcomers in the genre, despite its industry-standard complicated appearance.

Crusader Kings III did nothing but improve from its previous version. Paradox Interactive has made a great entry into this type of game and the mod scene.

The modding community around CK3 is healthy thanks to the developers who encourage and support people modifying the base game.

Daddy Pika’s Cheat Menu is a massive catch-all of popular Crusader Kings 3 mods. “Cheat” is right there in the title.

This mod, like other full menu mods, lets players modify any in-game parameter that can be changed.

Arrange marriages, edit contracts, spawn characters, convert your people to different religions and cultures; the possibilities go on and on. Brute force your way over any challenge in the game.

This mod is for those players who want to play around in a CK3-style sandbox, not those who are still enjoying the challenge of playing regularly.

This mod is not our favorite, but we can’t deny how useful it can be. 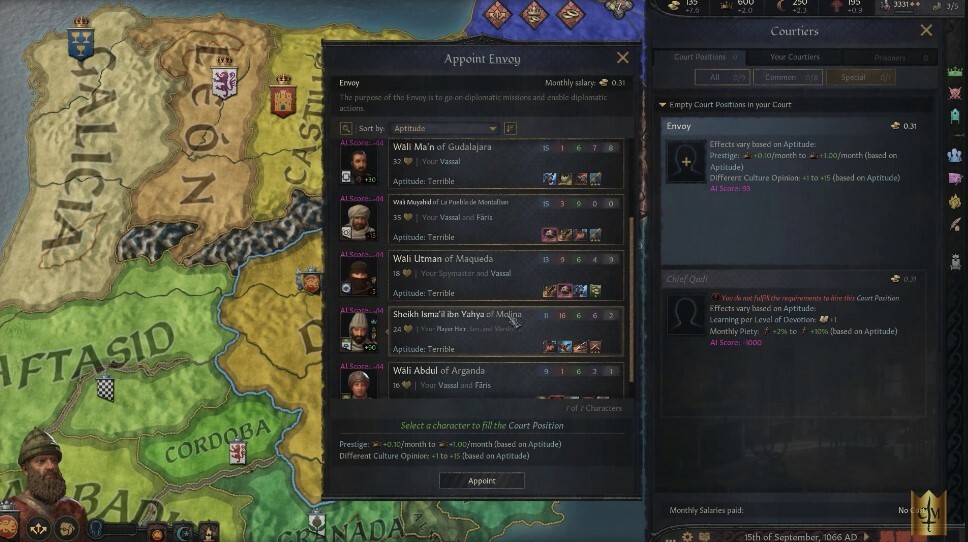 A Diplomatic Envoy is a new role that this mod adds to Crusader Kings. Once installed, players will be able to hire envoys through their court positions menu under the ‘Special’ tab.

Once hired, the envoy can be deployed to make contact with other rules within diplomatic range.

In-game, the mod itself states, “The purpose of the Envoy is to go on diplomatic missions and enable diplomatic actions.”

They are ambassadors of sorts, which make the diplomacy process smoother. This mod shines when used in combination with a compatible total conversion mod, which is the true endgame of CK3.

Graphical User Interface Plus, GUI Plus for short, is a slight visual upgrade for several interface elements.

This mod saturates the colors in the attributes menu, army bars, and the lifestyle trees menus. It’s not major, but having more visual appeal never made a game less fun to play.

We find the color schemes in CK3 to be a little muted for our tastes, anyway. This little mod is good for that.

Even with these minor alterations, over time, players will notice the difference in their enjoyment.

Faction members will have an icon in their character view as well as a tooltip that gives a summarized breakdown of their faction membership and status therein.

This quality of life perk is worth the couple of minutes it takes to install this mod.

Seniority for Everyone is a fun toy of a mod that offers a novel CK3 scenario to explore.

This mod lowers the difficulty associated with achieving House Seniority to the same level as partition.

This makes the game AI defer to House Seniority over other statuses. The resulting state of the world and its kingdoms can be messy; plan accordingly. 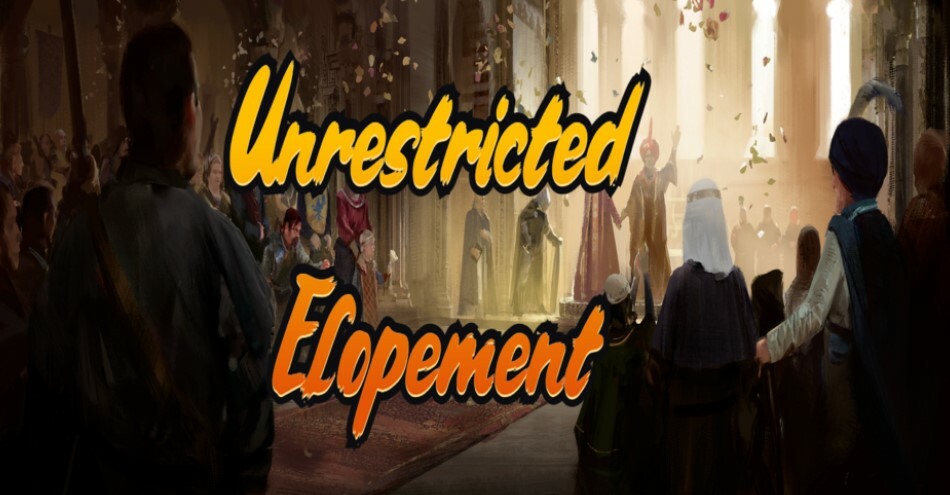 Unrestricted Elopement is a mod that offers ultimate freedom with the marriage system in CK3.

There’s no good reason a player acting as a god in games like this should be held back by things like faith and technicalities.

This mod allows you to execute marriages that the game would typically forbid based on the faith and culture parameters.

Fancy a fellow ruler? They are no longer off-limits. Adverse marriages won’t affect your piety score nor result in negative traits as they usually would. Love prevails, as the creator says.

There’s a fine line between emperor and god; this mod blurs it even further in the world of Crusader Kings III.

Immortality Improved grants players the ability to gift any character unending life as well as play as an immortal ruler.

Without irritations like the natural lifespans of your units, you can focus your diplomatic and conquest strategies in new, tactical ways.

True immortality is very different from a certain kind of dark undying another popular mod offers. Check out #1 on this list to learn more.

This mod lets you disregard the succession system. 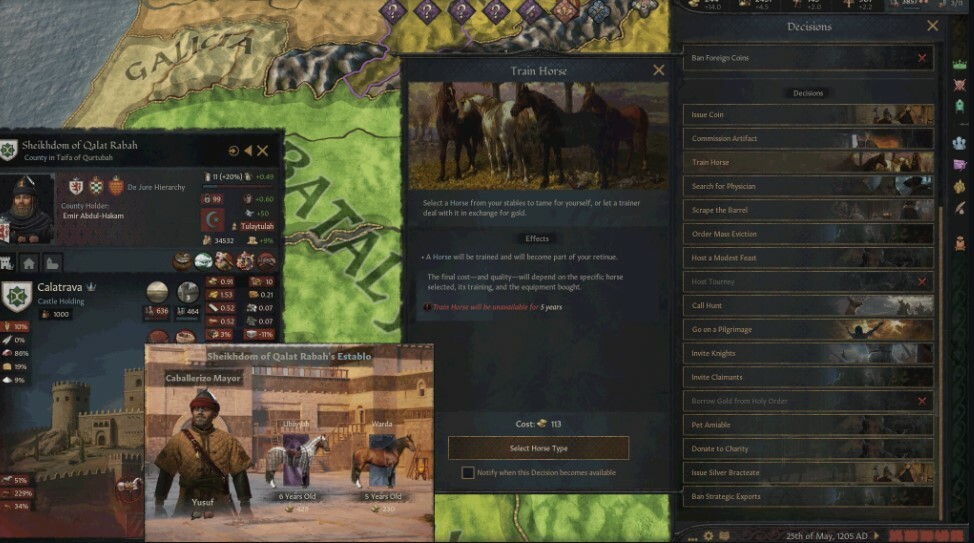 This extensive mod adds a fully realized medieval trade system to CK3. It’s more like a tiny expansion than a simple mod. Mint currency, extract natural resources, and barter with the world.

Dynamic Trade Routes introduces a monetary system and coins along with dozens of designs for the currency.

DTR favors historical realism to gameplay balance; this results in resources being placed around the world accurately, not fairly.

The player takes the role of a Medieval Lord as they manipulate the trading routes.

Unified UI is a basic mod management suite and UI patch. It streamlines the hassle of modding for players that want to make mild changes to the base game and get on with playing.

Players can enable or disable a variety of mods when they start up the game. If any compatibility issues arise over time, the mods can easily be disabled or updated. No single mod depends on the others.

The Better Battles Mod injects new life into the battlefield action of CK3. It’s “Warfare, Reinvigorated.” The name says it all.

Better Battles adds events to combat that make the player feel more involved and immersed in the battles their armies face. Events include duels, sieges, and more.

These events make the strategic elements more engaging through creative lore additions and tough wartime decision-making. We think this mod is just a plain old upgrade to the vanilla game.

The goal of the Crusader Kings modding community and many of its most popular mods is to enhance realism and immersion.

Unit Packs Expanded is full of new in game units for different cultures all over the map. This mod features sets for more than ten different cultures, including English, Iberian, Berber, Persian, Burmese, and Tibetan. The list is ever-growing, too, with more cultures planned.

UPE requires another mod, Ethnicities and Portraits Expanded (EPE), to function properly. This mod is compatible with old saves if the player already uses EPE.

Players may love the realism of Crusader Kings, but sometimes authenticity makes for a tedious game mechanic. Artifact durability is one of those cases.

Artifacts Never Decay removes the item decay feature; it also boosts durability to keep your artifacts intact just in case something unexpected happens in the game.

Some players might see this mod as cheating, but it’s fairly tame compared to the advantages some other more brazen mods enable.

This large collaboration amongst the CK3 community is a must-have for anyone serious about getting the most out of their experience.

If a player is part of the Crusader Kings community, they need the CFP.

Vanilla CK3 lacks some cultural flavor and flair; this mod aims to rectify that. The visual interest and immersion boost from this pack are undeniable.

CFP is an ongoing project with its own wiki for reference. Players can even make suggestions for future additions to the pack. 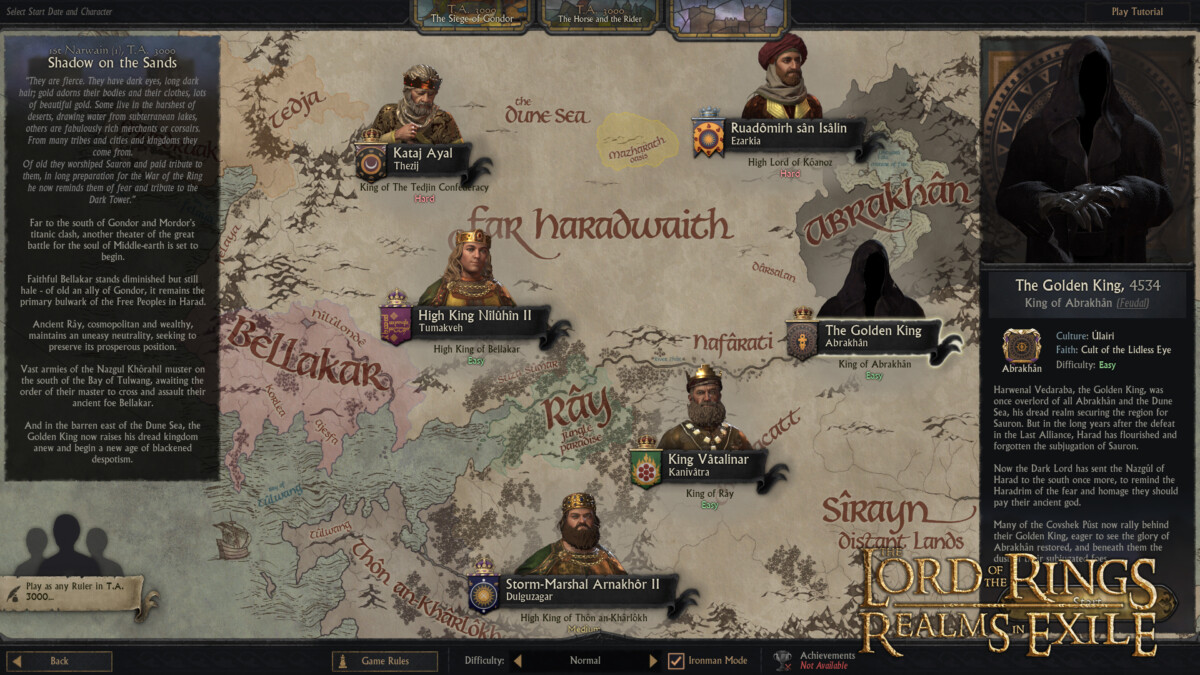 This wildly popular mod for Crusader Kings III will thrill any Lord of the Rings fan. Even if you’re only a casual fan of the films, this mod has plenty of familiar content to enjoy.

Realms in Exile transports the player and their grand plans straight to Middle Earth.

Every facet of CK3 is redesigned and repainted to represent a character or place from J.R.R. Tolkien’s fantasy world.

Players have the opportunity to play as rules like Sauron, The Golden King, and Denethor; each has its own lore-accurate family, buildings, and culture.

Crusader Kings III is THE perfect game to be adapted to the world of LotR. If J.R.R. were a gamer, this is, without a doubt, the grand strategy game he would be playing. 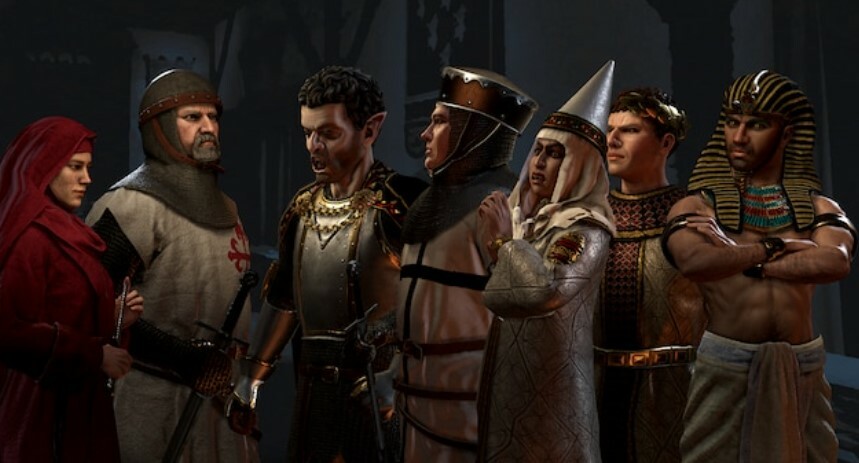 A CK3 mod list would not be complete without this epic total conversion mod. We’ve officially ditched medieval realism in favor of gothic fantasy. Heck yeah.

As a vampiric prince, the player can still be killed in many ways, so the succession system is still in place; it just doesn’t matter as much.

This mod introduces a new mechanic: Hunger. Keep your blood supply in check or suffer the consequences.