The world of Resident Evil changed forever when players were introduced to Lady Dimitrescu and her daughters in the eighth mainline Resident Evil game.

Them aside, RE8 is an entirely novel tale among its peers in the franchise. Playing the game is a horror-fantasy adventure from start to finish.

As if Ethan didn’t have it tough in RE7, now he has to contend with mythical eastern Europe. There is no rest for devoted fathers made of bioengineered, psychic mold.

With Resident Evil Village being a single-player game with a narrative focus, most of the mods are cosmetic and lore-related. 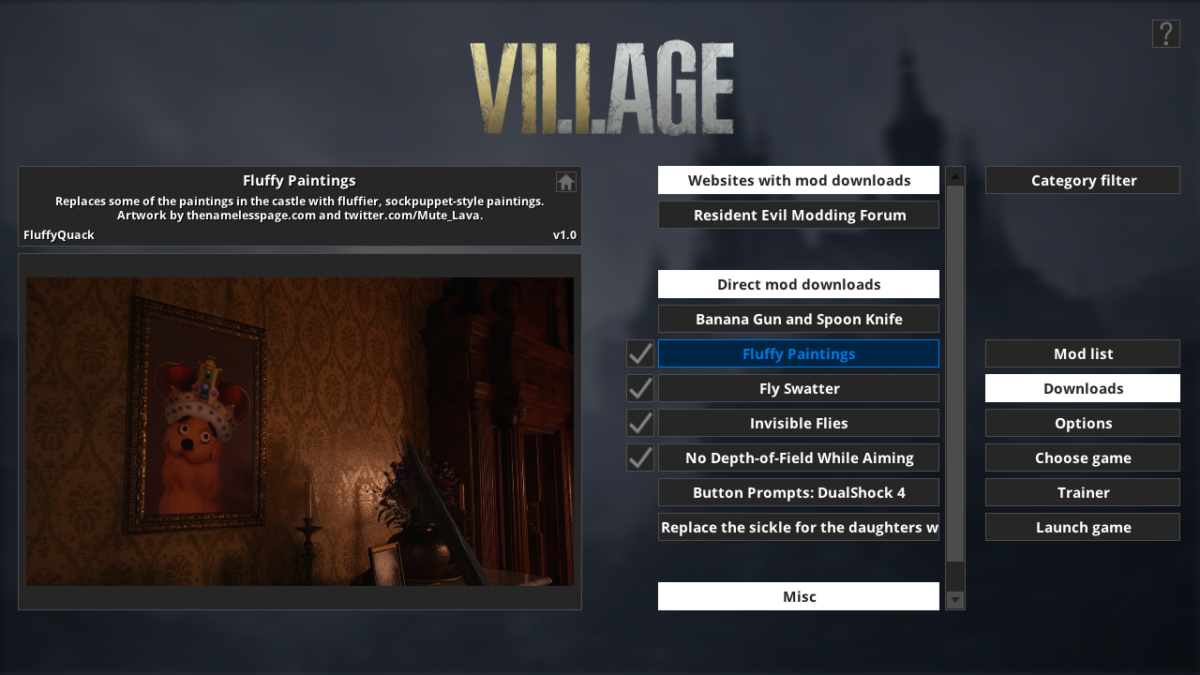 The Fluffy Mod Manager is the most important mod you’ll download for Resident Evil Village.

Fluffy makes it possible for us to mod Resident Evil 8 in the first place. We put this at #20 because it’s the one you have to download first if you want to get into modding.

As a bonus, this mod offers a field of view trainer and vignette on/off toggle option. This mod is non-optional if you want any others. 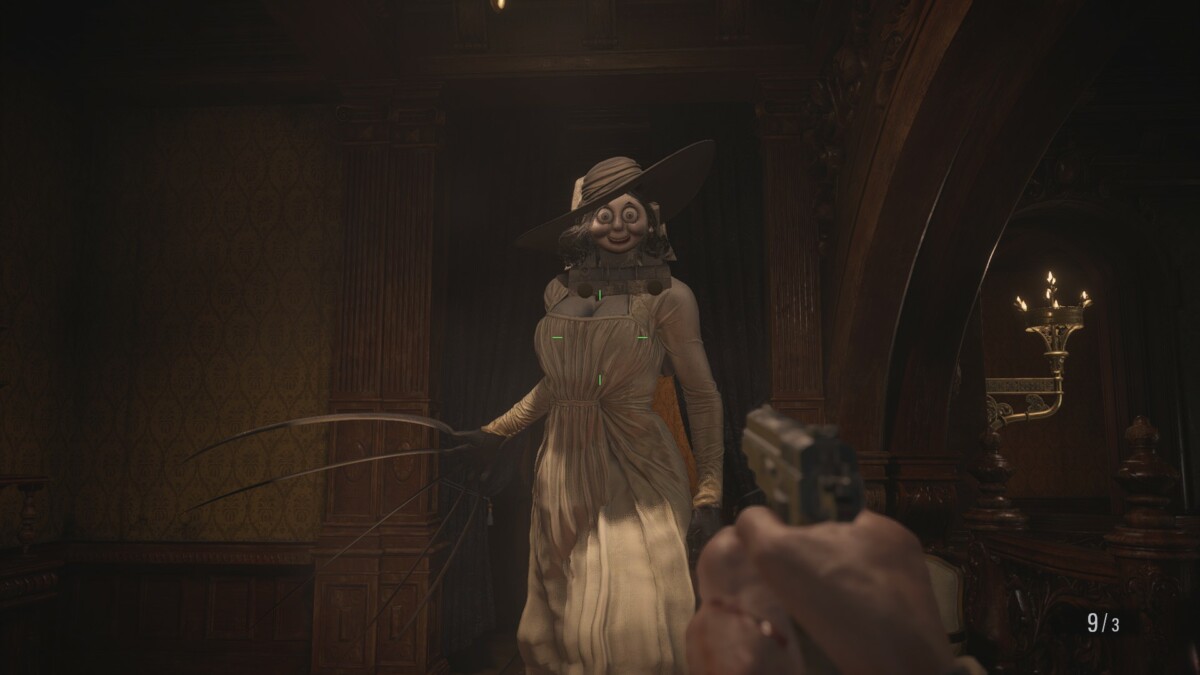 We think Resident Evil Village is one of the most re-playable games of its genre. Once the fear players get from Castle Dimitrescu wears off the first time around, it’s time for some fun.

This mod replaces the stalking beauty’s usual visage with that of the beloved retro children’s character Thomas the Tank Engine. Ridiculous? Sure. Necessary? Absolutely. 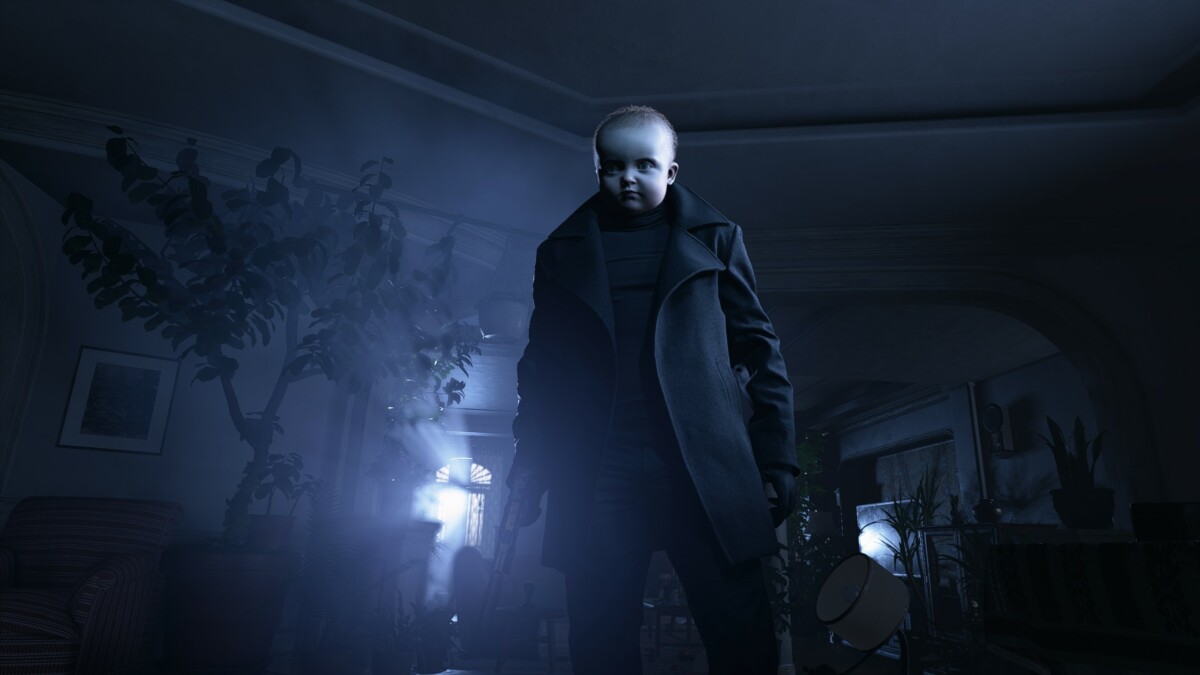 This mod makes the gruff and supremely unreasonable (in this game) Chris Redfield and takes him down a few notches.

Baby Over Chris Face replaces Chris’ face with that of a giant baby.

Gaze upon the smooth skin, fuzzy head, and big cheeks of a human baby while Redfield ransacks your home, abducts your daughter, and attacks Mia!

The cuter appearance softens the emotional blow at the beginning of the game. (Serious note: Why didn’t he just explain what was going on to Ethan? It would have taken less than a minute.) 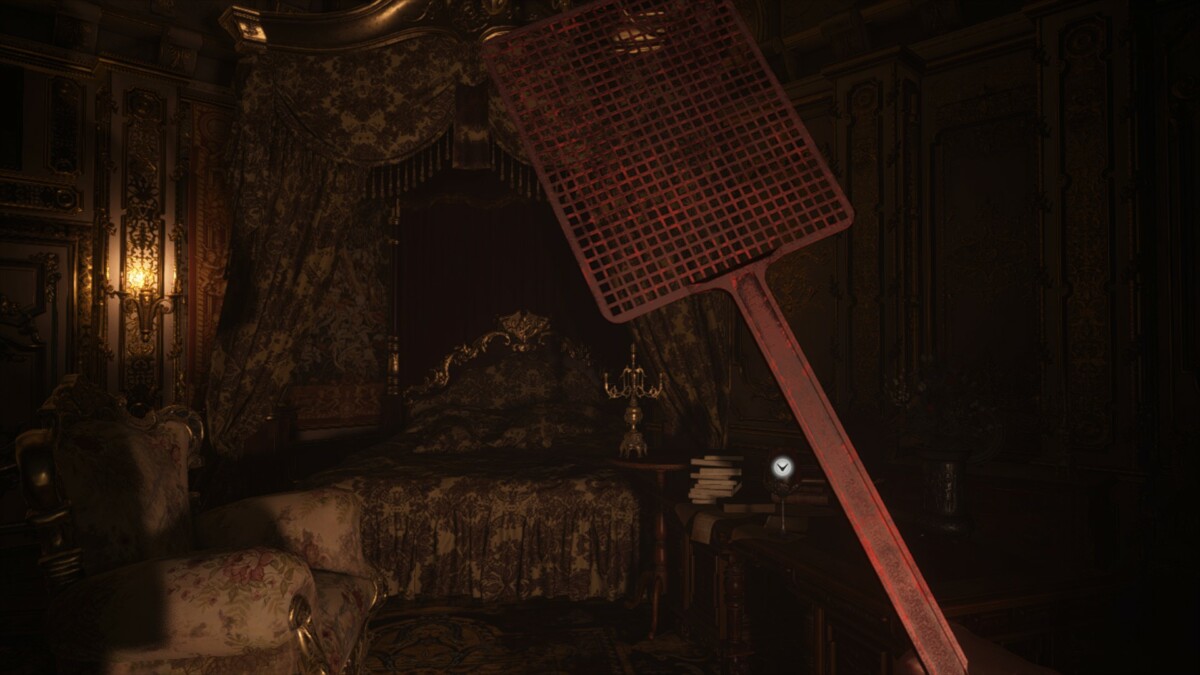 Fly Swatters give you the perfect weapon for facing the Dimitrescu daughters. The ultimate melee weapon.

A knife may not be the best choice of weapon for fighting three vampiric monster girls that turn into clouds of black flies. What Mr. Ethan Winters needs is a fly swatter, a good one.

This mod replaces Ethan’s knife with a classic plastic fly swatter for swatting those bloodthirsty siblings and whatever else you think needs a good smack. 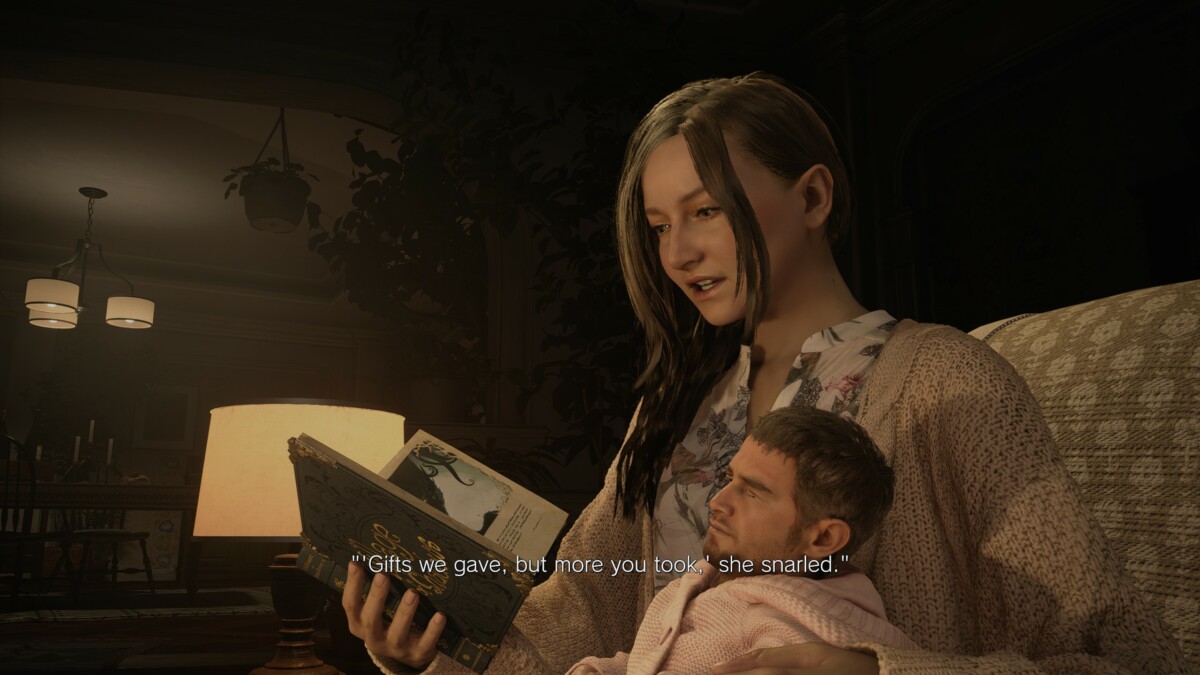 Replace your beloved child who may or may not be made of fungus with Mini Me Chris.

From the same person who made Baby Over Chris Face, this mod is another jokey mod.

Replace Ethan and Mia’s darling child Rose in the opening of the game with a teeny tiny Chris Redfield with a fully adult head.

As the creator says, it might be a long way to go for a little joke, but it’s well worth it. No joke is too dumb for a dedicated modder. 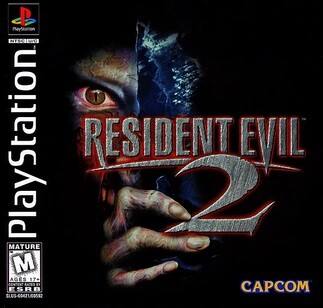 Resident Evil 2 Inventory Sounds is a throwback for people who’ve been fans of Square Enix’s horror franchise for a while.

We’ve come a long way from smashing together herbs in a police station, but somehow not far off at all.

Resident Evil 2 is the first defining title of the series for a lot of gamers. Infuse Resident Evil 8, Village, with the nostalgia that comes with these iconic inventory management sounds.

A similar mod using the sounds from RE4 might be on the way from the same creator. We’d love that even more. 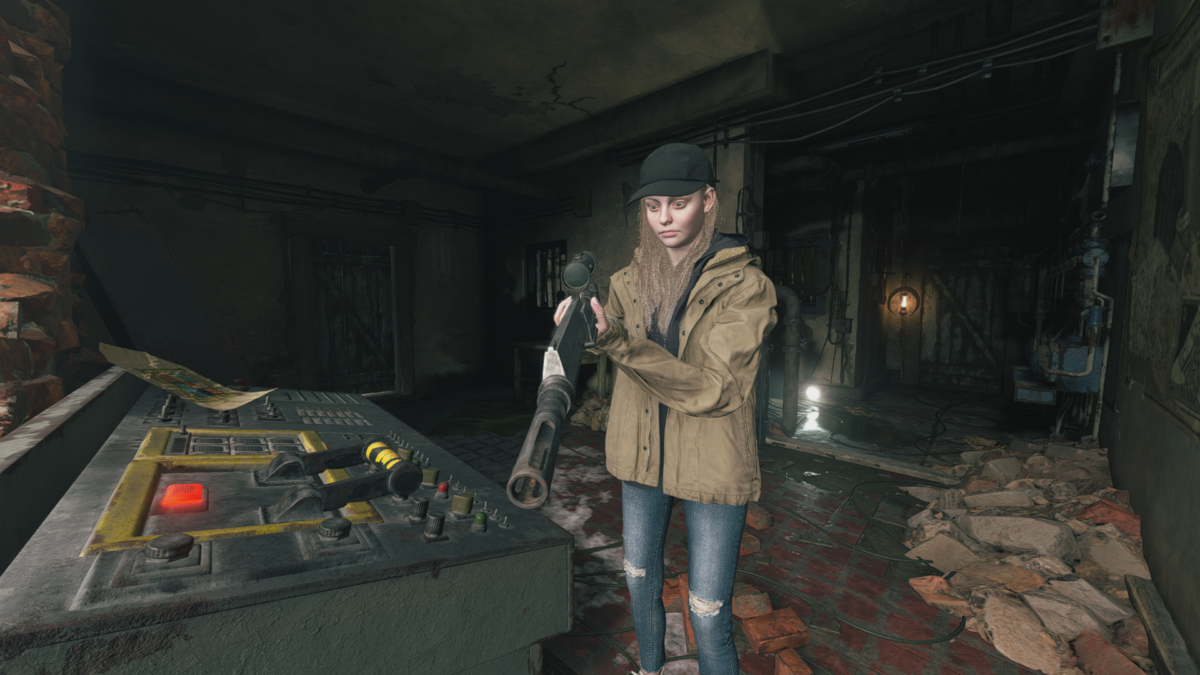 This mod lets you play as Rose Winters, Ethan and Mia’s daughter.

There are no gameplay differences between playing Resident Evil Village as Ethan vs. modded Rose; playing as Rose is for people who are into the characters and story of RE8.

This mod is great for additional playthroughs with a slight change in visual tone. 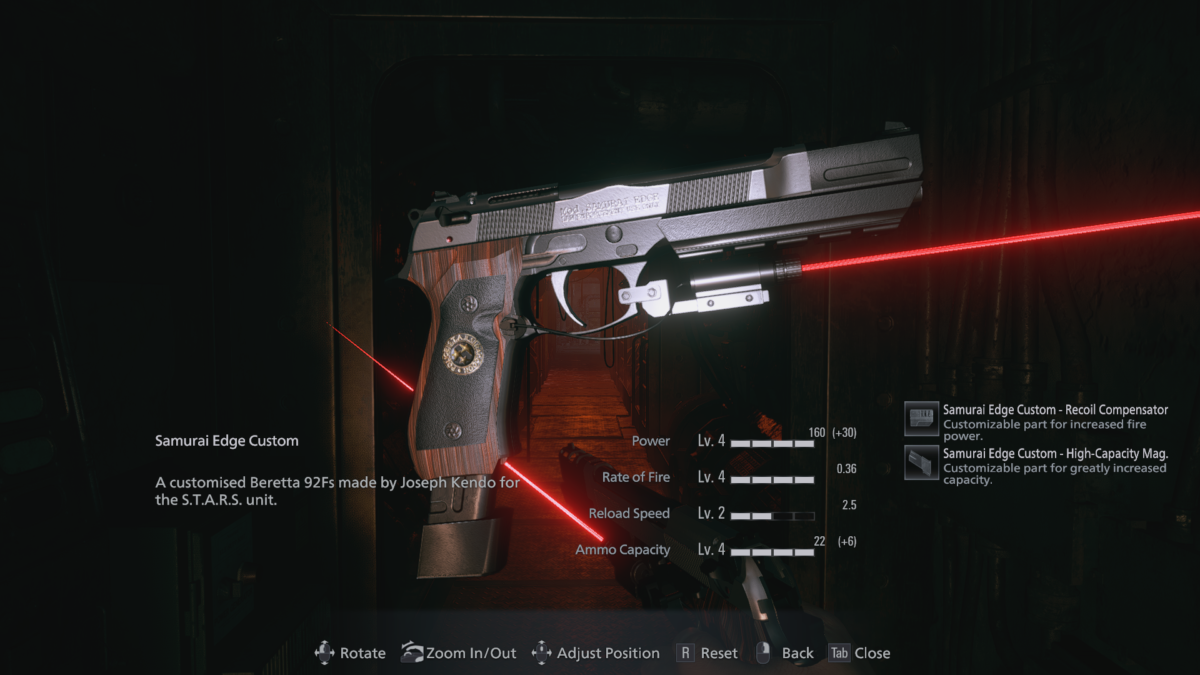 The first weapon mod on our list, this one makes Ethan even more efficient at killing monsters.

Samurai Edge is a replacement for the tried-and-true classic LEMI handgun. If you’re not the best at aiming, this could be what you’ve been waiting for.

The gun features a laser sight which makes headshots much easier since this game does not feature neat FPS crosshairs.

Most Village mods don’t have a true impact on gameplay; this is one of the only ones that do. 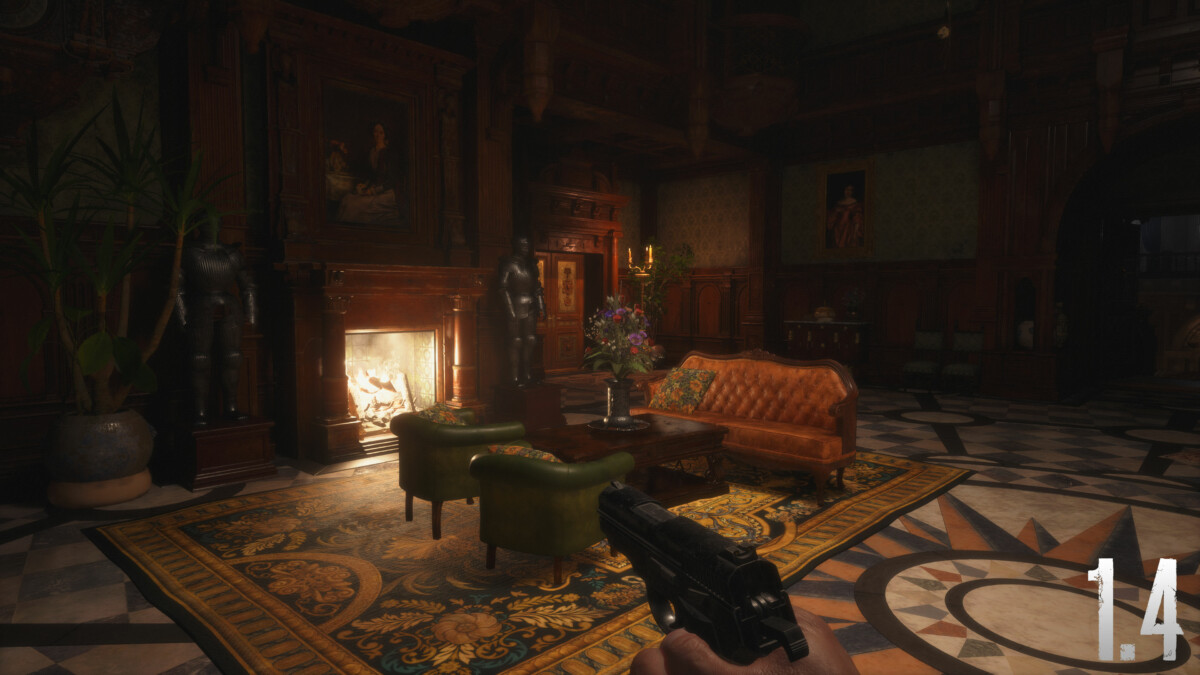 No mod list is complete without a player-made aesthetics upgrade mod.

Resident Reshade offers a considerable upgrade, especially considering how simple it is. By focusing on contrast, sharpness, and color, this mod makes almost everything look better.

Low-light environments, of which there are MANY in RE8, are easier to see, while the landscapes and village itself are much nicer to look at. 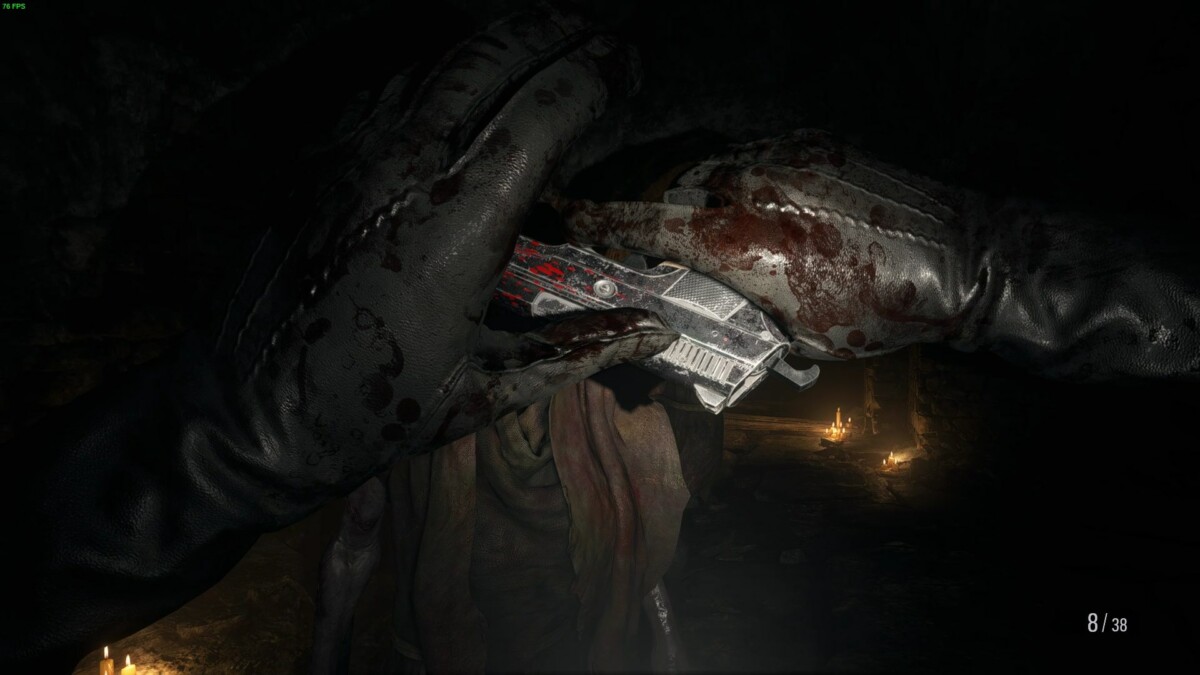 In stark contrast to #17, Cassandra Playable is for players that like and want more of the Dimitrescu daughters.

Another quick replacement mod lets you play as one of Lady D’s girls, Cassandra. Peer through her hood in first-person views and enjoy the fact that she still has both hands. (Or does she? She’s made of flies.)

Slay the lady of Castle Dimitrescu as one of her very own progeny. There’s some poetry in there, somewhere. 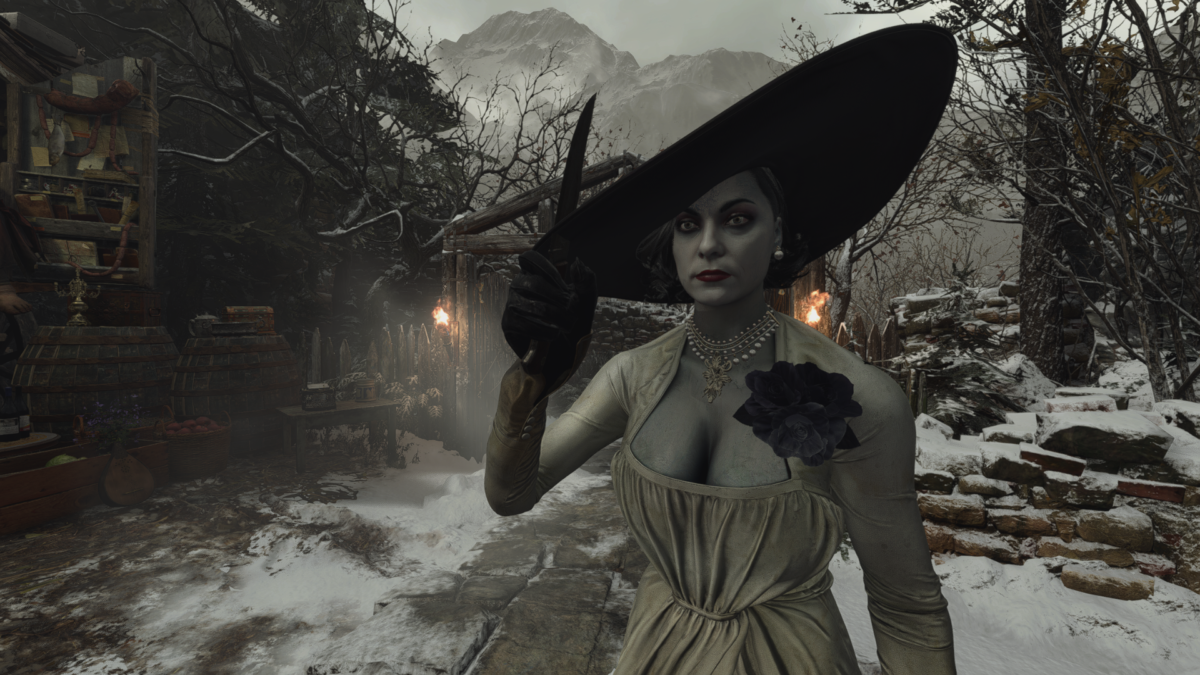 Live out your fanboy/girl/person fantasies and Play As Alcina Dimitrescu, Lady D herself.

For people that haven’t played Resident Evil Village, it’s understandable if they think Lady D, her castle, and her buggy daughters are the star villains of the game; they are not.

Though Lady D is only one of four medium-tier baddies, she has stolen players’ hearts.

Don her giant hat and impressive height as you play through the story AS her. It renders the plot completely nonsensical, but it’s worth it. 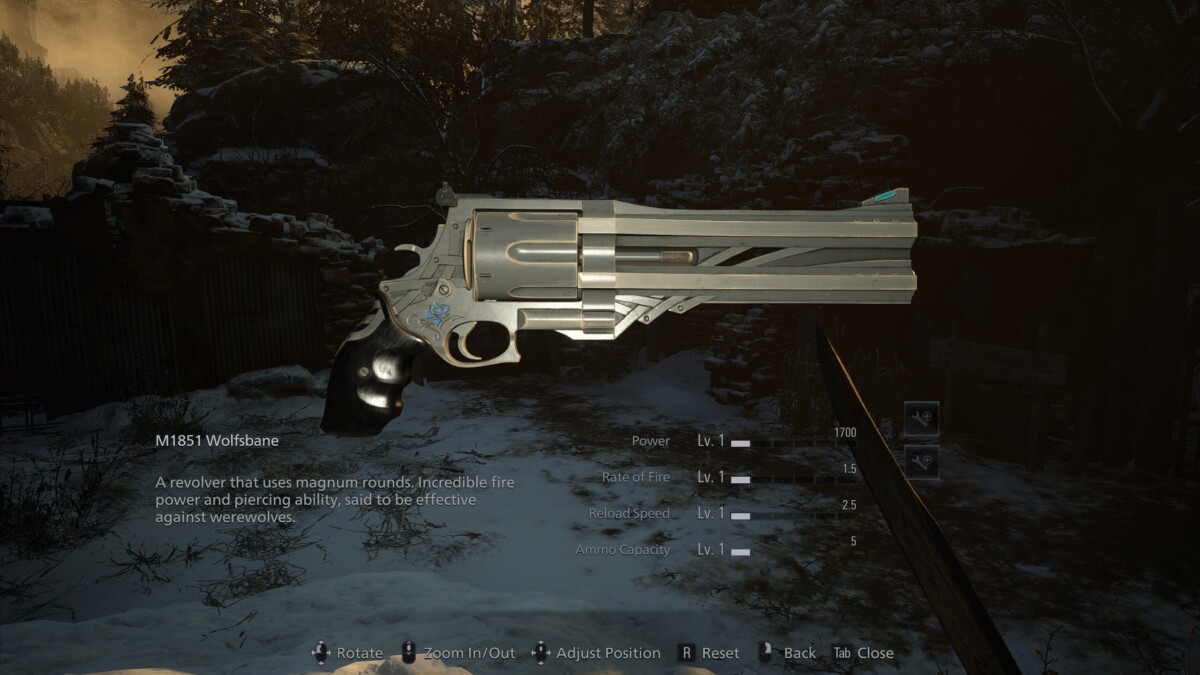 Blue Rose is the first utility-free weapon skin on the list, introducing a Square Enix IP crossover no one asked for or knew they needed!

Swap the Wolfsbane pistol with this classic silver piece from Devil May Cry V. The revolver features bright steel grey metal and a small blue rose etched into the side.

Ethan may not have the power, looks, or longevity of Nero, but he can have his style when it comes to weapons of choice. No angels nor demons are found in the lands surrounding the village. 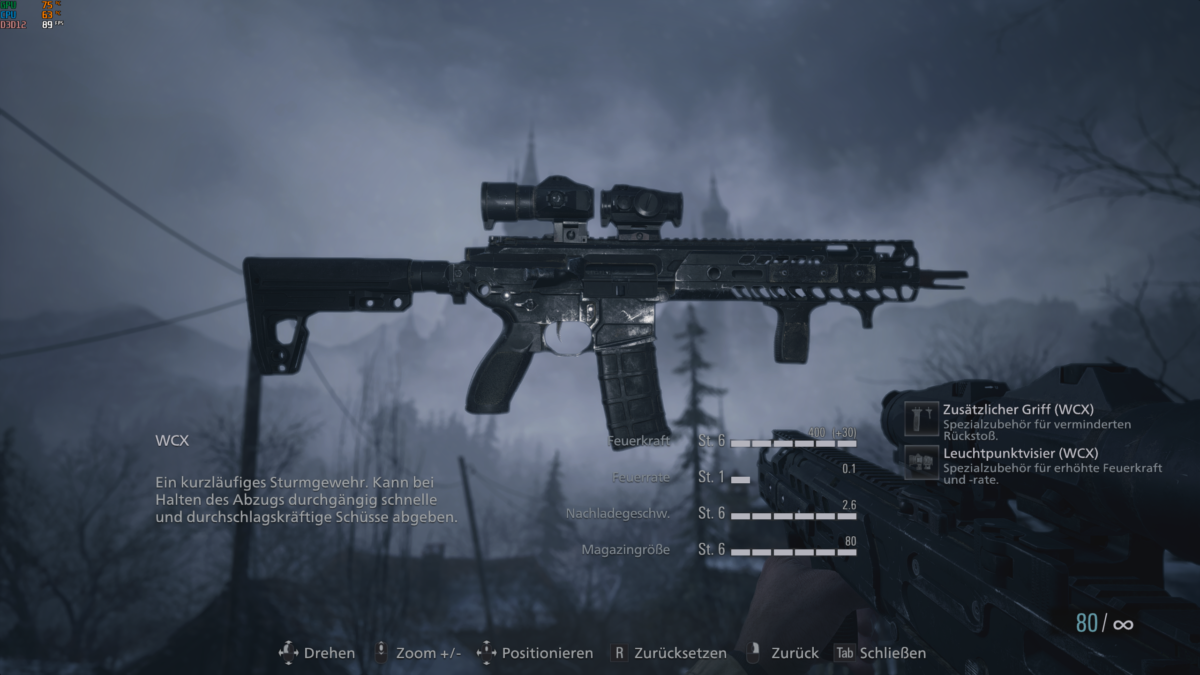 Use Resident Evil Village save data to start the game how you want.

For players who’ve gotten through their first playthrough but don’t want to go through multiple others to accrue upgrades to carry over.

These files are that of a 100% complete saved game with a maxed-out WXC weapon upgrade. Starting an over-powered NG+ run with all the power of these upgrades is a blast.

Take out Urias in the Village introduction! (Spoiler alert: He still shows up again later. Beating him early doesn’t change the story.)

This mod is a good choice for a first playthrough for those players that want a true, easy mode; melt everything in your path and enjoy the story of Resident Evil Village. 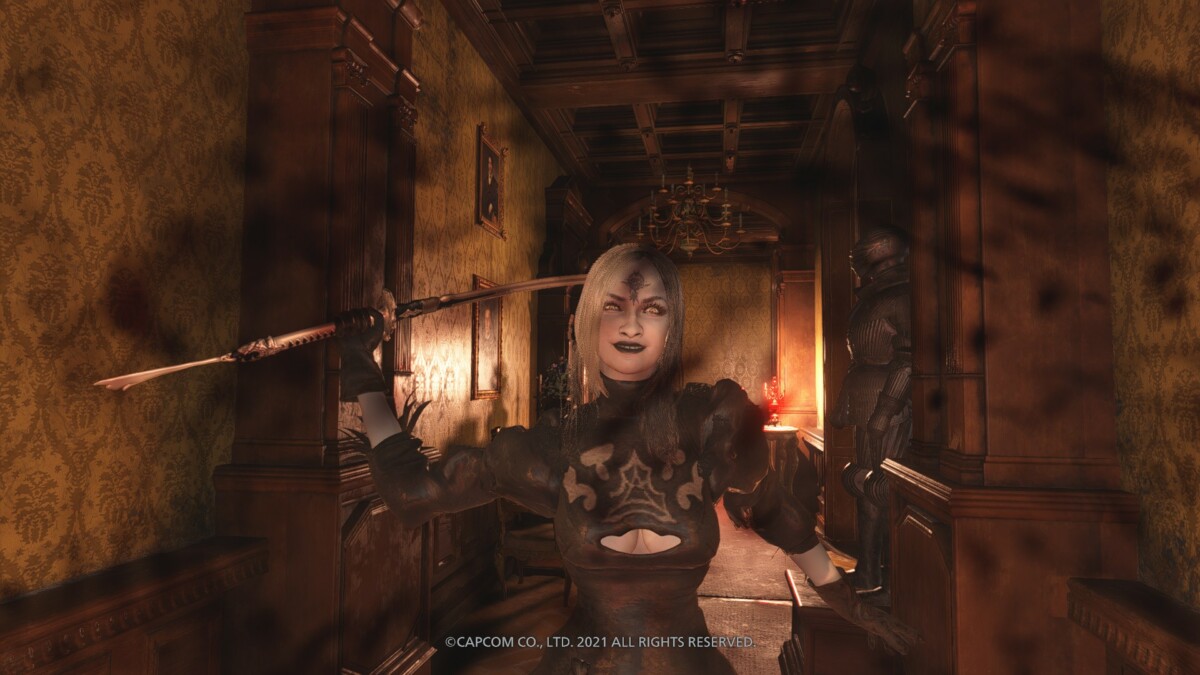 Daughters of Yorha gives the Dimitrescu girls a new style.

Weirdly enough, these far-future outfits don’t look all that out of place in the spooky castle. Their sickles get swapped for classic Yorha swords like a rapier or katana.

What the new gear won’t do is make them more resistant to the cold weather, unfortunately. (Why do they live in the mountains if winter weather kills them…?) 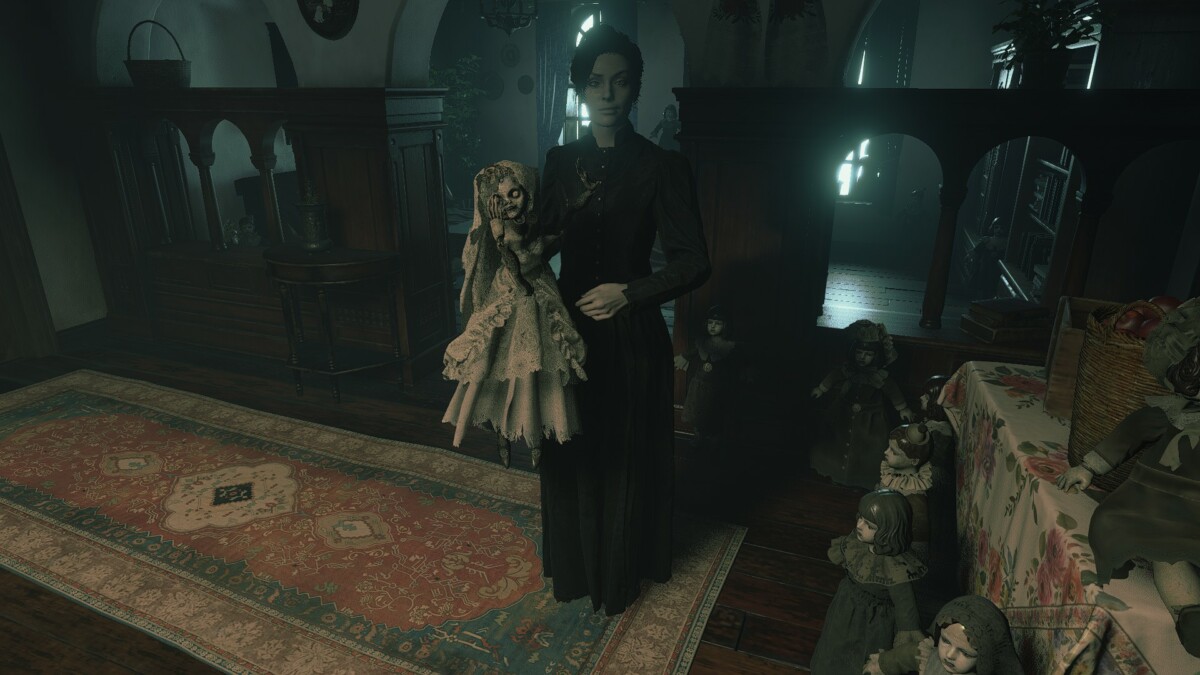 Donna Beneviento, the dangerous doll master of the four lords, is an underappreciated force in Resident Evil Village.

Not only is she responsible for the iconic giant baby monster, but she’s also a complicated, tragic character worthy of appreciation!

Her face was marred by her fusion with the Cadou parasite; this mod fixes that. In all scenes where she appears alive, an intact young woman’s face appears.

This mod is a way to show appreciation to the underrated villain. Together, Donna and Angie offer a different presence than Angie alone. 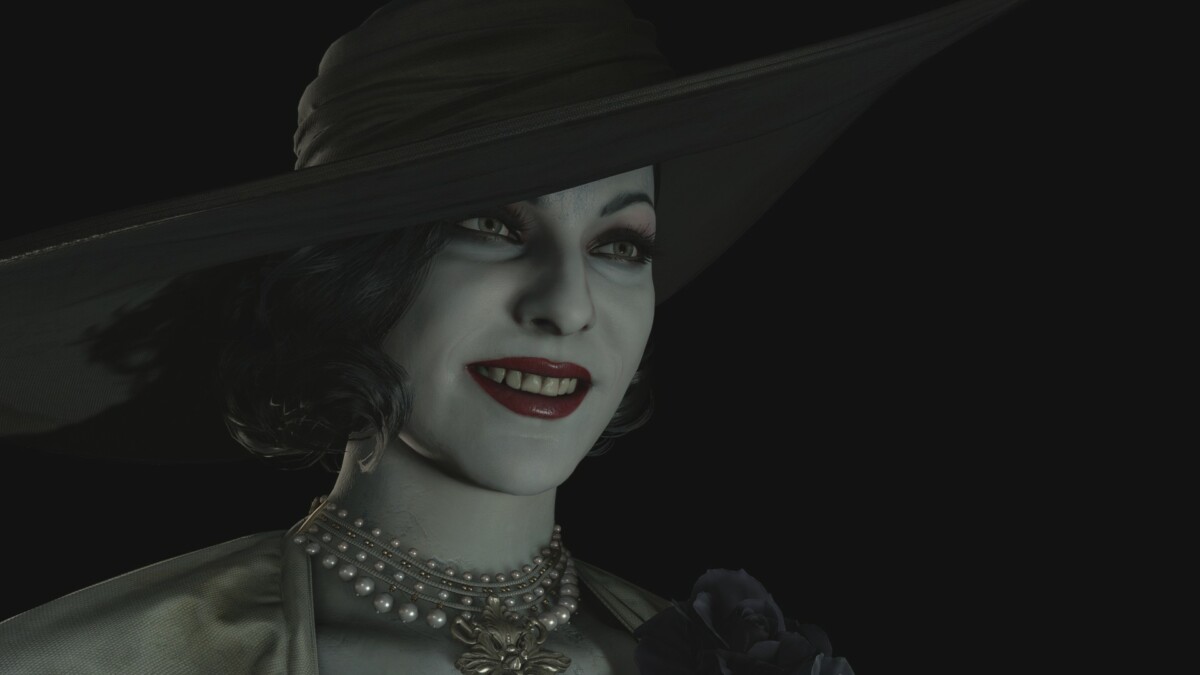 Enhanced Model Viewer is a great compliment to all the hard work the developers did on the visuals of Resident Evil Village.

The viewer lets you examine all of the different 3D models for characters, enemies, and objects found in RE8.

We use this as an opportunity to appreciate the intricate design work done on enemies that is hard to appreciate in the heat of battle.

In addition, this mod can cycle through a model’s animations and swap them, plus textures, meshes, and lighting. It’s a powerful customization tool.

We’ve found ourselves accidentally spending hours marveling at the intricacies and creativity that went into this game’s assets. 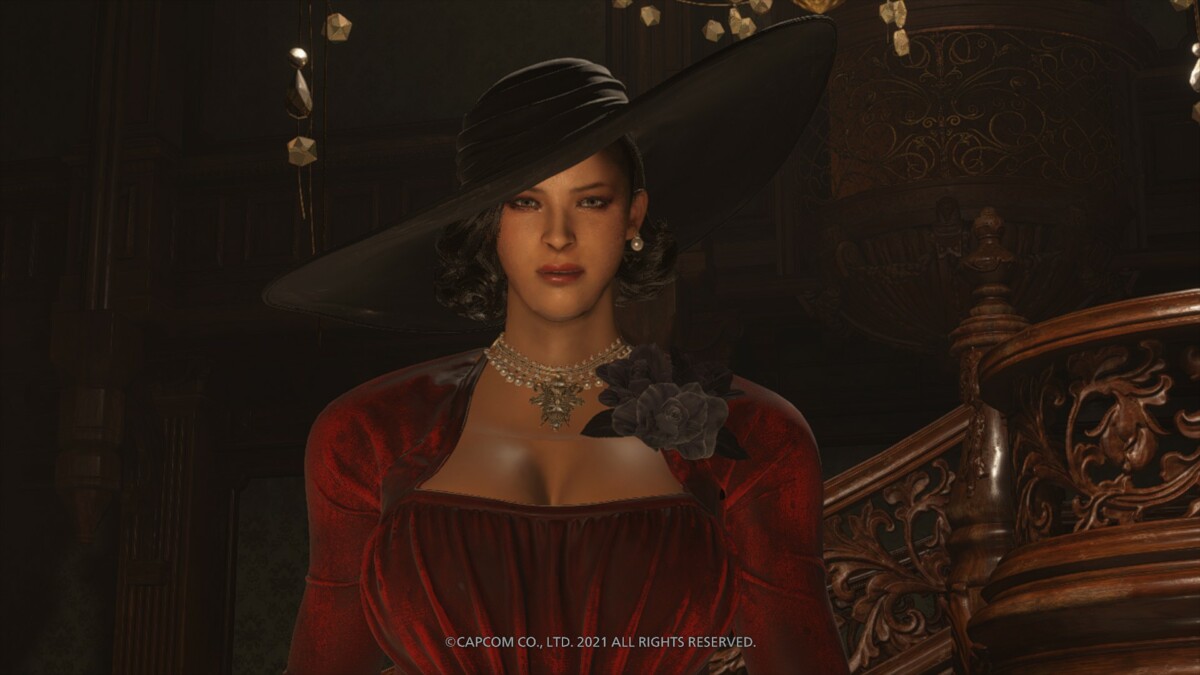 We’re fans of the whole Resident Evil series, like many of you. This mod, like #15, is a way to bring some nostalgia forward into Resident Evil Village.

Lady Wong switches the Dimitrescu matriarch for a super tall version of the femme fatale Ada Wong. Her dress gets dyed a deep crimson, too.

This version of Ada has given up her close-quarters combat and firearms for leisurely skulking and a pair of intimidating metal claws. Lady D, meet Lady W.

It’s a shame Chris Redfield and Lady D never cross paths; this mod could make that moment an RE6 reunion of sorts. 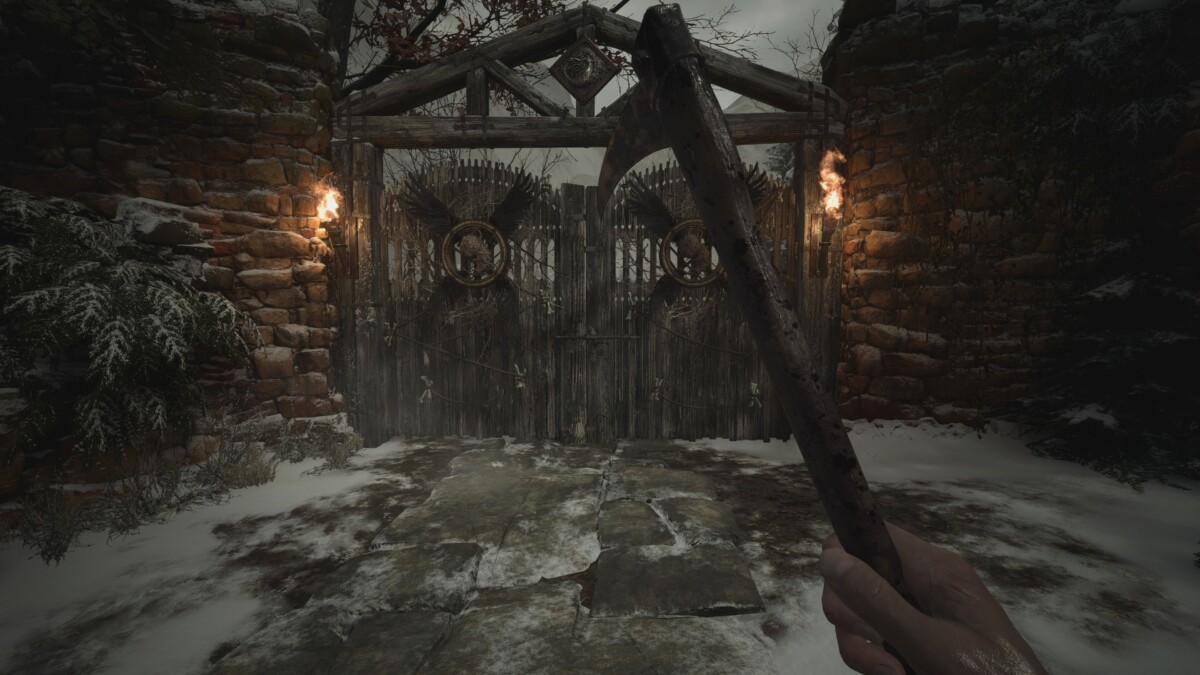 More Melee Weapons lets you swap all of the in-game weapon models with ease. Make Ethan’s knife a chainsaw, make his katana a yard rake; the possibilities are endless.

Players can access harder-to-find weapons like the halberd, ax, and Heisenberg’s own hammer with an easy file swap.

We love combat and are easily entertained here at NerdBear. This mod makes for hours of monster-bashing amusement. The Witch Shotel looks funny in the hands of Ethan Winters. 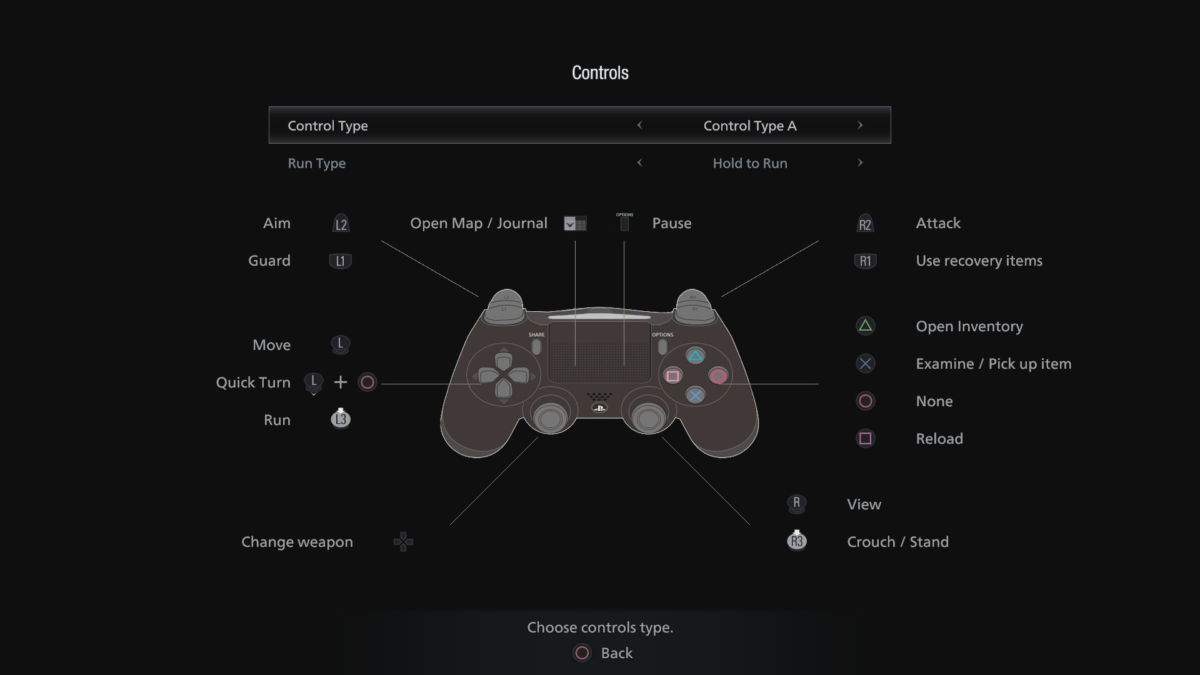 The PS4 Button Mod for Resident Evil Village is a convenient quality of life improvement for those players that plug controllers into their PCs.

Resident Evil purists will attest to the superior experience of a controller vs. a keyboard and mouse. We tend to agree. (But play your way, always.)

This mod is one of the funniest and most surprising mods for Resident Evil Village. Its placement at the top spot on our list is not a joke.

SpongeBob Paintings and Photos takes all of the photos and artwork strewn around the world of RE8 and replaces them with stills and artwork from the first three seasons of the hit TV show set under the sea.

With this mod installed, you’ll be searching for SpongeBob pics everywhere you go whenever you see a picture frame. It even replaces photos in Ethan and Mia’s home in the first 10 minutes of the game.

Bold and Brash belongs in Castle Dimitrescu, besides. Real art.