It’s hard to deny that playing Breath of the Wild felt absolutely incredible back in 2017 and still is today.

Given its massive world, heaps of content, and compelling save the world story that goes far more into the consequences of Ganon winning than the previous games, it’s no wonder people saw this as a compelling reason to get the Nintendo Switch.

Unfortunately, it is only available on the Switch and Wii U officially. You can play the game on a PC using the Emulator, and boy, the modding community, did what they do best, make some mods.

With tons of fun new tools and spells to play with, new dungeons, and enemies, here are our top 21 best BOTW mods. 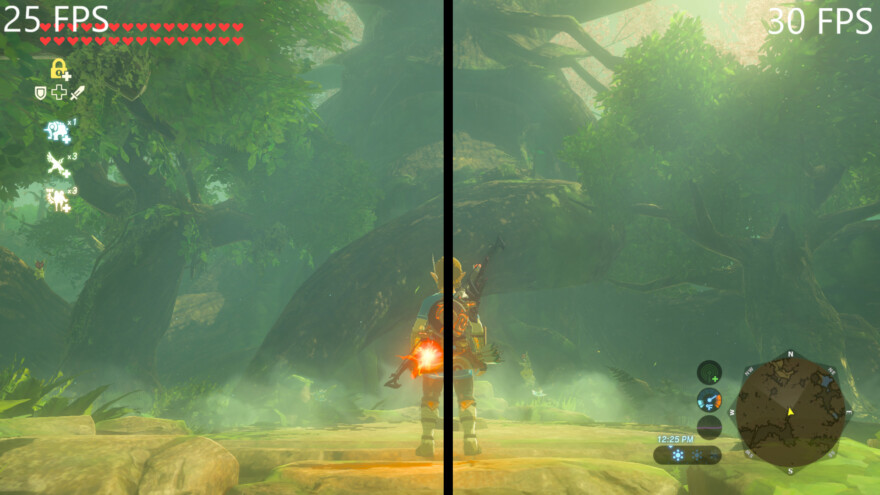 Wii U Console Performance Patch gives a good bump up in performance as the PC emulation for BOTW still has a way to go before really accommodating lower-end PCs. So this is more of a preset in the Emulator itself.

It can also be a baseline to work off what greatly affects performance and what doesn’t if you want to tinker with that more. 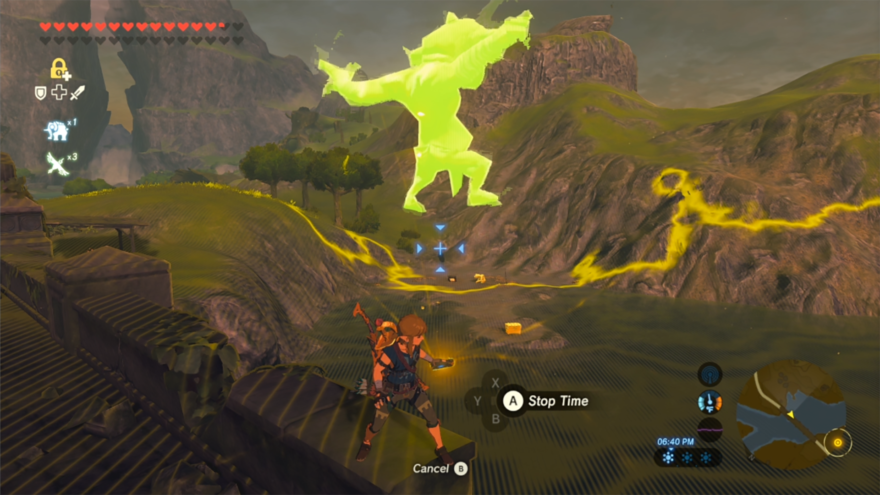 Stasis Enhancement is like an easier, less face full of menus version of a cheat engine. The mod allows you to infinitely use stasis as well as grow, shrink, or kill pretty much everything in the game.

The simple hotkeys are more than enough to rule over the kingdom or wreak havoc from enemies to weapons and any other object that can be directly interacted with. 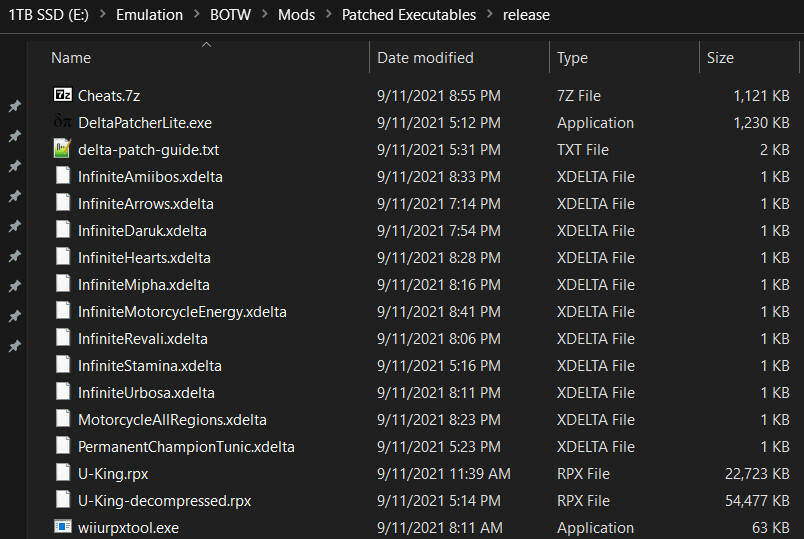 Community Cheats is a collection of several cheats for the game made over the years.

Consider it a one-stop cheats shop. It helps save time and the effort of downloading different mods or searching for cheats. 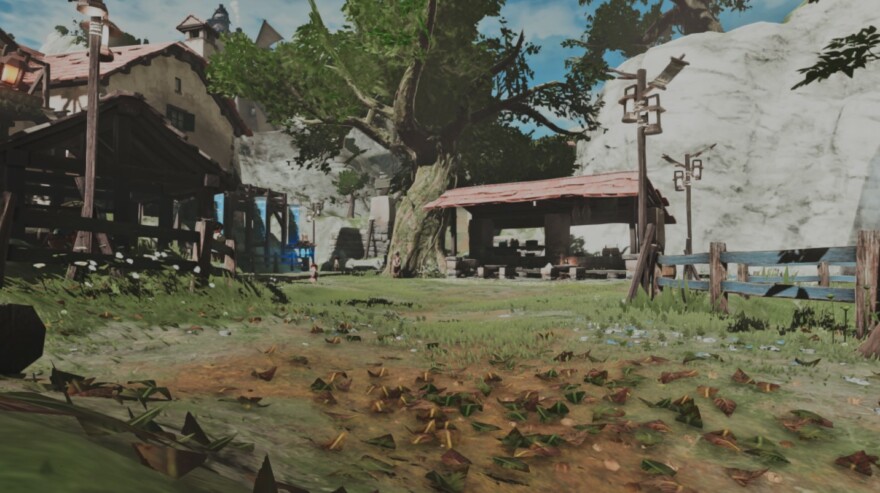 When BOTW was first revealed, the colors wowed everybody with the strong contrast and fantastic lighting that looked fresh. However, some may not enjoy the “into your face” atmosphere.

It does this by making all of the colors a bit warmer, cutting down on the vividness of the colors. There is also a performance mode for any system that might experience any frame drops. 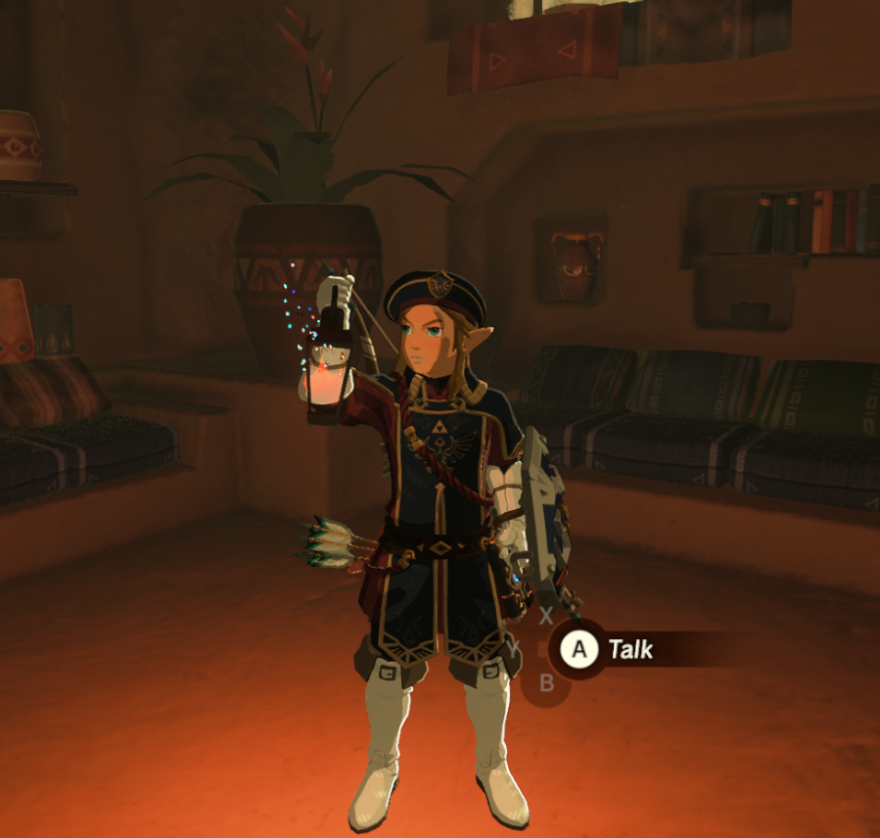 Although there is no playable version of this mod currently, it is in the making, and the information regarding new items, weapons, and enemies will make this one of the best mods to get.

Second Wind Expansion looks to improve the performance of BOTW.

The mod aims to fix several bugs, completely overhaul the game (visuals and gameplay), and add expansions. Changing the mechanics and adding some new ones are also in the works. 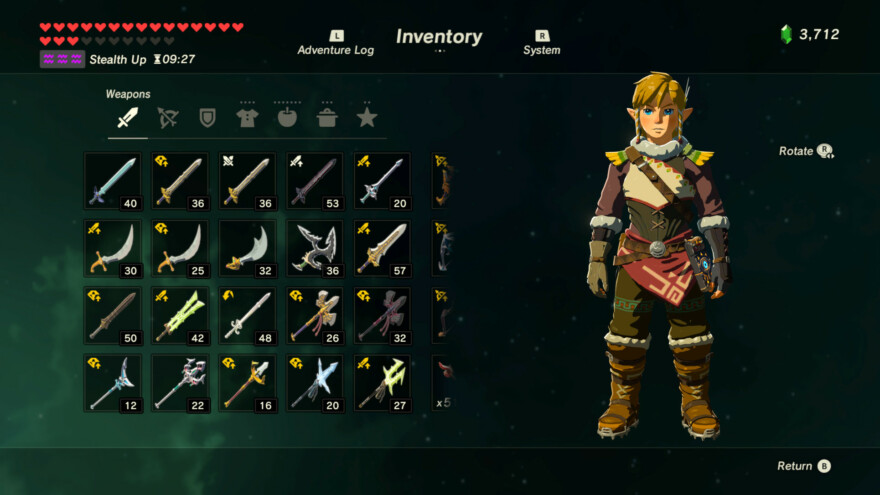 Sometimes progression in the game doesn’t feel right. Those of you that have spent the time getting upgrades know what we’re talking about.

More Upgrades is a mod that slows down the upgrade progression, ensuring that each upgrade tier feels more substantial.

It also adds new tiers to upgrade to level up the current vanilla upgrade tiers.

You thought that was enough, but it doesn’t stop there. The mod buffs existing enemies making each fight difficult. It’s for those looking to get a couple of more hours out of an already incredibly long yet fantastic game. 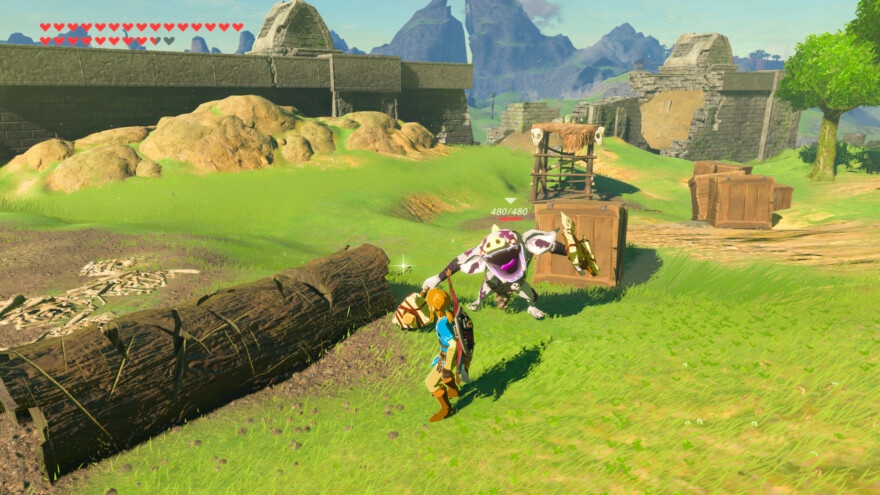 Monsters Adjustments is the exact opposite of More Upgrades, making it easier for gamers to defeat monsters. The mod reduces the HP and attack stats of gold and silver monsters and Lynels too!

For Hinox, it does increase the HP making the monster slightly special compared to the rest. Overall, you won’t feel that the game and fights are a drag and can easily enjoy the story. 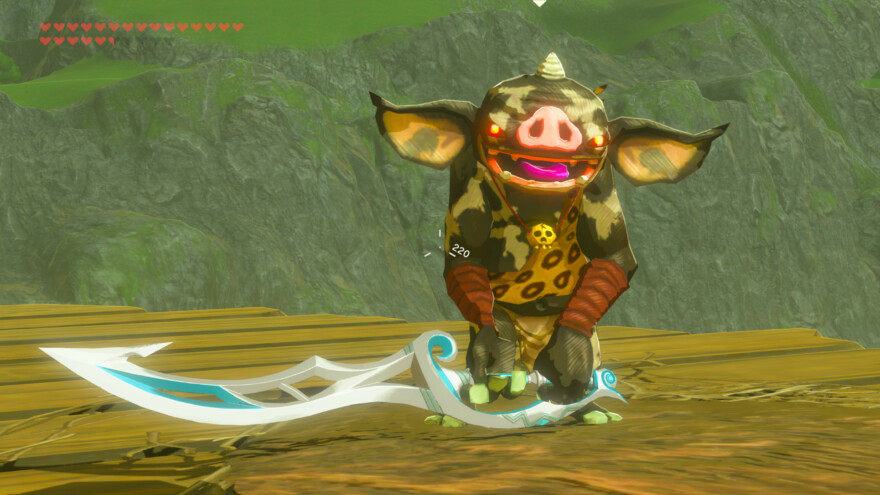 Another monster-altering mod but easily the least intrusive and most immersive one of them all, introducing Monster Weapons Variety.

The mod increases the number of weapons monsters can spawn with.

Yes, it makes the game more interesting yet balanced as it also increases the chances of players stumbling across rare weapons. With harder enemies and more weapons, what else can a gamer desire?! 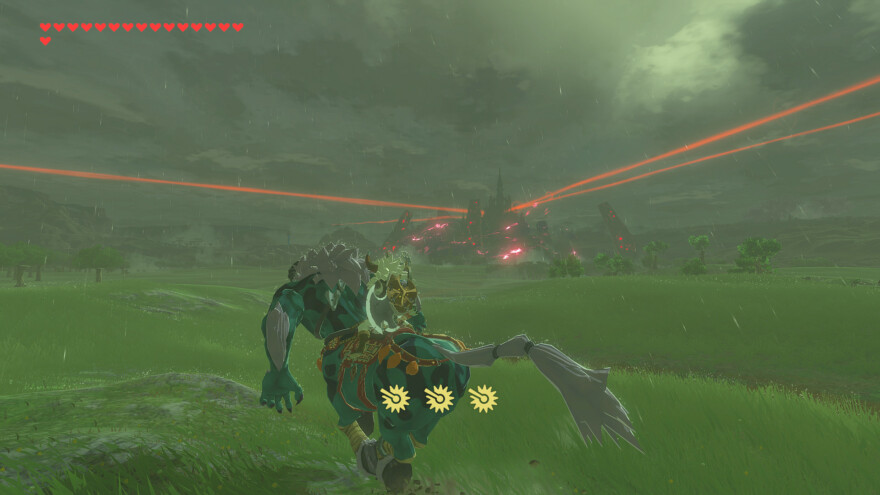 Want to replace your horse with a Lynel? Give Lynel Mount a try, you’re bound to love it.

The mod adds the fearsome centaur in place of your horse, a great way to bulldoze everything that stands in your way.

The animations, however, on this might feel a bit shaky, but the mod does work pretty well, and it’s a lot of fun. 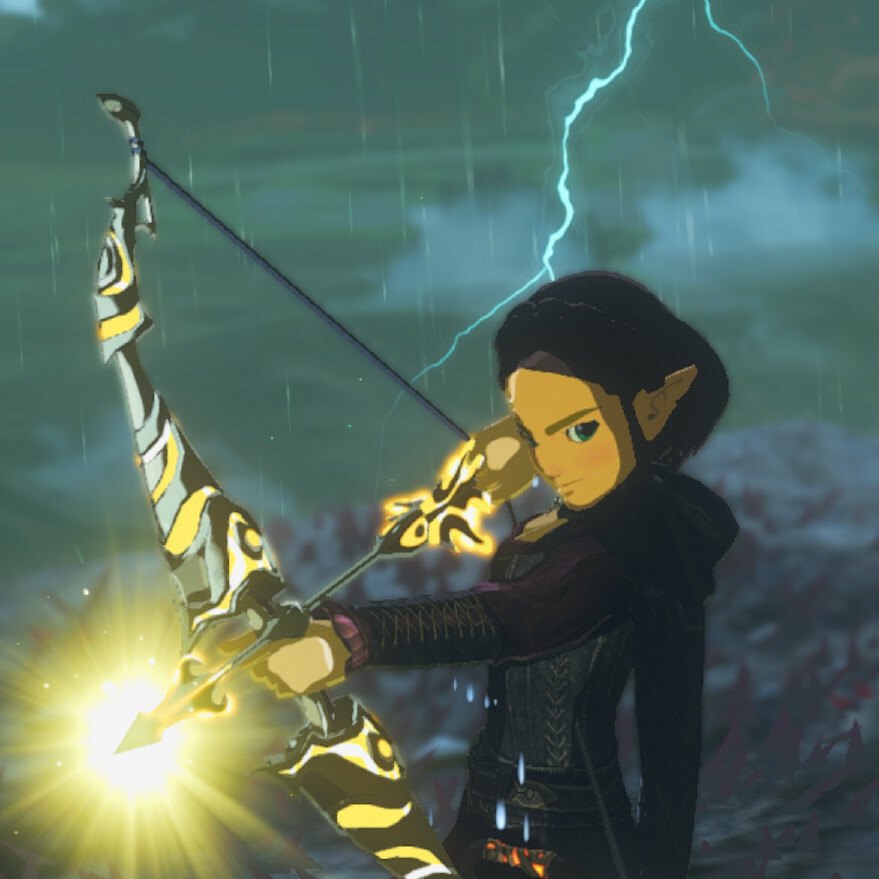 An outfit replacement for the Phantom Ganon Set, the Serana Outfit copies the look of Serana from TES V: Skyrim. It is meant for when you’re playing Zelda or Linkle.

We chose this mod because it’s a stepping stone for those looking to try armor mods, and trust us, there are tons of those! You can either stick with this or explore different armor sets that may suit your character better. 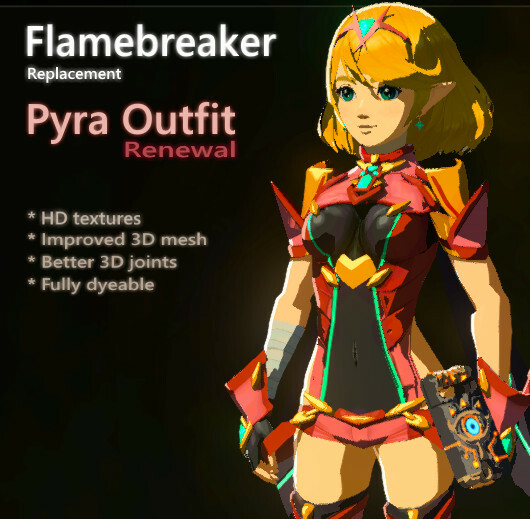 By now, you must have realized our love for outfit mods. Pyra Outfit is another outfit mod worth mentioning on this list. This time the outfit is based on Pyra from the Xenoblade series and is tied to the Flamebreaker set of armor.

There are 7 recolors available for the outfit to choose from, and the completely new physics will captivate you.

Although the new physics are not present for Zelda, they are available for Linkle. Don’t worry about Zelda as the mod is still under development, and there is news that the physics on Zelda is in the making. 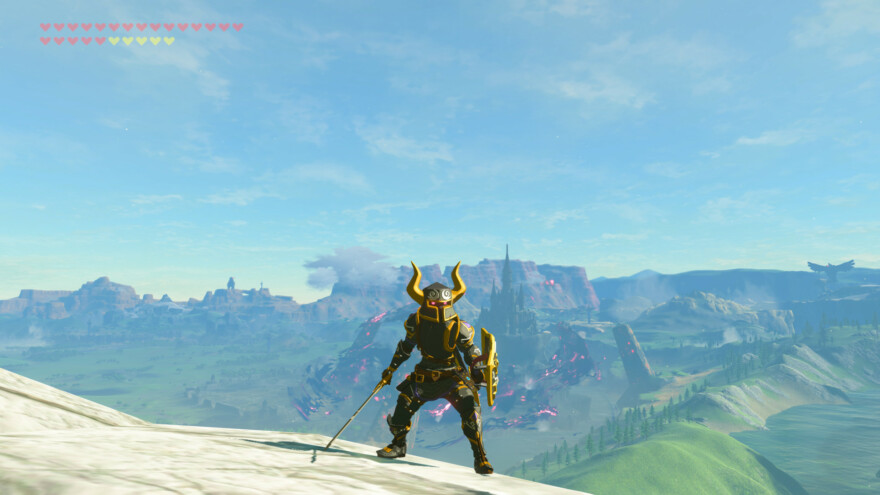 A replacement for the Phantom Armor set that is more thematically consistent than the base game’s version. Phantom Knight Revamped armor set has a more menacing and cleaner-looking feel than its original version.

The unique design and the textures are the highlights of this armor set. It is also available in all the different colors with many customizable options. 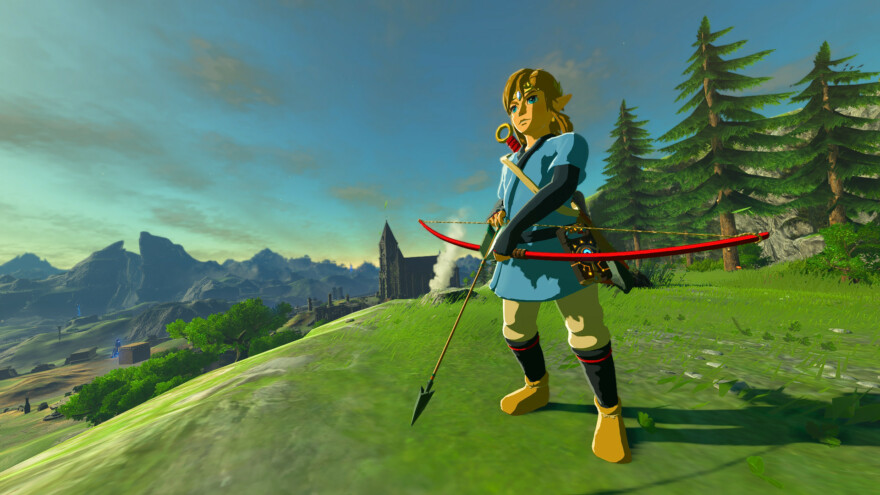 Ashitaka’s Outfit and Weapons is a mod that introduces a new set of armors that emulate the look of Chihiro and Haku from Spirited Away. You even get different sets of weapons with this mod.

It’s pretty much a full set of armor and weapons with 2 recolors that match Spirited Away characters in one mod.

There is also a hooded version for all outfits if that’s your thing. 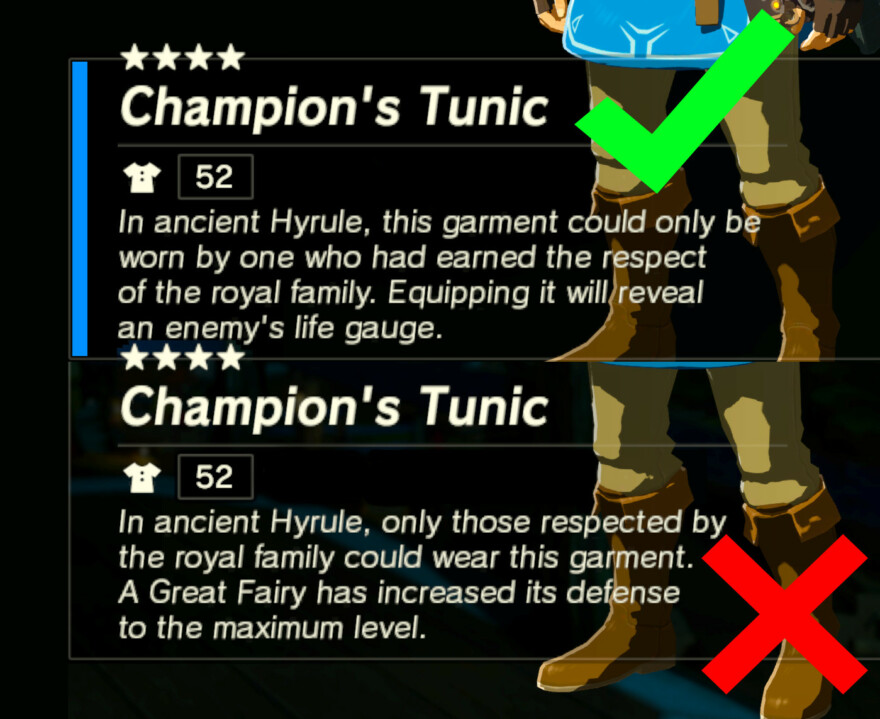 The armor descriptions may seem long, but they sure are interesting. As the game progresses and players make upgrades, the description gets boring, short, and simply contains useless information.

No one wants to know how many times your armor has gotten an upgrade when players can simply see the stars.

Armor Descriptions retains the original item description even after the upgrades. Players can also get the version where it complements the Armor Revamp mod by adding the description for Amber Earrings. 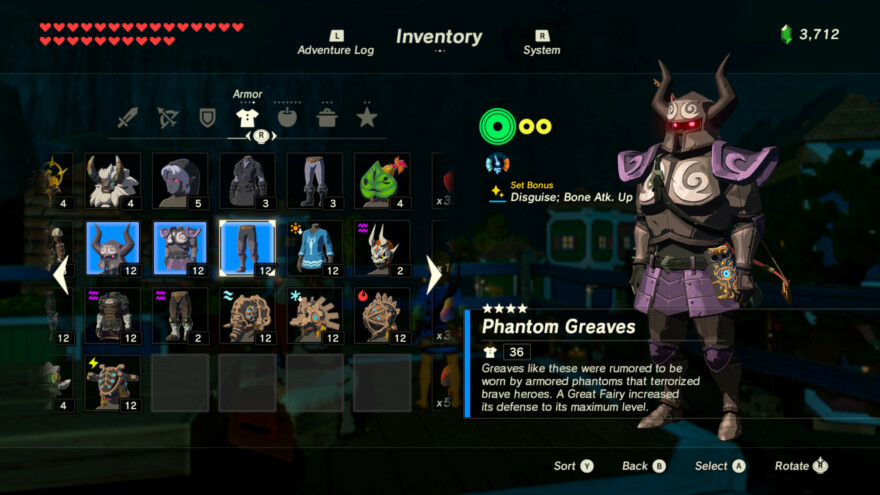 A complete rebalance of all the armors that are available in BOTW, Armor Revamp aims to make armor more unique to their respective tiers.

It does this by making each specialized armor lean more into those stats and generally lowering the stats of all 4-star armors.

As gamers progress in the game, the stats on their armors increase, overpowering their characters. This can make the game easy and less challenging, taking the fun out of it.

The idea behind this mod is to ensure that players use the right armor for the battles, as each armor has its own buffs while making fights difficult due to lowered stats.

Armor Revamp is a great way to take some time out to strategize the game and get better at it. If you’re up for a challenge, get this mod! 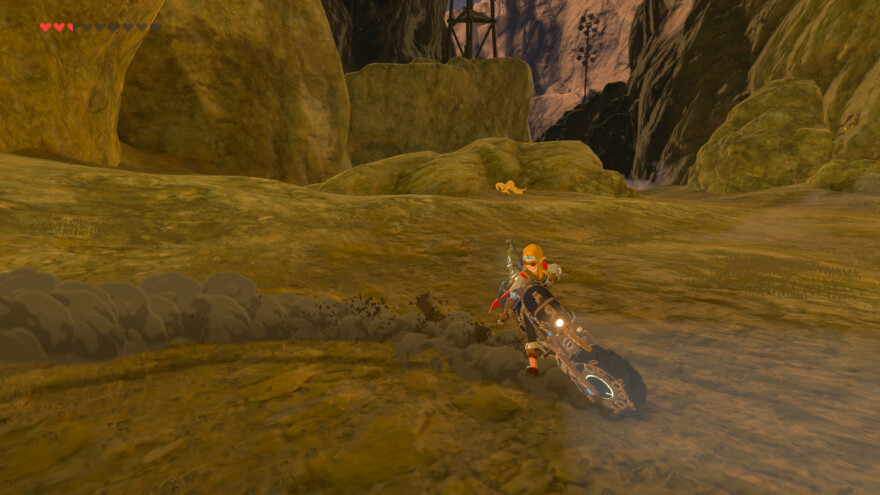 The Mad Mastere’d Motorcycle Mod gets the game’s motorcycle, which was already heaps of fun, and makes it more useful while also making it even more fun to drive around the place.

Changing pretty much every aspect of it, the mod plays around with the handling, the physics, the weight, improved drifting, and speeding up animations allowing gamers to go fast and take the motorcycle anywhere they want.

The motorcycle also has enhanced mobility allowing it to whizz through rugged terrain and overcome massive lakes.

It removes the cooldown periods on the motorcycle and improves fuel efficiency allowing for a whole 30 minutes of non-stop madness. 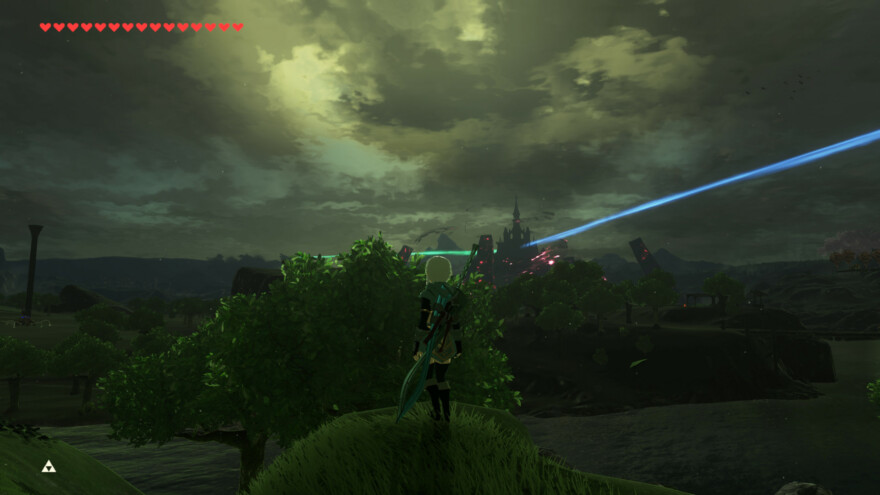 A complete revamp of the death system in BOTW, Dark Souls Bonfires takes a good amount of influence from Dark Souls.

The mod ensures that players respawn at a bonfire, but in doing so, it also resets the enemies.

The best part about the mod is that you get refillable health items every time you visit and stop at a bonfire. So although there is blood moon at every respawn, you do get some potent potions to gulp down on! 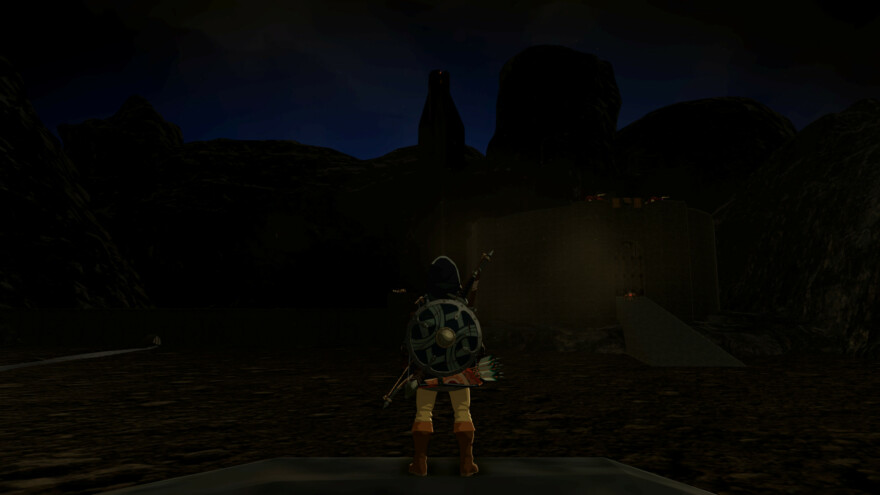 Although the enemies found within are still the same and there is no new loot, the complete recreation of Helm’s Deep is incredible and mesmerizing to witness in such an open-world RPG game.

However, there is one problem with this mod, which is that the spirit orb is unavailable when enabled.

So to get it, you have to disable the mod and run through the dungeon normally, after which you can enable the Helm’s Deep version and play without any problems.

It’s certainly a fair price to pay as you get a glimpse of the world of Arda. 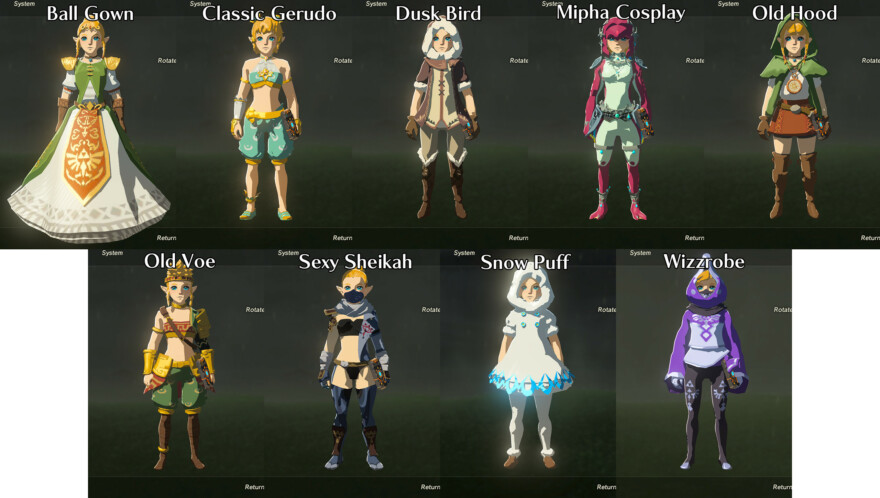 Many gamers prefer the female version of Link in Hyrule Warriors and this mod is to please those fanboys.

Linkle Mod replaces all the sounds and outfits of Link with the ones in Hyrule Warriors.

The mod comes with redesigned outfits and even action sounds, delivering a completely different Link in the Breath of the Wild. 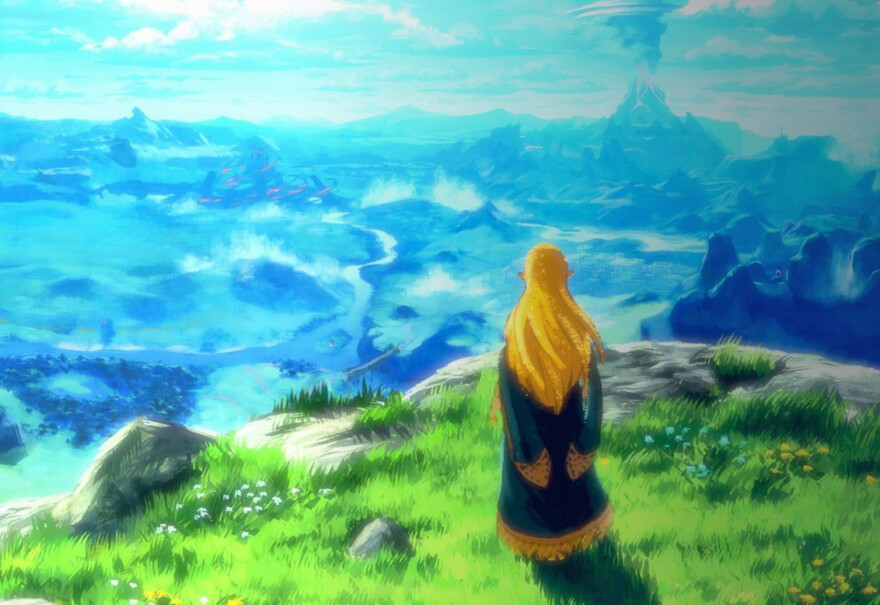 Zelda’s Ballad allows you to play as Zelda with several new and unique weapons and armors.

In addition, the mod has a fully voiced Zelda replacing Link’s voice when performing different actions.

There are even custom animations and physics for the playable Zelda. The mod was made in honor of the passing of the modder’s mum passing away before she could play BOTW.

Truly a labor of love that deserves to be appreciated and on our list. 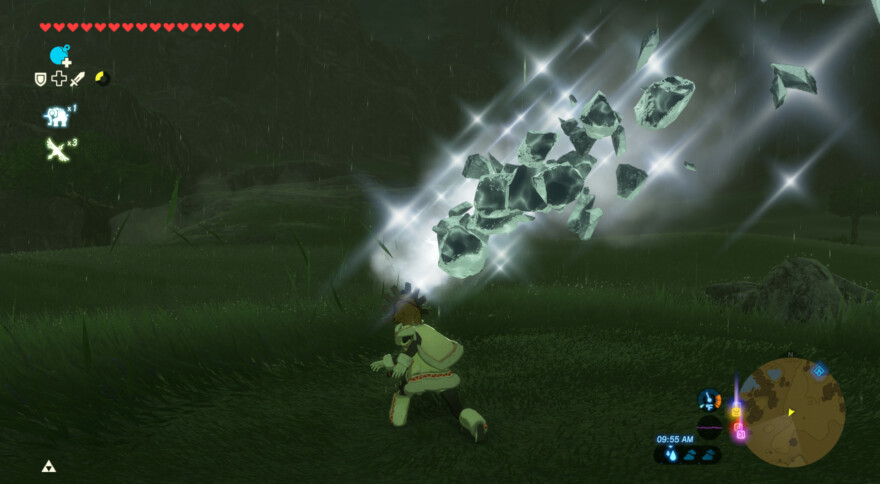 This mod aims to be a massive new addition to BOTW. Apocalypse Spell Package acts as a DLC on its own by holding so much new and creative content to the game.

Spells from Dark Souls, Skyrim, Genshin Impact, and more will encaptivate you as you spread madness across the kingdom.

The spells are categorized for easy use, and players can choose between Pyromancy, Cryomancy, Electromancy, and many more.

Breath fire or subdue your enemies with electric shields or simply raise the dead and induce fear in your enemies.

This project deserves a lot of recognition and is a number one spot on our list!