Pathfinder is our preferred tabletop RPG, so naturally, we are huge fans of the games it has spawned. (Or was inspired by!)

Pathfinder: WotR, developed by Owlcat Games, is among the most recent additions to the range of games related to Paizo’s RPG.

The strategic, turn-based isometric gameplay is a refreshing throwback while also being updated for gamers of the 2020s.

This game’s aesthetic and story are masterful examples of the high-fantasy genre.

As huge fans of Pathfinder: Kingmaker, we were excited about Wrath of the Righteous. It lived up to our expectations.

Best Mods for Wrath of the Righteous

Our list includes the best visual adjustments, quality of life improvements, and additional content that we think push the game closer to perfect.

We tried to avoid low-impact mods like portrait packs and custom portraits, but if those sound interesting, they are easy enough to seek out. 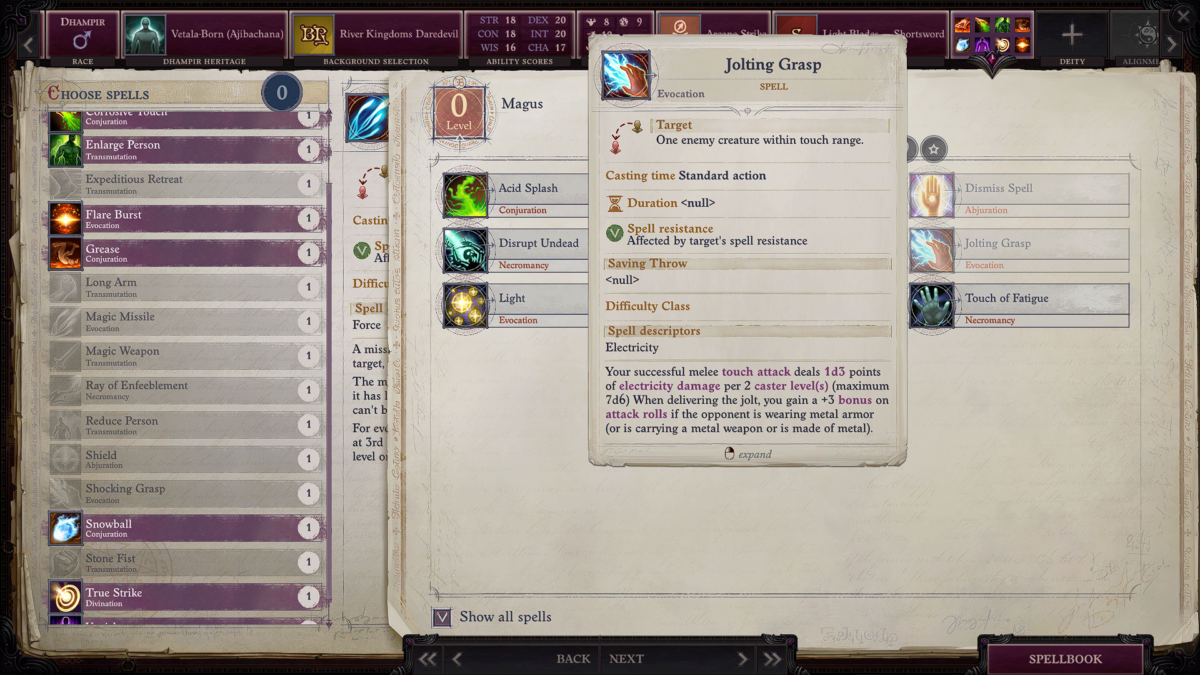 This mod may bring D&D elements to Pathfinder, but if you don’t tell, we won’t. The result is worth the sacrilege.

This adjustment is more than fair because all damage cantrips will still be less powerful and accurate than magic missile. It is disappointing to have cantrips that remain as useful as they were at level one for your entire adventure.

Using the Unity Mod Manager*, players can customize how quickly and how high the cantrip spells scale. We prefer to make them scale more slowly and cap them lower.

*Many mods will either require this or be much easier to set up if you have it. 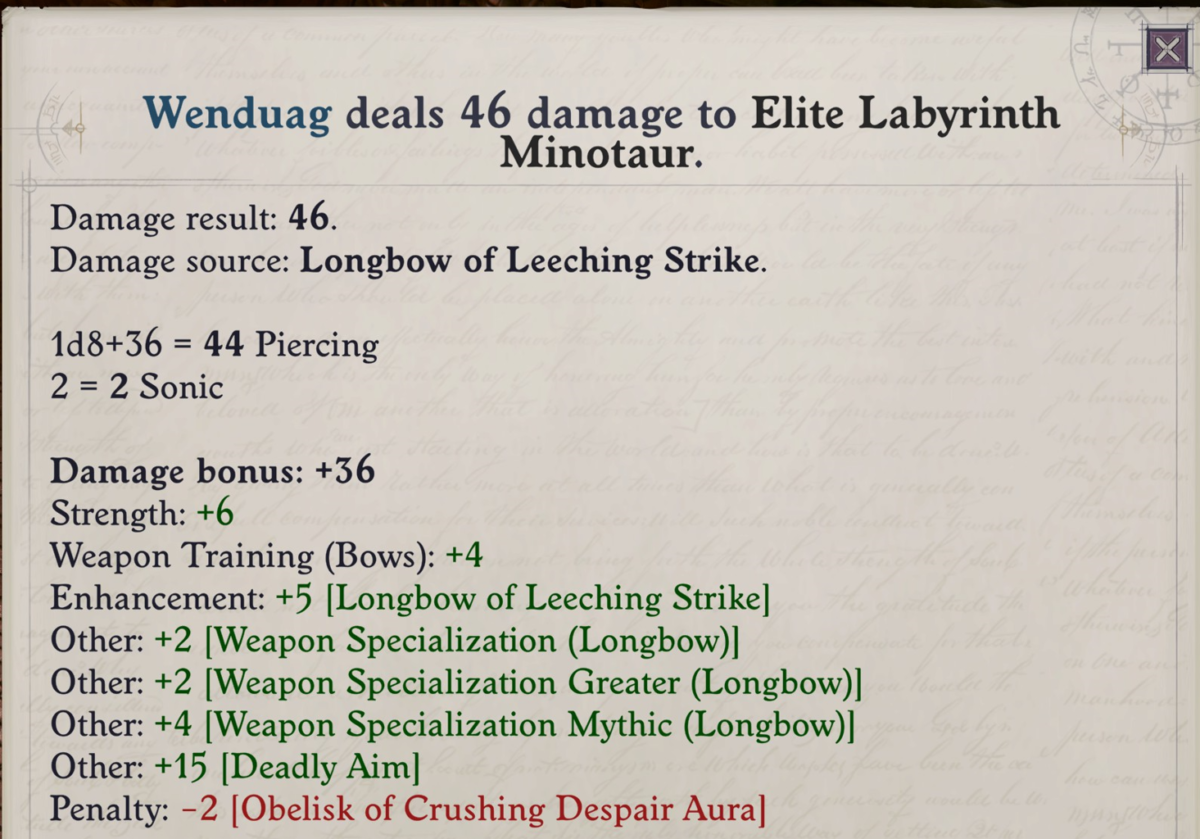 Damage Breakdown gives a veritable treasure trove of detailed information to accompany damage dealt to or by your characters.

Pathfinder: Wrath of the Righteous already shows similar information for attack, armor, and saving throw rolls and their bonuses; adding damage breakdowns is a natural next step.

It is a quintessential quality of life increase because of the insight into combat it grants the player. 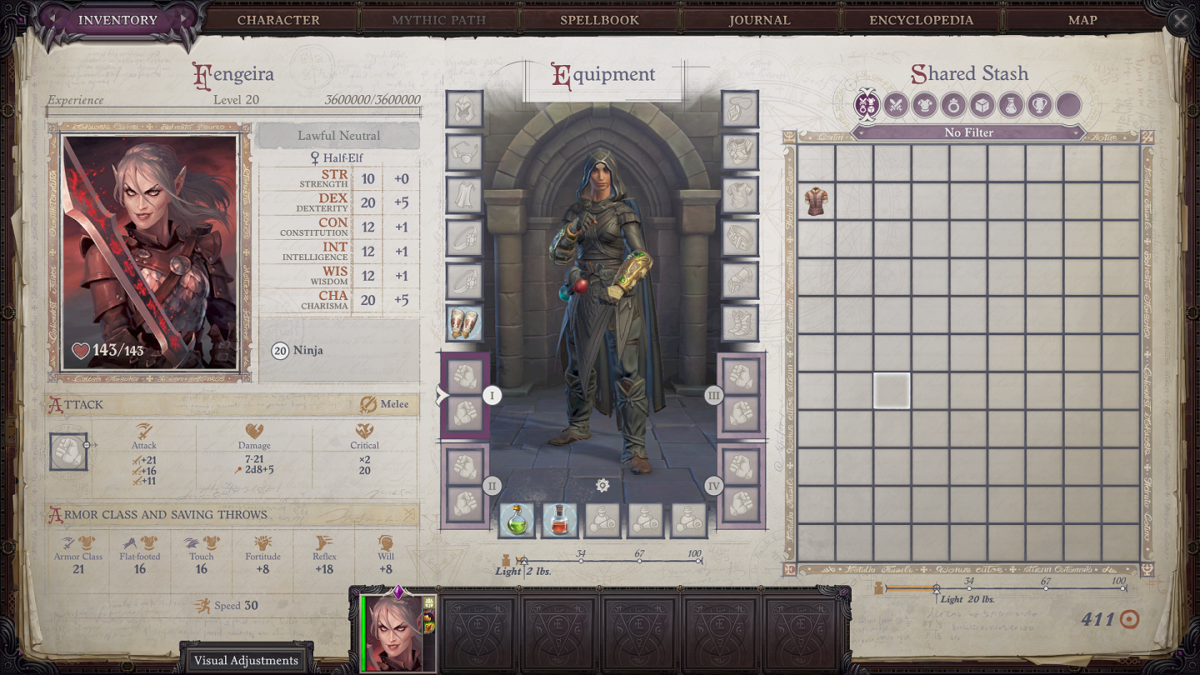 This mod adds the Unchained version of the Ninja class from the Pathfinder tabletop RPG. This class appears in the second Blood and Steel book.

Not all Pathfinder classes make it into the video games, so the modding community steps in to fill the gap. One can never have too many adventure paths.

The ninja functions like a rogue, with a novel emphasis on magic and differing weapon focus types. Like the rogue, they employ sneak attacks and subterfuge to assassinate their adversaries. 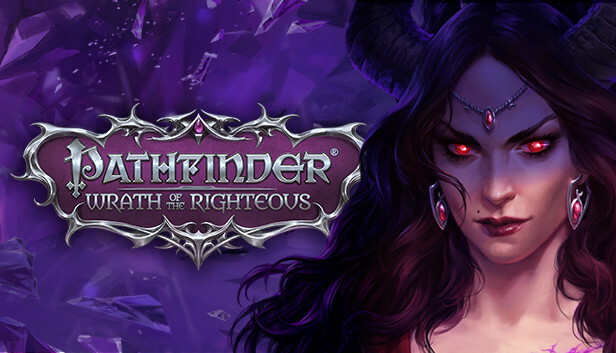 The save files for WotR can balloon to unreasonable sizes caused by extraneous corpses and unclaimed loot left in the environment.

We appreciate the attention to detail, but we’re not sure this level of precision is helpful.

Cleaner adds a “Clean” button to the loot window that removes all of the drops and fallen enemies from the scene, shrinking your save file.

It also prunes unnecessary NPCs like animals and random citizens.

This is a small but elegant quality of life increase, but if you’ve got space to spare, you can afford to skip this one. 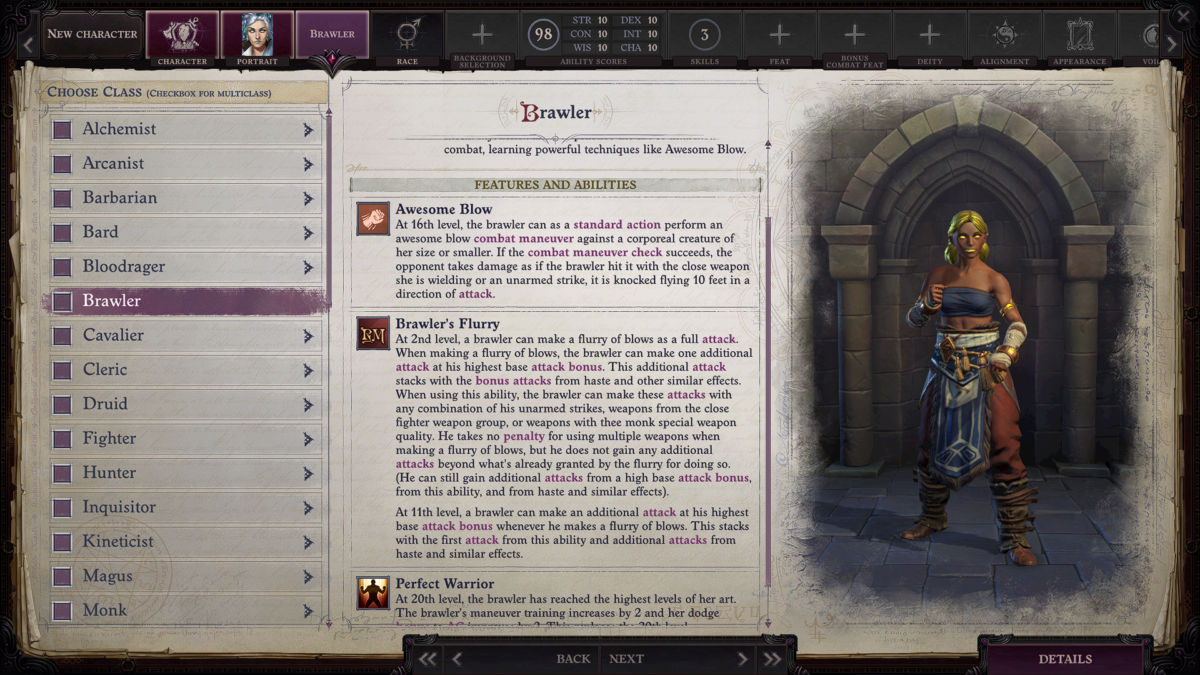 Another additional character class, this mod contains one of our favorites.

Brawler Class adds the Brawler from Call of the Wild for Pathfinder: Kingmaker along with its archetypes. The brawler is a tough-as-nails fighter who doesn’t have time for fancy techniques or finessed weapon training.

Wielding abilities like Venomous Fist and Steel-Breaker, the brawler is an expert in close-quarters combat and exploiting weaknesses.

As a Brawler, no beast is a match for your bare hands. 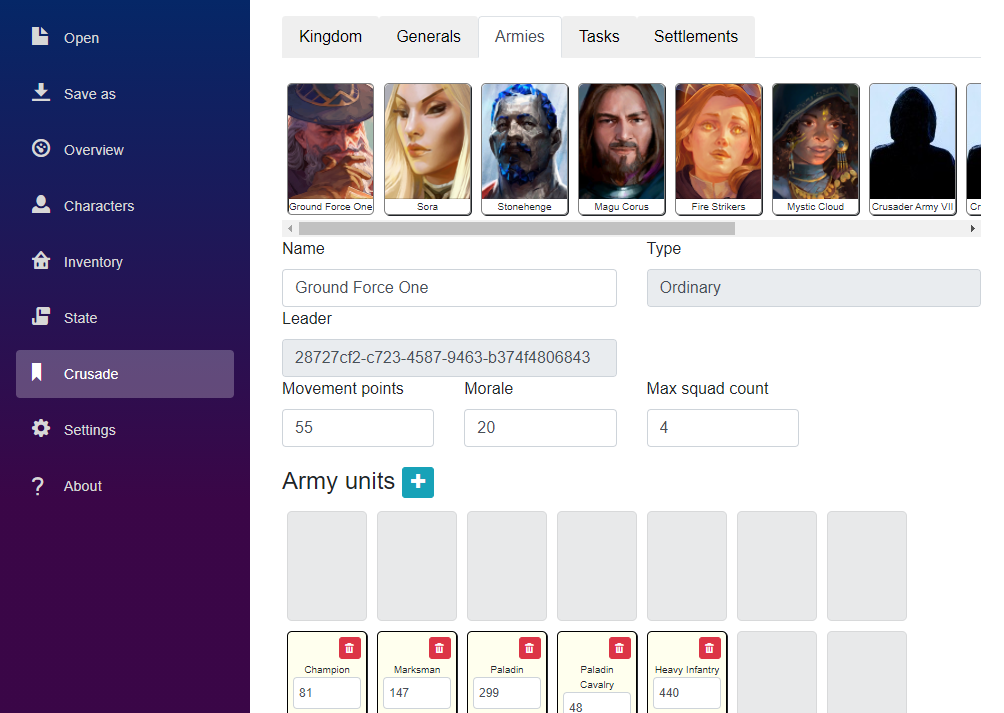 A typical, comprehensive editor for Pathfinder: Wrath of the Righteous.

Arcemi Save Editor lets you change details in your game’s save files directly.

Every aspect of the game state can be manipulated. Time played, money, character names, level, attributes, skills, appearance, inventory, and much more.

Players can also edit the kingdom, shaping the world to suit their equally customized character saves. 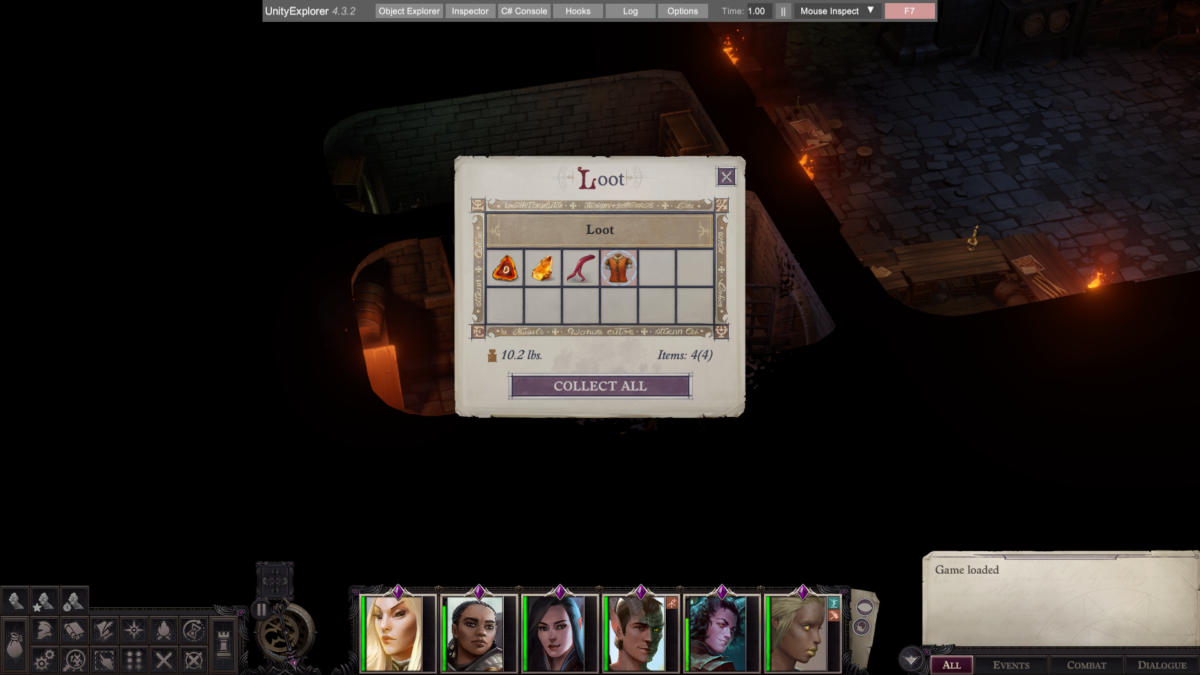 If you’ve read our lists for some other RPG game mods, you’ll know we like any mod that adds further replayability and interest.

RandomEquipment injects a fresh thrill into trash loot. This mod adds the chance of receiving a piece of equipment from loot containers.

The items this mod creates are made to suit the party’s level. It never duplicates items; all drops are unique. Every drop will be worth a minimum of 1000 GP, no garbage. 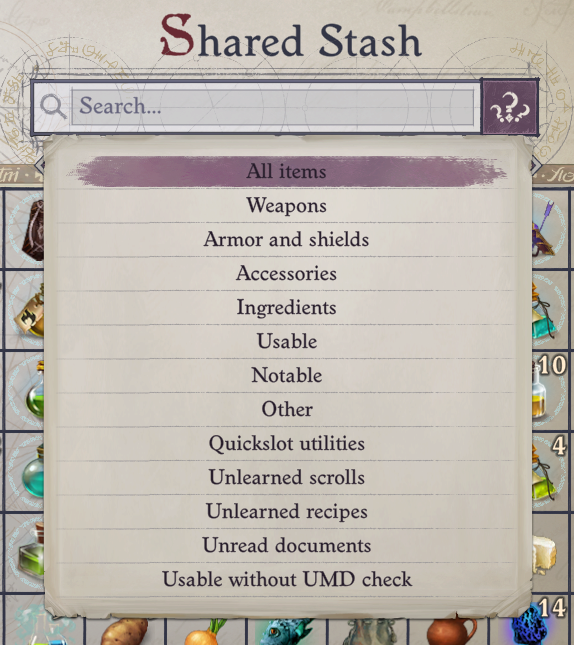 Inventory management feels like 30% of the experience of most RPG games. This mod overhauls this critical aspect of Wrath of the Righteous.

Enhanced Inventory enhances the inventory experience by adding quality of life features like a search bar, filters, and sorting.

These additions alleviate any friction players have felt with the base game’s inventory mechanics. We consider this mod required for a terrific playthrough. 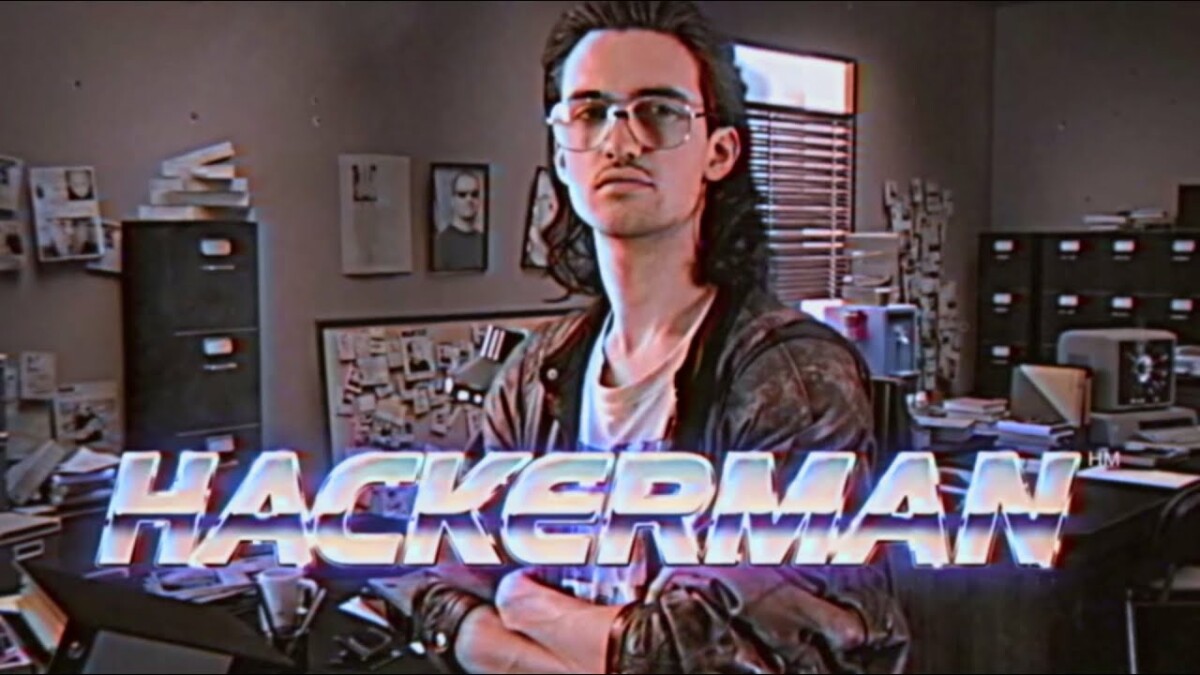 We don’t think players should be denied achievements as punishment for a few mods, especially if they aren’t substantial advantage-granting cheats.

Allow Modded Achievements disables the game’s ability to track mods, allowing you to gain achievements on a modded installation.

We encourage players to use this judiciously; consider saving this mod for a save file you didn’t gas up with an editor or cheats. 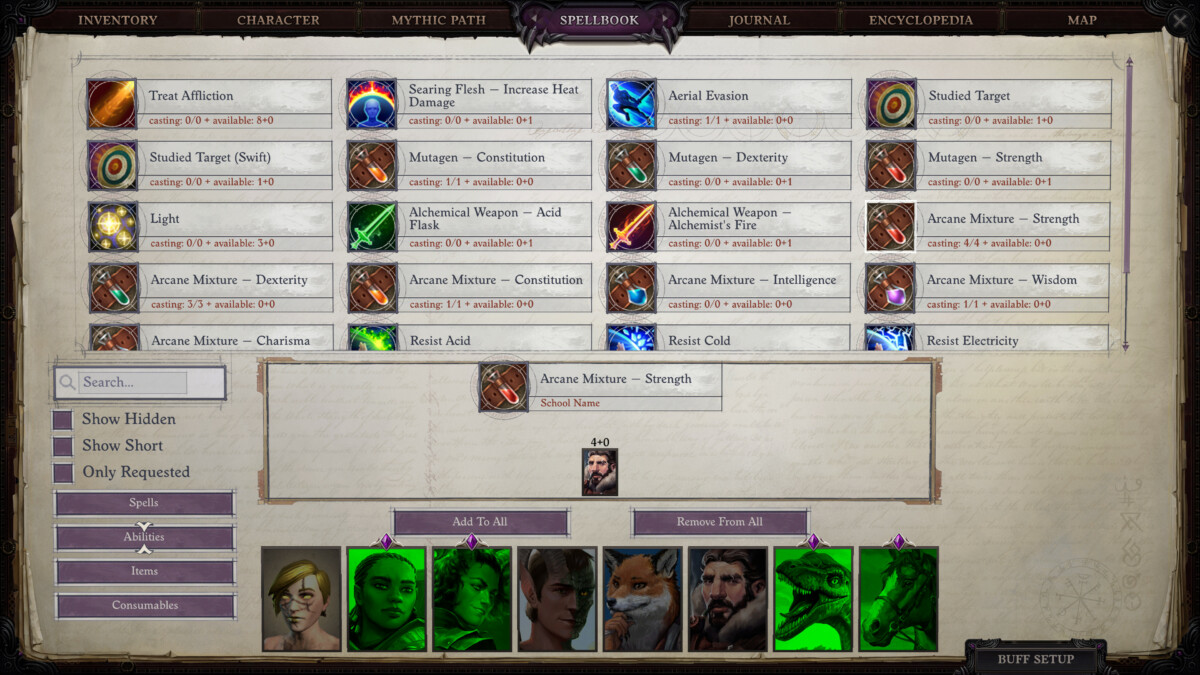 This mod takes the top placement because we can’t imagine playing the game without it after using it. We probably wouldn’t consider it.

Bubbles Buff Bot is an easy-to-use mod that automates routine buffs, so the player doesn’t need to remember to recast them repeatedly.

You can have the best strategy in the world, but having a buff recast slip your mind can trash the whole battle. That’s not skill; that’s forgetting a chore.

With Bubbles, you can create rules for each individual party member’s casting habits. Tell them to cast what, when, and on whom. This is the easiest-to-use automation mod around.