Developed by Techland, Dying Light is a combat-filled, parkour survival action zombie game that hits all the right buttons.

This game is one of our absolute favorites because of the way it combines familiar tropes of war FPS games and zombie survival games.

We’ve picked our favorite mods for the game Dying Light based on either how big of a user-friendliness upgrade they are or how much fun and replayability they add. 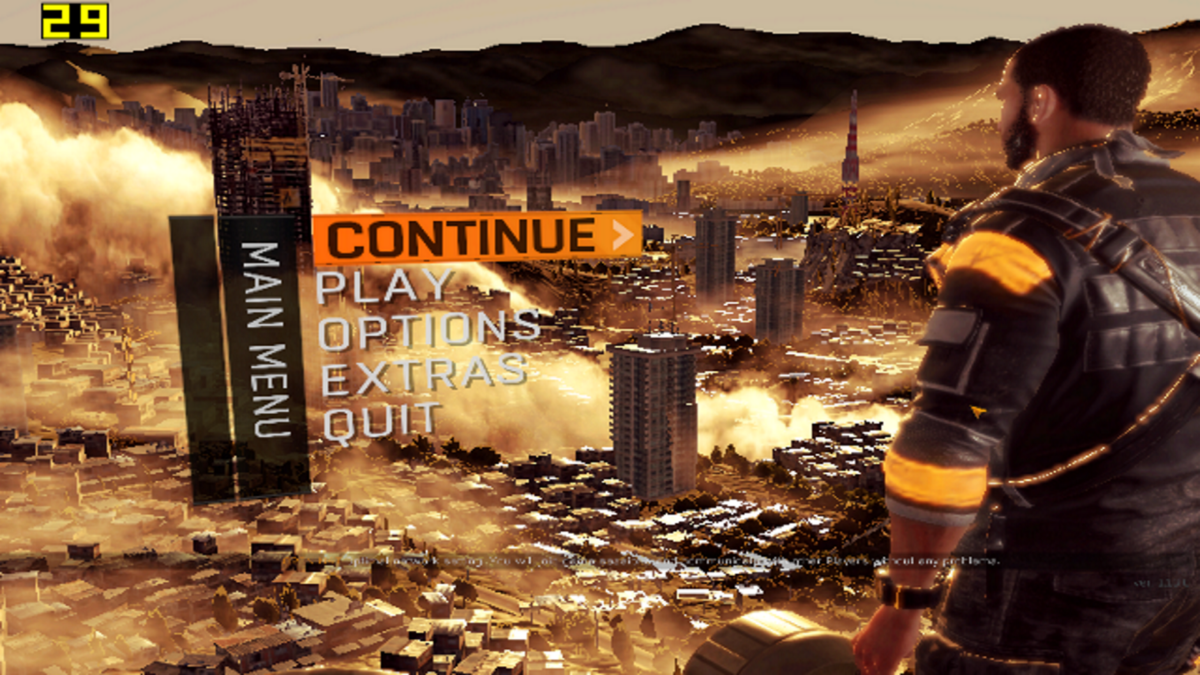 FPS Tweaks will improve your lower-powered computer’s performance by about 10-20 frames per second. We love mods that make our favorite games more accessible.

This mod goes further than other fps boosting mods. In addition to removing film grain and shadows, this mod affects the clouds, dust particles, motion blur, and more.

The resulting upgrade is astounding for a single, easy download. 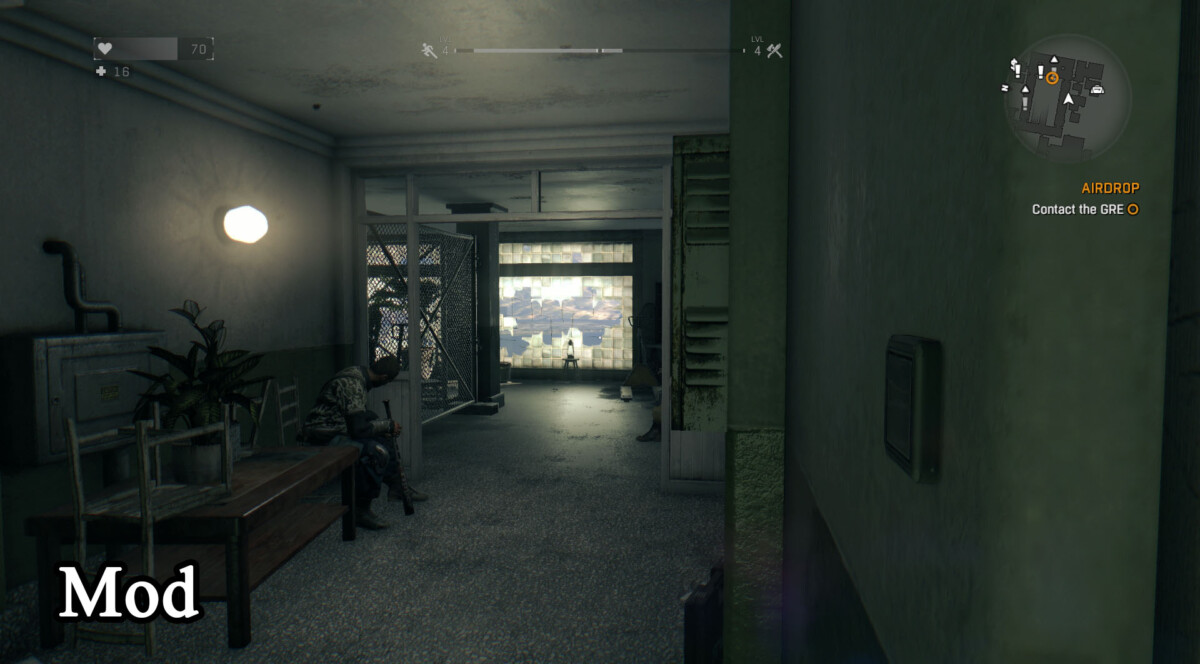 Dying Light’s over-lit, heavily color-shifted aesthetic is one of our favorite things about it, but that’s not every player’s favorite.

For those that prefer a more muted, real-feeling color and lighting experience, this mod offers just that.

It reigns in the lighting system, the blur, and depth of field effects and removes the film grain. 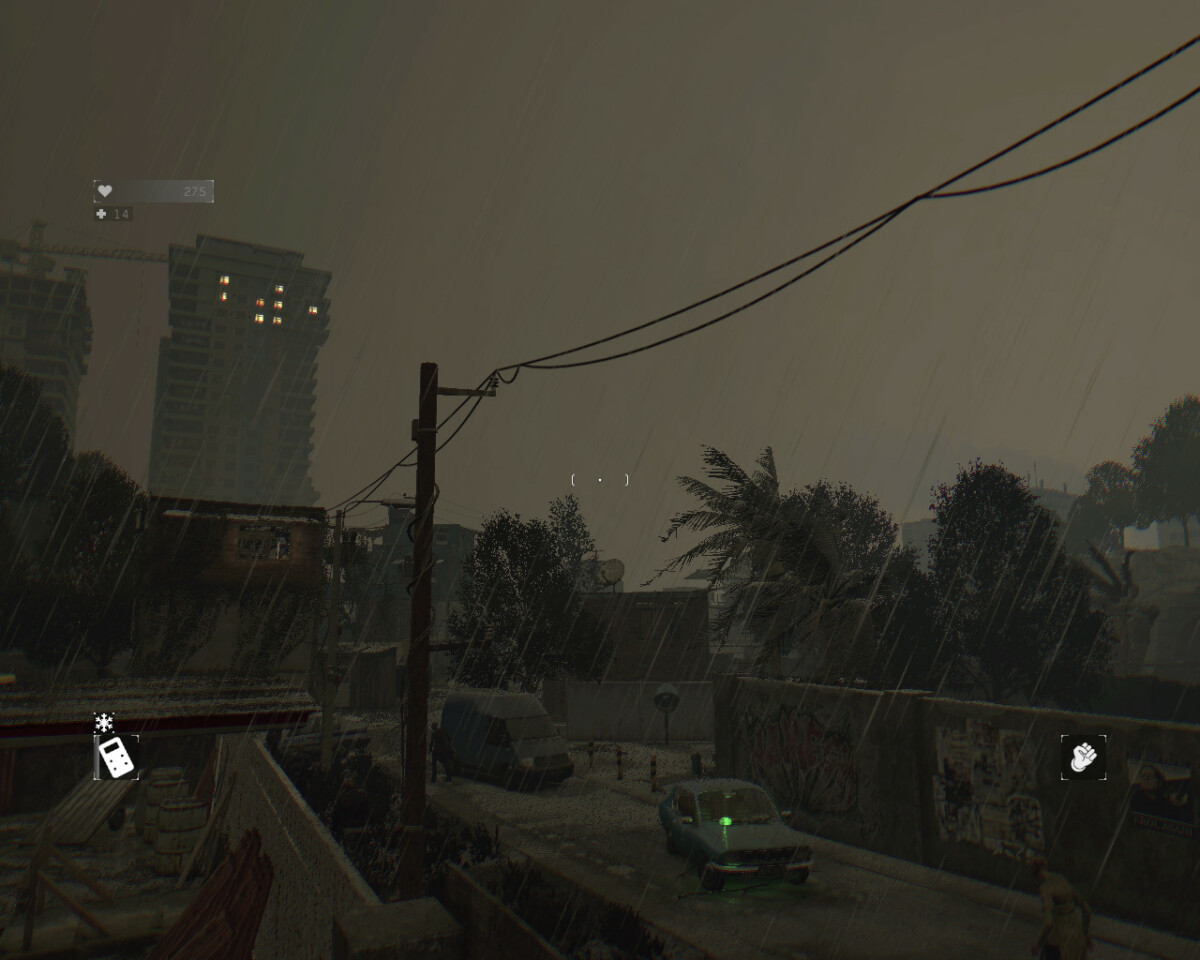 All Climates mod for Dying Light makes the world feel more alive by allowing all weathers to appear in any part of the day/night cycle. This mod adds 12 different climates, too.

This is a humble mod that packs an immersive punch.

With the new dynamic weather system introduced with this mod, players can experience weather that changes throughout the day and night.

It doesn’t just rain at night in the real world; why should it in the zombie-infested city of Harran? 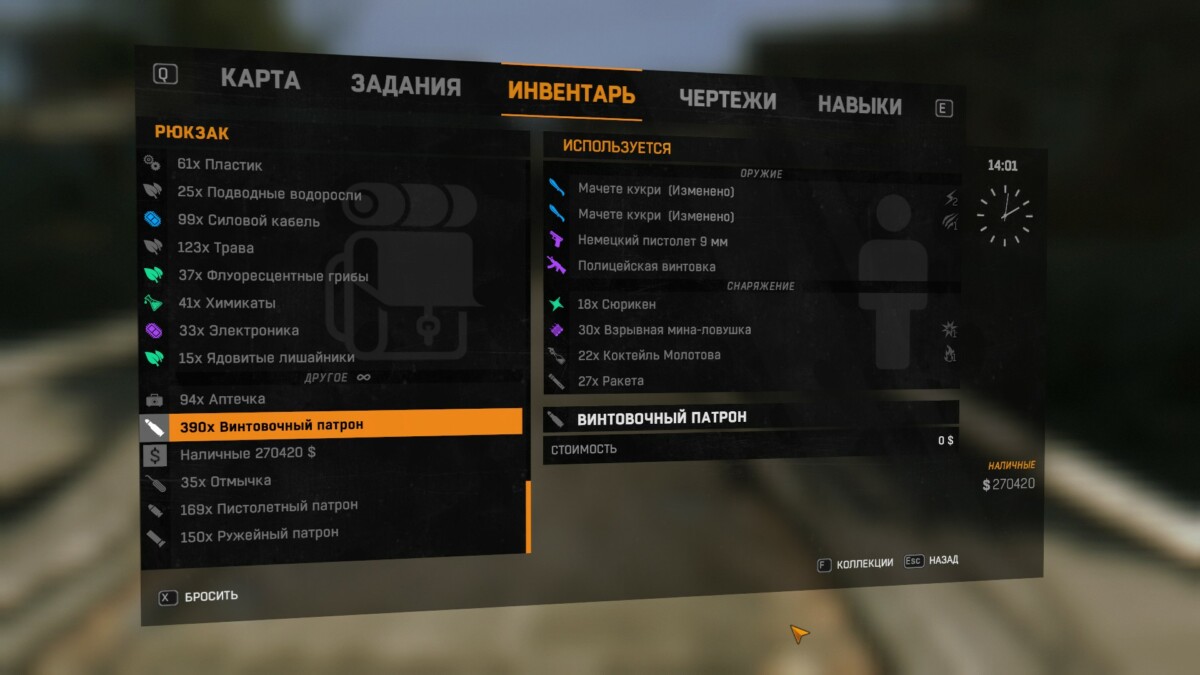 Backpack Expanded increases the maximum capacity of the backpack and rounds inventory for pistols, assault rifles, and shotgun slugs.

One of our gaming pet peeves is inventory management. We don’t think it’s fun or adds anything to our experience, especially in single-player games.

This mod grows your inventory potential to its largest without having to worry about getting the upgrades and storing other items in the meantime. 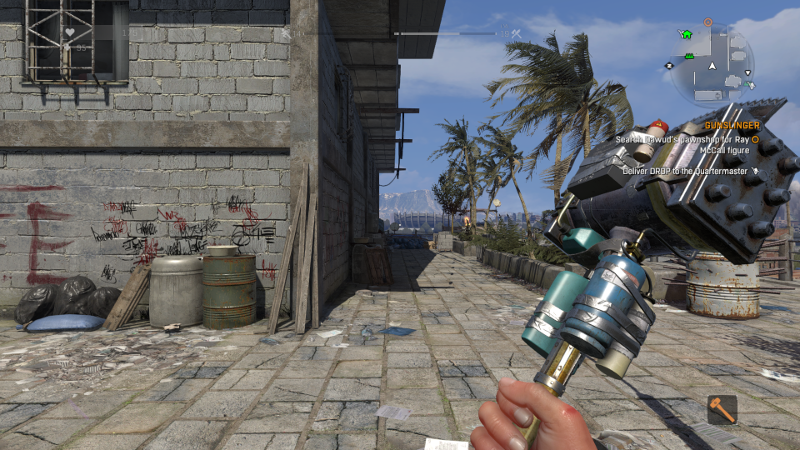 In the open world of Dying Light, one cannot have too many weapons at their disposal.

Bear Arms Weapons Mod is a custom weapon pack that contains 22 new weapons for the player to use against the zombies.

The biggest hits of this pack include two new shotguns, melee weapon versions of throwable weapons, and more to discover.

Bear Arms stashes these weapons in the standard shop rotations; keep an eye out if you’re in need of better base damage.

There are never enough weapons in any game, it seems. Modders always come to the rescue, offering players more tools of the trade. 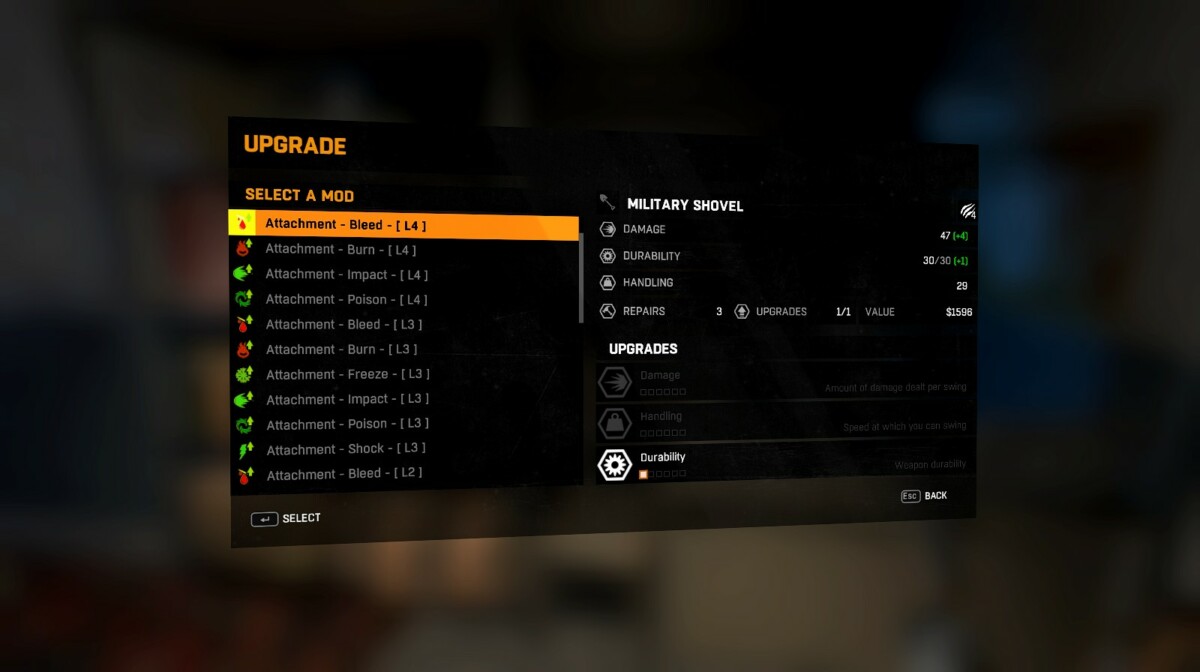 Custom Weapon Upgrades adds a modded blueprint for a variety of elemental attachments that allows the player to add any level of elemental effect to any melee weapon’s upgrade slots.

Once installed, the custom blueprint should be at the top of the Blueprints menu in-game.

Luckily, the crafting process requires no ingredients and yields several copies of each available upgrade.

We like the Bleed and Impact attachments in particular. Give them all a try to see what suits your persona gameplay preferences the best.

There are so many new ways to deal damage. 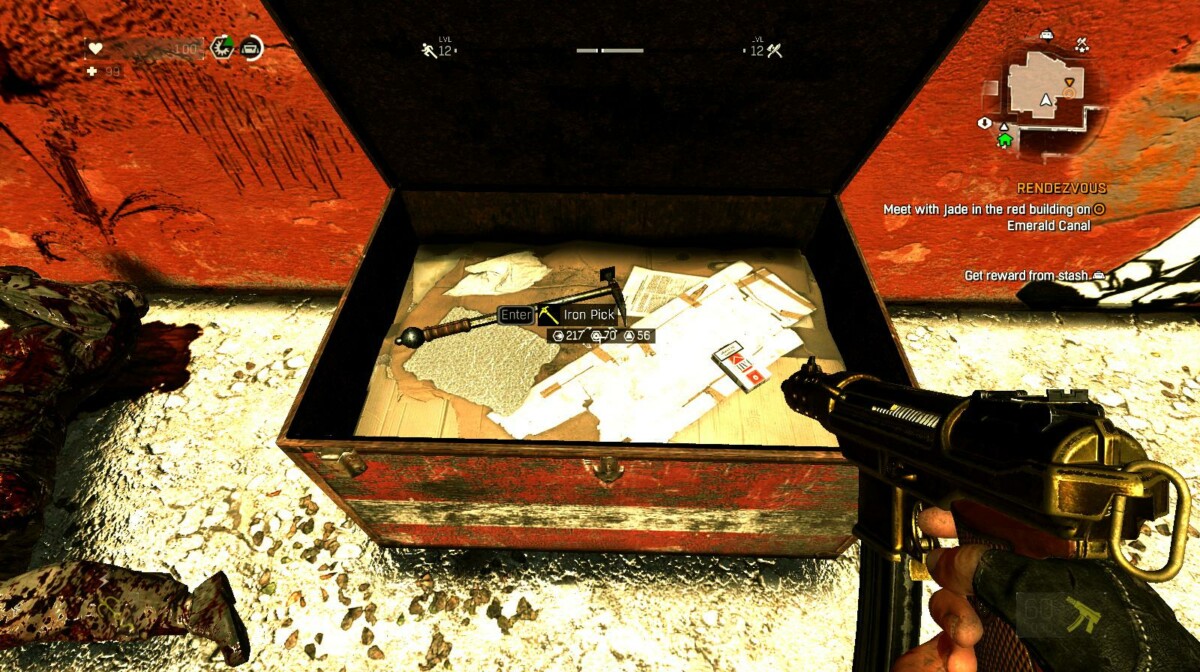 Weapon Loot Rarity Control improves the loot spawned in chests in order to keep lockpick worthwhile for the player.

After playing Dying Light for a while, lockpicking becomes such a drag that players will forgo rewards that aren’t worth the time it takes to obtain them; this mod aims to remedy that.

Valuable drops like gold weapons can now be obtained from police vans.

Lockpicking can be disabled altogether if desired. This mod breathes some fresh air into mid-to-late game activities. 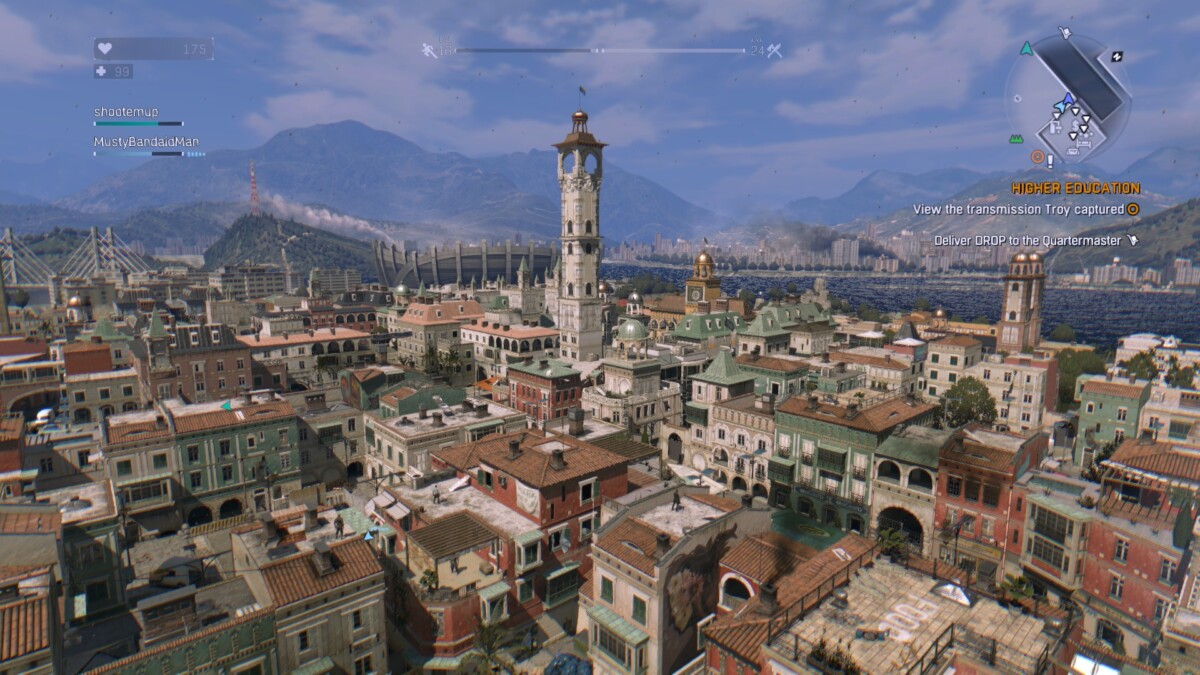 SweetFX improves the visuals of Dying Light by removing the yellowish-green light filter that covers the screen.

The colored filter in the game adds a distinct ambiance and tone, as it was intended, but it can get fatiguing for the eyes and old after a while.

This mod makes it easier to enjoy the scenery on a sunny day or appreciate the rain at night.

The city of Harran takes on a whole new vibe with all of its true colors on display. Some combat situations might seem MORE threatening in natural light and full color.

There are SweetFX mods for plenty of other games; we always recommend giving them a try.

Advanced Moves gives the player over a dozen new skills and enhances a handful of base game skills.

These custom skills are free to learn; just meet the character prerequisites.

Some novel additions include attaching a rope to your thrown weapons, devastating hand-to-hand combat moves, and traits that bestow advantages under certain conditions.

All skills can be bound to keys for easy use, along with your equipment and watch. 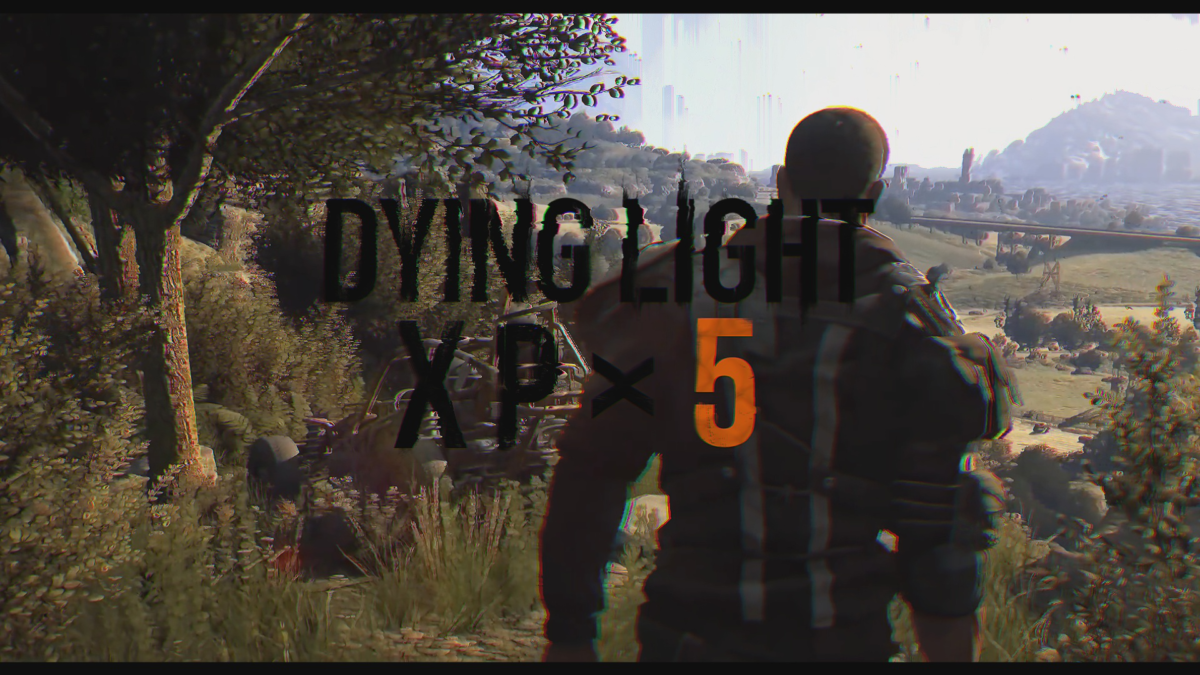 This All In One mod makes the player character’s weapon durability and health unlimited while offering a 500% XP rate.

The effects can be toggled on and off individually. It’s pretty much a god mode.

An All In One buff mod like this makes the game a sandbox.

When you can’t die or use up your weapons, there’s nothing to be afraid of when you jump out of the safe zone to explore.

Zombies aren’t a problem anymore; kill as many, or few, as you want. 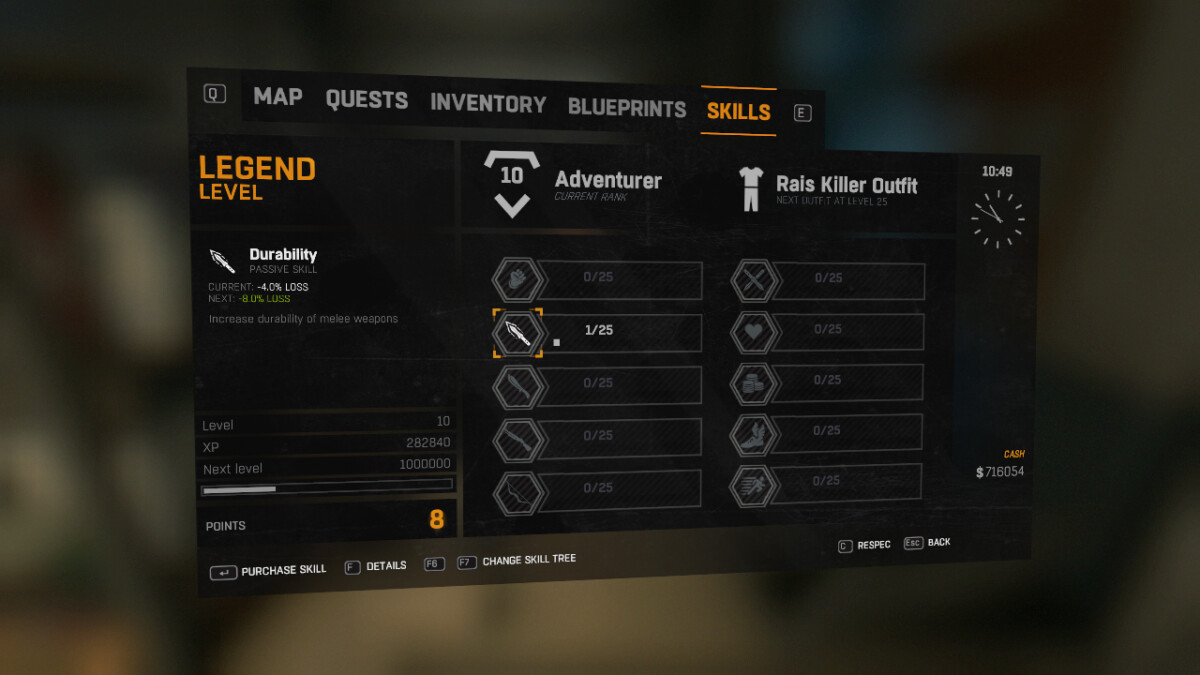 This mod upgrades the Legend Skill Tree to be more powerful. The creator thought that the tree did not live up to its name in the base version of Dying Light; it’s time for players to be true legends.

The new and improved Legend levels will increase your inventory slots and your chance of finding platinum weapons.

The tree now enhances weapon durability, effectiveness, and stamina. A custom branch, “Luck,” increases the player’s chance of breaking bones, stunning enemies, saving money at vendors, and so much more; it can augment any game feature that relies on chance.

We enjoy the movement speed buff the most as we parkour around the ruined cityscape. 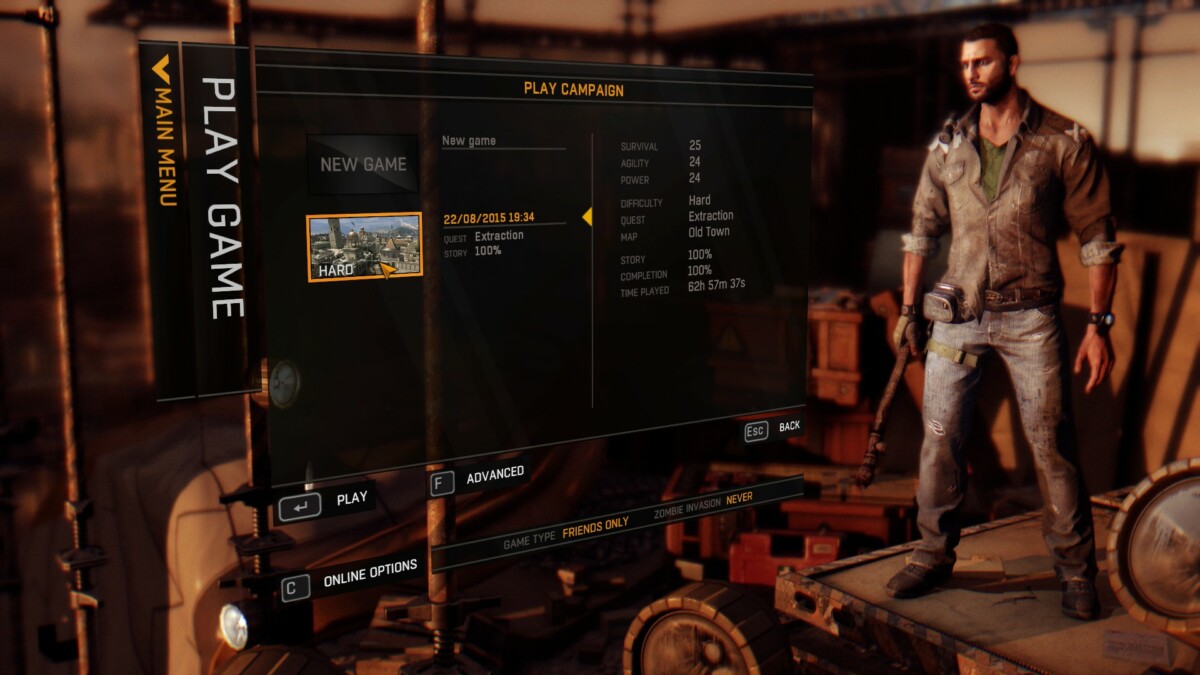 Completed Campaign Save File is a save file with 100% completion in Story Mode.

Such a file allows a player to start the game with hard mode story complete, max survivor, agility, and power levels, and all quests complete.

Late-game repeatable quests are immediately available. Plus, the save file comes with a whole stack of every craftable resource and several upgrades.

The included arsenal of gold and platinum weapons would be worth a download on their own.

This is another mod that turns Dying Light into a sandbox-y experience some players might be looking for.

(Or a good way to get back into the game after losing your own save file somehow. Starting all over is a drag.) 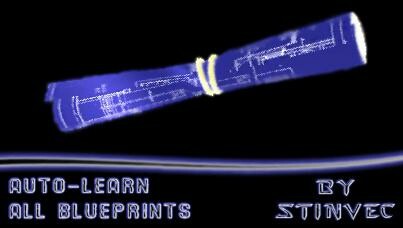 All Blueprints makes the player character learn every blueprint in the game upon loading a saved game or starting a new one.

You still need materials and resources, but removing the need to locate or pay for certain blueprints saves time for players who don’t enjoy that aspect of the game.

It feels good to have every option at your disposal at all times.

Once the mod has done its work on a save file, it can be uninstalled, and the learned blueprints will remain.

2. All Items In Shop 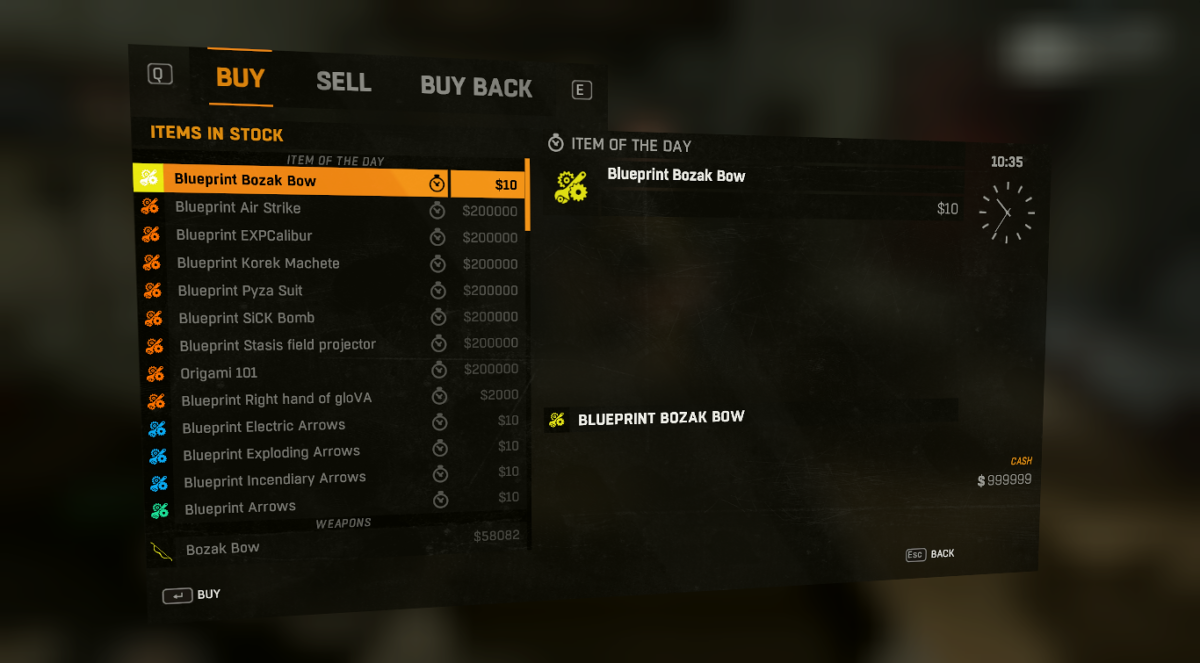 All Items In Shop Mod makes every buyable item available in the shops. All other aspects, like their prices, are unchanged.

Removing the artificial time limits on weapon cycles and item availability allows for unrestricted playtime for players who don’t have the time, or desire, to check in periodically to catch new weapons in a mostly single-player game.

This mod requires the DyingLightManager program, which can be found in its description. 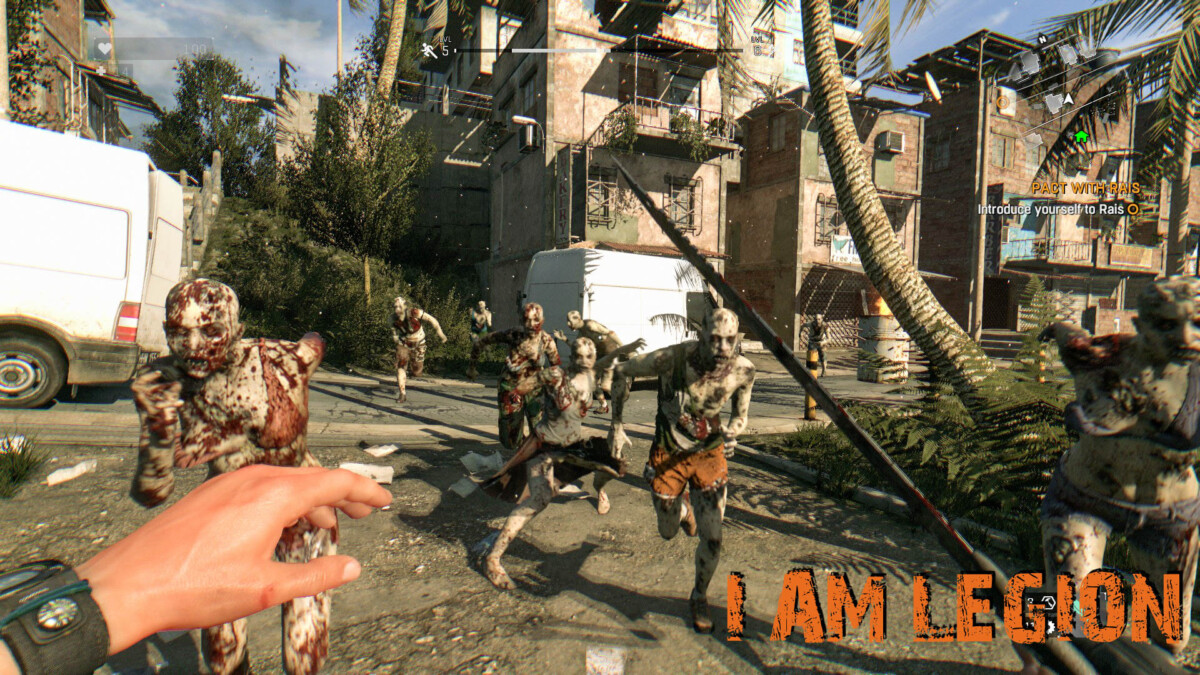 I Am Legion is a comprehensive rework that makes the apocalyptic environment of Dying Light more intense and immersive.

We love Dying Light, but with a bit of time and practice, the threatening nature of the world begins to dull pretty quickly.

This mod aims to add more danger to the game by making the AI tougher, the weather less predictable, changing the way inventory and the trader work, sound script tweaks, and way more.

The city of Harran is rendered the oppressive, dangerous place we were all hoping for when we hopped into an action survival game featuring zombies and insurgency.

There is also an I Am Legion mod for Dying Light 2: Stay Human. This mod is a must-have for challenge chasers in either game.