Project Zomboid is an open-world zombie survival game. Alone or with friends, your goal is to survive as long as possible.

You’ll need to loot, build, craft, fight, farm, and fish to stay alive, and there’s an immense map to explore.

If this treacherous zombie sandbox is a little intimidating, there’s a tutorial raccoon to help you out. But beware: all it takes is one bite…

How will YOU die in the towns of West Point and Muldraugh? (Or Bedford Falls?)

Our picks focus on mods that add vital quality of life upgrades, expansion-like new mechanics and possibilities, or fun cosmetic changes to make your time in the zombie-infested survival horror apocalypse more enjoyable.

On this list, you’ll find everything from simple mods to new worlds. 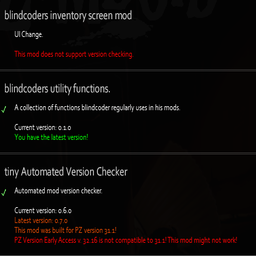 Tiny AVC and mods like it are must-haves for playing mod-heavy games. It’s an excellent first download to avoid issues before they arise.

Tiny AVC (Tiny Automated Version Checker) is a tiny mod for Zomboid that will check the mods you have loaded and make sure they are not out-of-date.

This saves the time and hassle of figuring out which mod is keeping the game from running correctly. We put this at #15 because of its foundational nature. 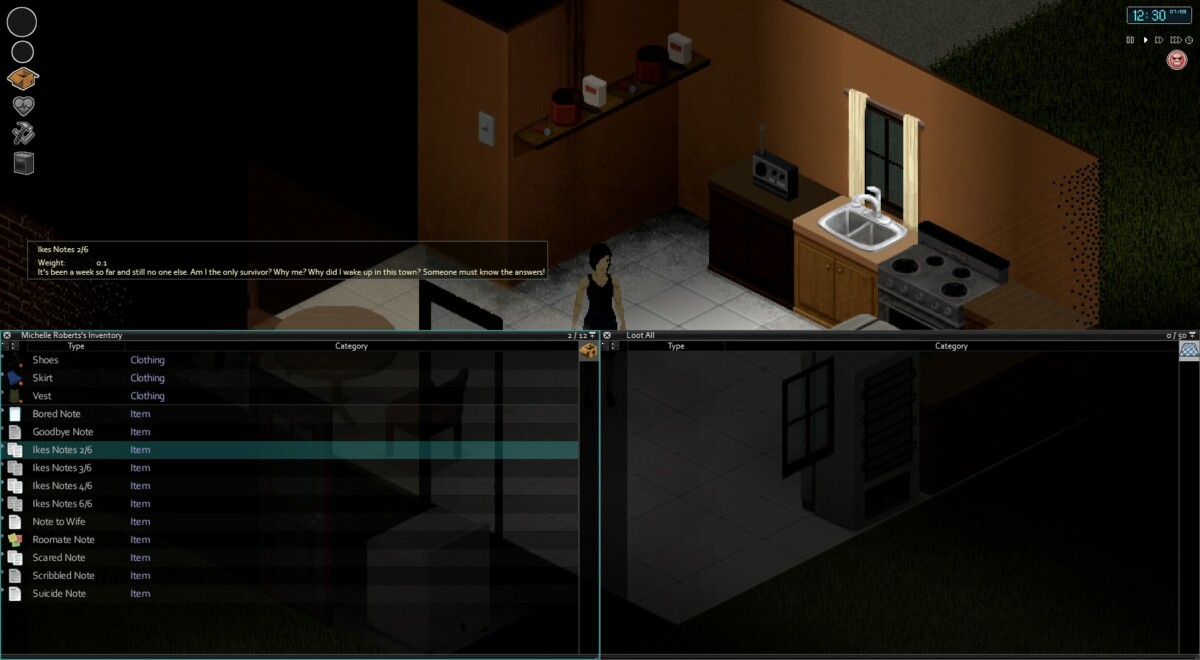 Pre Apocalypse Notes is for Project Zomboid players who are into the lore and atmosphere of this survival horror setting.

Somber relics of a world lost are some of the best details in these kinds of stories.

Apocalypse Notes scatters 30 different bits of flavor text in the form of notes. Each will reveal something about the world before the zombie apocalypse took place.

The immersion and intrigue of blighted Kentucky get a boost from the addition of these little details.

Players can also add their own notes to the mod with relative ease. 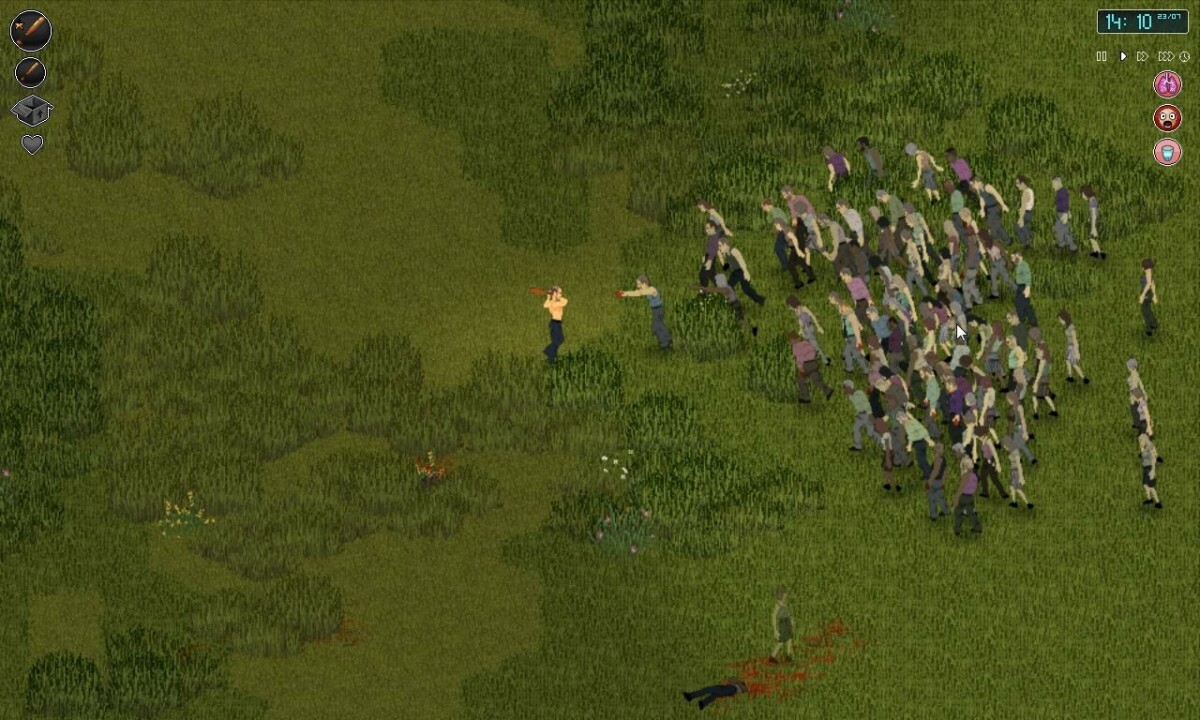 Zombie Dupe Mod will cause two more zombies to spawn whenever you kill one unless it is on fire.

This type of insurmountable challenge adds hours of novelty and challenge as players devise ways to scrape by in a world that was already harsh enough before being populated with a possible infinity’s worth of zombies.

All of our tips and tricks would involve fire, fire, and more fire. 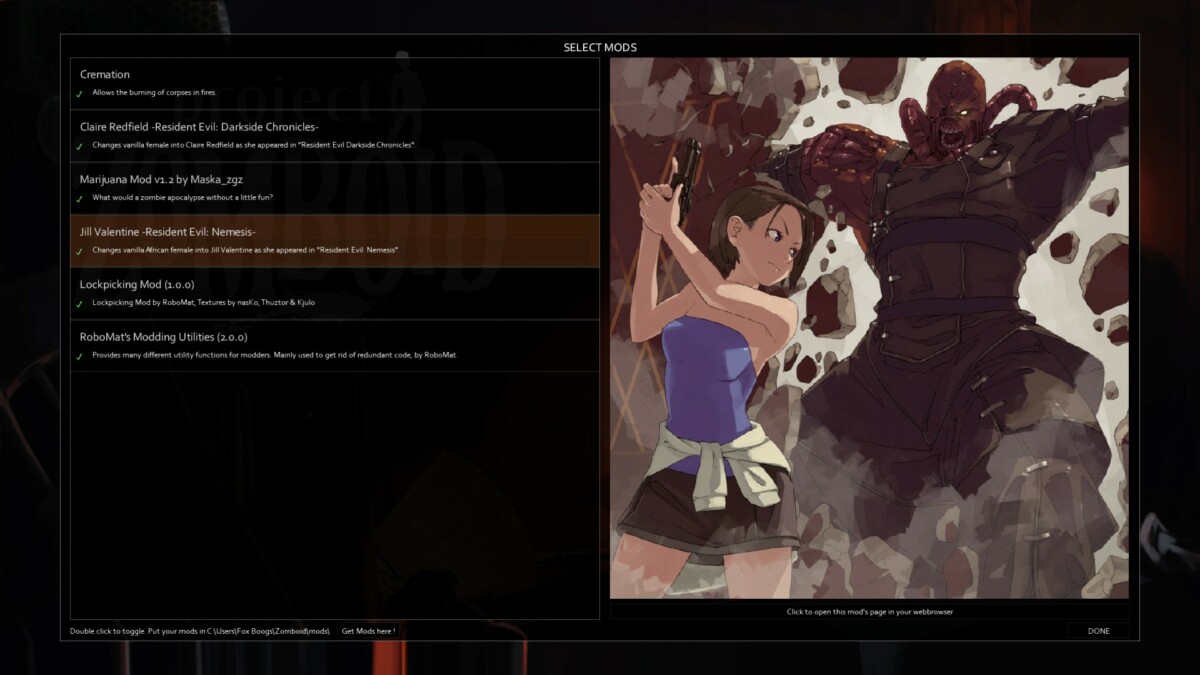 You won’t find Nemesis or STARS in PZ, but you can find one of Resident Evil’s most celebrated badasses.

This mod allows the player character to look like Jill Valentine; She made her first appearance as the only female playable character in Resident Evil.

Jill has gone on to appear in several other RE titles as well as movies, starting with the second. 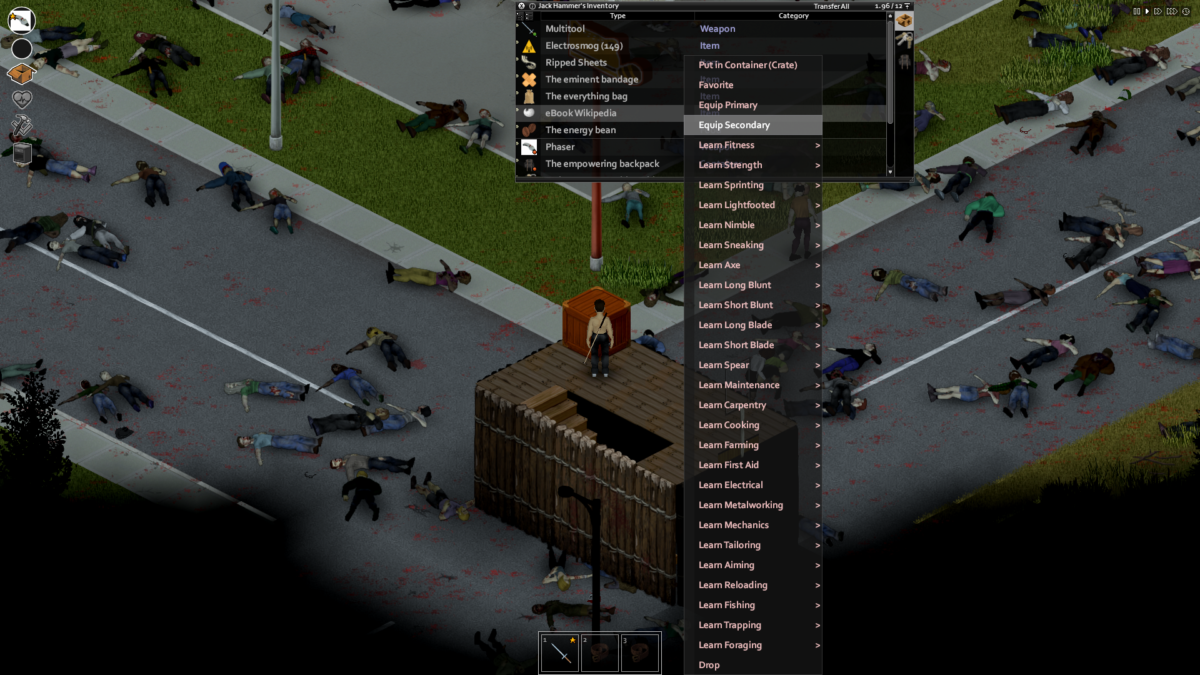 Cheating Mod does exactly what you’d expect it to do. Use it to realize your fantasies.

This mod lets you spawn a mountain of different overpowered recipes and items.

Players can become a god of the zombified wasteland with bottomless bags, the ability to cure or fix any and everything, or weapons capable of destroying whatever is unlucky enough to cross the player’s path.

There are even ways to give yourself a free experience through custom items if you wish. 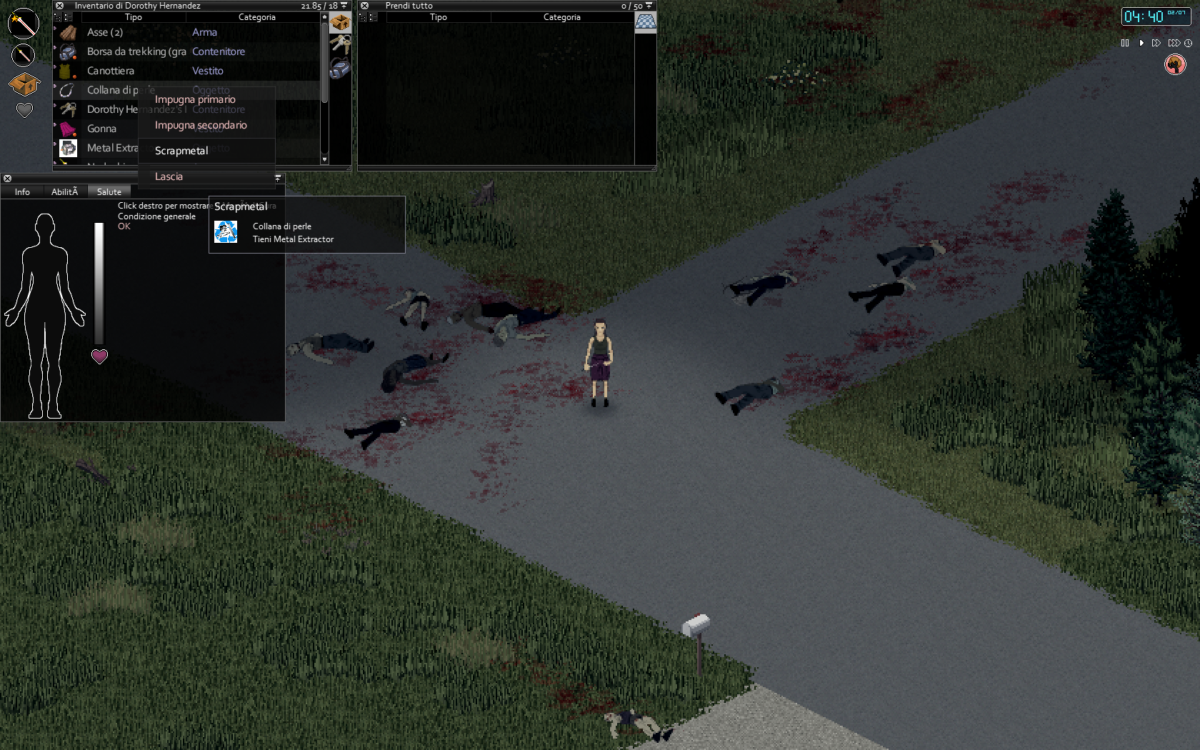 Recycle, and Craft brings the efficiency and survival techniques in Project Zomboid to the next level.

It’s perfect for people who hate to waste their digital supplies and think they could be put to good use.

Players can turn overlooked metal scraps into one of several new melee weapons with this mod. Plus, keep food longer using the custom dehydration preservation technique.

We think this simple mod adds a surprising amount of depth for its size.

These new mechanics fit beautifully into the vanilla game; they feel darn near original. 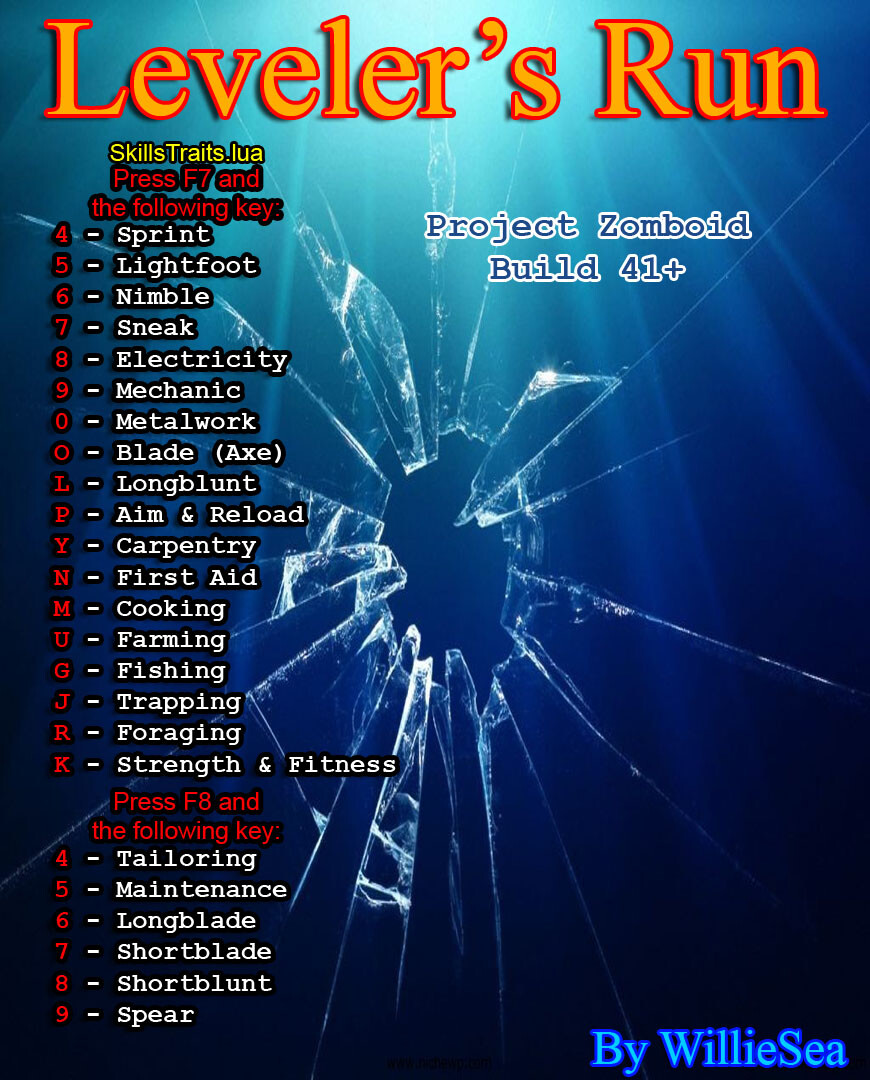 Skill Bonus takes all the work and time out of getting stronger and more capable in Project Zomboid.

With Leveler’s Skill bonus mod, players can increase their exp in a given trait or skill with a few button presses.

This mod is great for skipping setup time in self-imposed challenge modes or skipping to the fun part of the game for players who don’t enjoy the leveling process.

Having a high sneaking, nimble, and sprinting levels right at the start of the game is one of our favorite ways to use this mod. (We still like to level the rest by hand.)

Players with no interest in the other features of #11 will find this mod super helpful. 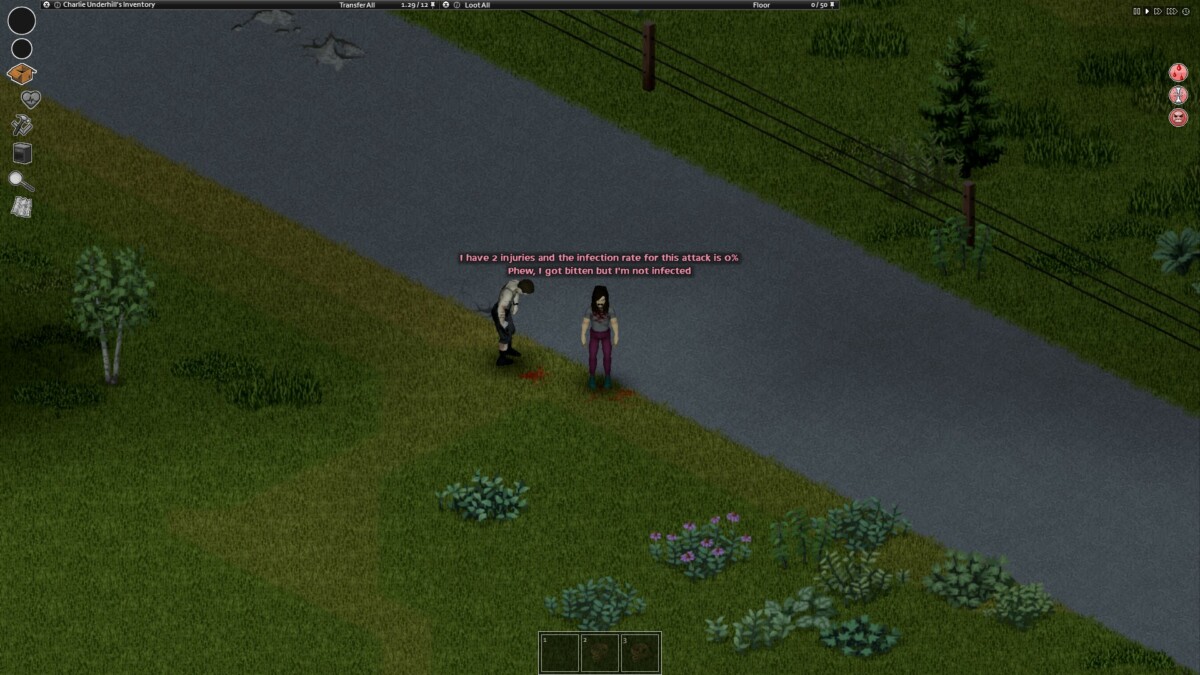 Infection Threshold preserves the danger and challenge of fighting zombies while removing the random chance aspect of infection.

This mod changes the zombification mechanic in the game.

Rather than rolling dice behind the scenes to determine if your character receives the infection, the chance is related to how many injuries you’ve already sustained without taking the time (or getting the opportunity) to heal fully.

The first few hits from a zombie will never infect you; it feels significantly fairer and up to the players’ decisions. 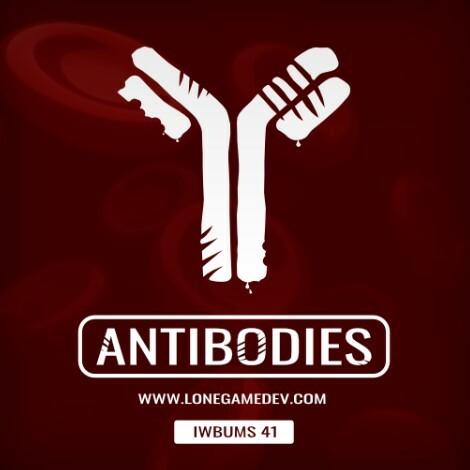 Antibodies Mod is another one that tweaks the core mechanic of infection to make it more interesting, realistic, and relevant to the player’s actions.

Players’ infection levels will now be compared against a rising antibody level that’s been designed to mimic the human body’s immune response.

If the antibody levels eclipse the infection, you will slowly recover until free of the zombification threat.

Factors like infected body parts and character traits influence the infection and antibody rates. It feels timely given the state of the world right now, doesn’t it? 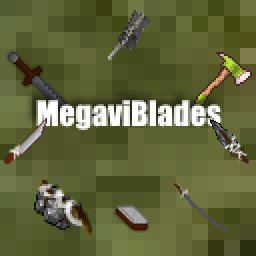 Megaviblades is for lovers of melee weapons looking for new things to swing at the undead. Ranged weapons do not offer the same hands-on feel.

This mod adds several bladed or edged implements to the game.

Take up a razor-sharp katana to slice and dice your adversaries or craft a stone saw to help with gathering wood.

Both weapons and tools, Megaviblades comes with a tasty amount of power and utility for a more successful survival tale. 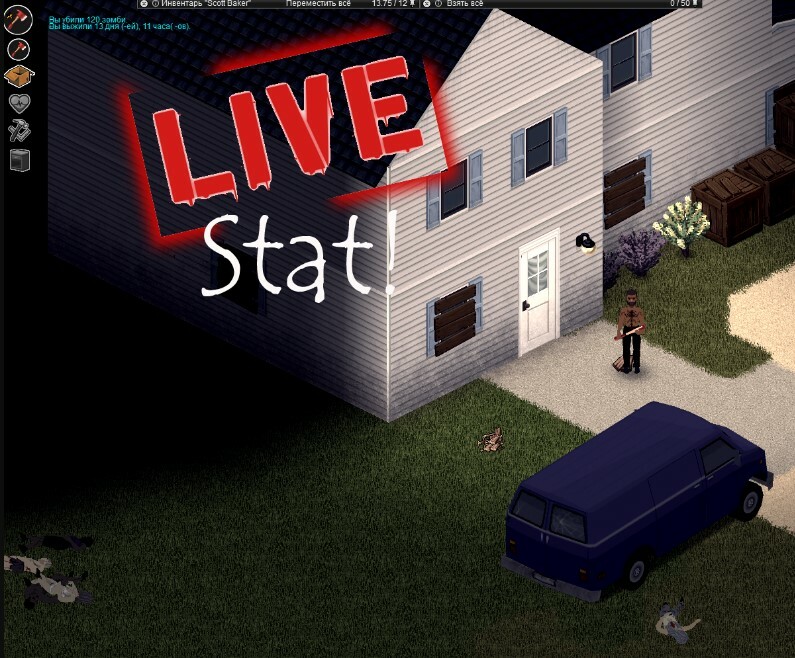 LiveStat monitor displays how many zombies you’ve killed and other real-time survival-related statistics in Project Zomboid.

There’s not much else to say about such a simple mod; press F11 to display the LiveStat tracker.

There’s an added sense of achievement players get from more extended plays when they can monitor how well their survival is going.

This mod adds new recipes for rabbits’, rats,’ and squirrels’ pelts for Expert Trackers that players will get along with the meat that usually drops.

Using a needle, thread, and this new fur material, players can craft a fur coat and fur pants to combat the cold more effectively. Any mod that makes an under-used skill more playable is golden.

Be a warm and cozy furvivor. Please accept our formal apology for that pun.

Vehicle Repair Overhaul offers a solution for those beaten-up clunkers strewn about the ruined world.

We’ve all been irritated by a vehicle that would be great if only it weren’t two hits from permanent destruction.

VRO adds parts and salvage for repairing vehicles. Skilled mechanics can also repurpose parts into usable items or graft parts from one wreck to another in the hopes of restoring it.

Players with high mechanic or welding skills will find themselves several orders of magnitude more useful with this useful update.

We’d vote for this mod to become a permanent feature of Project Zomboid. 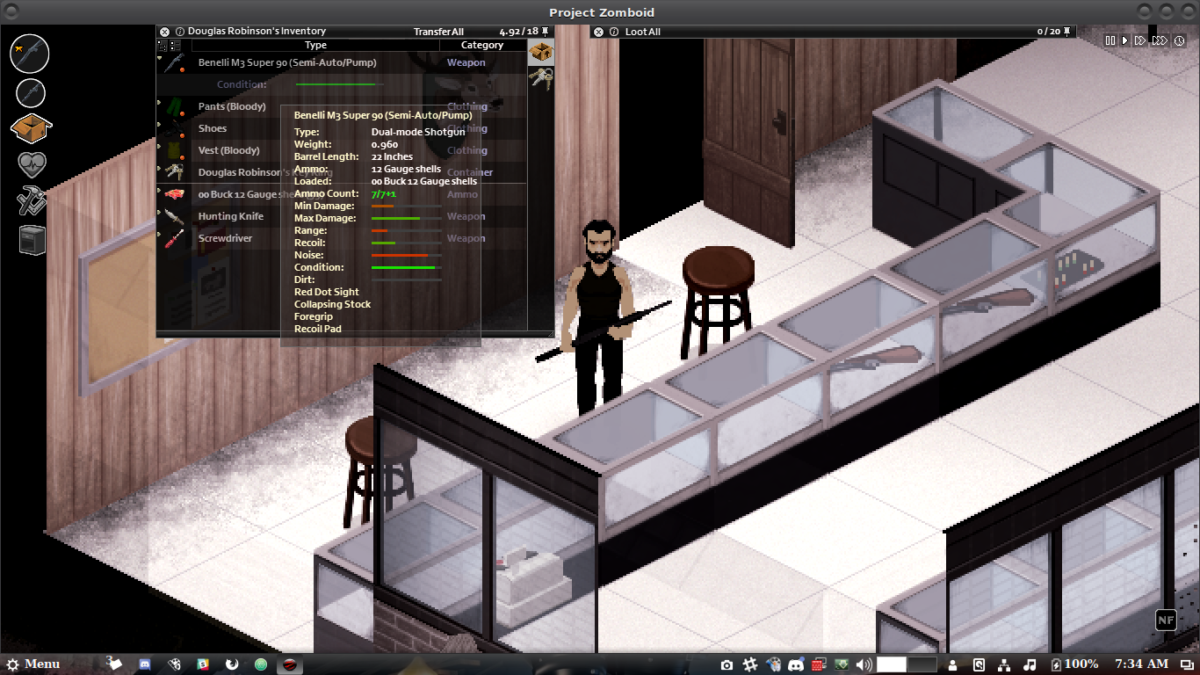 Rechambered is a continuation of OrMntMan’s legendary Real Guns Mod.

This mod adds over 100 new guns and realistic firearm mechanics, as well as over 40 settings that can be configured to tweak behavior, balance, and spawns.

Translations are available in English, Russian, and Chinese. With ORGM, players can adjust any setting or detail about these items, including spawn rates and weapon stats. 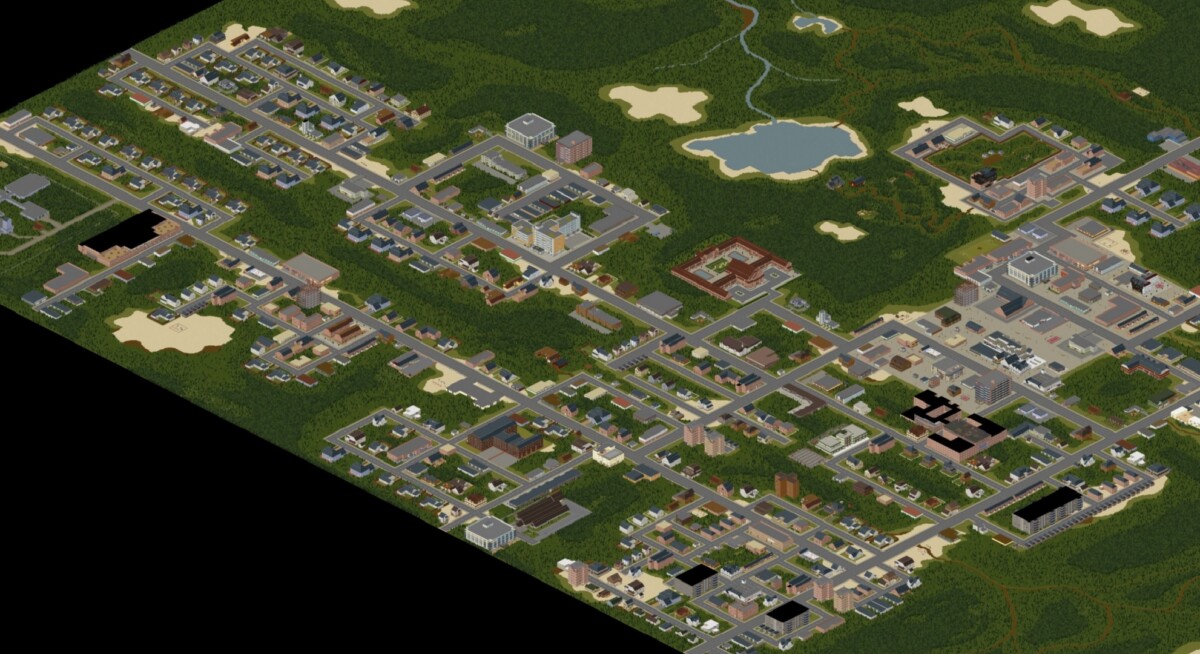 This mod adds the fictional town of Bedford Falls to the base-game Project Zomboid world. Compatible with build 41!

Bedford Falls boasts over 800 buildings created by people from the modding community and PZ fandom at large.

The most significant feature of all NO MORE EASY MODE! Bedford Falls is a blast; all big Zomboid fans should take a trip to this town.

What else is there to visit in the apocalypse?