NieR Automata, developed by PlatinumGames, is the most recent major release in the spin-off/sequel franchise to Drakengard. We’re big fans of both franchises; Automata is beyond impressive.

As the Androids 2B, 9S, and A2, belonging to the Earth-defending force called YoRHa, players explore a one-of-a-kind apocalypse scenario; humans have supposedly been relegated to the moon in hopes of avoiding the machine lifeforms that now dominate the planet.

Please read on to see our top mod picks for the PC game.

The NieR Automata modding community focuses almost exclusively on cosmetics, custom weapons, and character models. NA doesn’t have any essential mods, but plenty to enhance your enjoyment of the game.

We’ve included several mods that throw in aspects from some of our other favorite games. Crossovers are all the rage right now. 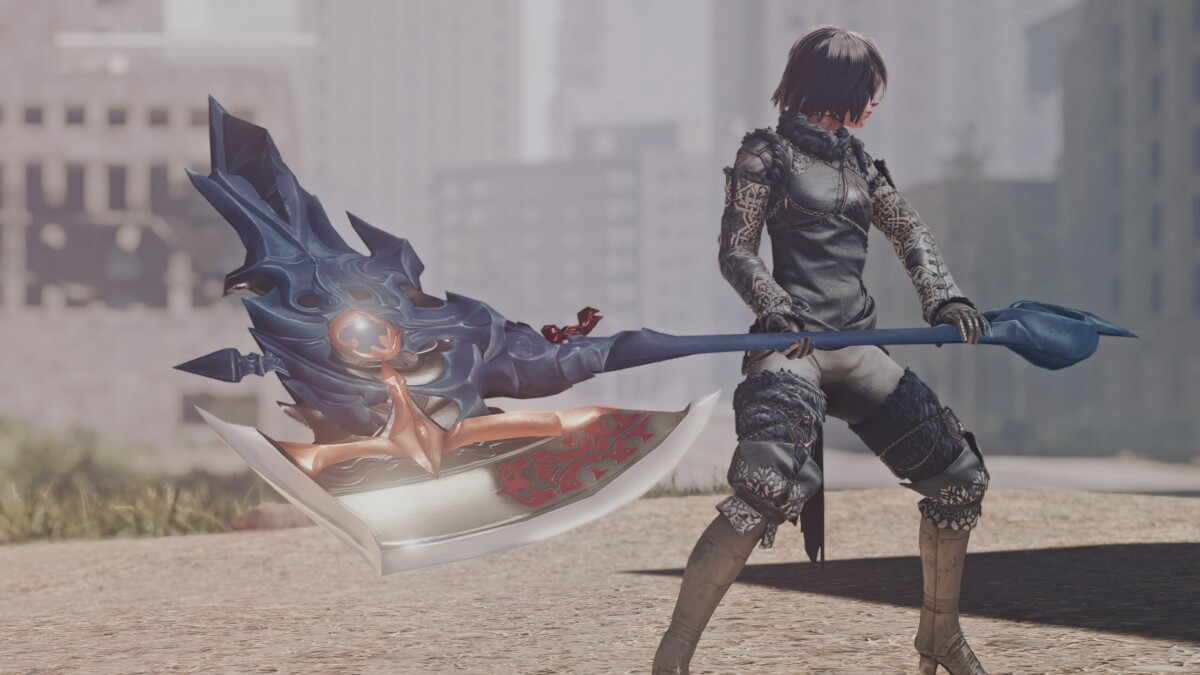 NieR and Final Fantasy are known for gorgeous and innovative art direction. These weapon models, including some of the original relic weapons from A Real Reborn, are an enjoyable crossover for fans of both franchises.

So it’s fitting that FF14 has three official in-game raids based on NieR Automata; this mod returns the favor, bringing Eorzea to the YoRHa. 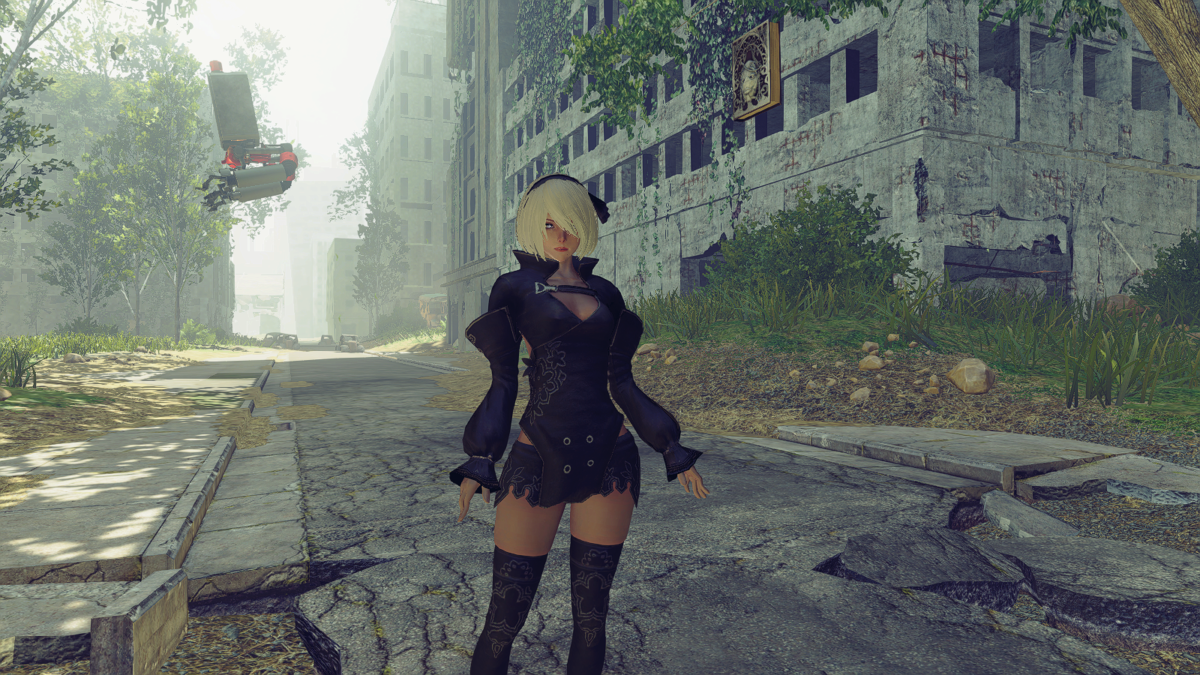 This mod adds the Reincarnation Outfit for 2B from the iOS and Android title, NieR Reincarnation, to Automata.

The alternate outfit features a shorter, sleek dress with fewer frills and more sleekness. 2B’s Reincarnation threads are more inspired by streetwear than the Automata outfit. 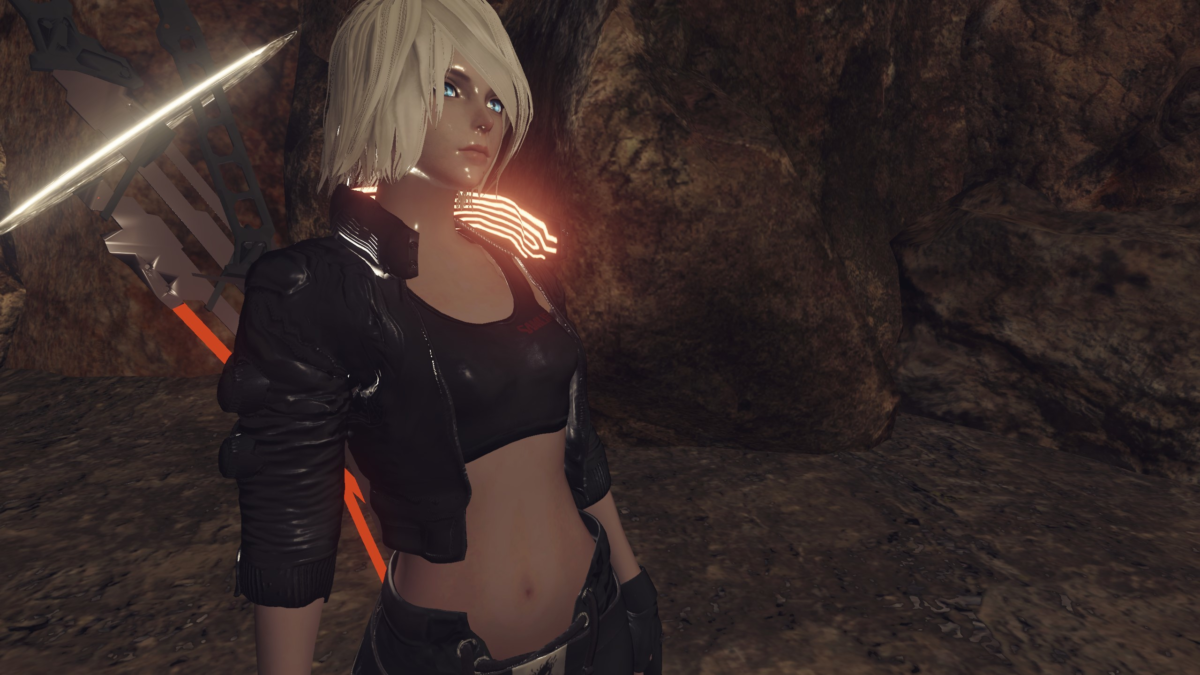 Cyberpunk Outfit adds the main character from Cyberpunk 2077’s outfit into NieR Automata for players to use with 2B. There is an alternate version of the mod for A2.

Another crossover mod, this time between NieR and Cyberpunk. 2B looks great in this near-future casual attire from the CD Projekt title. Two open-world action-RPGs come together in the name of fashion.

The outfit consists of a leather tank top, jacket, black pants, and heavy-metal greave-style boots. It gives 2B an off-the-clock vibe.

If only there were a Cyberpunk reskin for 9S, the whole YoRHa gang could be 2077-styled. 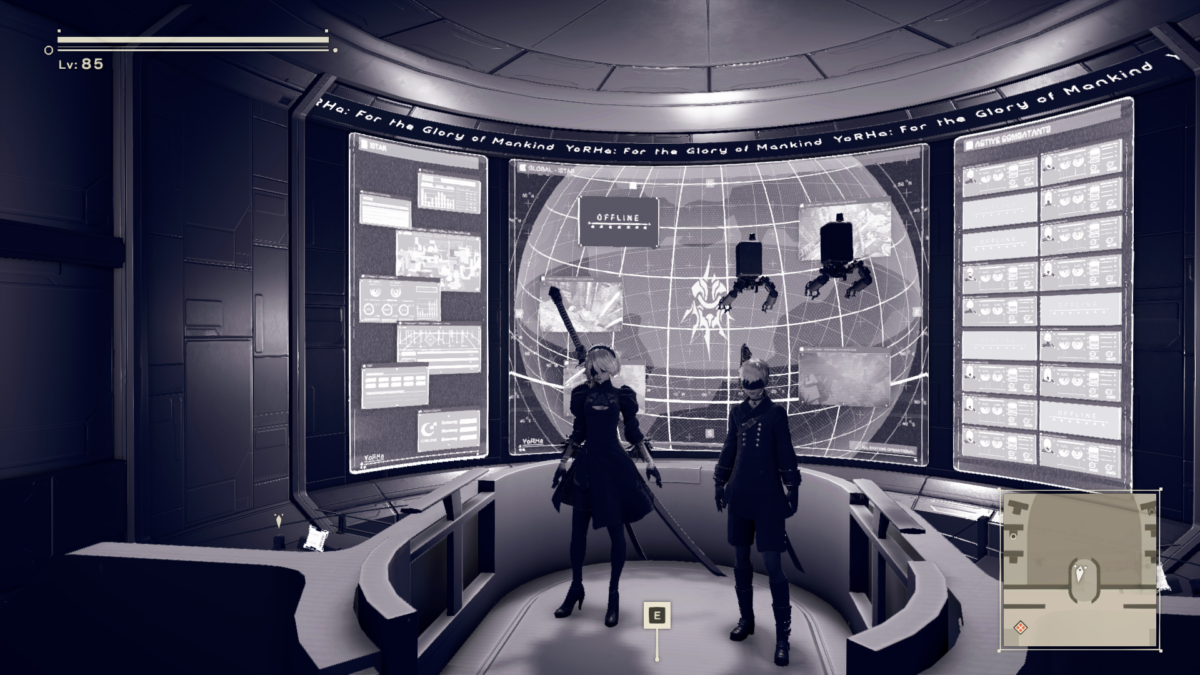 Vignette and Grain Removal makes parts of the game easier to look at by removing the grid overlay and the graininess in the bunker.

Having an intense black and white film grain in the YoRHa bunker is a robust artistic choice. We love the way it looks. Over time though, it wears on the eyes.

This mod clears up some of the distracting visual noise that loses its appeal as the player grows accustomed to it.

Our next pick further improves the player’s visual quality of life in the infamous bunker. 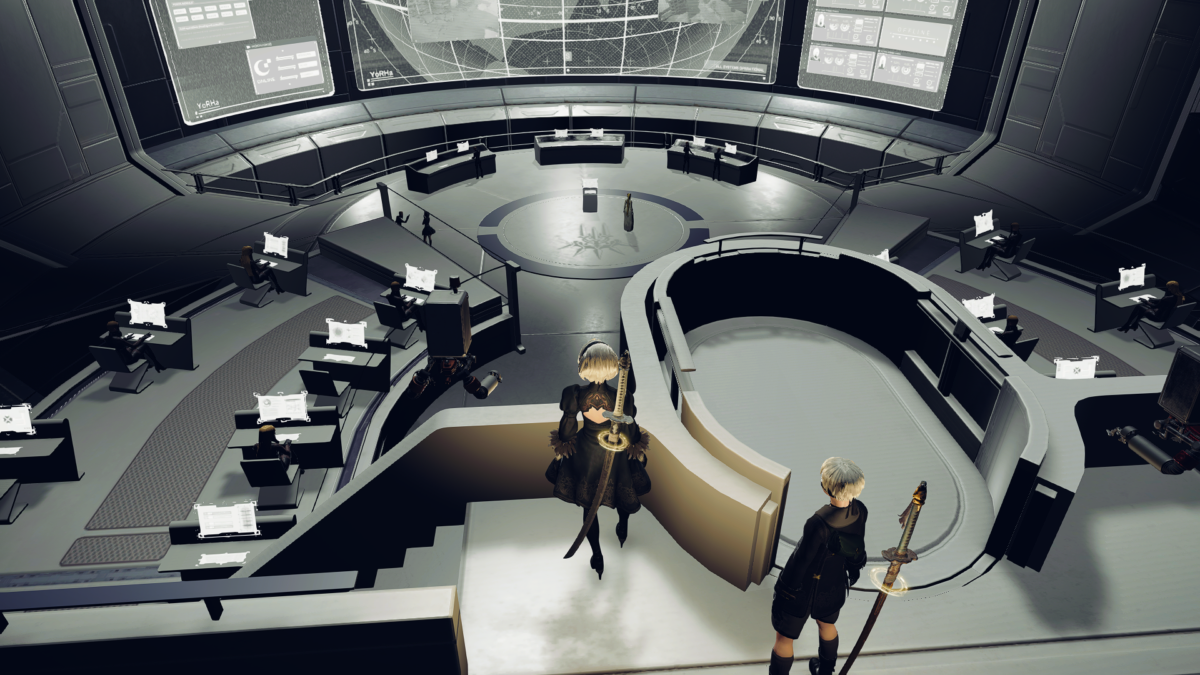 Bunker in Color removes the black and white filter that covers the screen while players are in the bunker.

Similar to the grid overlay and film grain effects, the lack of color can induce visual fatigue.

While a solid artistic choice, it’s hard to live in someone’s creative vision at all times. This mod makes the bunker appear in standard, full color like every other area in the game.

We don’t recommend starting your first playthrough with this mod, but after a few hours, you’ll understand why we included it on our list. 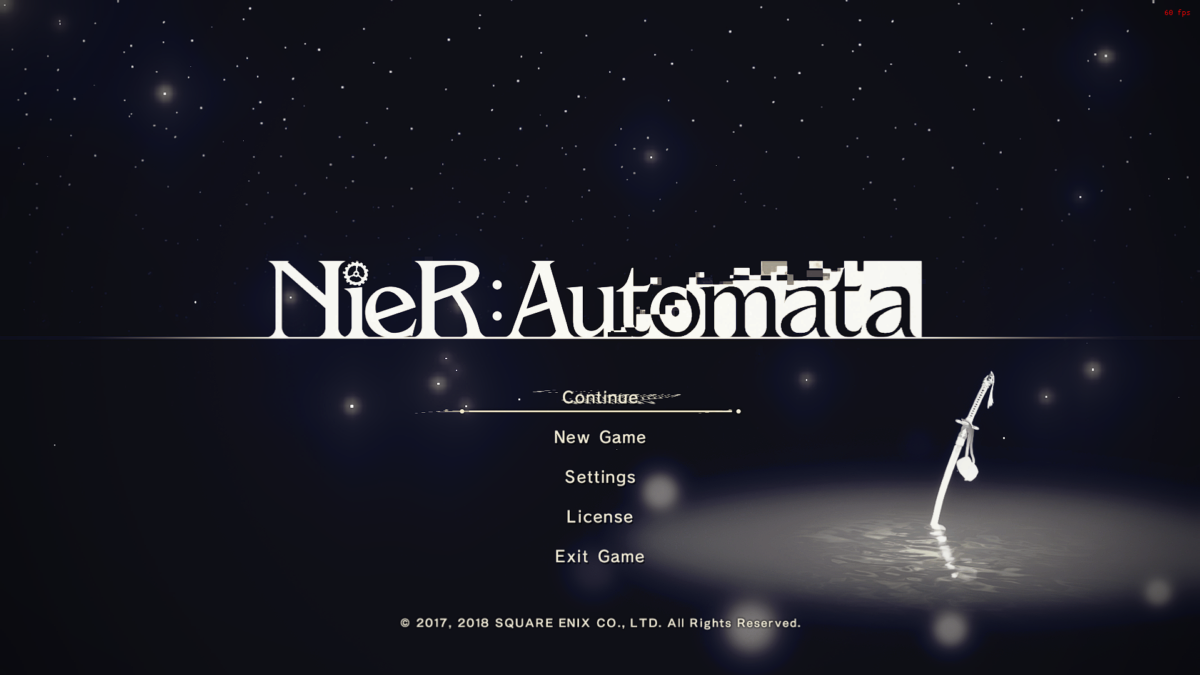 The third visual improvement in the rankings, this mod addresses some of the issues the home menu has. According to the mod’s creator, the color banding was problematic and needed to be addressed.

With this installed, the game will use different compression and fix up the color banding for a seamless experience in the menu. Tiny fixes like this add up the more of them you download, resulting in a polished game. 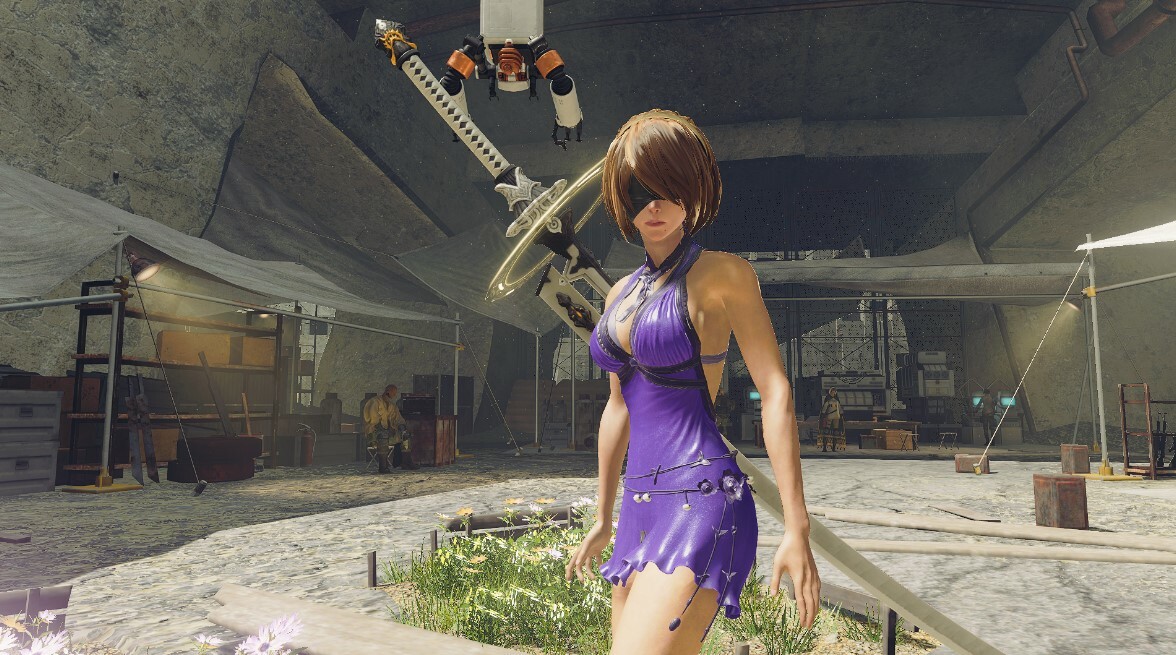 This mod adds Tifa’s Purple Dress from the FF7 remake to NieR Automata.

Dress 2B up in this fan-favorite purple outfit from the new Final Fantasy 7 remake.

It looks like you could buy it from a trendy shop at the mall; that’s probably where Tifa got it.

Maybe it will give our favorite machine-slashing android some added comfort, or perhaps she’ll enjoy the pop of color after wearing nothing but black for all eternity. Either way, it never hurts to have more style choices.

Keep reading for another Tifa-themed mod! 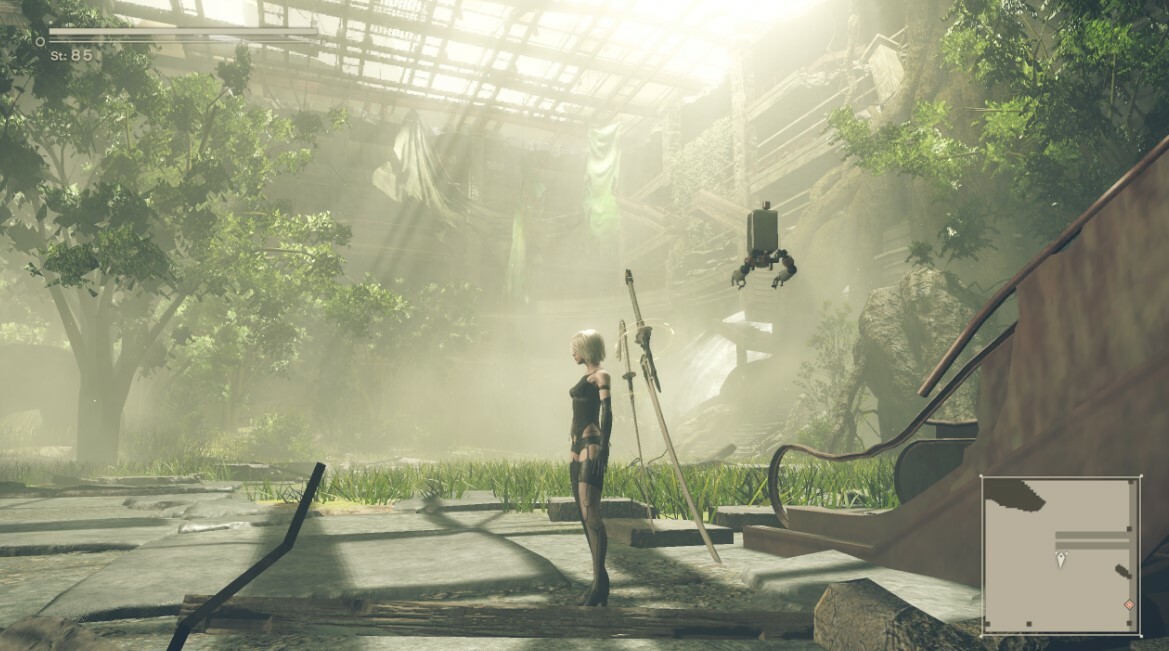 Clear Preset is a visual-enhancing preset for the ReShade standalone program.

‘Clear’ refines the visuals of Automata, making it better for people who like sharp, realistic graphics in their games. Things like sunlight haze, glare, and more are filtered out.

ReShade is a popular tool used by players of many different games to improve the graphics or tweak a game’s appearance to their liking.

Adding filters, removing filters, and changing rendering, this program can do a lot. ReShade is incredibly popular among the FF14 community, too.

ReShade is available from their website. It does not get inserted in the Automata installation like other mods do.

Pro-Tip: Check if it’s compatible with any other games you play.

12. Song of Broken Pines (from Genshin) 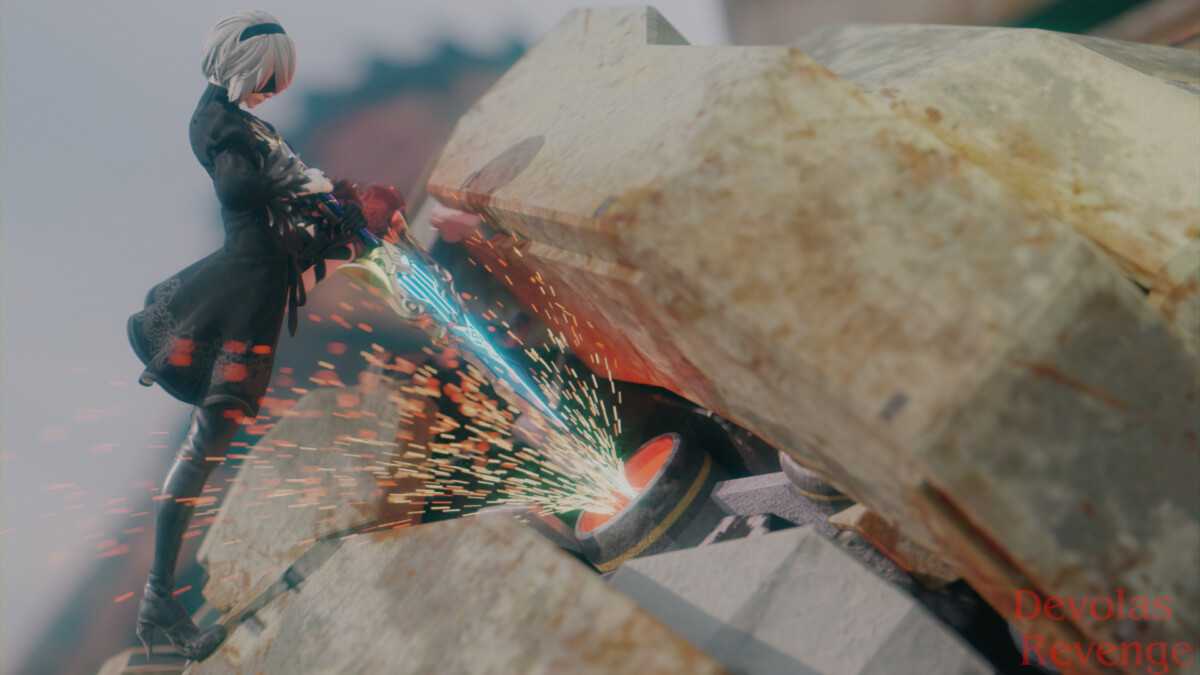 The Song of Broken Pines is a powerful, rare claymore-type weapon obtained in Genshin Impact. (More crossover models!) Its golden hilt and filigree complement the blues and grey of the blade.

Does 2B have Beidou energy? Kind of! Regardless, this heavy melee weapon will serve our favorite android well.

There’s a good deal of overlap between NieR and Genshin fans. 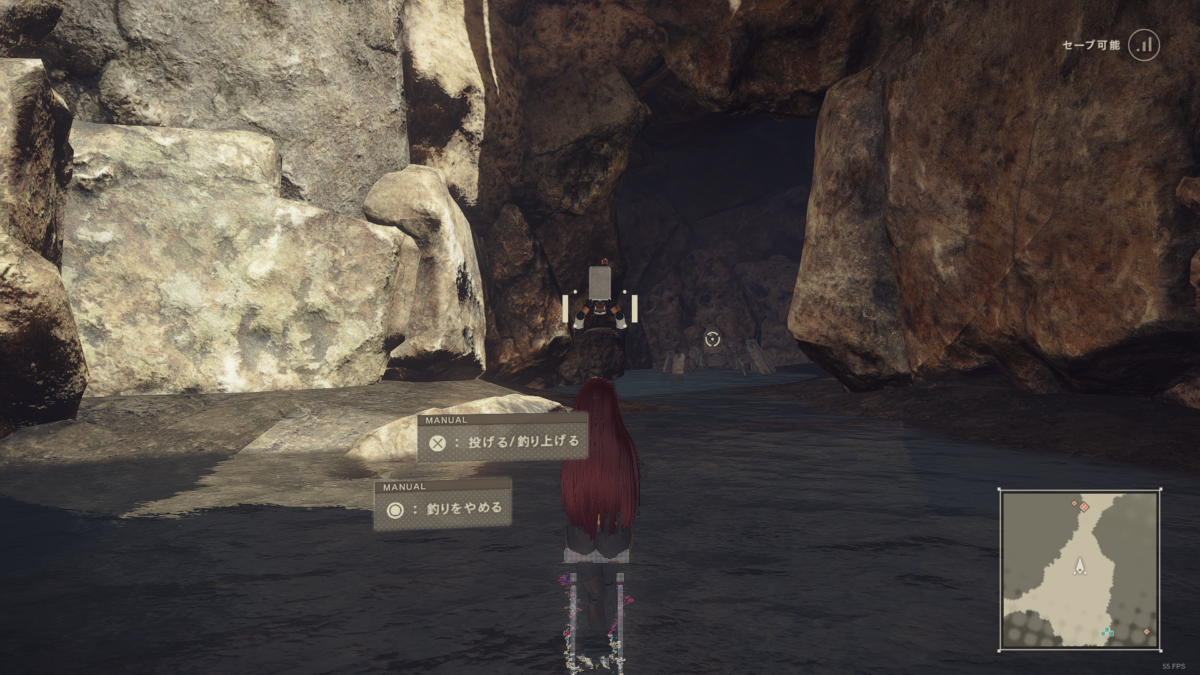 These textures are FAR-compatible, injectable, and are of a high enough resolution to fit and look professional on-screen on any high or low-end monitor.

Our preferred controller for PC gaming is the Dual Shock; the Xbox ones don’t feel right for us. Many games have a DS adaptation mod, thankfully.

NieR is still playable with a Dual Shock without this mod, but it makes the experience seamless. 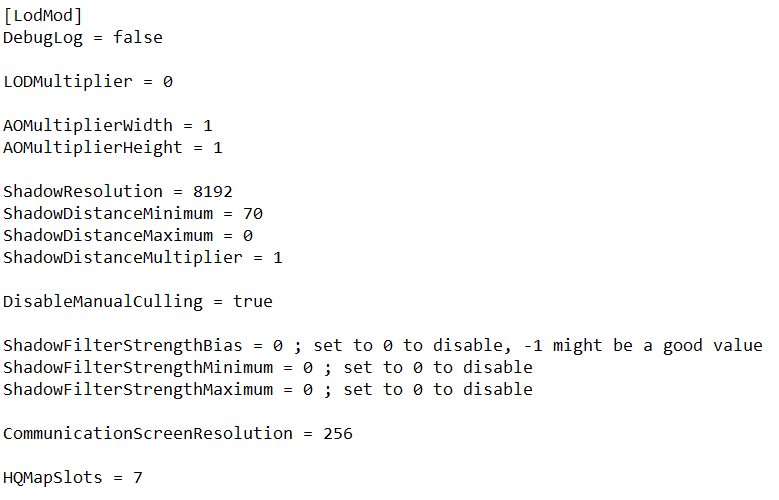 LodMod is a wrapper DLL that makes several graphical and performance improvements to NieR Automata.

The list of adjustments LodMod makes is long. Improvements include HQ shadow models, a manual culling toggle to reduce object pop-in, a toggle for the vignette effect, skips for the intro movie and booting screens, and an ambient occlusion multiplier, and too many more to describe here.

This mod is the perfect choice for those looking for a base game experience with loads of quality improvements that don’t change the art style or gameplay. This mod is an essential mod for any NieR Automata player. 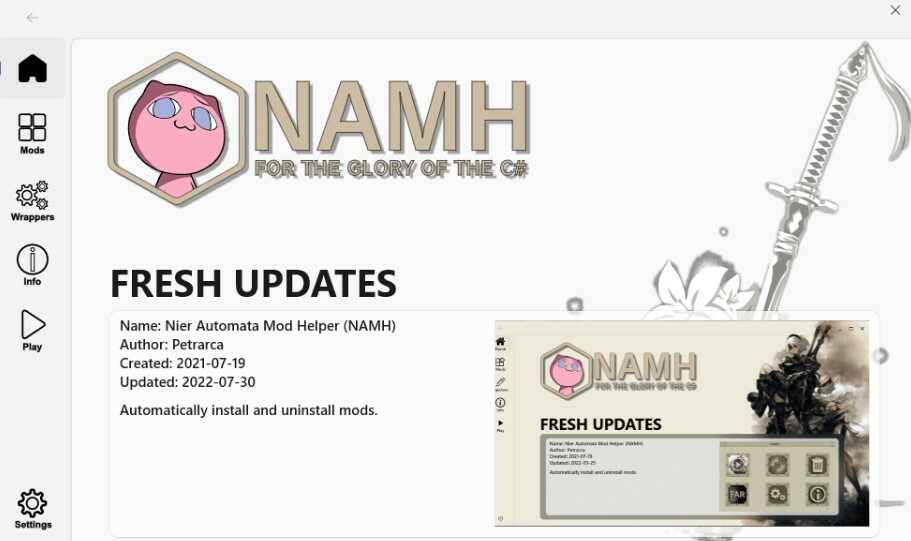 NAMH is a mod for assisting in the management of other mods. It is perfect for players less confident about moving installation files around. (Or for removing the risk of breaking your game. We’ve all messed up before.)

With the NieR Automata Mod Helper, the game installation is automatically prepared with relevant dependencies to prepare it for other mods.

In addition to prepping your game files, NAMH is able to install and uninstall mods and comes packaged with LodMod, ReShade, and Wolf’s patch.

Tifa’s Costume added to NieR Automata for 2B!

The Final Fantasy 7 party’s looks are iconic symbols in the world of video games. Cloud’s shoulder gear, Aerith’s bolero jacket, and Tifa’s casual-chic boxing-inspired outfit are among the most recognizable.

This mod dresses up 2B in that classic boxer outfit. It’s a look that suits her, in our opinion. We have two Tifa looks on this list; there may be some favoritism afoot.

When you think about it, the future-tech sci-fi settings of NieR and Halo are more similar than they are different. Master Chief and 2B would make a good team.

The closest we’ll get is these two custom weapon models modded in Automata…for now.

Of the custom models we’ve seen for NieR, these are a couple of the best quality.

NA Video Upscaled is another mod that enhances the graphical performance of NieR Automata.

This mod is for those players with top-tier fancy monitors and GPUs who want to push their gear to maximum potential.

As the name says, Upscaled makes NA 4K and pulls it up to 60 frames per second. Most players will be OK with the other graphical mods on this list, but the results from Upscaled are stunning to see. 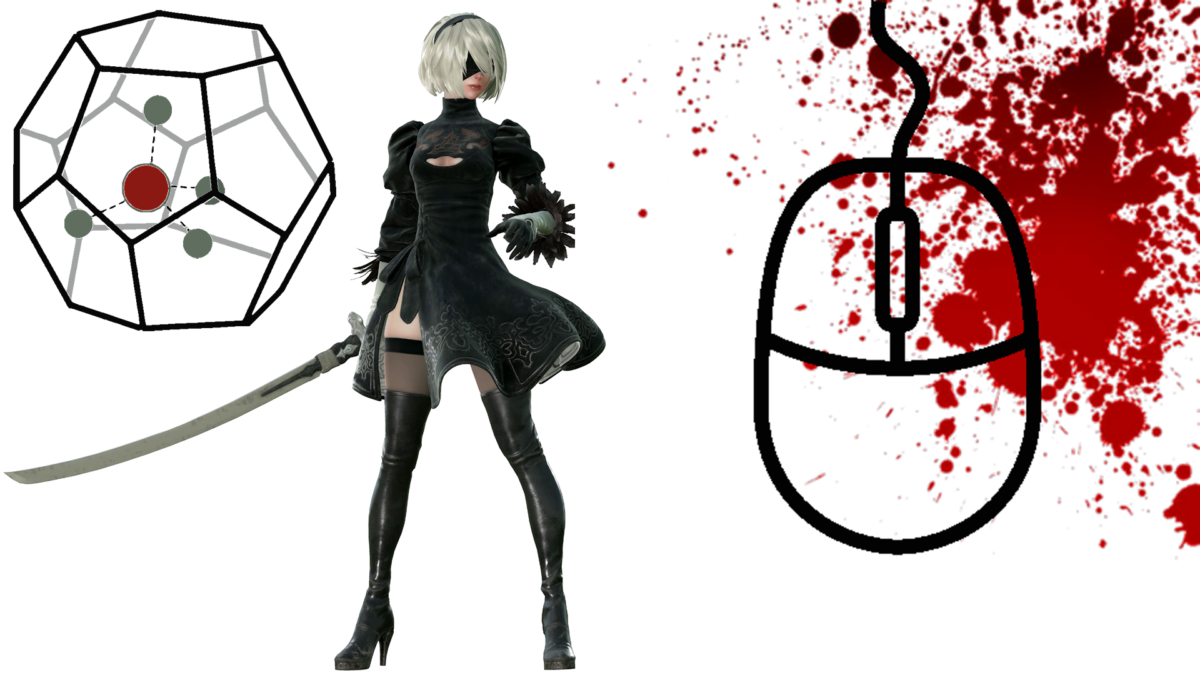 NieR Automata is a masterfully crafted game, but there are some input / output issues players run into.

NAIOM’s fixes include un-altered input from the mouse for camera and aim movement, a custom targeting reticle aim mode, rebinding options for dodge and dash, an auto-fire feature for the pod, and more.

If you notice the game not responding to your input to your satisfaction, this mod could be the answer. We felt and loved the difference, but others find it unnecessary.

2B and A2’s textures get total remasters in this pack. These textures were redrawn BY HAND by the mod creators. The craftsmanship in this mod is unreal.

It’s a bummer that select sections of the game are bogged down with low-res textures.

The inconsistency this presents lowers the overall quality of the gameplay experience. HD Texture Pack contains dozens of natural-looking, higher-res restorations for the stock assets. 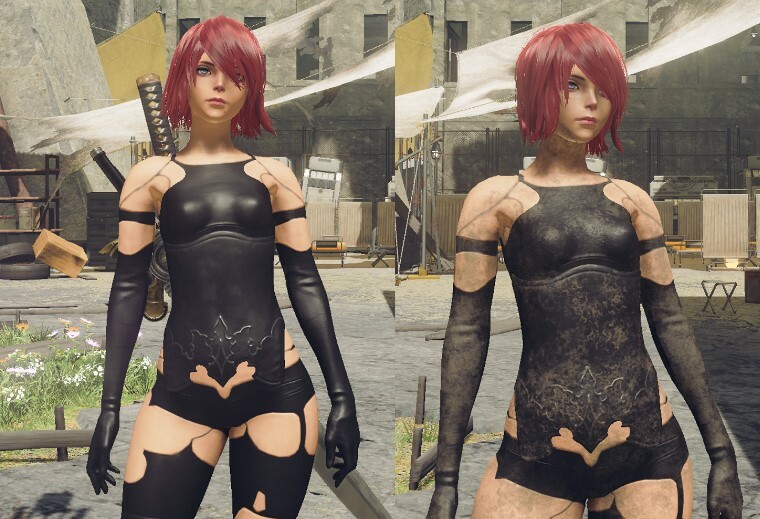 Androids Remastered is a custom texture pack for the androids 2B, 9S, and A2.

Unfortunately, some of the low-quality assets in NieR Automata are the textures and character models of the main cast.

This texture pack adds new, custom-made remasters for the three main characters, making them more realistic and pleasing to look at while playing.

Combine this mod with numbers four, six, and ten to achieve the most elevated version of Nier Automata’s graphics possible.

It makes sense to upgrade the stars of the game! 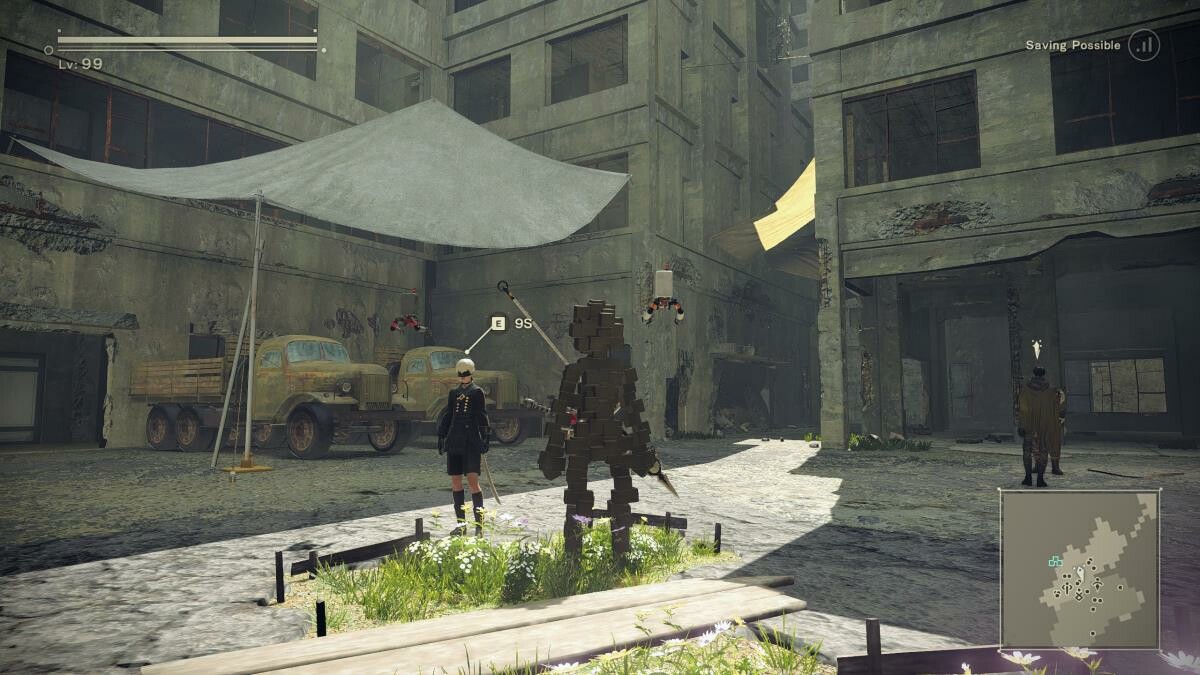 Become as Bloby replaces the 2B model with Bloby. A little guy who’s as controversial as he is charming.

Bloby’s recently been all over the news for his dubious appearance in that not-so-secret church buried deep within NieR Automata.

Is Bloby an undefeatable menace or an innocuous little man? Only each individual player can be the judge of that.

The Bloby model is a cute, hilarious alternative to 2B. Playing the game as this machine is a blast. We recommend this for 2nd playthroughs or late in your first, no earlier. Get the genuine experience first. 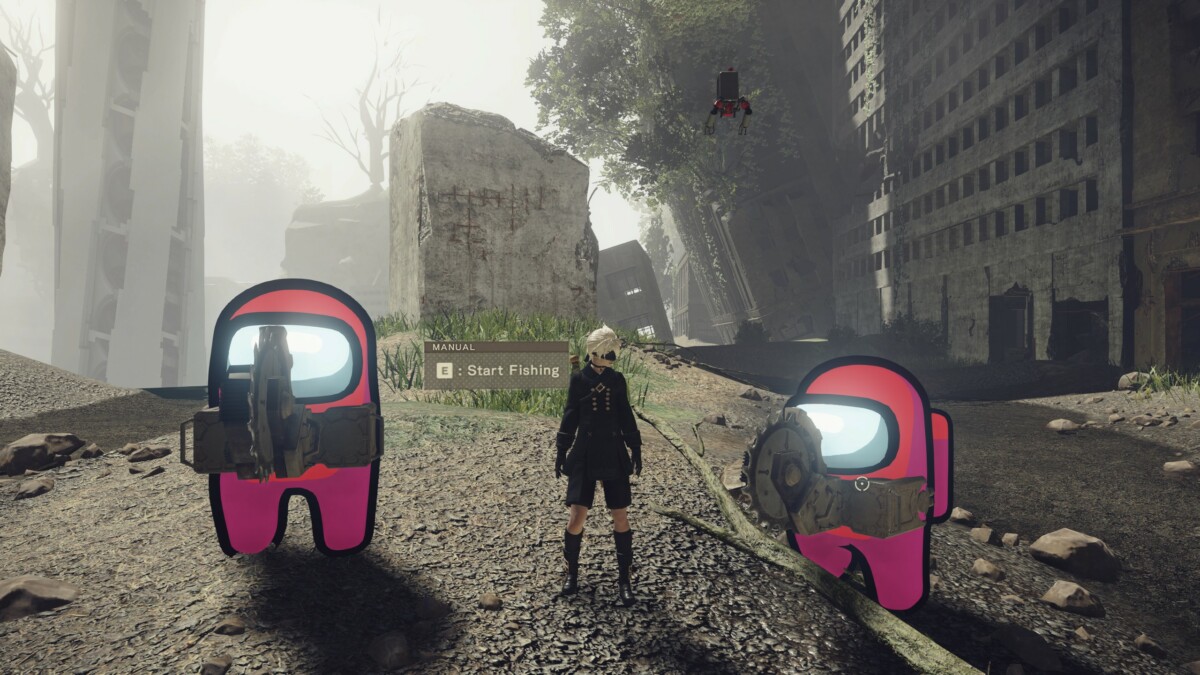 Amogus! This mod replaces all of the small stubby living machines with the red imposter from Among Us.

There was no other choice for the number one slot. Is it the fanciest mod? No. Is it a significant upgrade? No. If you’ve been on the internet lately, you know the importance of keeping an eye out for sussy behavior.

The sight of a group of imposters running around a katana-wielding 2B is one of the funniest things we’ve ever seen.

Leave this mod installed long enough, and playing the game becomes a surreal cultural experience. It is our favorite mod for NieR Automata by far.