The Elder Scrolls V: Skyrim is a massively successful RPG and the fifth installment in the Elder Scrolls series. The game (in its various iterations) has one of the largest modding communities of any game ever.

Bethesda has re-released the game a few times since the original 2011 launch, and much has changed in gaming since then.

VR, for one, has come a long way, and in 2018 we got to experience the world of Tamriel for the first time in virtual reality.

Here is our list of the 15 best mods for Skyrim VR, arranged in no particular order without further ado. 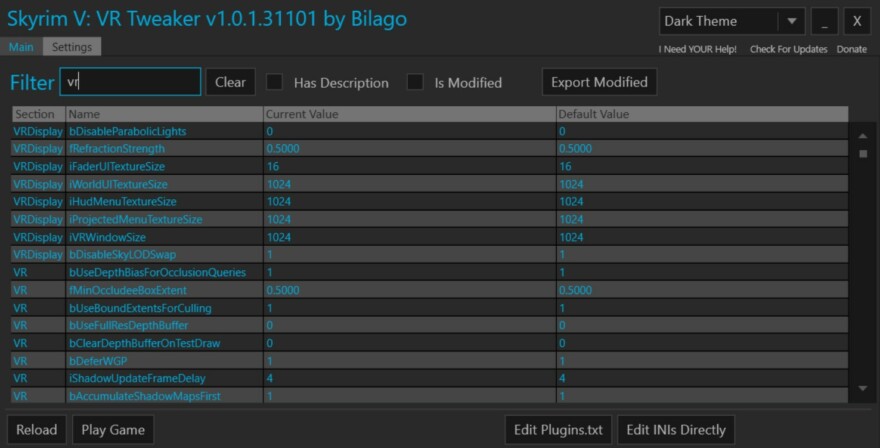 The first mod we’ll be taking a look at is a good utility mod called Skyrim VR Configuration Tool. This mod allows users to tweak their VR version of Skyrim from within this easy-to-use application.

This is a good alternative to the manual method of digging through folders and changing values in the .ini configuration files of the game.

This makes it a much more painless experience in the already tedious world of Skyrim modding.

Skyrim is great, but let’s not forget all the bugs gamers have to endure. The Unofficial Skyrim Special Edition Patch or USSEP is a community-made patch that fixes lots of little bugs and broken things in the game that Bethesda missed.

This mod is a compatibility patch for the latest versions of USSEP, allowing you to use it with Skyrim VR.

Eliminate lots of bugs and create a smooth gaming experience, we know you want it! 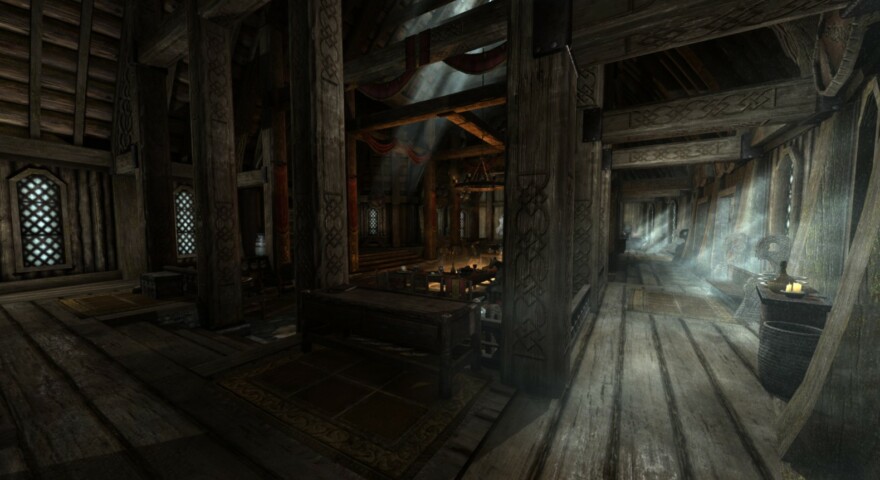 The very first time going into Skyrim, you will notice how the new world provides an immersive experience. Getting to experience it in VR adds a whole new level of depth to that experience.

Unfortunately, it is a rather old game by now, and from the visuals, it is apparent.

To help with that, we have Realistic Lighting Overhaul SSE.

This mod is a lighting overhaul that enhances both interior and exterior lighting with no post-processing making it incredibly performance friendly.

It’s amazing how much better a game can look with some convincing lighting effects. Give it a try, you’ll definitely notice the difference. 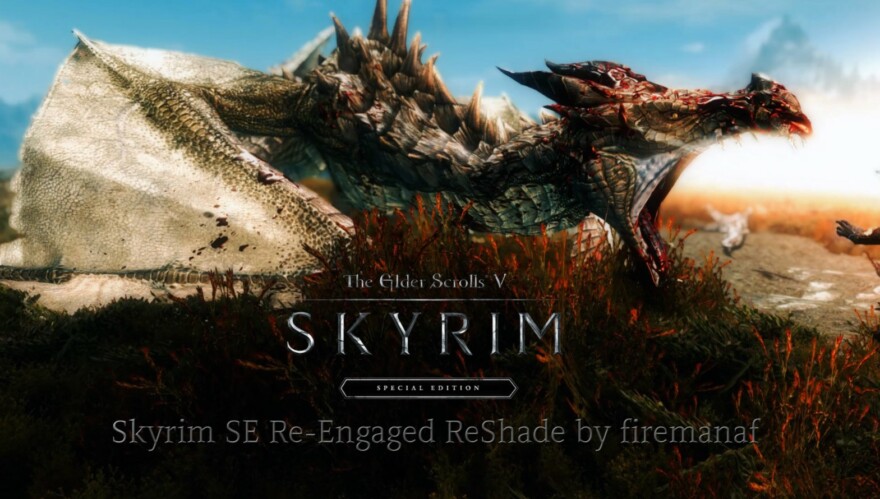 Now for some good old post-processing, SkyrimSE Re-Engaged ENB is the most popular ENB for Skyrim Special Edition.

The mod comes with various preset options to get the style you want to have for your Skyrim.

This goes a long way to bringing the game up to current standards, but be careful as they do take a toll on your computer.

If you’ve got good hardware, don’t be afraid to use this mod. The customization is worth the time and effort. 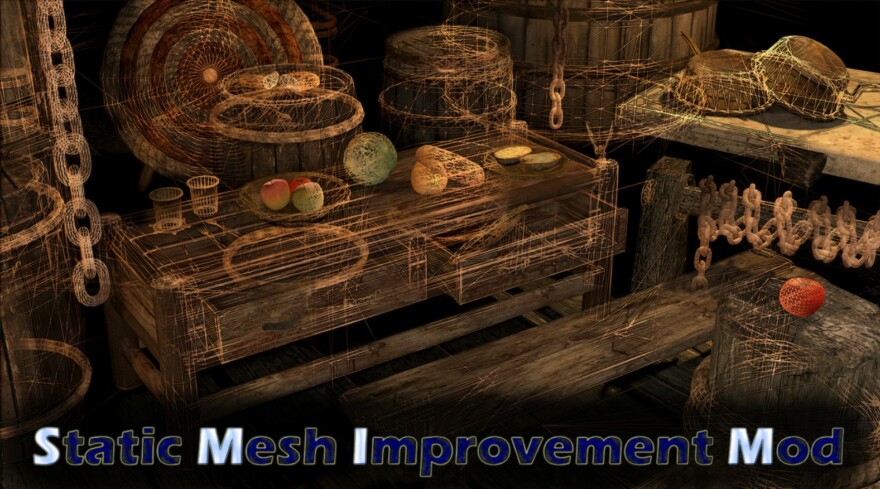 You get to see a lot of the Skyrim world up close and personal in VR. Unfortunately, Skyrim’s static meshes aren’t a great sight to behold.

The Static Mesh Improvement Mod seeks to remedy this by replacing the game’s static meshes (such as furniture, items, pieces of scenery, and more) with completely new, high-quality meshes that make the environments of Skyrim much nicer at close viewing angles. 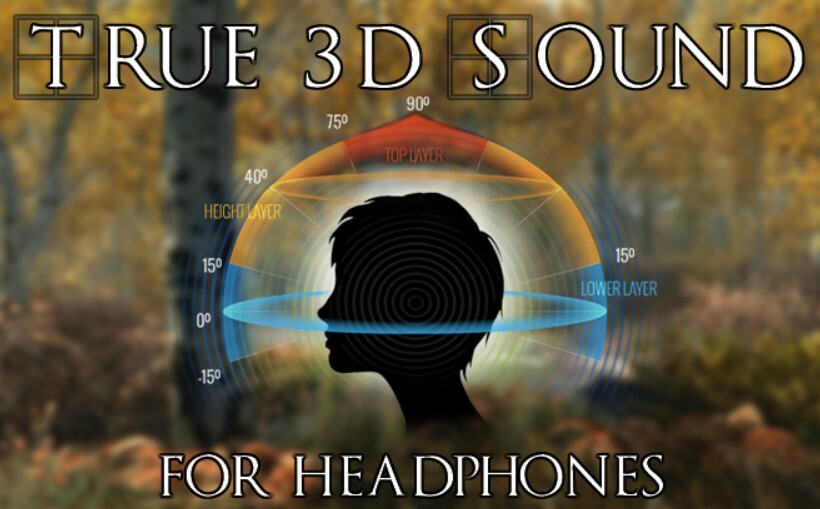 For some added immersion to the VR experience, we have True 3D Sound for Headphones which improves the sound environment of the game.

It helps give a more dynamic feel to the environment, and gamers can determine where the sounds are coming from. A great mod to always stay ahead of your enemies! 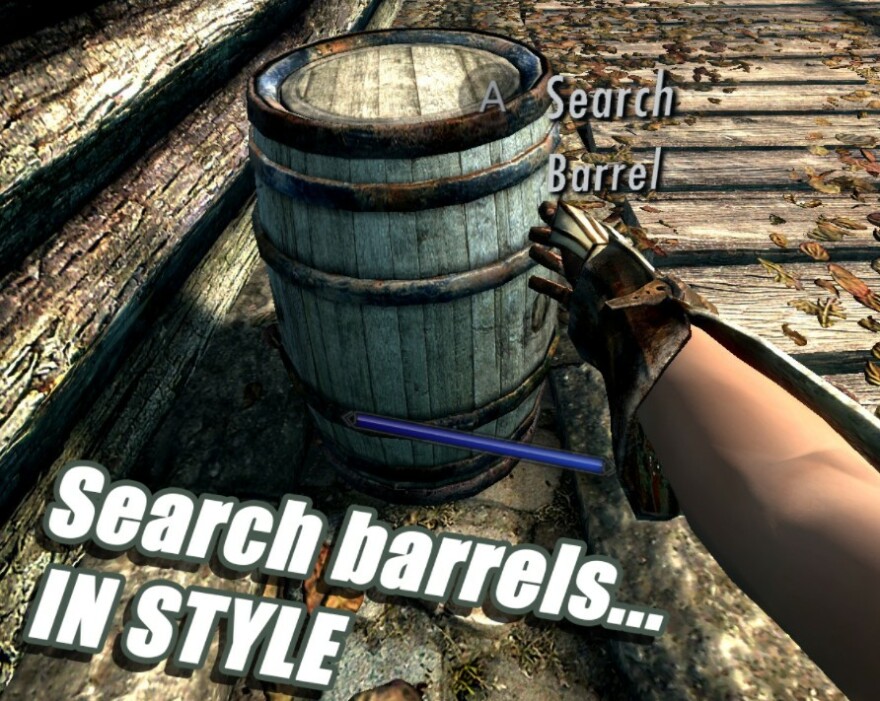 Getting to move around in 3D space in VR is pretty cool, but it can be a bit immersion-breaking in Skyrim VR when you look down to see that you are just disembodied hands.

VR Body fixes that. This mod adds a visible body to the player character in Skyrim VR.

This is compatible with many of the most popular weapon, armor, and clothes mods, letting you dress your Dovahkiin up in high-quality community content.

Next up are the NPCs.

VR gives more depth to your interactions with NPCs getting down to a more personal level with them. But they don’t look too good anymore in 2021.

WICO is a mod that overhauls the textures and faces of all characters in Skyrim.

This doesn’t just make the characters more attractive, this overhaul attempts to keep the vanilla style and feel while making them look more realistic and high quality.

The mod also adds high texture hairs and warpaint to the game. WICO helps bring the graphics up to today’s acceptable standards allowing for a great gaming experience.

The previous mods improve the look of the player, NPCs, and the objects in the environment, this next mod will help breathe some life into Skyrim’s settlements.

JK’s Skyrim is a compilation of the legendary JK’s city and town mods which were overhauls that looked to improve each settlement in this northern province.

The mod enhances all of the 5 major cities and 9 smaller towns and villages across Skyrim.

The improvements made try to mix up mostly exterior spaces and not interfere with quests and NPC schedules. You’re getting great structures and a lot of personality in the previously boring old settlements. It is a highly recommended mod! 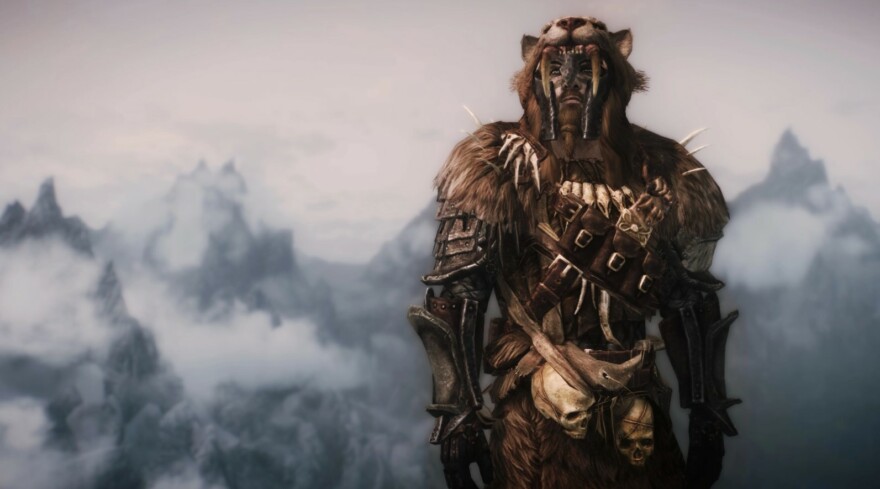 Let’s give you something cool to wear.

Immersive Armors is a mod that greatly enhances the variety of armor in the game while keeping it lore-friendly and authentic to the universe.

The armors provided have been balanced to help blend into the base game, making it feel natural.

The mod gives you some nice new pieces of armor to protect your Dovahkiin, as well as looking mighty fine while off on your adventures! 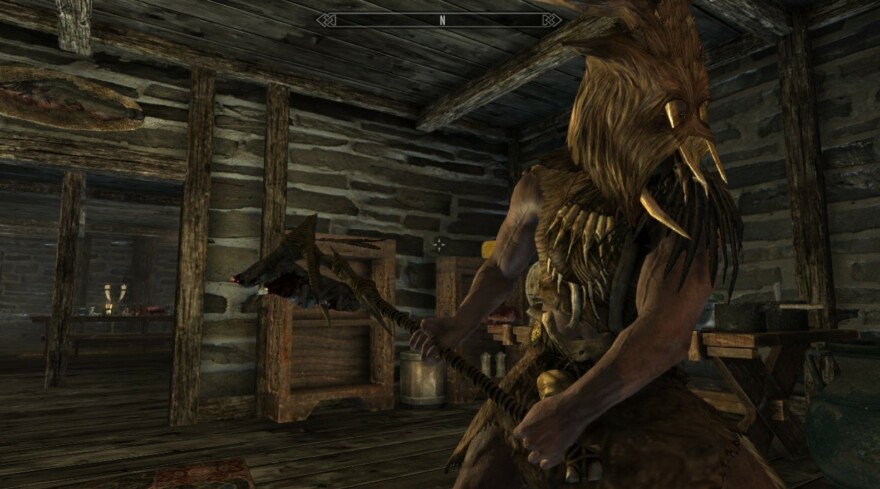 Now that you’re all kitted out in your sweet new armor, how about something to swing at your foes?

Heavy Armory – New Weapons is a mod that adds over 100 new weapons to the world of Skyrim.

It has everything from clubs to short swords, spears, halberds, and more.

The mod increases the variety of weapons globally and adds the weapons to leveled lists and stores. You can even personalize it by getting your skull caved in them. 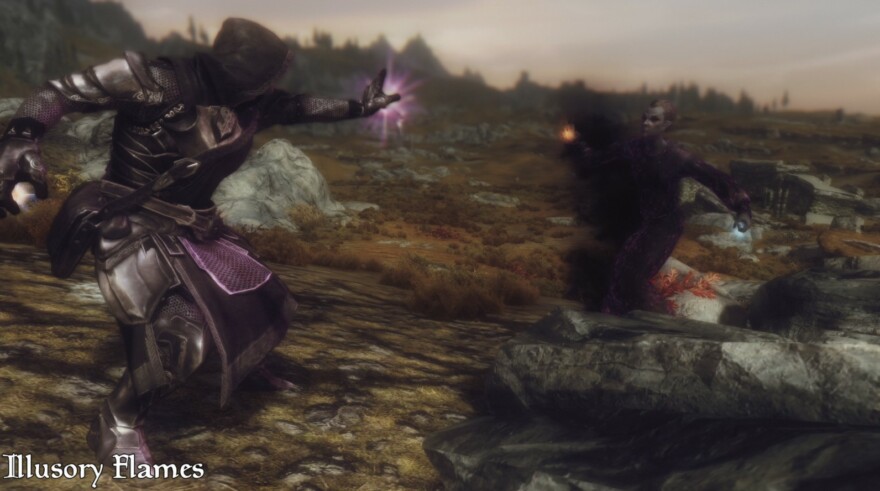 Since we’ve provided an ample supply of sharp and blunt implements in the previous mod for your warrior-type characters, this next one gives some love to the mages out there.

Apocalypse – Magic of Skyrim is a spell pack that adds 155 new, unique, and balanced spells to the game.

It adds a lot of variety to magic-focused characters, and gamers can spend time experimenting with their new builds. This is a must-get mod for all mage players out there! 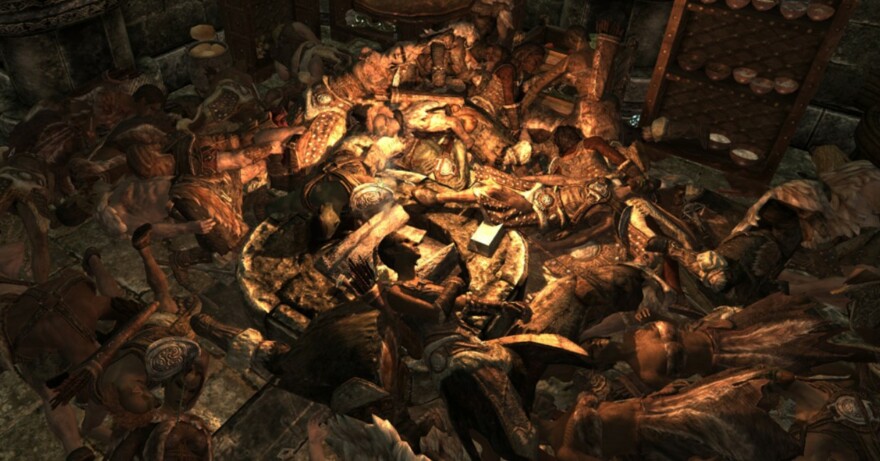 VR brings you up close to the action, but the death animations can take you out of it a bit. Realistic Ragdolls and Force is a mod that makes the ragdoll effect on dead NPCs more realistic.

Fights feel a little less “game-y” and more visceral. This is one of those mods that you should have in your collection of mods. 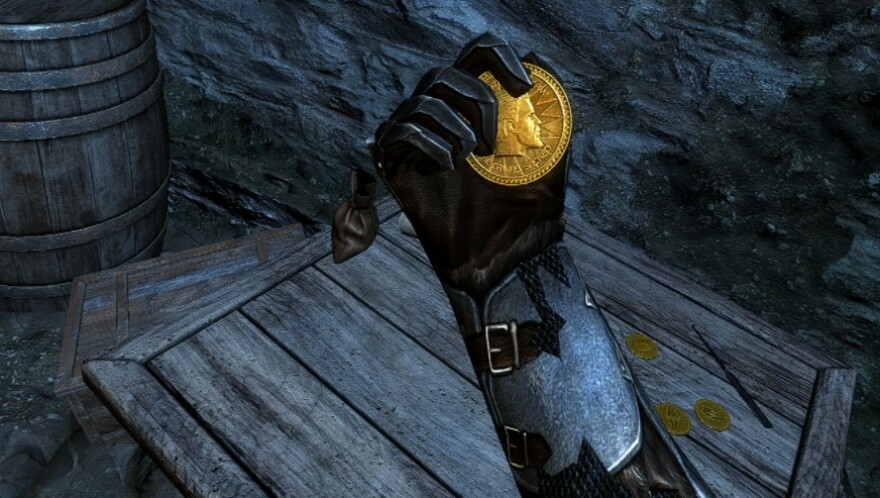 This next mod is made specifically for Skyrim VR.

HIGGS or Hand Interaction and Gravity Gloves for Skyrim VR is a mod that adds some nice VR mechanics to Skyrim VR.

This mod adds VR hand mechanics such as weapon and hand collisions, finger movements (allowing you to pick objects up with either hand), and much more.

The mods make the VR experience a bit more realistic and crazy fun as you start to explore the possibilities of what you can do.

This last mod is a plugin for SKSEVR that gives some haptic feedback on your VR controllers to help give you a better feel for your interactions in the game.

Spellcasting and Enhanced Bow and Melee Haptics is a plugin that adds haptic feedback to spellcasting, bow combat, and melee combat.

The mod makes the game more interactive as you’re able to sense things throughout your gameplay.