There are tons of underwater Pokémon out there now, to the point that the ocean of the franchise is now littered with critters from tiny to gargantuan.

Today, we’ll be discussing my personal favorite twenty-one fish Pokémon that you can catch or see in the anime.

Some will be obvious, some not so much, but either way, I hope you enjoy traveling deep under the depths of the Pokéverse with me in search of the cutest and creepiest and weirdest out there! 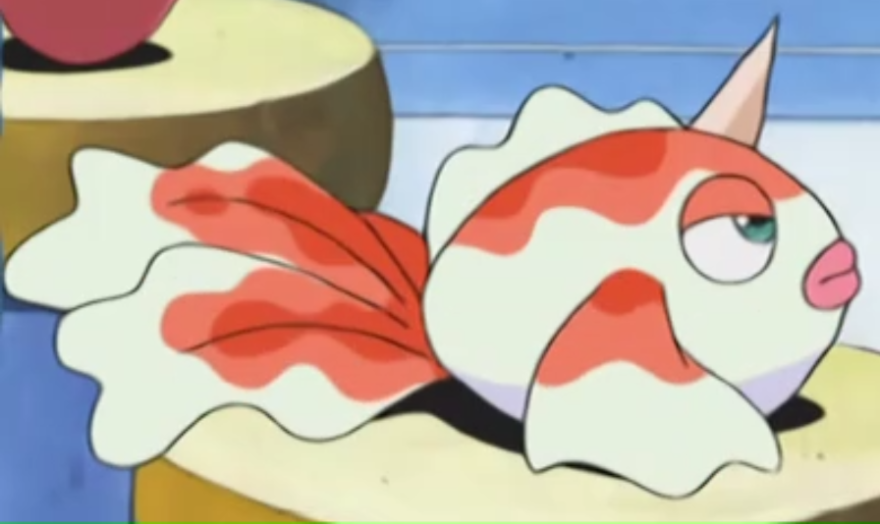 Resembling a goldfish, with a portmanteau name comprising ‘goldfish’ and ‘queen,’ Goldeen is a goldfish.

Do you like goldfish? We’ve got an iconic goldfish for you. Goldeen is a goldfish.

Nonetheless, it became a fan favorite over the years – likely due to nostalgia – and I will admit… I have a soft spot for this goldfish.

Also, they are reportedly fast swimmers, using their horn to cut through the current. So, that’s neat. 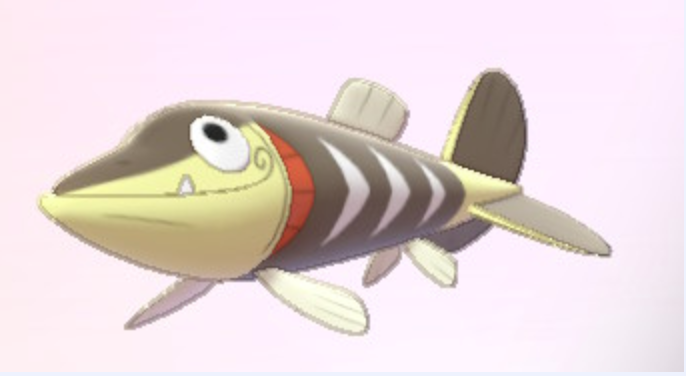 Based on barracuda’s and anchovy’s, but with a distinct arrow design, Arrokuda’s a lovable Pokemon.

It’s cute, earnest eyes and grin, with a tiny pointed tooth poking out the corner, is so utterly endearing that I felt guilty at the prospect of not including it.

It doesn’t help that it also has an awesome design, with three direction arrows and dorsal fins resembling an arrow’s feathers.

Sure, it evolves into Barraskewda at level 26, but I can’t help but love the first form more.

It’s also been seen used as a weapon by larger, more tactical Pokémon such as Cramorant in the anime. 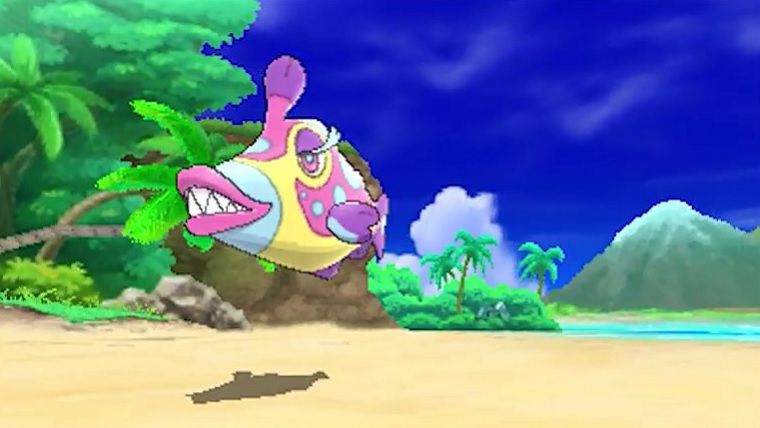 I stared into the face of Bruxish, and this is what He showed me.

Bruxish is the epitome of the grotesque, the antithesis of clean design, and yet – art! It’s got a pop color aesthetic with a yellow, pink, purple, and teal palette.

It’s sort of disgusting, with a creepy toothy leer and decadent fluttering eyelids making the Pokémon seem as though it’s proposing something to you.

Something you, perhaps, don’t want to hear. This is befitting their power, I suppose, as they use their spiritual capacities to intimidate their opponents into fleeing.

Nonetheless, truly an eyesore, and I love it. By the way, there’s a condition called ‘bruxism’ comprising incessant gnashing of the teeth—something to think about.

You’re going to notice a pattern here. Ahem! Luvdisc is a disc-shaped like a love heart, named as such because…

It is a disc-shaped like a love heart. In the springtime, they congregate together to turn the ocean a bright pink color and commonly live in warm seas.

They can briefly glide by kissing, their flat bodies providing the aerodynamics required for flight. Truly a unique specimen. 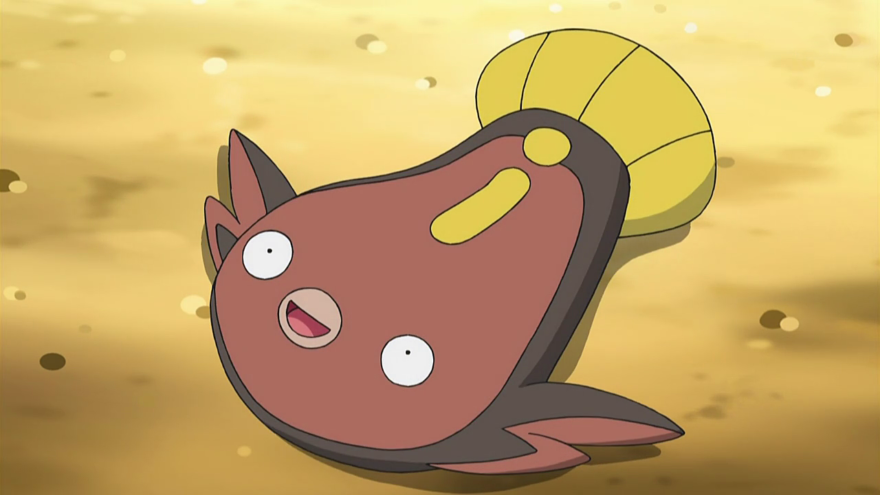 Stunfisk is a weird fish Pokemon, as it is a Ground/Electric-type based on flatfish and electric rays. But it also has a Ground/Steel variant.

It spends most of its time buries underground, and when something threatens it, they can create a small electrical discharge.

It was simple, unique, and strangely lovable – though unfortunately overlooked due to not being particularly powerful or having an evolved form. 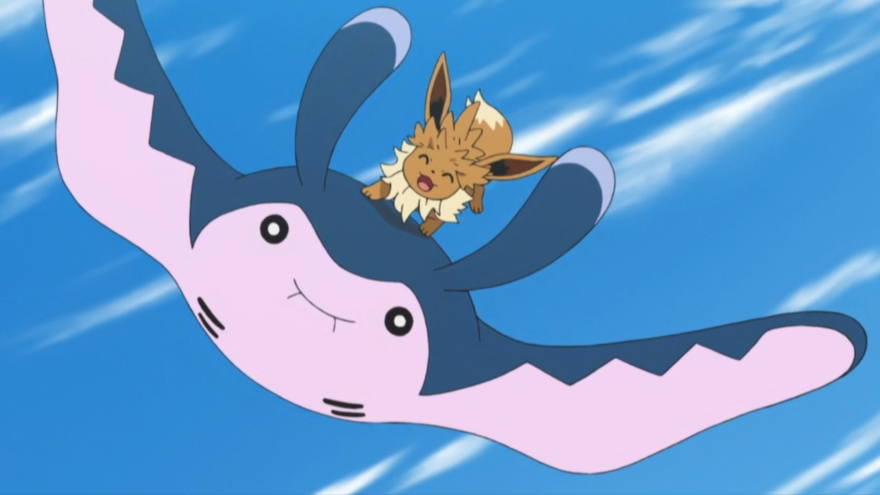 Mantine’s evolutionary line is unusual, too. It evolves from a Mantyke but only when there is a Remoraid in the party during level up.

It strongly resembles a manta ray – hence the names – and is often accompanied by the Remoraid it evolved with.

It’s speculated the Remoraid is a cleaner fish, there to assist the Mantine in hygiene, as they are both docile herbivores.

I love its cute design, which adds whimsical elements to the fins and antennae of the usual manta ray design.

It can also stand up for itself in a fight, though you won’t catch it competing in professional tournaments and often see it carrying trainers across the seas with a smile on its face. 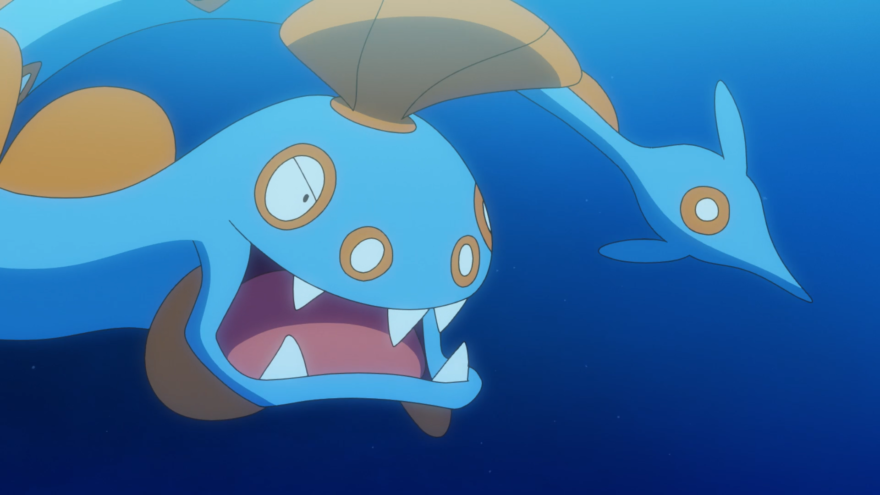 Clamperl was cute – Huntail is not. Let’s just get that out of the way: Huntail isn’t winning any beauty pageants, and I doubt he’s most people’s first pick at prom.

But wait! Give him a chance, and I’m sure his personality will win you over.

Let’s see: they often swim in the deep sea. Hence the large eyes – see, there’s an evolutionary reason for that gormlessly vacant gaze. What else?

It appears they have a largemouth in order to swallow its prey whole… Ah, that’s unfortunate, but every – Oh, and common superstition maintains that a Huntail washing up on a beach is a sign of misfortune?

Well… Okay, I guess Huntail is a bit of a monster, but maybe that’s why he stands out. 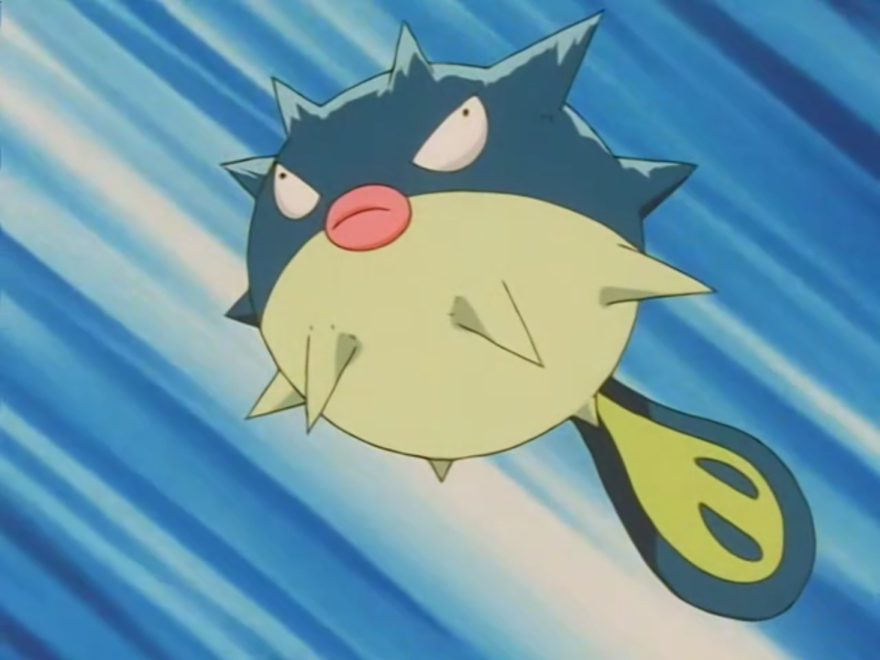 Is it any surprise that Qwilfish is a Poison/Water type? To attack, it firstly needs to absorb more than 2.6 gallons of water until inflated and then use the deflation pressure to shoot its poisonous quills at the enemy.

It’s part of the Balloon Pokémon family, known for their inflating abilities, but unfortunately cannot swim very well due to its buoyancy.

Despite its rather plain design, I can’t help but adore the simplicity paired with the determination on a Qwilfishes face. It will not go down without a fight – this is only the beginning… 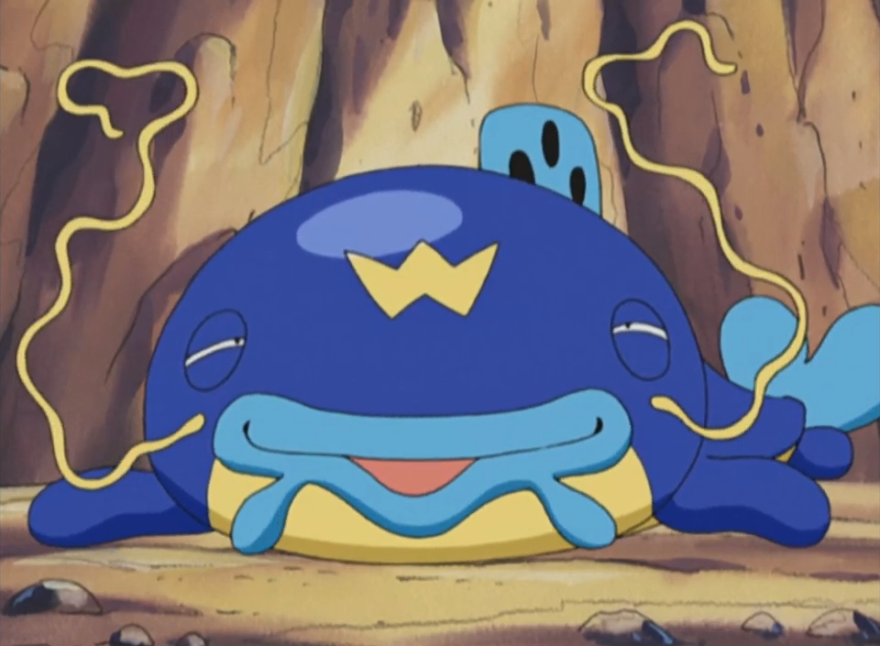 Look at that goofy face! Look at it – the wide space between the eyes, the simple drooping mouth curving into a satisfied smile, the curly whiskers sprouting from the sides.

It’s even got a little emblem marking on its forehead of a ‘W’ similar to a crown!

Despite what may appear to be a throwaway Pokémon, there’s obviously been a lot of care taken in its design.

It certainly stands out, and encountering it is always pleasant even if it isn’t anybody’s favorite Pokémon.

Nonetheless, it’s a frightening creature capable of creating earthquakes over three-miles in range and often live at the depths of swamps waiting to eat anything – alive or not – that might swim within its territory. 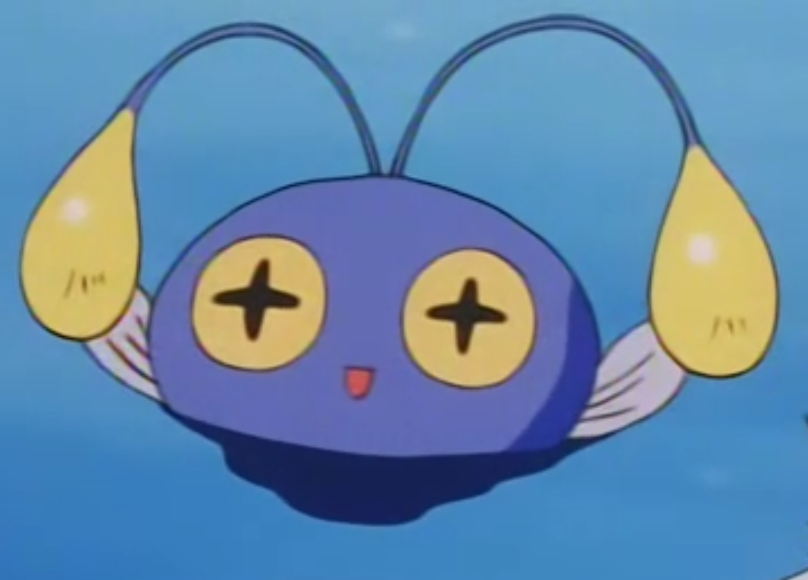 Chinchou is rather blatantly based on the anglerfish and has an adorable name perfectly befitting its cute design (apparently a play on words for ‘lantern’ in Japanese).

It’s remarkably small – at only 0.5 meters and weighing 12.0 kilograms – and features large yellow glowing eyes with plus signs in the center and antennae ending in glowing orbs.

It embodies the Water/Electric-typing it was given, floating seamlessly through the current yet capable of withstanding a powerful zap it can inflict upon the surrounding environment.

It’s nonetheless carnivorous despite the size and attracts prey via the glow of those orbs close to the deep dark ocean floors. 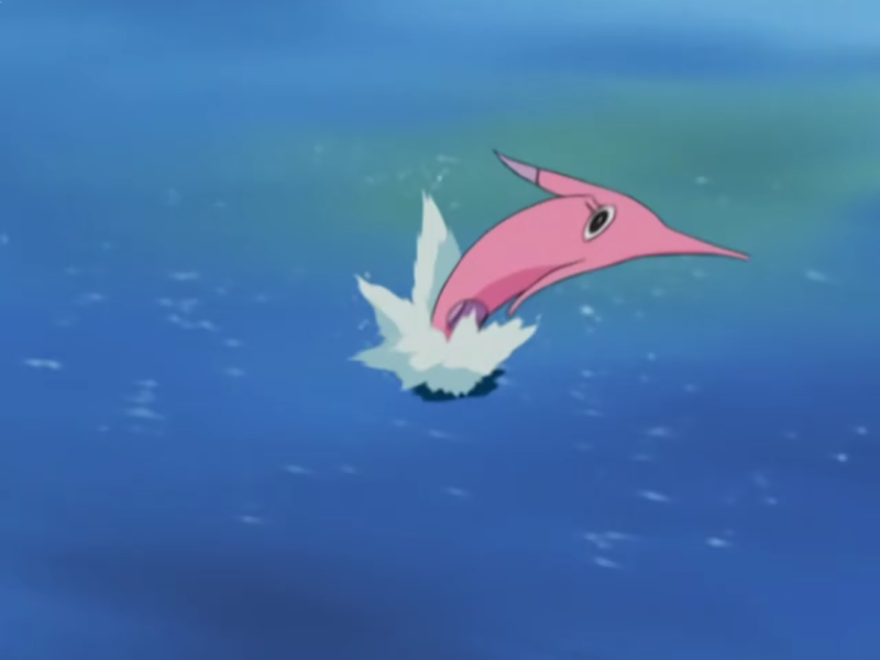 Gorebyss is a majestically beautiful creature, with a sleek pink, white, and purple design reminiscent of Luvdisc and Sylveon.

It evolves from Clamperl, just like Huntail – except instead of becoming a goody Mohawk eel thing, it becomes this beautiful creature.

It’s serpentine, like a snake or eel, and moves through the ocean in a rhythmic way.

Despite its cutesy appearance, it can use the pointed mouth/snout protruding between its eyes to drain the bodily fluids of a life form until its drained dry.

So, you know, don’t pet one. Even its name is foreboding… 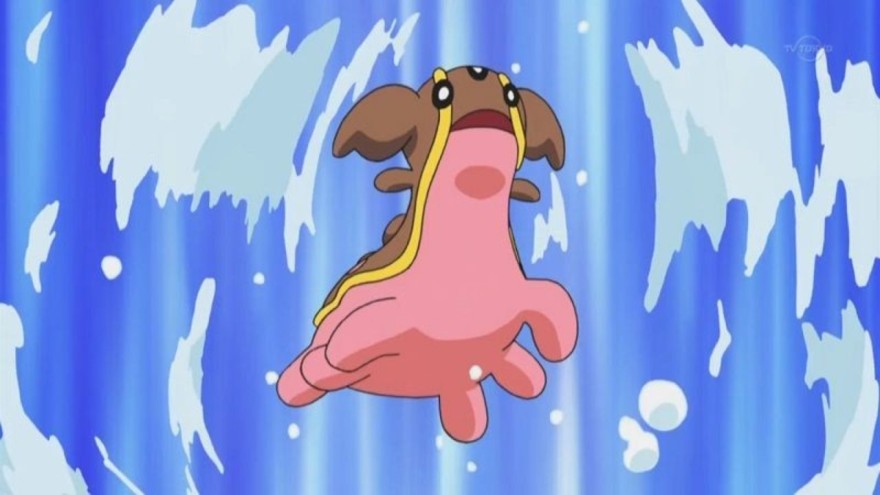 Gastrodon, and their devolved Water-type form Shellos, are slug-like Pokémon (Gastrodon has a Ground/Water typing).

Depending on the coast they reside in, their appearance is almost mirrored from pink and white/brown to blue and green.

Needless to say, mix shiny variants into the equation, and there are quite a few types of Gastrodon/Shellos roaming Sinnoh.

They can regenerate remarkably fast and often live in shallow pools, eating plankton.

They can’t stay on land for too long due to dehydration but are known to hunt on occasion.

They are, therefore, quite docile herbivorous Pokémon reflected in their soft pastille designs. I hate slugs in real life but, honestly? These guys are cute… Don’t know if I’d ride one, but… 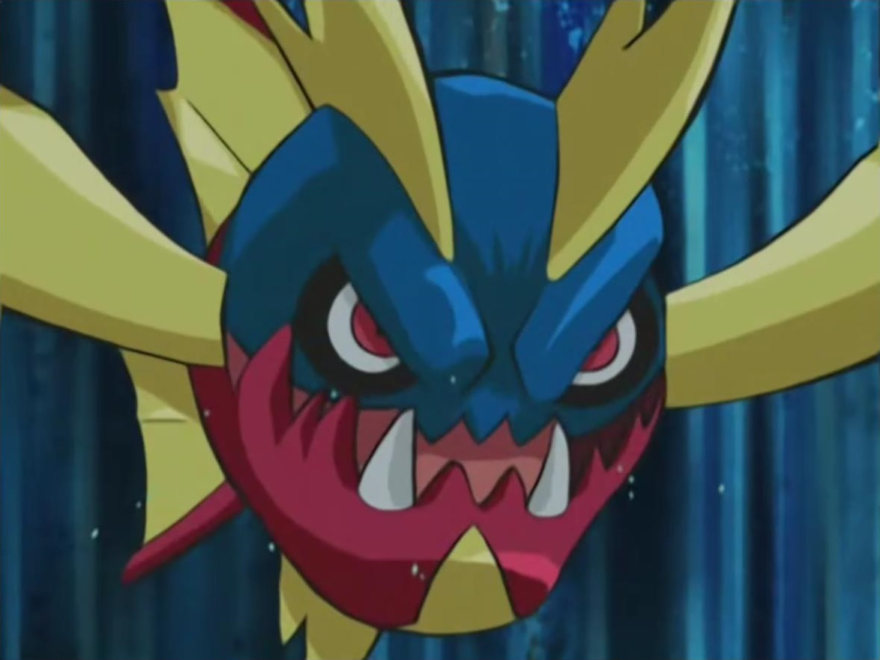 No Pokemon has suited the Dark/Water-type more than Carvanha, its name a portmanteau of ‘carnivore’ and ‘piranha.’

It packs a punch for a first-tier fish Pokemon, though it has one of the lowest defense stats in the game.

Nonetheless, it is made of spikes and jagged contours. The design resembles a piranha and a shark blend, but with a red/blue/yellow aesthetic and narrow menacing eyes. 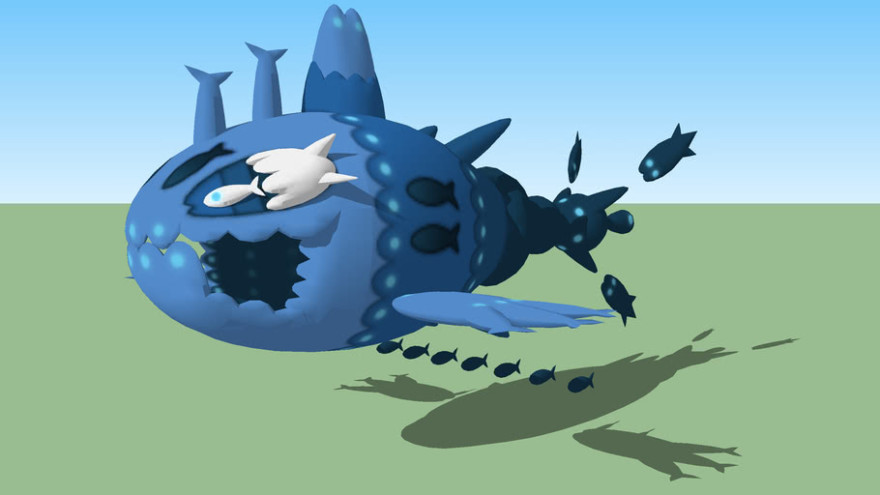 Wishiwashi’s not only got an amazing name but it’s also got an incredible design.

The teal, cerulean, and grey color palette matched with the mundane downtrodden expression makes it an iconic, relatable fish Pokémon.

Wishiwashi is unique in that past level-20 they gain the ability to change forms via Schooling, making it a truly Lovecraftian creature manifested out of hundreds of Wishiwashi as long as its HP is above 25%.

Both designs look amazing, and it stands out as a truly unique fish Pokémon.

However, the base form has some of the lowest stats in the game, compensated only by its School form. 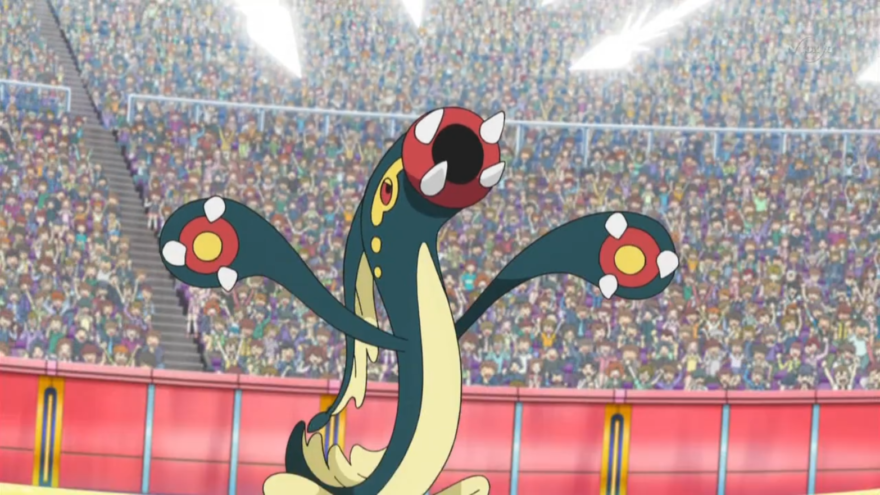 Eelektross has a fascinating design, resembling a mixture of electric eel and a parasitic leech.

It climbs out of the ocean, using its large sucker-ended arms with claws and latches onto any passerby before dragging them into the ocean.

It has a truly horrifying design, much like its previous form Eelektrik – quite surprising considering the initial tiny form of Tynamo. 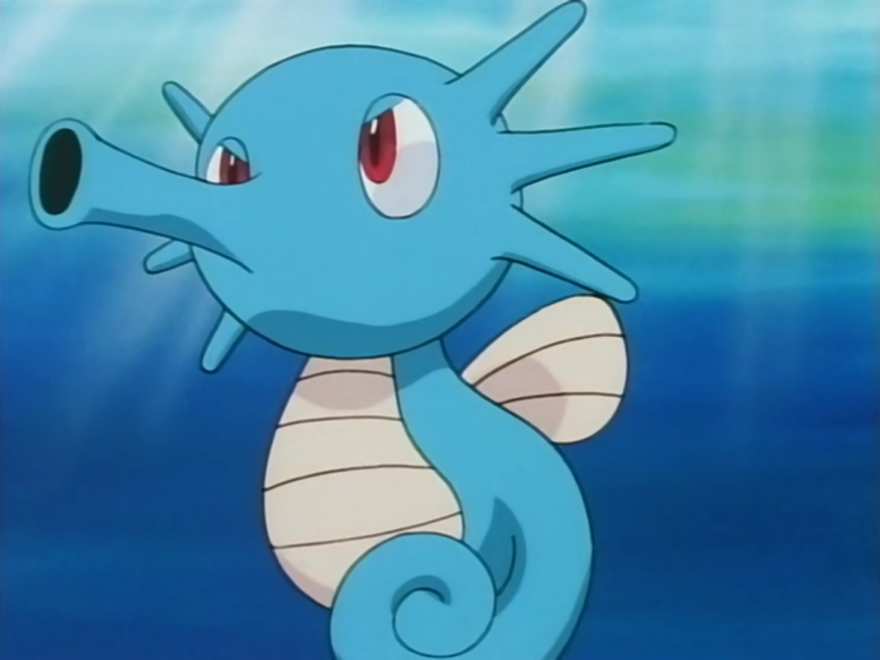 One of the most iconic Water-type Pokemon due to its companionship with Misty in the original anime, Horsea has a simple yet elegantly whimsical design.

The small angelic wing dorsal fins on the back, tiny curled tail, and striped underbelly, accompanied by its plump plushy design, makes it intrinsically cute.

Horsea’s namesake is, if you would guess it, the Seahorse. I know – startling. 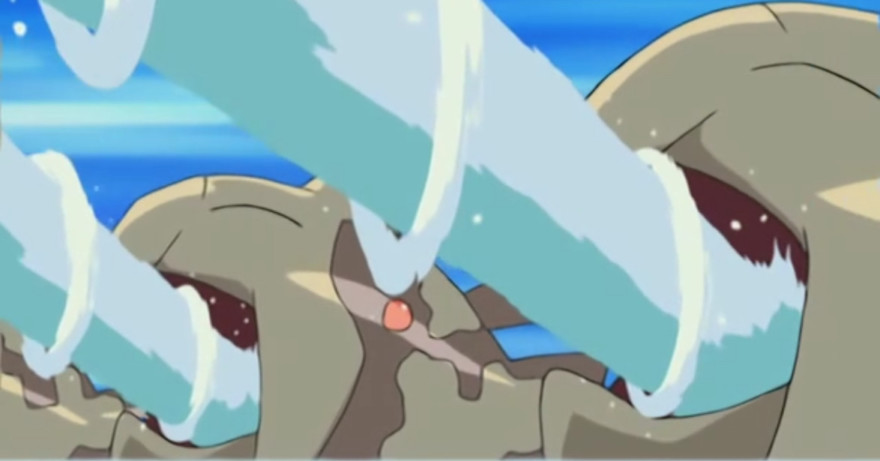 Relicanth is a fossil Pokémon in everything but classification, being a Rock-type with a similar gender ratio, and often referred to as ancient or a relic.

They are inspired by the recent discovery of the coelacanth, referred to as living fossils, and previously considered extinct for 100-million-years.

Relicanth’s live in the deepest parts of the ocean but can resurface on occasion.

It has an awesome, alien design and is one of (though not the) oldest recorded Pokémon chronologically.

Due to its significance in both the real world and the franchise, Relicanth is an endearing Pokémon and one of my favorites. 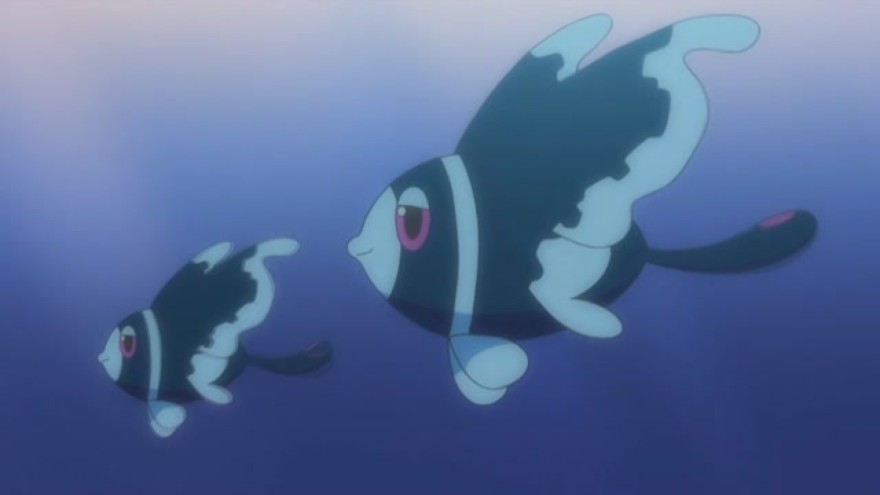 It’s a small neon-tadpole fella, how can you not like that? The design is simply beautiful, with the purple stripe along its side storing sunlight to produce dazzling rivers of light in the dark.

Its tail fins resemble butterflies, too, adding asymmetrical sublimity to its design. One of the unique simple stage-1 fish in the franchise, brimming with personality and wonder. 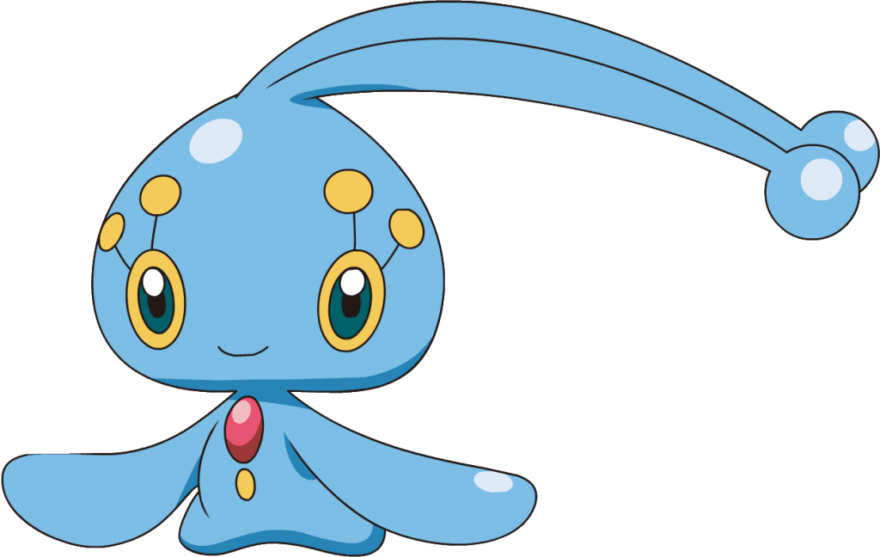 Manaphy are based on sea angels, small transparent sea slugs, in all but design.

Made almost entirely of water, Manaphy is extremely buoyant – making it a fantastic ball to play sea-volleyball with.

It’s a Mythical-type Pokémon and a member of the sea guardians, alongside its mutant offspring Phione.

But also – just look at it! Ain’t it cute? Look at its little penguin flipper arms! Simply wonderful. 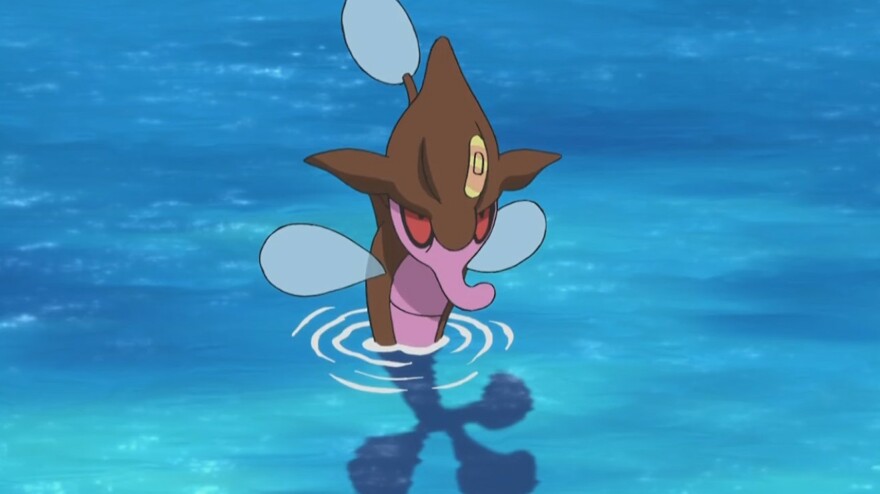 Dragale evolves from Srelp at level 48, and wow, does it look cool. It’s got a sea dragon inspired design, with a main brown color adorned with a red crest and green antennae.

It looks truly alien, something from deep underwater, and its territorial attitude mirrors the aggressive appearance it has.

The name is a mixture of dragon and algae, as the latter is what it primarily eats – thought it will engage in skirmishes for space and resources if need be, and can even spit greatly acidic poison. 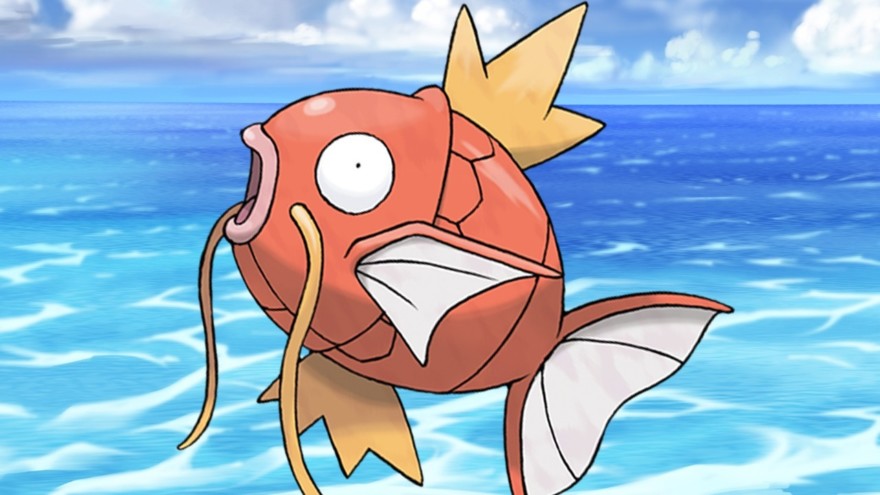 Does our pathetic little orange guy need any introduction? It’s vacant, forever staring expression. That gormlessly lovable mouth is gaping for all of eternity.

It’s one of the most well-known Pokémon around, an anthropomorphism of potential.

For though it may splash ‘pathetically’, it is secretly… Biding its time, waiting to evolve and unleash all its fury on those who didn’t believe in it.